A respectable neighbor of Kashan called the Abyaneh Village has red-stepped homes and mud-brick lanes on the hillside of the magnificent mountains(Kashan tour). Each Iranian would take pride in seeing Abyaneh village and preserving a snapshot of it in his or her book since it is a must-see village in all of Iran that one […]

Abbasi House of Kashan – An Aristocratic Day in Kashan

We would love to ask you to join Tappersia, today. And walk with us to the Abbasi House of Kashan. It is one of the historical attractions of this city. They call it the masterpiece of Iranian architecture. And for sure, it has attracted the attention of many tourists. With its inner rooms and special […]

Top Things to See and Do in Kashan, the City of Rosewater

Today we are going to learn about the top things to do in Kashan. This beautiful and lovely city has a lot to offer. So don’t miss it.

Kashan is known for its stunning architecture, beautiful historical houses, and colorful carpets. But it has another astonishing yet different tourist attractions, especially for photography enthusiasts. With the efforts of Hosein Farmani, in 2019, they opened Steve House to not only exhibit Steve McCurry’s marvelous photography but also to introduce local people and tourists to […]

Kashan, the city of marvelous historical houses and beautiful gardens has so much to offer. Aside from all the beauties like Boroujerdi House, Tabatabei House, Fin Garden, Sultan Amir Ahmad Bathhouse, and Steve House which are only some of the innumerable sites Kashan hosts its tourists, there are religious touristic attractions in Kashan as well. […]

Fin Garden; An Evocation of Heaven

Wondering What Might be a PERSIAN GARDEN?! One of the features of astonishing four-season Iran is its magnificent gardens. Truth be told, the garden may not be a suitable term for them. There are more of a piece of heaven -or as they put it “Eden”- on earth. Garden in Persian architecture is a huge […]

Looking for a place to immerse in the heart of the local’s people lifestyle? Wondering how they may spend a day? Try Persian Ancient Markets known as Bazaar. There are too many historical, local, and authentic things awaiting you in Persian Bazaars. Specific architectural features observed in building Persian bazaars, they consist of various parts […]

Do you find new modern spas fascinating? Well, to be very honest they are not that much of new technology; Iranians -same as Greeks- had some large bathhouses called Hammam that had quite facilities for people. Persian Hammams were not limited to a small bath but was a large one with various sections. Bathing was […]

Kashan; House of Historical Houses  If you are more of a culture seeker, roaming around houses might be the most fulfilling experience in which you get the opportunity to see where and how the local people lived. Houses are the best representative of the culture behind a city and help you know the exact personality, […]

Walking through this historic house full of memories, feelings, and character can take us to 19th century Iran. It’s like a trip back to the past time and feeling the authentic atmosphere of old residential areas. Boroujerdi House is just one of the must-see houses in Kashan, Isfahan Province. Some of the other attractions are […]

Aside from the archaeological masterpieces of Kashan like Historical Tabatabaei House and Ameri House, the magnificent Kashan Bazaar, and the mesmerizing Agha Bozorg Mosque, Kashan has still wonders and surprises to offer. If you are more of a traditional person who misses the times when everything was simpler, Kashan Toy & Puppet Museum takes you […]

Kashan, a 7,500-year-old city, is one of the most popular tourist destinations in Iran. And It is one of the oldest human social settlements. This beautiful and lovely city has greatly contributed to the development of the country’s tourism industry. Kashan is a city of fragrant flowers and historical houses, a city of historical and ancient attractions, a city of natural and beautiful sights, a city of traditional and ancient rituals. What archaeologists say indicates that this ancient city is actually one of the oldest cities. Meanwhile, the traditional and historical context of this city is still preserved and you can see traces of ancient history in the face of the city.

So let’s have a quick review of the top attractions in Kashan; 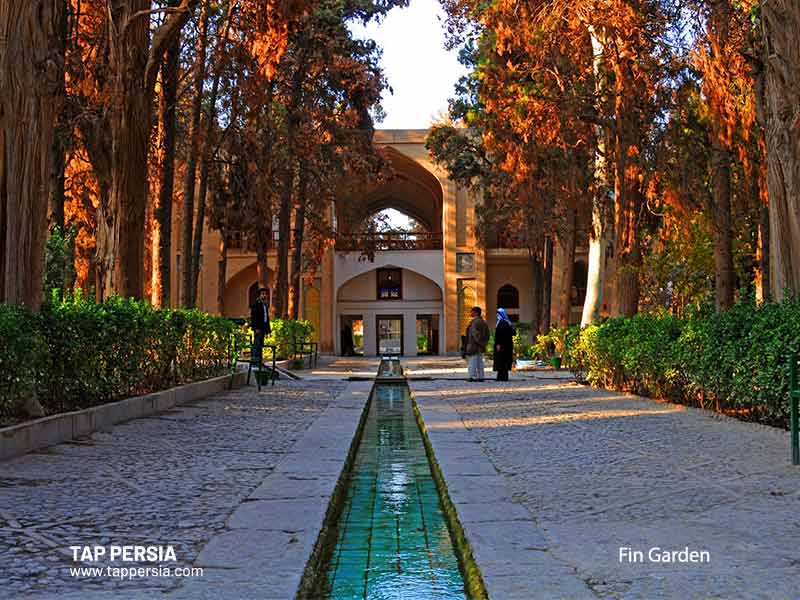 One of the most famous and beautiful places to see in Kashan is Fin. This garden is a perfect example of Iranian gardens. Fin  is very important and valuable from a historical point of view. This place has an eye-catching area.

In the city of Kashan, there are two important and historical bathhouses, which are located in the southern part of the garden; the large bath, which was called the royal bath, and small bath, for the servants. It’s the royal bath that has stunning decorrations and structre.

One of the most beautiful bathhouses in Kashan is the Sultan Amir Ahmad Bath located on Alavi Street. They built the original building of this bath during the Seljuk period. They call it so its proximity to Sultan Mir Ahmad Shrine. of course, the current building of this bath is related to the Qajar era. The roof of the bathhouse is dome-shaped, on which there are convex lens glass to provide the light and privacy, as well. In this bathhouse, there are two large and small bathhouses. Finally, one of its unique features is the amazing plastering that has 17 layers of restoration. 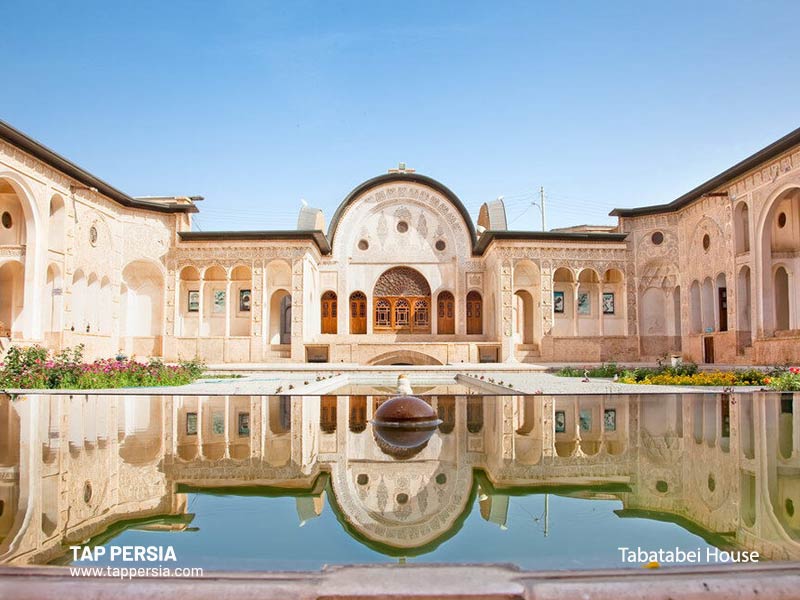 The owner of this house was Seyyed Jafar Tabatabai. He was one of the Kashan carpet traders and built this house in an area of ​​4700 square meters. He built the house during the reign of Naser al-Din Shah. And its construction took about 18 years.

Tabatabai’s house has forty rooms and benefits from four courtyards. Also, there are three windcatchers and two Qanats along with four basements in the house. The royal room of the house is actually the most beautiful part of it. It has latticed and colored windows. Additionally, its stucco and mirror works dazzle the eyes of every viewer.

The traditional Bazaar of Kashan belongs to the Safavid era. Kashan Bazaar is one of the most beautiful and prosperous traditional markets of Iran and one of the attractions of Kashan city. This bazaar has attracted the attention of many historians and tourists in different periods. One of the most important buildings in this bazaar is Mesgarha and Farrokh Khan Amin al-Dawlah Ghafari building. Still, it has pereserved its good and unique design. After this part of the bazaar, the next most famous one is the Zarrab-khaneh Bazaar.

The architectural feature of Boroujerdi’s house, in addition to its indescribable beauty, is its efficiency. The Boroujerdi house is the result of Seyyed Mehdi Natanzi’s love for the daughter of Haj Jafar Tabatabai. And in fact,, it was a gift for the newly married couple. That’s why the house has traditional and very beautiful decorations. 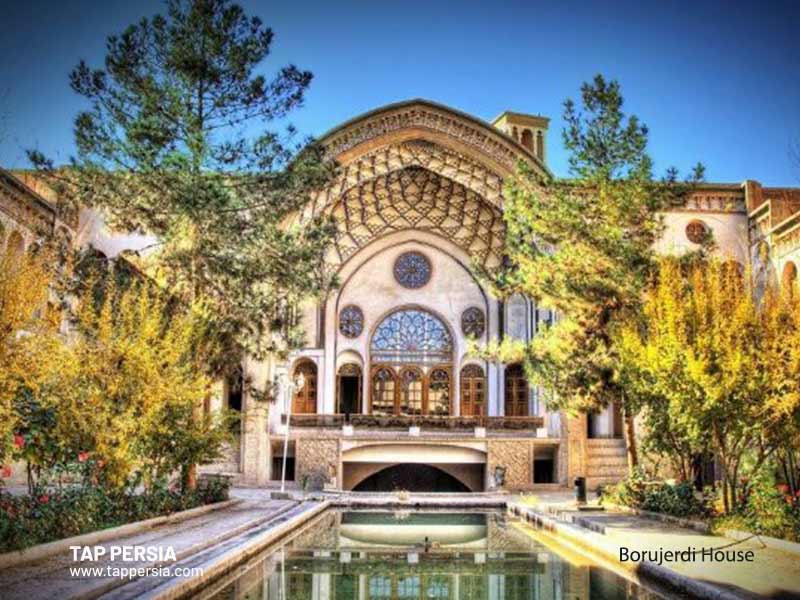 The Windcatechers are as one of the most important distinguishing features of this house. They built them in a similar manner to the crescent-shaped architecture. Not onlt are they beautiful, but they helpe to ventilate the building. Anyway, this house is one of the most unique architectural masterpieces in Kashan. The royal room of the house is actually the most beautiful part of the house, which has latticed and colored windows, and its stucco and mirror works dazzle the eyes of every viewer.

Maranjab desert is one of the tourist attractions of Isfahan province and it is located in the north of Aran and Bidgol city, close to kashan. This desert reaches Mesileh salt lake in Aran and Bidgol from the north.

The name Maranjab is taken from the historical caravanserai and Qanats in this area belonging to the Safavid era. This desert is one of the best options for desert trekking for tourists and desert lovers. And it is actually one of the main poles of desert tourism in Iran.

The underground city of Noushabad was the capital of Sassanid King, Anushirvan. It is lying in the north of Kashan city, 10 km away. This city which has a history of 1500 years, was discovered accidently in 2006. It was when one of the residents of the city was digging to build his house. In fact, Noushabad city is a series of nested corridors. 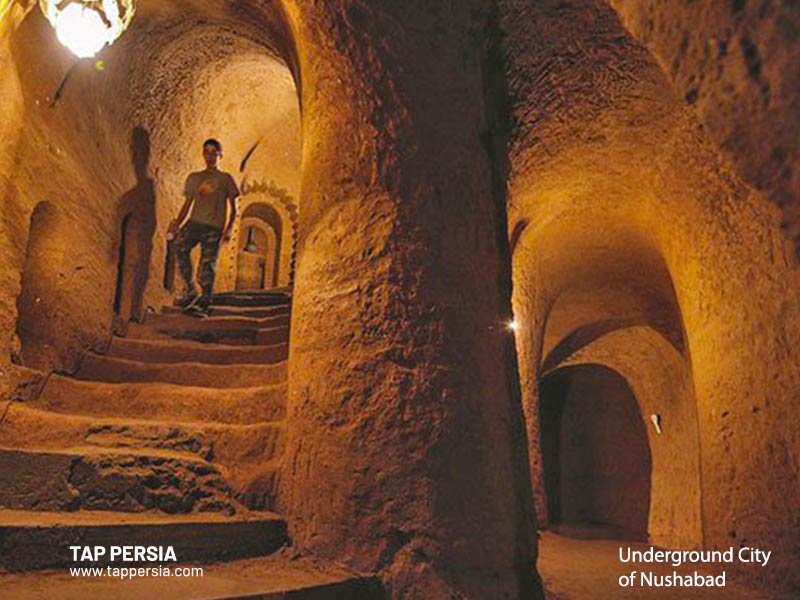 They used this place as a fortress and shelter during an enemy attack. This underground city is one of the important attractions of Kashan and one of the religious places of the city. This attraction is completely man-made and has a depth of about 18 meters. However, it has a width of more than a thousand meters.

Many tourists believe that this house is the most beautiful old house in Kashan. And plus Alavi Street of Kashan ows its glory and beauty to this house. This house has five yards. The house is built below the level of the street so that its inhabitants can easily access the water of the Qanat. At the same time, due to the materials used in the building, which are insulated, the house is protected from cold and heat.

This beautiful house is covered with awesome architectural art, full of attractive and beautiful stucco work.

Puppet & Toy Museum ie established in an old Qajar Mansion. When you enter its atmosphere you feel different. It like it makes you happy. Here you can see the most memorable toys of childhood in the past. The old handmade  provoke the beautiful memories of the old days for the Iranians. They have turned some of the rooms of the mansion into tourist accommodation. Moreover, at night, they hold group games in the yard.