The art of every country presents the general attitudes and emotions of its people. As the taste of each nation is different, they find a similar sense in producing the art. You can easily feel the same atmosphere and theme in their artworks. Amazingly, music origin is also recognizable if you’re familiar with the style. This includes Persian traditional music which has its own unique rhythm. And what plays a vital role in its tune are absolutely Persian musical instruments.

Development of Persian Music Throughout History

The first improvements happened in Sassanid Era. People started growing fond of music and they used to play it in their rituals. The most famous artisans are Nakisa, Barbod, and Sargash. Barbod is the one who invented many Persian musical instruments.

Music also roots in different tribes of Iran. They have had their own folk music for a long time. There are Azari, Kurdi, Khorasani, Gilani, Mazani (Mazandaran), Baluchi, Khuzestan and Hormozgan music styles. Special songs are synced to every type too. They sing them while weaving carpets, harvesting products, or working in bazaars. Also for rituals and ceremonies, people play their music on certain days and times which makes them unified and reminds tribe relations. Here are 10 famous Iranian instruments with some description: 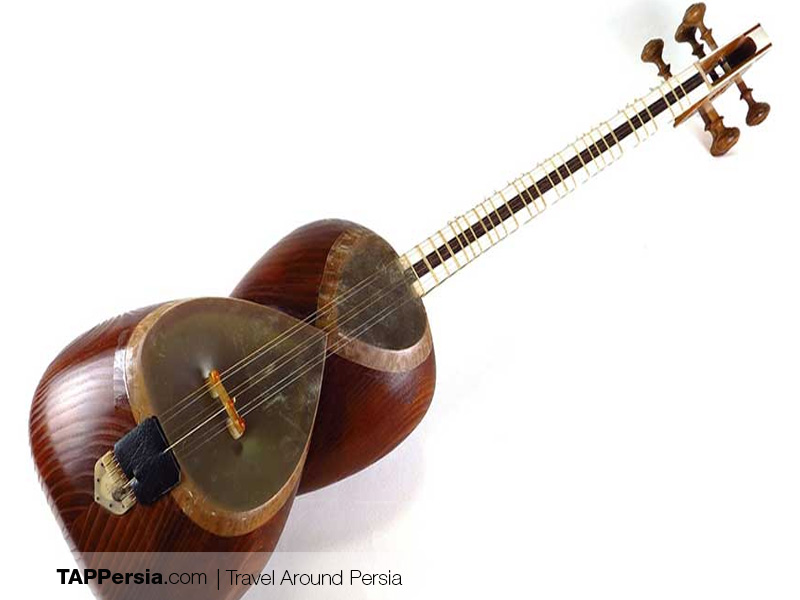 Tar is the name of one of the most applicable and well-known Persian musical instruments. It literally means string in Persian. This instrument was first formed in the Middle East in the eighteenth century. We can say that Tar is from the lute family but with frets and six strings; Five strings are steel and one brass. They carve mulberry wood to shape Tar’s body which is similar to a double bowl. You can also observe a thin membrane of sheepskin, stretched at its end. There are about twenty-six frets over its fingerboard and they play the strings with a small plectrum. 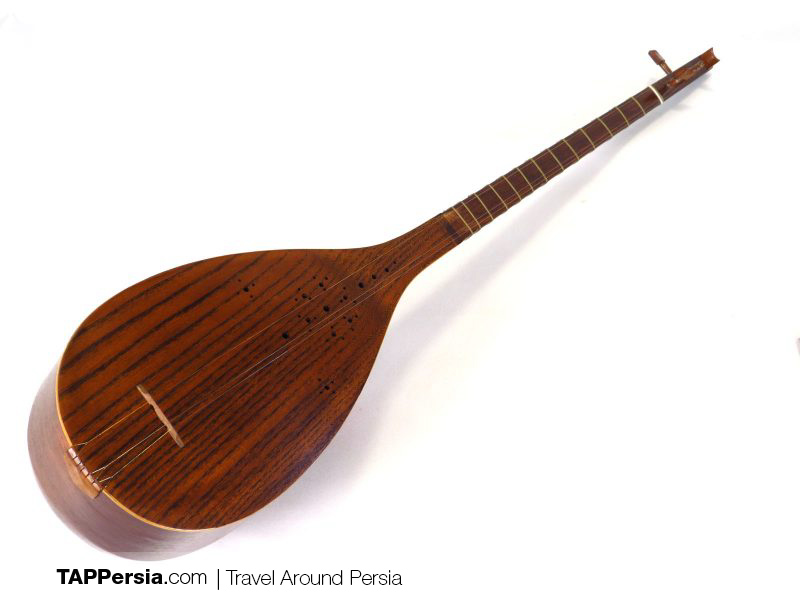 Tanbur (Tambour), another Persian musical instrument, is shaped from mulberry wood. It has a long neck and a pear-like shape. The soundboard is three or four millimeters thick, also made of a mulberry layer. There are some holes over it for a more qualified resonance. Tanbur has four strings and fourteen chromatic, gut frets.

The player needs to use all the fingers of the right hand to play Tanbur. Of course, there are different ways of strumming the strings, in which mostly the index and pinky fingers are involved. Tanbur enables the musician to make different rhythms and natural sounds including bird whistling, waterfall, and stream. Nowadays it’s more common for sacred music in the west of Iran. 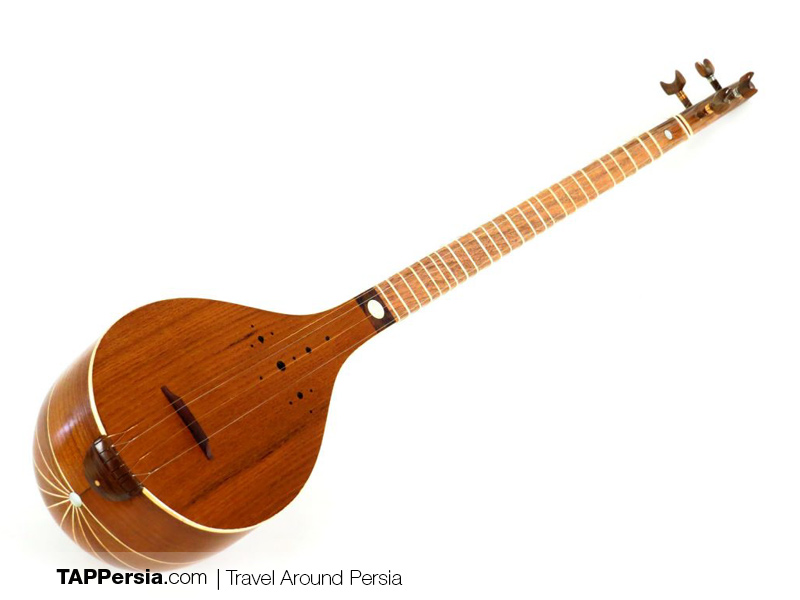 Setar originates in ancient Tanboor of old Persia. As it’s mentioned the word “Tar” is the string in Persian and Setar literally means three strings. However, you can also find it with four strings; Two steel strings and two brass ones. The fingerboard of this Persian musical instrument has 25-26 gut frets.

This soothing sound instrument’s material is from mulberry wood and its usual size is about 85*20 cm (with a 15 cm deep bowl shape). As it’s a very delicate Iranian musical instrument, mostly Sufis carry and play it.

In comparison to tar, Setar is fully wooden and doesn’t have a sheepskin membrane. It’s directly played with nails especially the index finger and there’s no need for a plectrum. 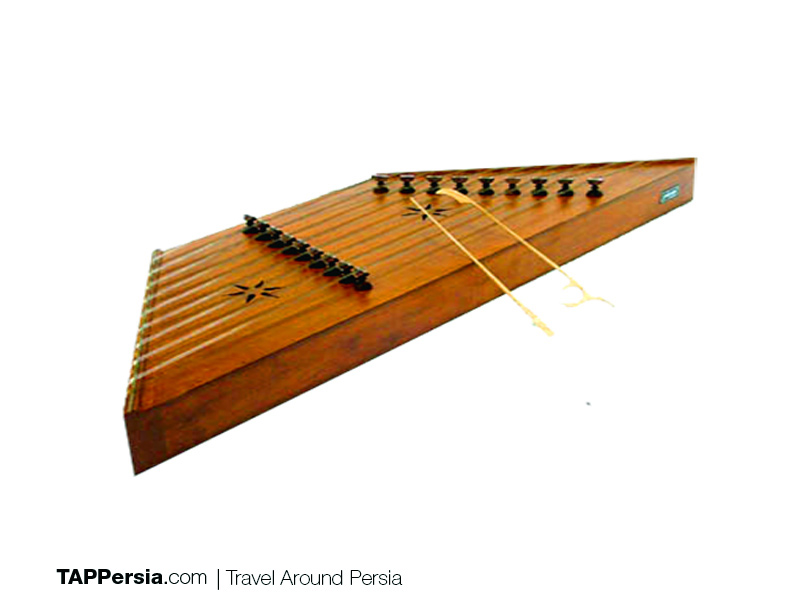 This instrument consists of 72 strings, making it one of the most versatile Iranian musical instruments. These strings are arranged in groups of four ones supported by a wooden bridge. These bridges are used in Santur for a range of 3 octaves.

Interestingly, you can use different types of wood to make a Santur which will result in different sound qualities. Generally, the woods used can range from walnut, chest-wood, rosewood, betel palm, oak, and others depending on availability and sound preference. Santur is also widely played in other countries like Egypt, Iraq & India. 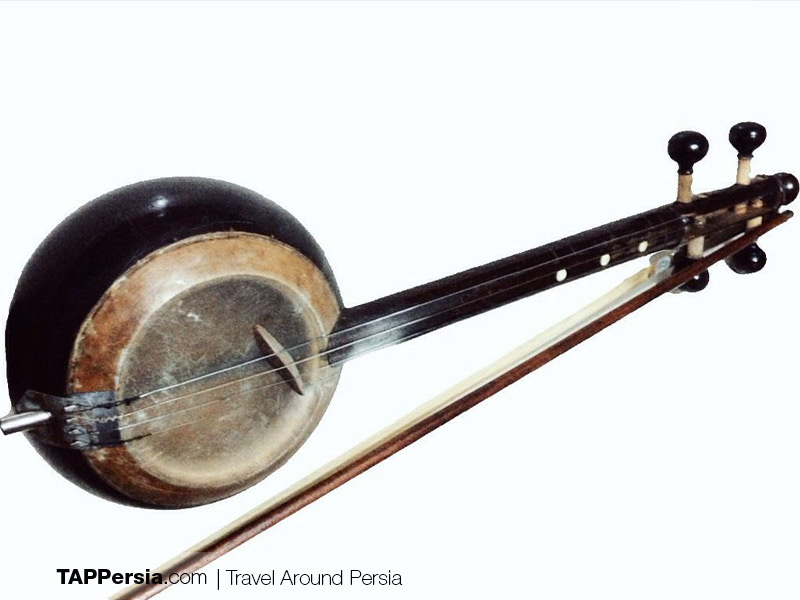 Kamanche is an Iranian instrument, similar to violin & bass. It’s a bit bigger than a violin and almost equal to a viola, however, it has many similarities and differences with them. Like for example, Kamanche is a four-metal strings instrument played with a single-stringed bow. The shape resembles that of a violin, a wooden hemisphere with a long handle. Usually, the wooden hemisphere is covered with a membrane from sheepskin.

A key difference is that Kamanche, unlike the violin, has a bridge that is diagonal. It can be tuned in many different ways depending upon the regions’ likeness. For example in Tehran, it is tuned as G D A E which is similar to that of a violin.

Some people are of the belief that Kamanche was a three-stringed instrument until violin was introduced in Iran in the late 20th century when a fourth string was added to it.

This Persian musical instrument can be observed on many Iranian antique paintings, showing how commonly it was played and liked throughout centuries in Iran. 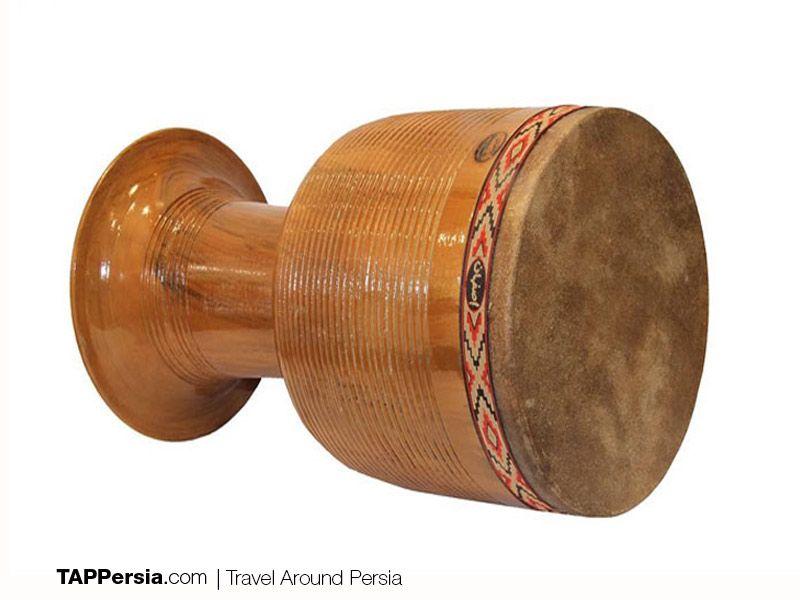 Tonbak, sometimes written as Tombak is one of the most known and popular Persian musical instruments in Iran. It is a hollow Iranian instrument like a drum. In simple words, it’s carved from a single piece of wood, a hollow center is on the top and opens from the bottom side.

A goatskin or sheepskin membrane is glued on top which is fixed. This means that Tombak can not be tuned, however, it is usually prepared before playing by hitting or heating. Interestingly, it has softer low-pitched notes than other drums.

Tonbak is known by many names in Iran like Zarb (meaning to hit). Dombak or Donbak are less common names, while it is known as Dumbek in English-speaking countries. 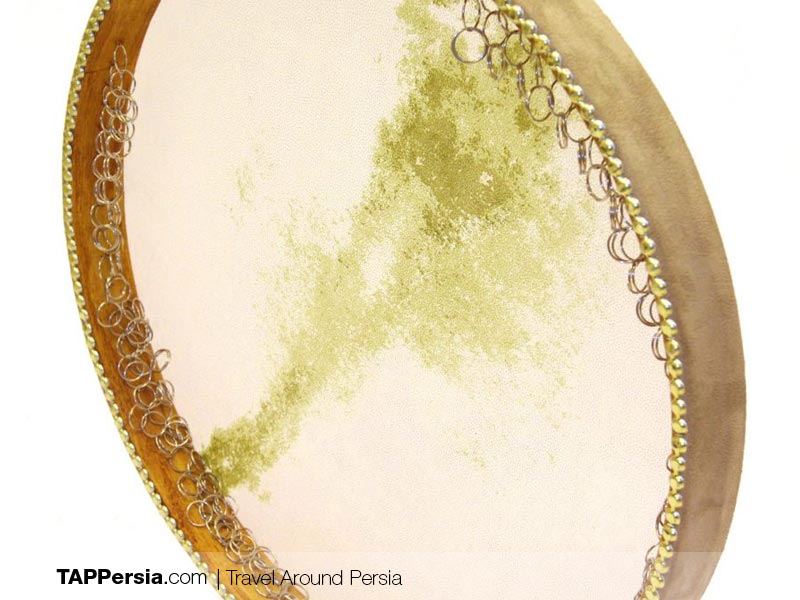 The history of Daf goes back to ancient times when it was played in old Persia, different parts of Asia & North Africa. In the 20th century, this percussion Persian musical was usually played by Sufis in Iran.

Daf is a large round instrument like a drum but very thin. It is usually open at one side and not closed like a drum. The frame is usually made of wood with a sheepskin membrane glued to one side. Sometimes, on the other side of the daf, which is open, many small metal rings are attached. Nowadays, Daf has got very popular among Iranians and many try to learn. It’s got an integral position in Persian music as well. 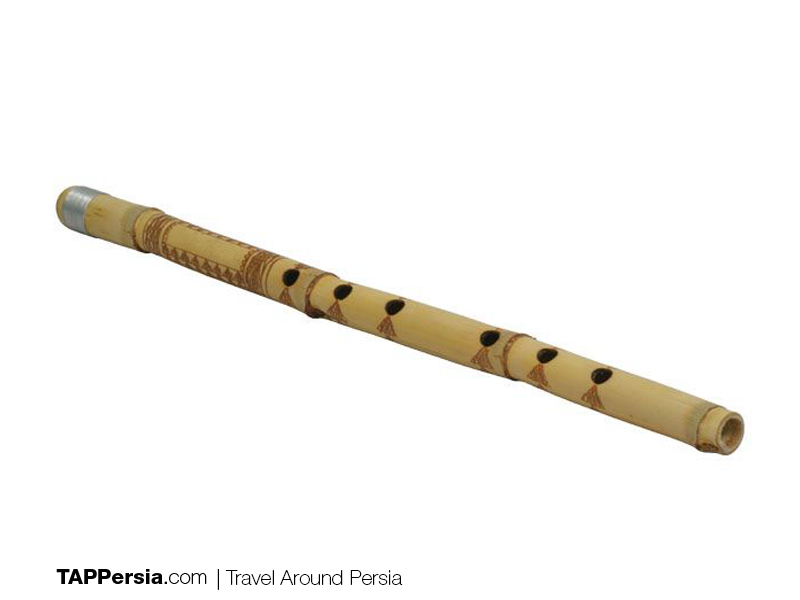 Ney or Nay is a woodwind Persian musical instrument. It’s a knotgrass flute with six finger holes; Five are over Nay and the other one is set by thumb. As the air is blown through Nay, the sound will be heard.

The edge of Nay is held between front teeth. And the stream of air gets direction with tongue, this sets the sound pitches. The technique is not very easy but once learned, it makes pure tones of sounds. The range is about two and a half octaves. 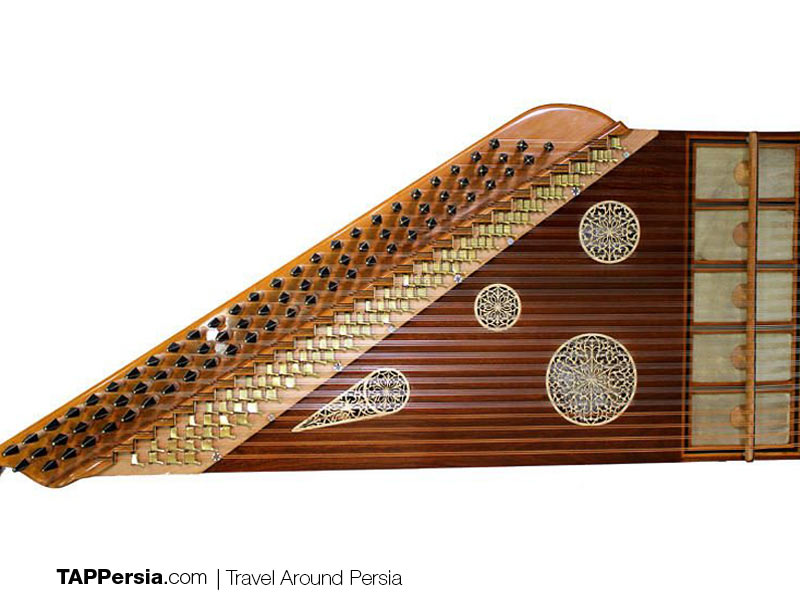 Qanun is a Persian zither in a trapezoidal shape. This Iranian instrument is actually a wooden box that has twenty-four strings; Every three ones are stretched to the sides and kept by pegs. The player can control pitches by setting the levels of the strings. And they are strummed with two plectrums on index fingers. 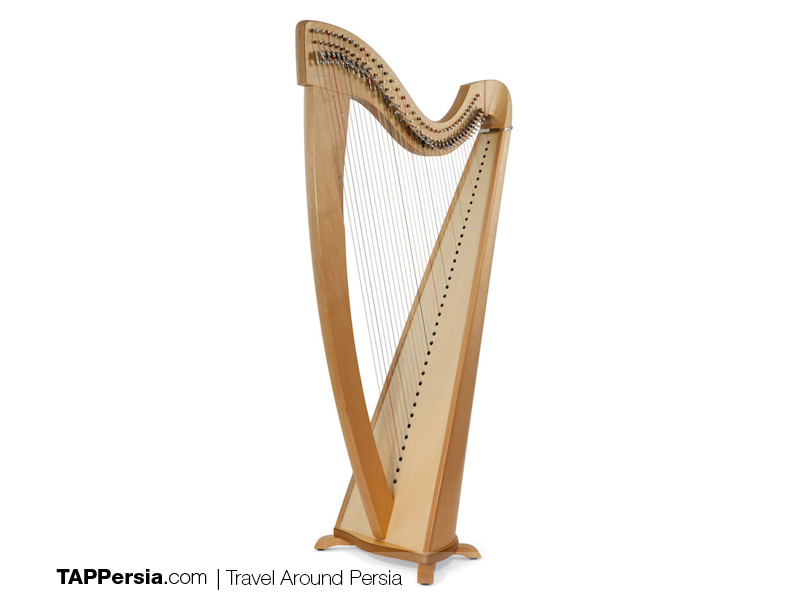 Chang was a very popular Persian musical instrument and was mostly used in the Sassanid era. It’s similar to a harp, but strings are usually made of sheep or goat twisted hair or nylon. Nowadays they’re made of horsetail too. This causes Chang to have a special sound.

They play Chang by nails of right-hand fingers or picks, and the strings are held with left-hand fingers, so it will sound properly. As the technique of strumming is completely different, not many masters this Iranian instrument and it’s difficult to learn.