The presence of Christians in Iran has caused churches to be built in our country. One of them is called Vank Church, which is located in the Jolfa neighborhood of Isfahan and invites you to drink a sip of art, history, and peace. A place that is not only famous for its architecture and artistic decorations but also for the Vank Church Museum and its interesting items are among the reasons why tourists pay attention to this attraction. 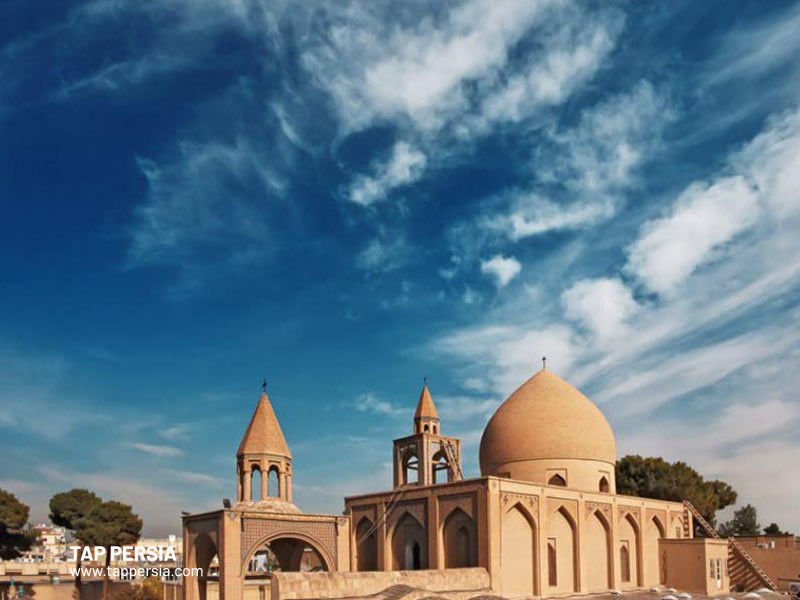 Jolfa neighborhood of Isfahan, where the Vank church is located, has long been the settlement of Armenian immigrants in Iran. During the Safavid period, Shah Abbas I ordered the retreat of the Iranians during the war with the Ottomans.

During the return route, the Iranian army passed through Armenia. By the order of Shah Abbas, many parts of the route were destroyed to prevent the advance of the Ottomans, and in the meantime, the Armenian people were in danger of mass slaughter.

For this reason, Shah Abbas decided to bring Armenians to Iran and settle them. At the end of this long journey, Shah Abbas and his troops arrived in Isfahan with the Armenian people, and Shah Abbas donated lands in the Jolfa region to the Armenians.

Vank Church dates back to 1606. At that time, it was only a small building that they built in the southwestern part of the present building, which was known as Hakob (Jacob) Church. The Christian clergy used this small church for 50 years and many priests and caliphs were trained there during this time. Hakub’s church later became the cornerstone of Amna Perkić Church or Vank Church. There is a text engraved on the entrance of Vank Church that shows the history of this building. The text of this inscription is as follows:

After 50 years, in 1655, the residents of Jolfa, during the reign of Shah Abbas II, started the construction of the main building of church, which is almost the same building today. The construction of the new Vank church took from 1655 to 1664, that is, nearly 10 years. In 1905, the process of expanding the church area was started by Armenians, and new buildings were added to the area. 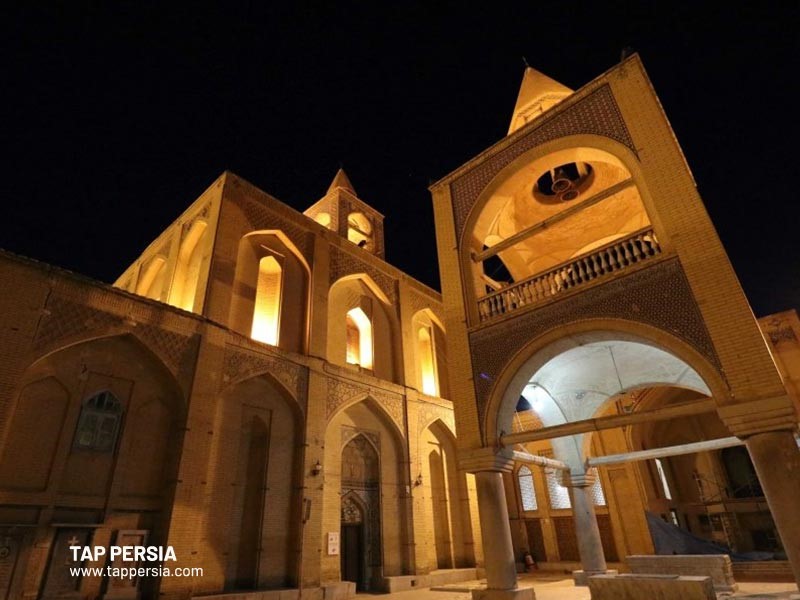 Vank Church Museum was also opened in 1905 and was both a museum and a library until 1930. With the passage of time, various parts were completed in Vank Cathedral, and various parts such as a prayer hall, church entrance tower, and administrative buildings were created in this complex. At the head of the western entrance of Vank Church, there is an inscription made of azure-colored tiles with gold lettering, on which the following text is engraved:

“Vank Amna Pargich Church was started in 1655 AD during the reign of Shah Abbas II and Jathliqi “Filipus” with the leadership of Khalifa “David” and with the help of the good people of Jolfa. And it was finished in 1664 AD. May the reward of worship performed in this church be given to those who are alive or have passed away.”

The Architecture of Vank Cathedral

The Vank Cathedral is located in an area ​​of about 8700 square meters, of which nearly 4000 square meters are buildings and the rest are the Vank garden and the green space of the complex. The exterior of the church is covered with bricks. In the architecture of most churches, they used stone to build the building, but in Vank Church, they used brick instead of stone. You can see tiles with the image of winged angels among the brick texture of the walls. The entrance street of Vanak Cathedral and its interior area is paved.

The main entrance for visitors is a large wooden door that enhances the splendor of the church building. Above the entrance of the church, there is a painting of the interior of the monastery, which is decorated with azure and gray tiles. The following sentence is written above this picture in the Armenian language:

At the entrance of Vanak Church, the church bell tower stands out. This tower has three floors and on the second floor, there is a big clock that weighs 300 kg. This watch is a gift from Mardiros Govark Hordananian in 1931, who made it in memory of his brother after his death. Four steel plates with other clocks are placed on the other three sides of the column.

The clocks of the bell tower ring together with the ringing of the bells and the echo of their sound reverberates in the Jolfa region. At the entrance of the tower, there is a marble inscription with the following text:

“This tower and its clock were built and gifted by Mardiros Goverg Hordananian in 1931 in memory of his late brother who died in 1924.” 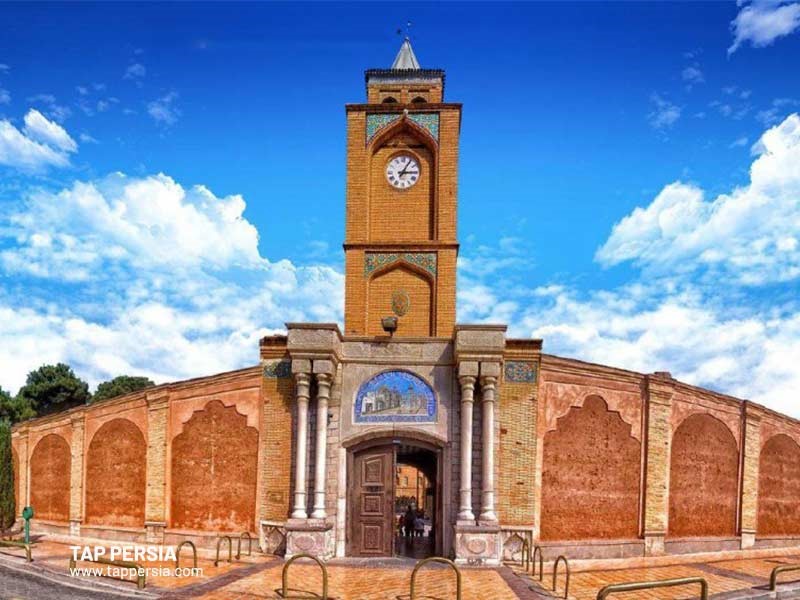 Two rooms have been built on both sides of the church entrance, which were used to receive guests in the past, but today they have been turned into shops and guard rooms. Among other architectural features of the Vank church building, we can mention the domes of the church.

Vank Church has two small and big domes. They built the small dome above the hall in the place where people gather and the big dome above the altar of the church. After entering the church in the western part, square columns with tall arches are visible. The domes of the church are built on these columns and arches.

The outer shell of the dome is made of brick and the inner shell is painted with azure color. Eight windows have been placed around this large circular dome. Between these windows in the inner part of the dome, you can see drawings and paintings.

The paintings on the dome of Vank Church are one of its most beautiful attractions and are very enjoyable for tourists to watch. Images of the creation of Adam and Eve, the story of Adam eating the forbidden fruit and the story of Abel and Cain can be seen on the azure shell of the big dome.

On the roof of the church and near the small dome, there is another bell built in a square space with three-meter columns. These columns are connected by wooden poles at the top, and there are truncated arches between the columns. 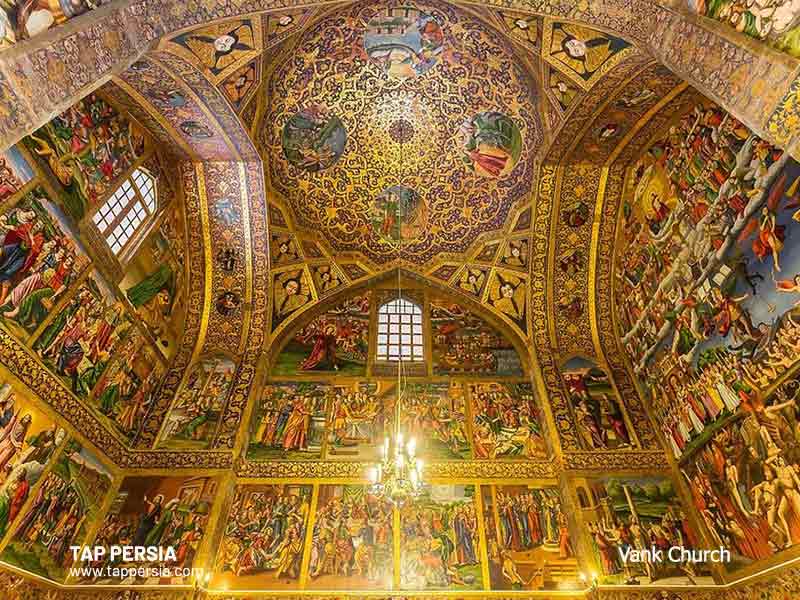 Where to Stay near Vank Cathedral

Where to Eat near Vank Cathedral

When to Visit Vank Cathedral 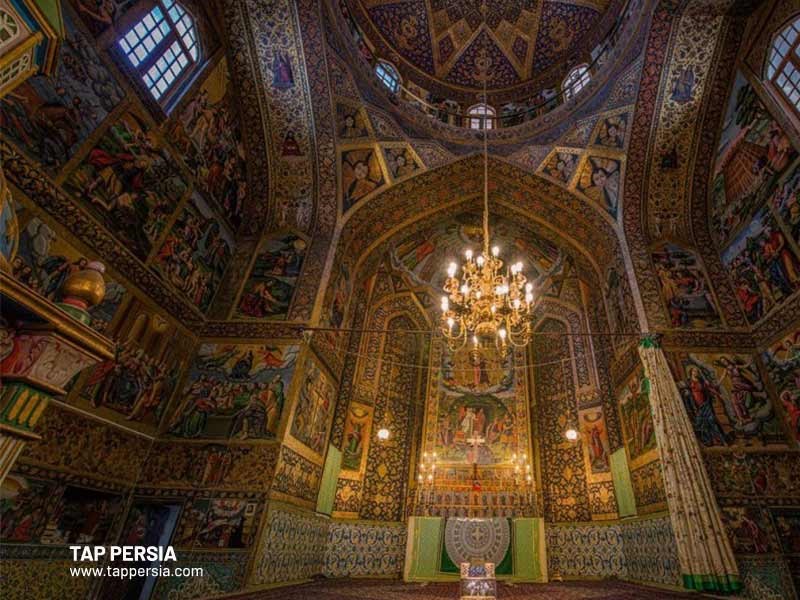 It is necessary to explain that Vank Church is closed on official holidays due to mourning and the first day of Nowruz and famous Armenian events.

How To Get To Vank Cathedral

Depending on where you stay in Isfahan city, you can reach Vank Church from all four main streets. But direct access to Church Street is possible from Hakim Nizami Street. A little further down the church street, you will see the walls around the church building. Of course, traveling by car in the Jolfa area has limitations due to the old texture of this area, and you can park the car in the surrounding streets.

The Si-o-Se Pol subway station is two and a half kilometers away from the Vank Church. And you will reach the church by walking for about 20 minutes in the southeast direction of the subway.

Other attractions in Isfahan

Here we mention some of Isfahan’s attractions and their distance from Vank Church: