Why Iran is NOT an Arab Country

Asking that question is like asking” why isn’t Swiss a French country” that’s how outrageous it sounds. That is to say, the only reason that the question of “Why Iran is not an Arab country?” may come to mind is due to the shared religion of Islam, that causes similarities in social costumes and shared religious practice. Also, the alphabet of Arabic and the Persian language are almost the same, but, the similarities almost stop there.
So if you merely judge by images of religious practices and women covering hair through the media, you may think that Iran is also a part of the Arabic world.

Why historically Iran is not an Arab

Historically, based on Persian vs Arab history, many Arabic countries have been at least at one point under the Persian empire’s rule, especially, before the rise of the Islamic religion. Once Islam emerged, it quickly expanded throughout the world while adopting the Arabic language as the official language.
Many regions such as Egypt gave up their traditional language and completely accepted Arabic as their languages, but Iranian people (of course at that time such a name and nationality didn’t exist) held on to the language and continued to sing sonnets in Persian and future kings didn’t adopt Arabic. So language-wise Iran is not an Arab either. So while the Arabic alphabet and a great many words were adopted into the Persian language, the language itself lived on.
You may find it interesting to know that Persian and Arabic almost have no similarities in terms of grammar. Nonetheless, the holy book of the Quran is still a very sacred book in Iran and its Arabic verses are often used, song and illustrated in Iran. 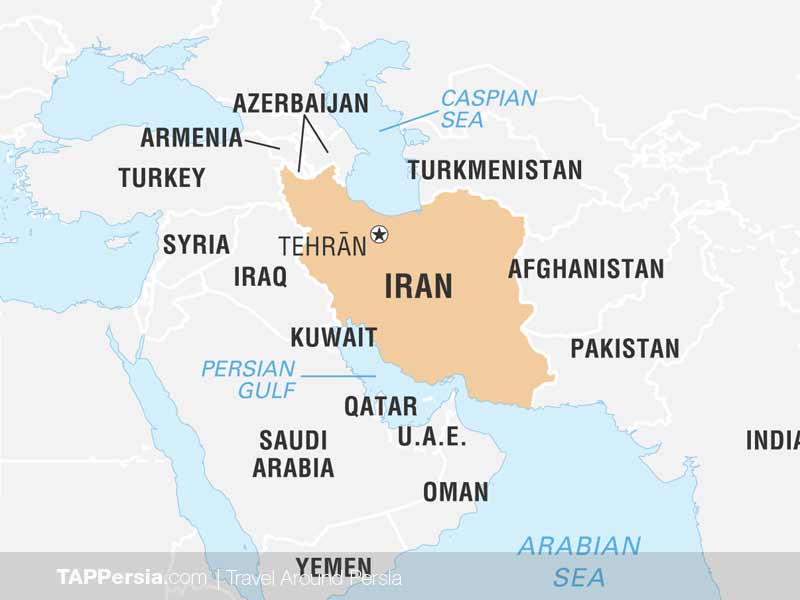 Why Iran is not Arab Geographically

Geographically, the Arab world extends from Saudi Arabia, the cradle of Islamic religion, to the west and includes northern African countries. The map of Arab countries includes Iraq, the western neighbor of Iran and due to the proximity, southwestern ethnicities of Iran speak Arabic and share many Arab world customs such as the renown Arabic dress of men, the Deshdashe.
Moreover, looking to Arab countries in Asia, you will find almost all countries in the east of Iran have traces of the Persian language in their native languages or adopted Persian completely, that is to add, no country is Arab or speaks Arabic.

Why Iran is not Arab religiously

In fact, religiously speaking, Iran is not an Arabic country since in Iran the Shia branch of Islam is practiced and more than 90% of Iran’s population is Shia, In Iraq less than 50% are Shia but in no other Arab country Shia population is notable and the masses practice Sunni branch of Islam. Moreover, almost all political disputes between Iran and Arab countries are rooted in this religious variation.
Nonetheless, the Arabic world is quite vast with 22 countries as members so even among themselves there are many conflicts and disagreements. Iran is usually mistakenly unified with northern Arab peninsula countries, not all Arab countries.
So as the country of Swiss is not French just because they share Christianity and a part of its population speak French, Iran is not an Arab country.

With no doubt, Iran is not Arab

Additionally, the population of the Arab countries close to Iran was so low throughout history that many Persians have moved there throughout the centuries and influenced the northern Arab peninsula with their heritages. Another example of the defining difference between Iran and Arab countries is the oil wealthy stipe of water that separates Iran from southern Arab countries.
This strip was known as the Persian Gulf throughout history, with evidence of this name going back to centuries ago repeated time after time in reliable references. But recently opportunistic leaders have started to call this gulf the Arabic gulf which is a display of desperation to prove authenticity. So historically, geographically, ethnically, etc. Iran is not an Arabic country and like any other proud nationality finds it insulting to be called an Arab country.