Iranians love to have fun, and one of the things that makes them so thrilled is weddings. But when it comes to wedding traditions, Iranians have a lot of formalities. However, these traditions may differ from place to place but many stages are the same. A wedding ceremony in Iran has lots of traditions that families should consider doing. If you want to know more about wedding traditions in Iran, just keep on reading.

At the very first stage, the groom’s family goes to the bride’s house in order to propose. However, this special proposal night has some traditions that can’t be ignored. The groom’s family must enter the house with pastries and flowers. Families get to know each other and they discuss the young couple’s future. It is common that only the parents and their son go for the proposal, or sometimes with grandparents as well. Many families believe in having an elder in the proposal ceremony who speaks on behalf of the groom’s family as a sign of respect. In the end, if the answer is “Yes”, then that’s when the real work begins. The bride’s family invites the groom’s family to their house to discuss the marriage more seriously. This stage is called “Bale Boroon”.

In the second stage of marriage traditions, more people are invited. Probably aunts and cousins of both bride and groom may be at the “Bale Boroon” night to see who their loved one is marrying to and to discuss the wedding and the couple’s future. In this tradition, the mother of the boy gives the girl a ring as a symbol of commitment.

Bale Boroon literally means “to take the yes”. “Mehrieh” is another thing that will be discussed at this party. It is exactly the opposite of dowry. Mehrieh is a promise that the groom gives to the bride in case of a divorce. Usually, Mehrieh consists of gold coins or a house. Both families discuss how many coins should be written down and what else should be added as a legal paper. It’s an agreement between families and it makes the bride’s family feel secure about their daughter’s future.

The Actual Wedding Ceremonies – There Will Be Two

It is common in Iran to have two ceremonies since we love ceremonies so much. The first ceremony is called “Aghd” in which the young couple become husband and wife religiously and legally. This ceremony usually takes place from noon till night. Juice and sweets are served for the guests and it’s a maximum of 5-6 hours. Moreover, a religious man (Mullah) reads some sects of the holy Quran and asks the bride “Do you agree?”. Then, after asking it three times, the bride says “yes”.

It is common to bring a gift for the bride as guests. These gifts mostly include gold jewelry, money, or gold coins. This ceremony is like an engagement party just bigger and more formal since the bride and groom are now officially married. However, this is not where married life begins. At this stage, they just get closer to each other to be with each other for a longer time and to get ready for the real wedding ceremony.

Aroosi – Where the Lovebirds Finally Move to Their House

The second ceremony, the real wedding is called “Aroosi”. It is usually held after a year or more of the Aghd ceremony. It starts at about 8 p.m and it may even continue till dawn depending on the type of the wedding, guests, and the culture of the family. Some families plan for a big wedding with hundreds of people in it including friends, families, and colleagues. They throw a big party at wedding halls or gardens. There are some families who prefer small weddings with close relatives and friends only. They get together for a small party.

There will be dinner, sweets, and a lot of dancing at Iranian weddings. Equally important, right after the wedding party, everyone escorts the bride and groom’s car which is decorated with flowers, and they go to the newlyweds’ house. The rest of the party continues there with close friends and families. These traditions also depend on the type of the family and whether it is a traditional marriage or a modern one. You can read more about their difference in this article. 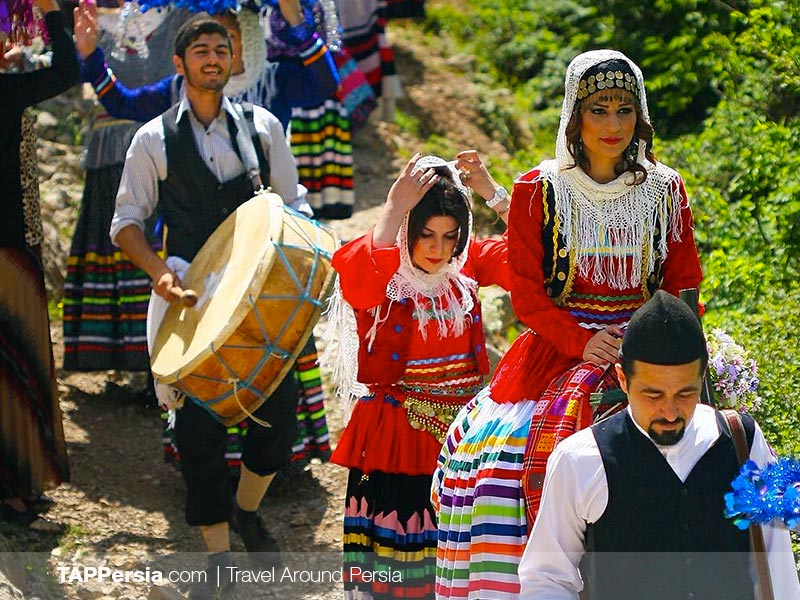 Besides the mentioned usual traditions including proposal, Bale Boroon, and Aghd and Aroosi, there are also some special folklore that takes place in the northern part of Iran. For instance, a woman, which is called “Khoorgir”, is sent to invite people to the wedding. Another interesting tradition in Mazandaran is “Kharj Bar”. One day before the ceremony, the groom has to send meat, rice, oil, and other things to the new house with donkeys and sheep along with some traditional music.

On the same night “Henna Bandhan” takes place separately for the groom and bride. Close friends and families gather, dance, and spend a good time. They put henna in the hands of the boy and girl. They believe henna is from heaven and it brings happiness to their life, so they put some henna in their hands for a life full of joy and happiness.

On the night of the wedding, people put their gifts in large trays, which are mostly money and house fittings. They put the trays on their heads and go through the house while singing and dancing. When the bride gets to the door of her new house, her father-in-law has to give her a gold coin known as “Pa Naaz” which Is a welcoming gift to his son’s wife. 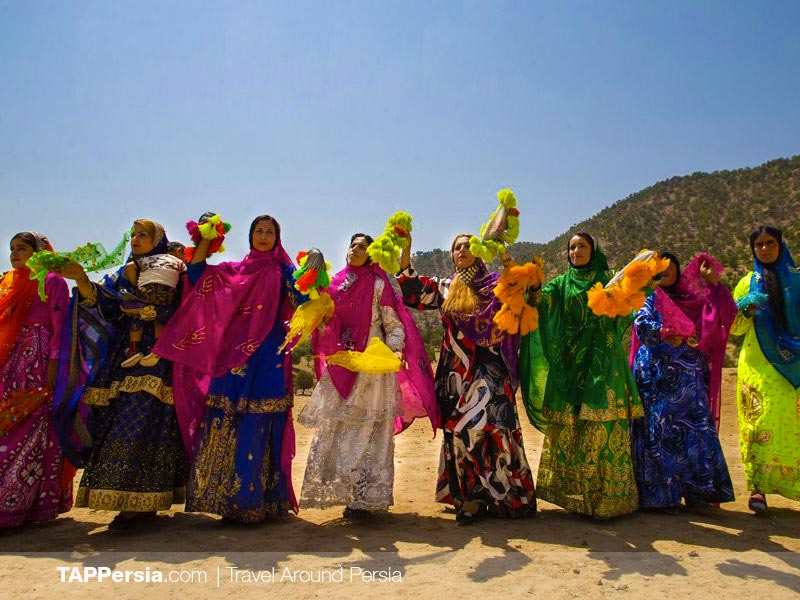 Lorestan has many different traditions from proposal and engagement to the wedding itself. Since there are different tribes in this province, the traditions are a little bit different. One tradition that used to be very common among Iranians was receiving “Shirbaha”. Shirbaha is the money paid by the groom to the bride’s family as a thank you for raising the girl. Nowadays it’s not that common but some areas including Lorestan still receive Shirbaha which is used for buying the dress and settlements for the house.

Another interesting tradition is “Sarkaleh”. In this tradition, the groom’s family buys clothes for the girls and women of the family and gives it to them as a gift after the wedding.

Weddings are so colorful and full of joy in every section of Lorestan. Everyone wears their local costume and dance in their own special way. However, there are no DJs and no special songs. All the musics you get to hear are Dhol (similar to drum) and Corna (similar to saxophone), both famous Iranian musical instruments. They dance in a harmonic way, waving their colorful pieces of cloth in the air, with a big smile on their face. In some tribes, this kind of dance is known as “Toshmal”. 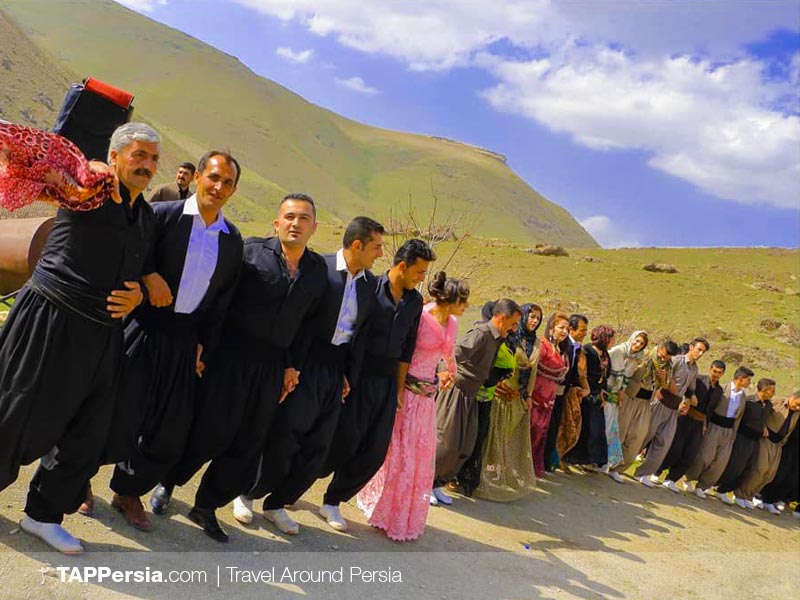 Another interesting place that has its own traditions for having a wedding ceremony is Kurdistan. The most interesting thing about this region is that weddings in Kurdistan take 7 days! For two days, women of the neighborhood go to the groom’s house to help them bake bread. Then, the groom’s family sends a woman and a girl to the bride’s house. They cook for the bride’s family and put henna in the hands of the bride.

Furthermore, that same person should bring the dresses which the groom’s family have bought for the bride’s family. They have to stay there for a couple of days to make sure that everything is ready for the wedding. Seven joyful days, everyone does their best to arrange the wedding, dance, and count the days for a wonderful night. 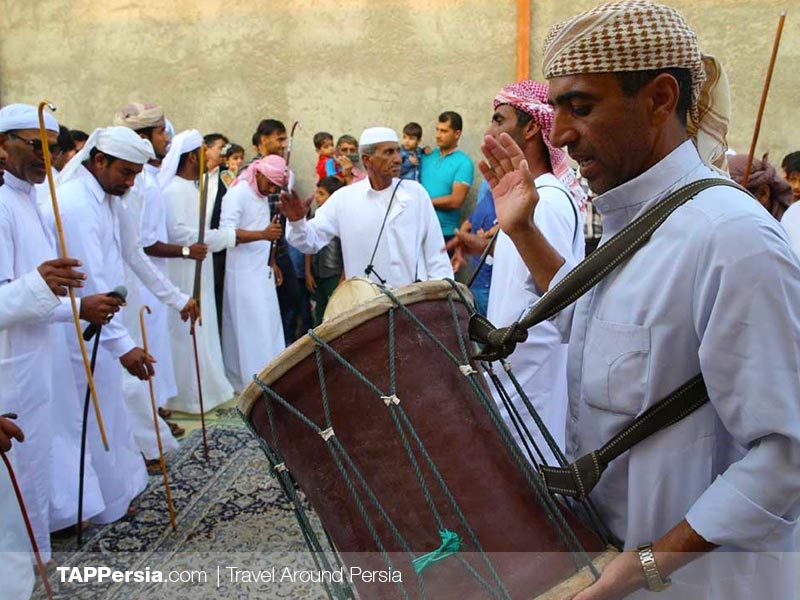 Another 7 days wedding which is now decreased to 3 days, but still nothing has decreased its beauties. Weddings in cities like Qeshm start from lunchtime. Close relatives gather to have lunch together in the bride’s house. Then they prepare the groom’s and the bride’s room. They spend a few days in the bride’s house then return to their own house. In all this time no one is allowed to see the bride! Isn’t that interesting?

When the sun goes down the guests arrive, the groom and two other men of the family have to hold each other’s hands and walk to the bride’s house while dancing and singing. Now it’s the bride’s turn. She and two other women start singing a special song and dance around the room. The bride is not allowed to show her face to the others, only when the guests are gone she can remove the net from her face. Then for seven days, you can hear the voice of Iranian bagpipes and women singing together.

All over Iran, you will see lots of unimaginable traditions which all have a reason. The common thing between all the weddings is their colorful dresses and pursuing happiness and the beautiful way of their dance. Hope you get a chance to experience one of these traditional weddings and become a part of the joy of their wedding ceremony.