Shiraz –the city of poetry and literacy- is one of the prominent touristic sites of Iran that brings a lot of joy, romance, wonders, and company altogether for you. Aside from all the natural and archaeological beauties, Shiraz has to offer, the magnificent religious site known as Shah-e-Cheragh Shrine is another attraction for people interested in investigating cultures and religions where you will be mesmerized and shocked by the magnificence and embellishments and lightning of the shrine. In this article, we provide you with all the things you need to know before visiting Shah Cheragh Shrine.

What is the History behind Shah-e-Cheragh Shrine? 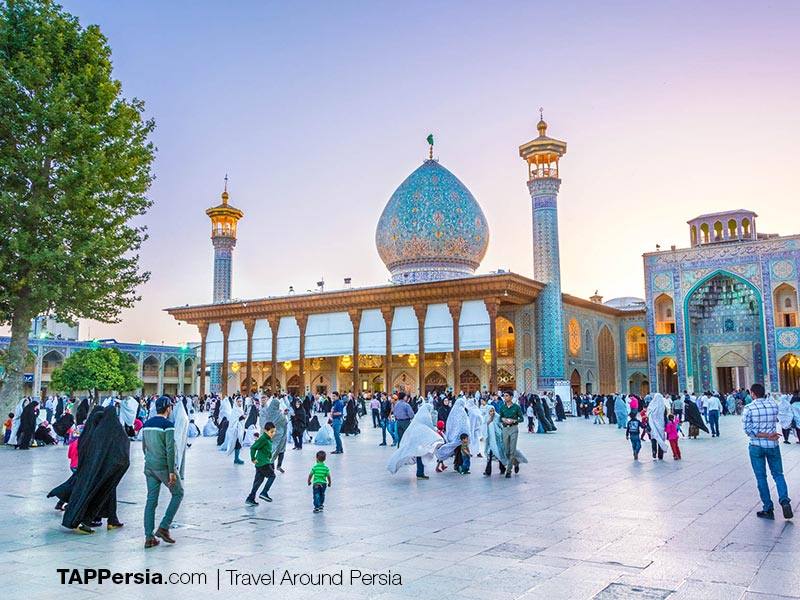 If you are heading Shiraz for your next adventurous destination, surfing the net for a couple of pages, you may have definitely faced with Shah-e Cheragh Shrine. It is also known as Shah Cheragh, Armgah-e Shahe Cheragh, Shah Cheragh Mausoleum. The reason why Shah-e Cheragh is considered as a holy place among Muslims unfolds the story behind it. To put it simply, it is the mausoleum of Ahmad and Muhammad who were the sons of Imam Musa (seventh Shia Imam).

In the 9th century, Imam Reza (8th Shia Imam who was also Imam Musa’s son) was in Khorasan; Ahmad –his brother- was on his way to reach him. On the other hand, Mamun -an Abbasid caliph- was looking to kill all Imam Reza’s relatives. Mamun got aware of Ahmad’s presence in SHiraz and sent a group of soldiers to pursue and kill him. Being on his way to Khorasan, Ahmad was killed by Mamun right in Shiraz. They buried him in an unknown place which was found six centuries later.

King Of Lights? Where it Comes from? 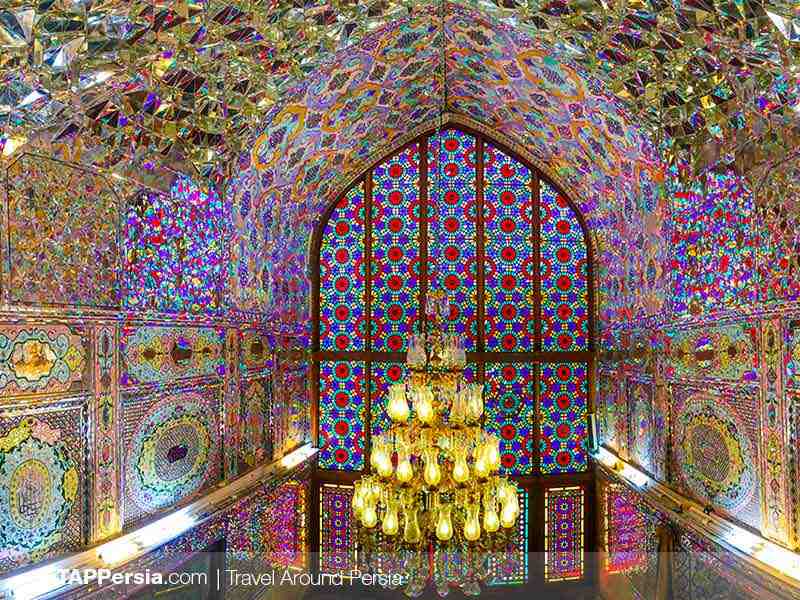 “Shah Cheragh” in Persian means “King of Lights”; the reason why people refer to him as King of Lights goes back to the story of how people found his body. One narrative is that no one knew where the body of Ahmad was buried until the reign of Amir Adud al-Dawla. An old woman living in the houses surrounding his grave noticed a light shining on each Thursday night. She wondered what that place might be; the women notified Amir Adud Al-Dawla and described to him what has been happening. They went there on a Tuesday night and the moment the women saw the light called the king “King! The light!”. King sent some soldiers to investigate the place. They finally found out that it was the place where Ahmad-Ibn-Musa was buried. The king ordered to build a monument for him in order to commemorate him.

Other narratives hold the view that it was Ayatullah Dastgheibi who witnessed the light; then he went after it to find out what the source of light is. He realized that the light is emanated from a graveyard; then he ordered to excavate the grave and found the body with a ring with Ahmad’s name on it.

This tomb was built during the Seljuk Dynasty in the 12th century. Then, in the 14th century, it got renovated under the command of Queen Tashi Khatoun to commemorate these two brothers. It got renovated several times again due to the earthquake and some damages. Long story short, after a while, a mosque and theological school were built adjacent to the shrine to turn it into a religious hub in Shiraz.

The Beauties of Shah-e-Cheragh Shrine 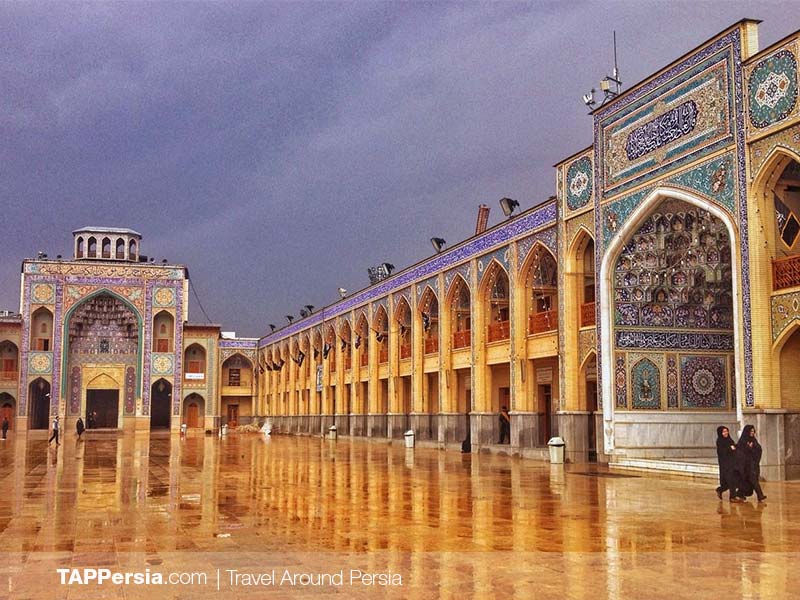 The mesmerizing tile works in the shrine catches every visitor’s eyes. Iron columns being covered with delicate embellishment is another remarkable point about Shah Cheragh. As the name perfectly puts it, it is definitely the kingdom of light where the harmonic lightning and glory of there will stop you staring for minutes.
Magnificent chandeliers hanging, green lumps on the walls, and colorful glass windows on the roof emitting light are some of the eye-catching features of Shah-e-Cheragh Mosque. Not to mention that shielding the entire interior, the glowing dome makes it quite a scenery. So do not forget to take your camera with you to document all those beauties and wonders of the Persian mosque and shrine.

What is Awaiting for you in Shah Cheragh Mosque? 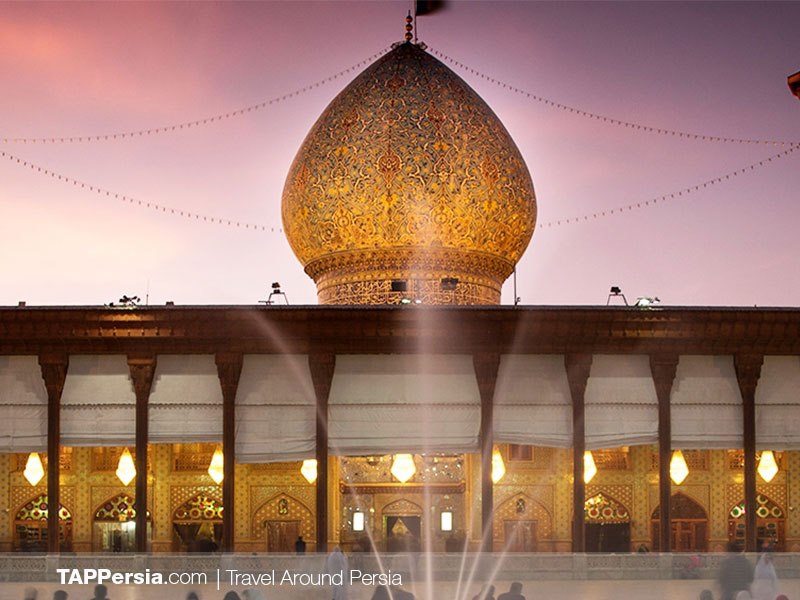 There is a great museum in Shah-e-Cheragh Shrine which offers visitors ancient copies of the Quran and a few other religious pieces. The Shah Cheragh Mosque encompasses several faithful Shia’s tombs who were persecuted because of their faith in Shia. So no more wondering about where to buy a souvenir for your loved ones!
Note that it is open to non-Muslims as well. So no more worrying about whether they let you in or not. But bear in mind that like any other shrine, women wearing Chador during their visit is mandatory; but as well as all other shrines, they provide Chador for visitors.

Since it is a covered area, all seasons sound good for visiting there. In case you are wondering when is the best time to visit Shiraz, the preferred timing is from March to May. Bear in mind that Shiraz has a variety of places you should not miss. Nasir-al Molk Mosque (Pink Mosque), mesmerizing Eram Garden, astounding Hafez Tomb, and the breathtaking Persepolis are a few of Shiraz must-see sites.