Persian culture and food go hand in hand. Persian snacks are quite popular in Persian cuisine and are often eaten at home, as a quick supper, or on the streets. They each hail from a distinct region of Iran, which is really a great and unique thing about this beautiful country.

There are plenty of delicious and healthful options available. While it’s a cheap way to eat, it also introduces you to a variety of new culinary delights that you won’t find in your neighborhood eatery. Read on to know more about mouth-watering Iranian snacks that you can buy for yourself or as a magnificent souvenir.

There are many delicious Persian snacks for you to try but we will dive into the top Iranian snacks that you can enjoy while visiting Iran: 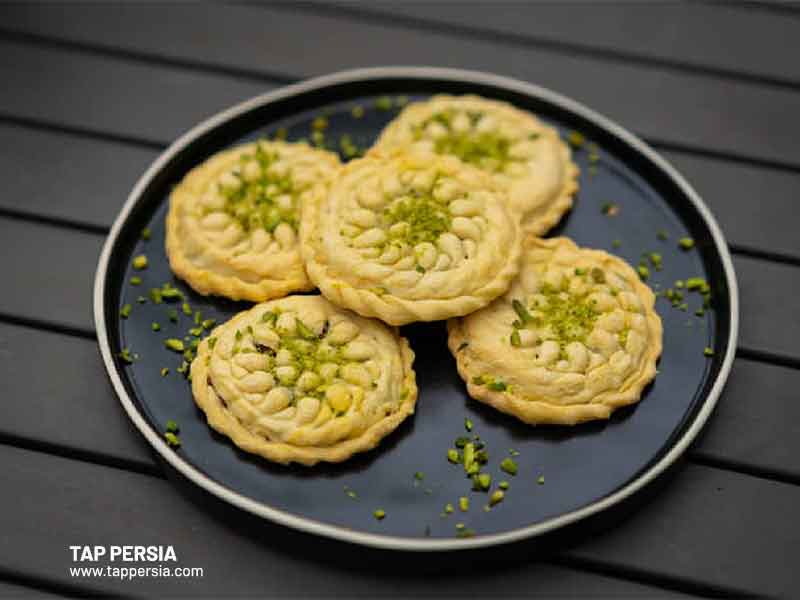 In Kerman, a unique variety of Persian snacks called kolompeh is prepared. Dates, flour, spices, and oil make up the bulk of this unusual sweet, which has a unique composition. The Kolompeh is formed like a muffin, but it also contains dates. One of the most delectable varieties of Kolompeh is the walnut kind. Because they are so dry, Kerman’s Kolompeh may be preserved in airtight containers for a very long period. 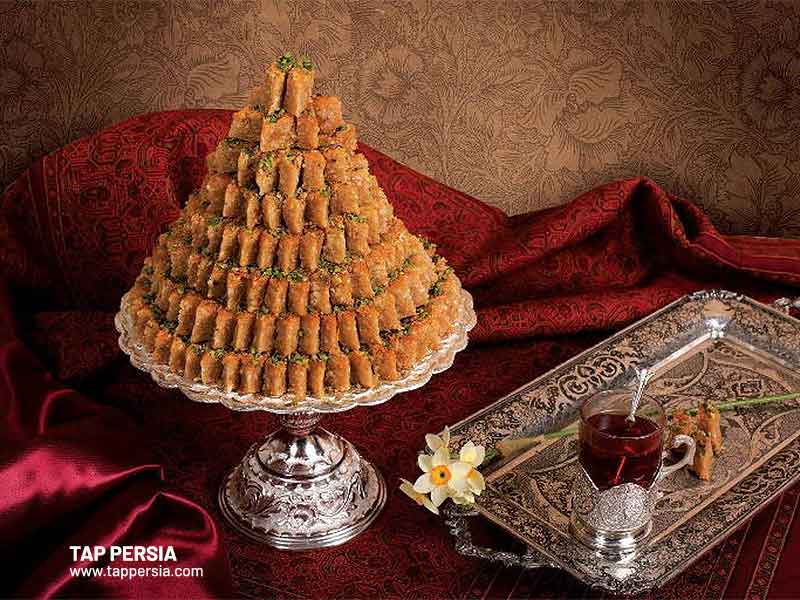 Baklava is a layer of sweet pastry usually filled with finely crushed nuts and formed of filo dough. Then, they are spiced with a variety of savory and sweet spices before being either sweetened with syrup or honey. In Iran, Lebanon, Syria, Greece, Armenia, India, and many other nations in the area, baklava is still among the most well-known and well-liked sweet pastries. With just slight phonetic and spelling differences, you may discover the word “baklava” being used in many other languages. This sweet is referred to as baghlava in Farsi.

Today, the popularity of baklava has spread far beyond the middle east and has made it a beloved delicacy in other countries as well. 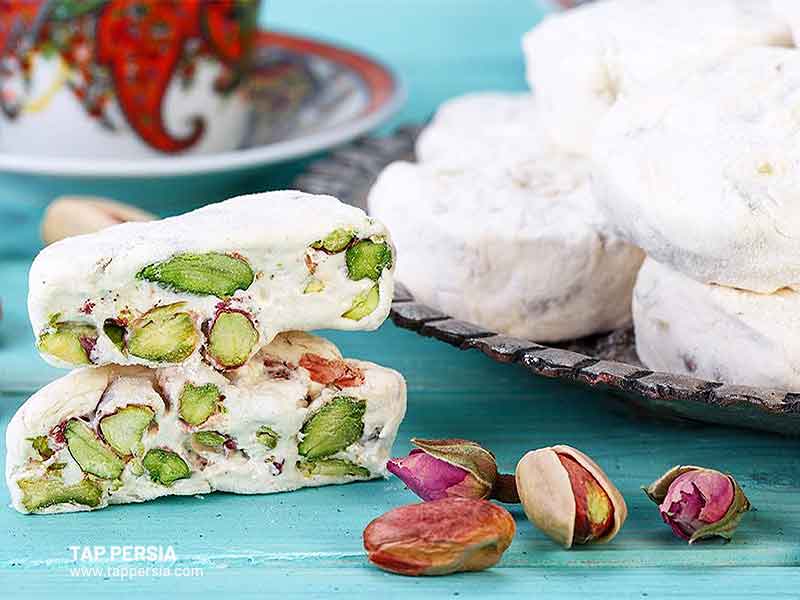 Those who have visited Isfahan have undoubtedly had Gaz at least once. This is another Isfahani souvenir that people purchase which is among the best Persian snacks. Even Iranian visitors visiting Isfahan purchase Gaz to carry home as a memento. The sap of the Angebin plant, rose water, pistachios, and egg whites are used to make the Persian sweet dish known as gaz. The cost of Gaz increases with the number of pistachios in it. You can get them dredged in flour or nicely packaged in unique containers. Iranians prefer the latter, which they refer to as Gaz Ardi. 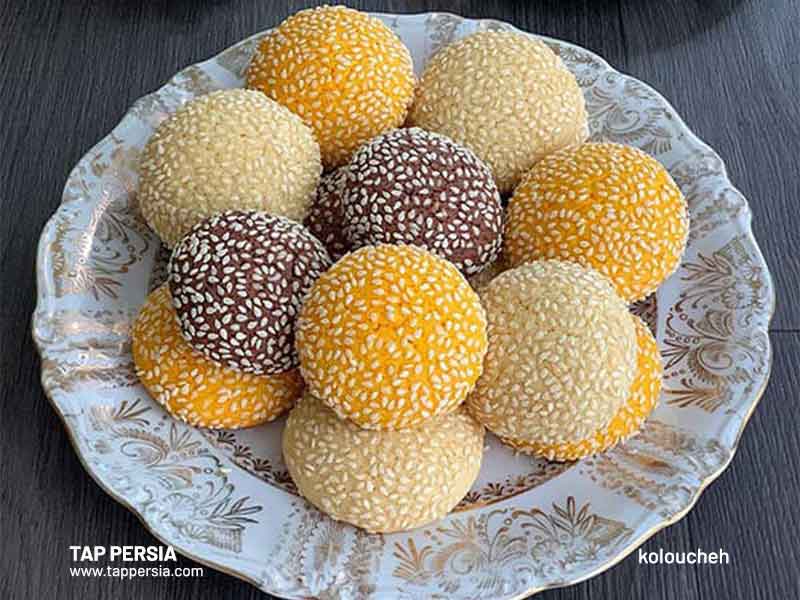 You’ll notice that each dessert is unique to a different area of Iran. Despite being widespread across Iran, koloocheh’s origins are in the country’s north. This is a type of cookie that has cinnamon, sugar, walnuts that have been crushed, and sometimes dates that have been minced. Particular to Kerman, which is known as Kolompeh, are the ones with dates. When drinking Persian tea in the morning or the afternoon, you can also choose to eat something similar to these Persian snacks. 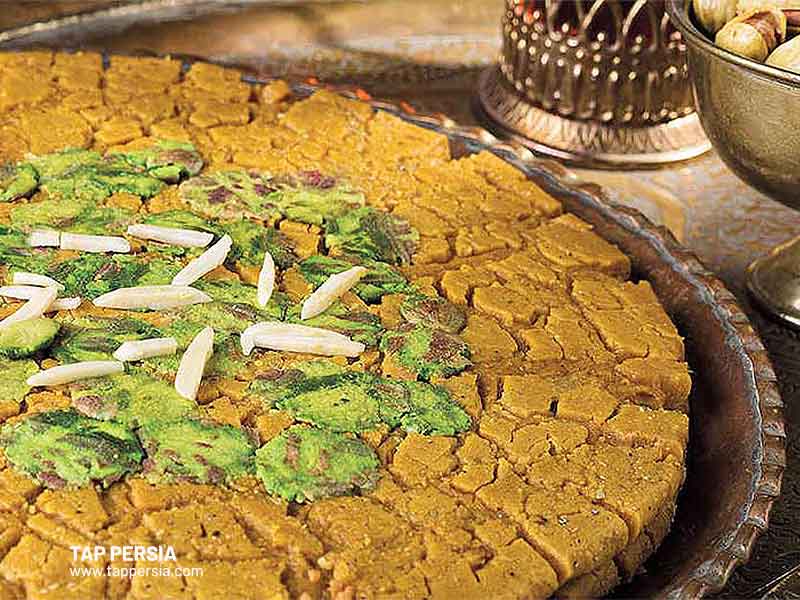 Take a look at everything Qom has to offer. Another sweet dish is available in this pious city and is a fantastic option to purchase as a memento. Wheat sprouts, rosewater, eggs, butter, sugar, saffron, and cardamom are all ingredients in the confectionery known as sohan, one of the best Persian snacks that you can find. Pistachios are then used as the motif at the top. You will pass via Qom en route from Kashan to Tehran. Therefore, it will be an excellent chance to try this Persian dessert. 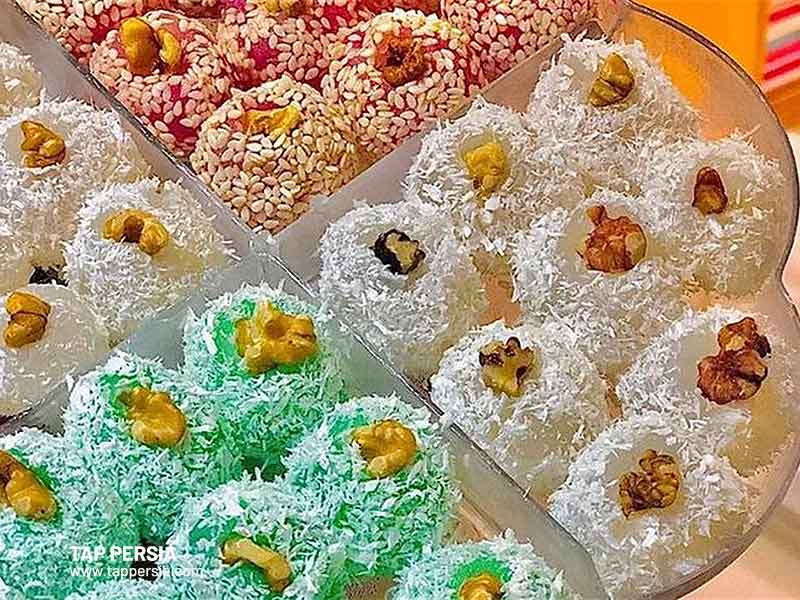 Traditional Persian snacks like baslogh are frequently stocked at Iran’s renowned confectioneries stores, which are known across the world. Doshab (grape syrup) and starch are used to make this exquisite Maragheh memento. They apply threads to baslogh, a starch-based confection. When Norouz, the Iranian new year’s eve, had to be celebrated in Farvardin, people used to begin making these delicacies in Azar (December) (March). The province of East Azerbaijan in Iran’s Maragheh, one of the biggest cities, is where it began. The route was soon paved all the way to Malayer and Arak in the middle of Iran. 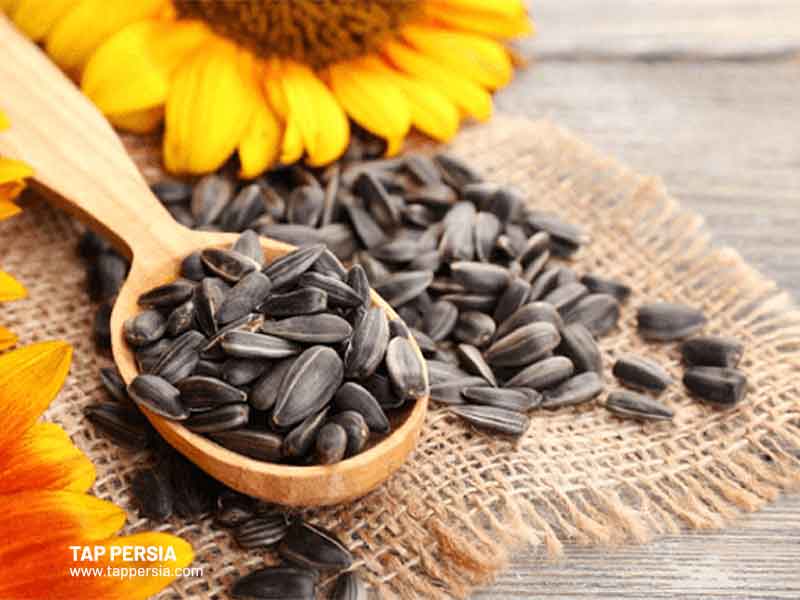 There are many distinct types of tokhmeh in Iran, including salted, lime-flavored, golpari (angelica-flavored), and vinegar-flavored varieties. Some examples are tokhmeh kadoo (pumpkin seeds), tokhmeh aftabgardoon (sunflower seeds), and tokhmeh hendevaneh (melon seeds).

Tokhme is consumed by cracking the shell apart and consuming the seed within, making them one of the greatest Persian snacks to eat. 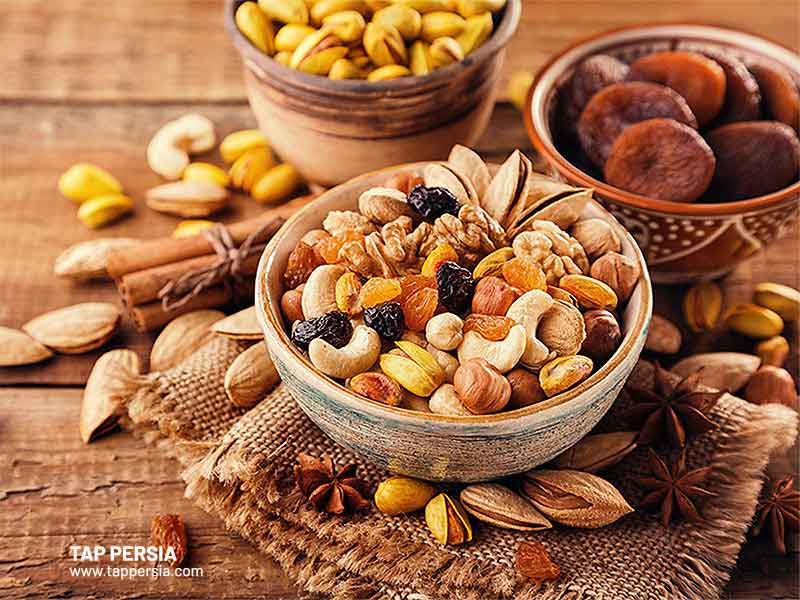 Ajil is a catch-all name for several varieties of mixed nuts, dried fruits, and seeds.

In practically every gathering in Iran, ajil is served; it can be sweet, salty, or a combination of the two. Almonds, chickpeas, hazelnuts, cashews, pistachios, and walnuts may all be used to make salted ajil, along with roasted seeds like melon, squash, sunflower, and others. Sweet Ajil is a mixture of nuts including raisins, dried figs, and others.

Ajil is a dish that is presented to visitors in every Iranian home, especially during significant occasions like Chaharshanbe Soori, Nowruz, and others. 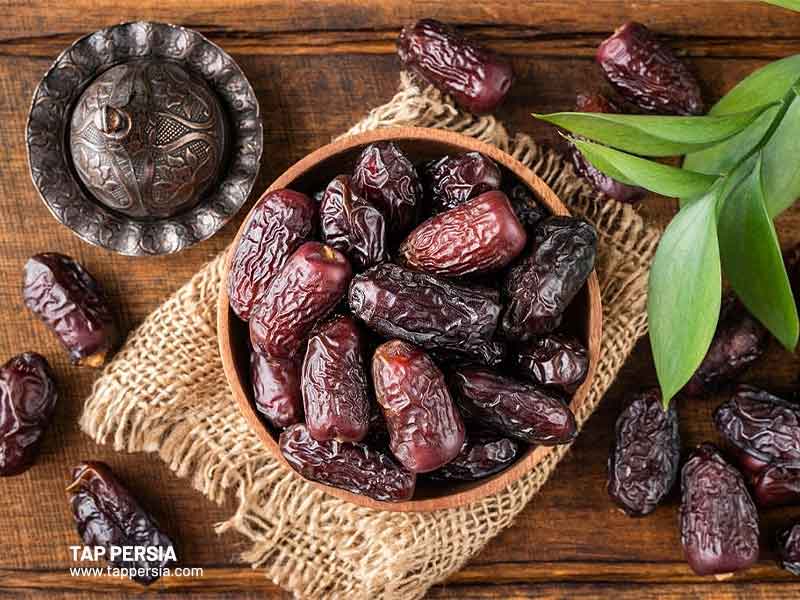 The southern cuisine of Iran frequently includes Persian dates. Persian dates are among the most popular Persian snacks in Iran. The palm tree’s history dates back millions of years. Men began growing palm trees for various purposes about 7,000 years ago. The tree was initially cultivated in Middle Eastern nations like Iran, after which it progressively spread to other nations.

The date palms are said to be one of the factors that have allowed the middle-eastern countries to exist in these scorching climates. In addition to using the wood from the trees to make boats and the leaves to make canopies, baskets, and other items, they had the fruits of palm trees for food. 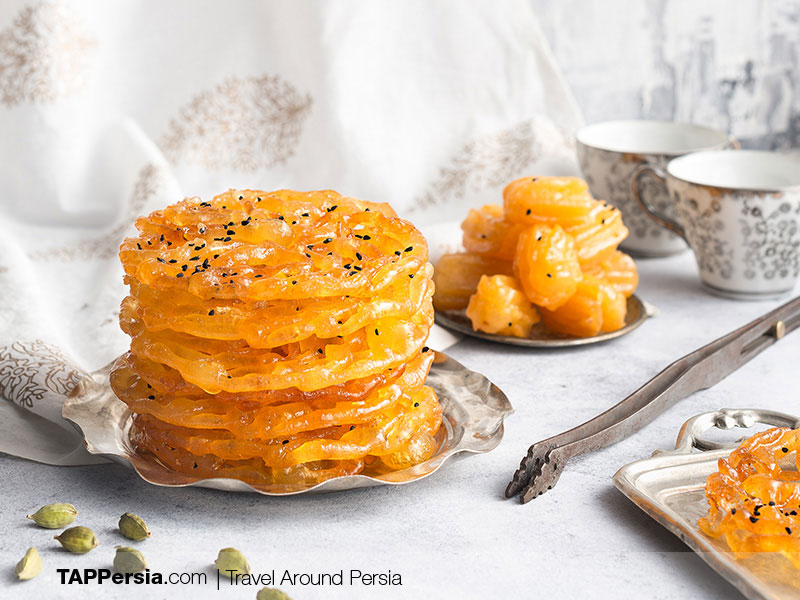 A well-known type of Iranian dessert called bamiye soars in popularity during the holy month of Ramadan. This saffron- and rosewater-flavored Persian treat is a staple of the Iranian Iftar meal during that month. “Zoolbia” is the name of another sort of Iranian confection. These two varieties of sweets are typically offered together and are actually rather enjoyable to consume. It somewhat reminds me of Churros coated in syrup. The saffron and rosewater give it a lovely golden color and aroma. It is undoubtedly worthwhile to try. Warmth and a cup of tea or coffee go well with it. 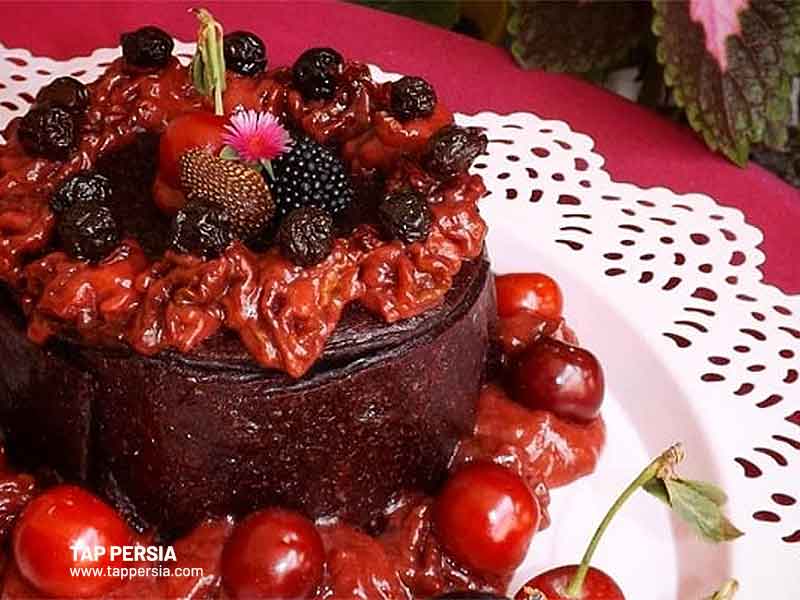 Lavashak, or Persian fruit leather, is one of the most favorite Persian snacks among Iranians. The flavor is salty and sour, and it is a thin coating of dried fruit essence. Iranians appreciate foods with robust flavors, whether they are sweet like most Persian sweets or acidic like pickled vegetables or qaraqoroot (that literally means black curd and is a kind of dairy). A fruit roll with a delectable combination of sour, sweet, and salty and is known as Persian fruit leather. Different fruits are used to make lavashak. To produce lavashak, a thick fruit extract is prepared and dried.

Lavashak was initially created in the past when people mashed up extra fruit and dried it out in the sun. Fruit leather has been created over the years using a variety of fruit and ingredient combinations. Although even industrial techniques are employed, the fundamentals are essentially the same. Lavash, a sort of thin bread from Iran, is referenced in the word lavashak because of the similarity between the two foods. 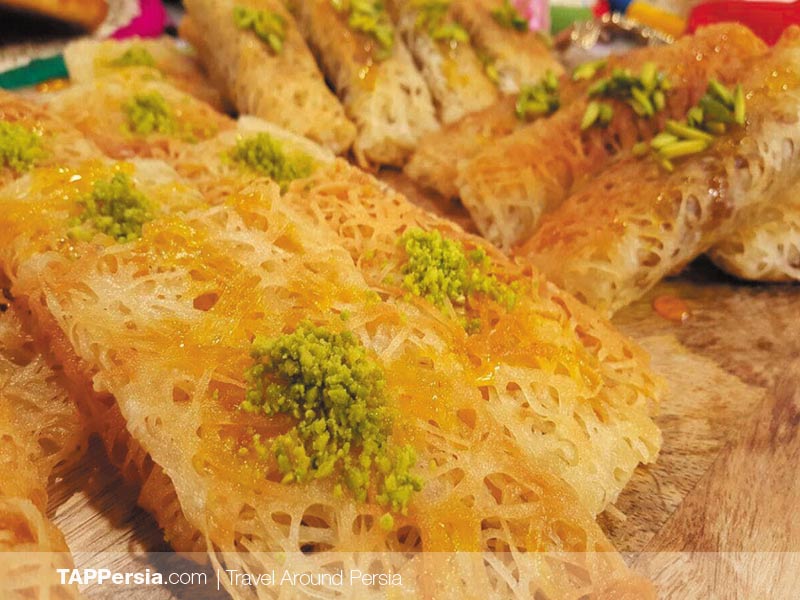 A typical Gilani treat is the Reshteh Khoshkar. This dessert is also served at iftar in Gilan, particularly Rasht, as a special Ramadan dessert. The name of these delights is likewise derived from the name of the city. This dessert is made in Tehran, namely in certain areas and especially during Ramadan.

Its key ingredients are rice, sugar, nutmeg, and flavorful spices like cinnamon and honey. After being given to the customer, the Reshteh Khoshkar is made on a hot copper tray and should be prepared at home with some butter or oil. Then mix it with a beverage that contains water, sugar, cinnamon, and honey (nearly like zolbia and bamiyeh). After a little while and after being sweetened, you may consume it. 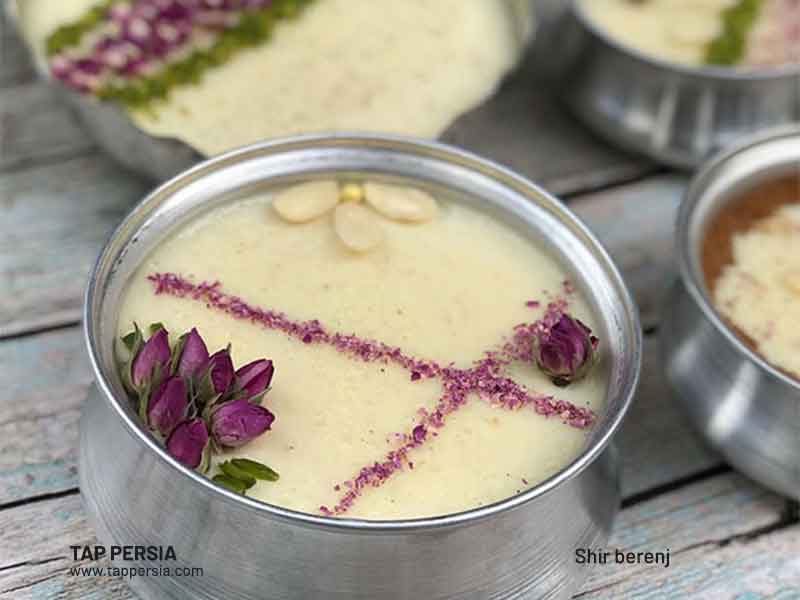 Iranian traditional pudding known as shir berenj is made mostly with milk and rice. Shir berenj is translated as “milky rice.” Shole Zard, a rice pudding that is popular in Persia, is another delicious dish.

During the holy month of Ramadan, rice is typically served as iftar since it is filling and has many health benefits. Shir Berenj, also known as rice pudding, is an excellent source of vitamin B and helps keep you from getting weary. Shir Berenj may also be spelled Shir Berinj.

You may, however, also serve it for lunch, supper, or the morning. This pudding can be heated or served cold. The effort is worthwhile! 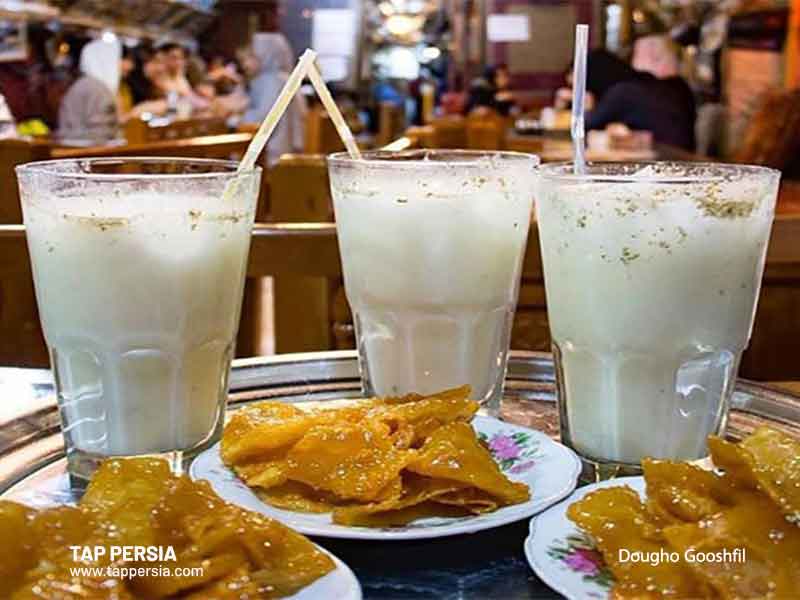 In some bizarre way, this food is a tribute to Isfahan. In Iranian pastry stores during Ramadan, gooshfil is a delectable dessert that is sold alongside zoolbieh and bamiyeh. The ingredients used to prepare it include yogurt, eggs, saffron, flour, and cardamom. The above components are first combined to form a paste, which is then cooked in oil. Last but not least, they offer local salty-sour Doogh with Goshfil that has been dipped in sugar syrup (yogurt drink). Isfahan residents also consume baklava together with dough. If you are ever in Isfahan, make sure to sample this unique and intriguing combo.

In the local Persian foods article, we suggest some famous and delicious Iranian dishes that you should try if you plan to travel to Iran.