Everything You Need to Know About Persian Miniature

There is a saying that “art belongs only to Iranian.” Actually, the arts of Iran are one of the richest art heritages. Iranian artists played an important role in the history of art, especially when it come to miniature, the name of Persian miniature will be found on the top of the best works. 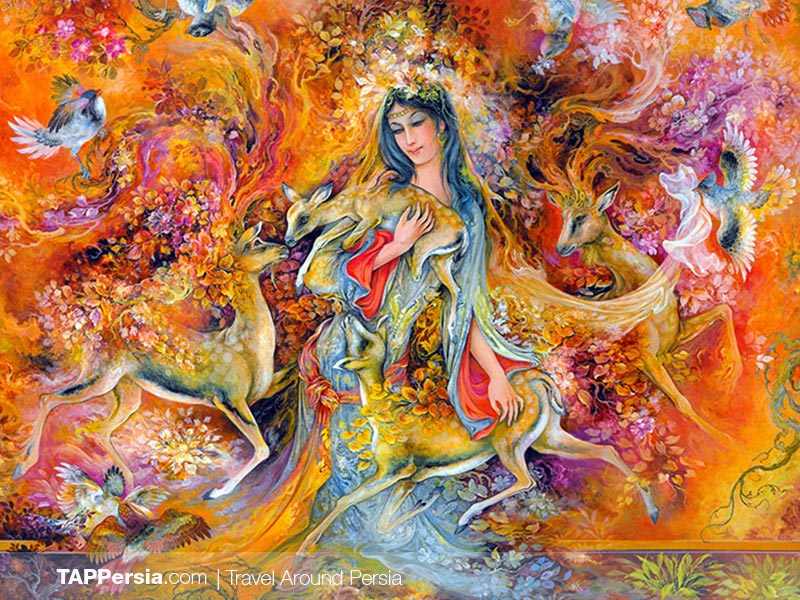 The term miniature means to represent on a smaller scale and it has been in common use since the Qajar dynasty kingdom. Today, Iranians use the term to indicate any Iranian painting that does not follow the western styles; every painting – both old and new – that has the Iranian traditional characteristics is called miniature.
Thus, when we use the term miniature we mean more or less Iranian miniature painting, but we will also mention maquettes as a work of miniature art among Iranians.

Where to See Persian Miniature 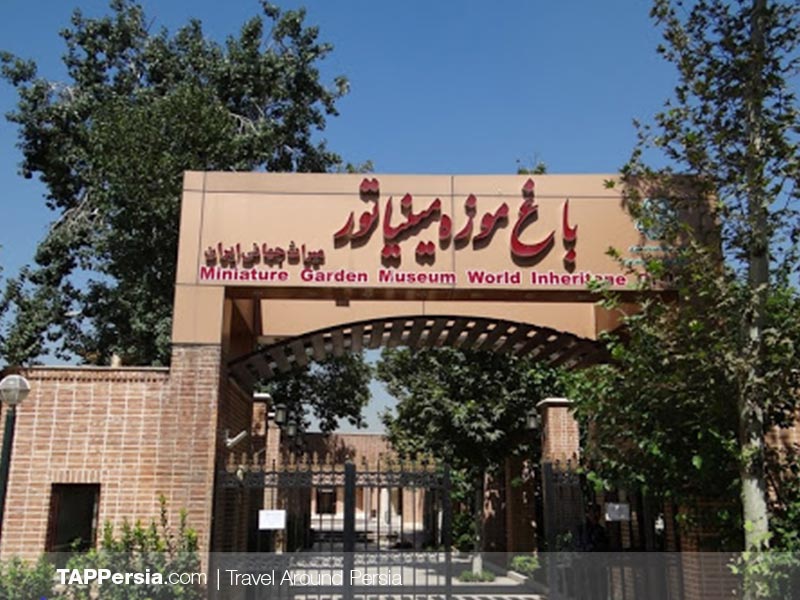 Are you looking for traveling around the whole of Iran, but you don’t have enough time? So, let’s make your dream real by visiting the Miniature Garden Museum of Tehran.
This Persian Miniature Garden is one of the rather new tourist attractions in Tehran. You can enjoy a combination of modern architecture and traditional Iranian gardening here.
Some paintings of antiquities of Iran have been represented at the gallery section of the museum.
There are truly beautiful and elaborated maquettes in the palace environment as well. The exhibited maquettes include Takhte Jamshid, Cheqa Zanbil, Naqshe Jahan Square, Pasargad, Takhte Soleyman, Gonbad-e Soltaniye, Arg-e Bam, Armenian Churches, Behistun Mountain and Inscription, Tabriz Bazaar, Shoushtar and Gonbad-e Qabous Waterfalls, Sheikh Safi Al-din-e Ardabili Collection, etc.The Persian Miniature Garden Museum is constructed of the Iranian original elements such as tiling, pools, and waterways of the garden. 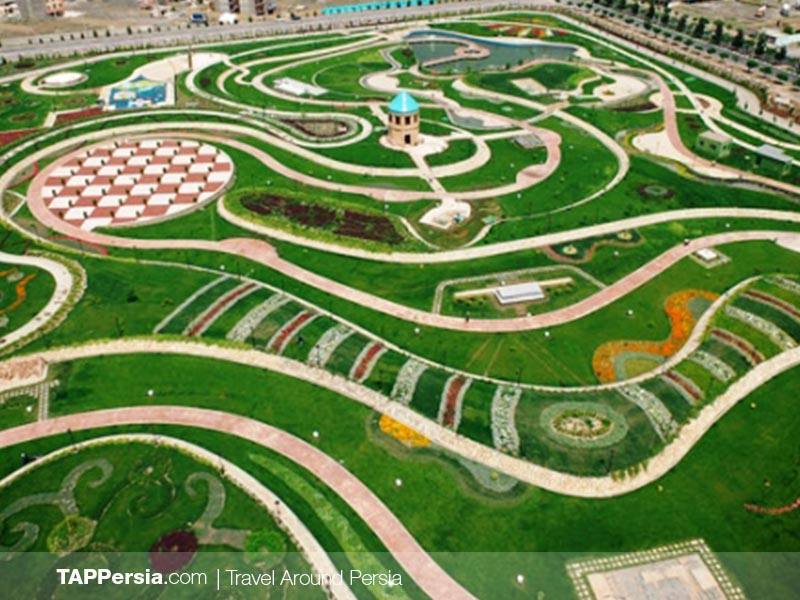 The first Iranian miniature park in the east of Iran is the Miniature Garden of Mashhad. About 60 cultural, religious, and tourist attractions are exhibited in the garden.
Of course, it should be mentioned that this is also a new tourist attraction and some of the maquettes have not been exhibited by now. 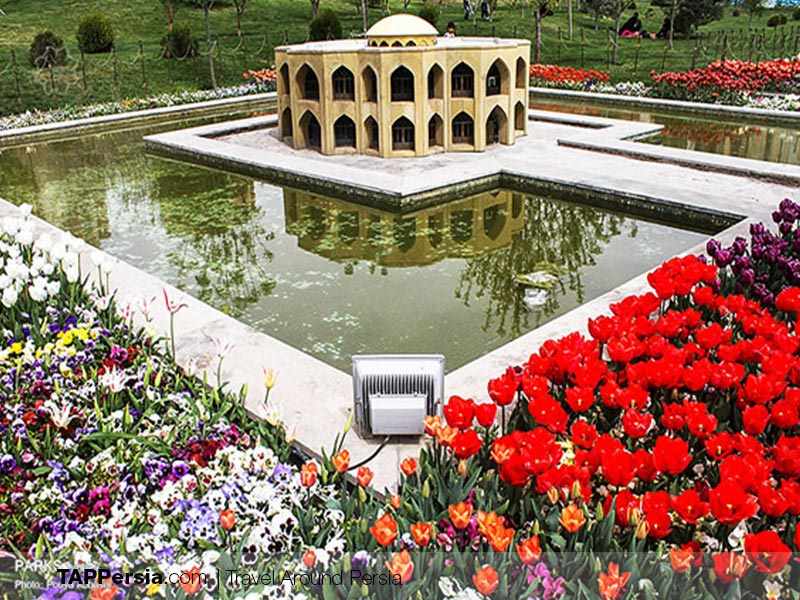 Miniature Park of Tabriz is constructed by the Beautification Organization of Tabriz Municipality in 2012. The Park is also called MiniaTabriz because you can visit a number of unique attractions of Tabriz on a smaller scale.

This is a picture book showcasing the Metropolitan Museum of Art’s collection of popular Persian illustrations from the 14th to early 17th century. The book contains an introduction by M. S. Dimand which briefly explains the history and importance of these miniature paintings and the artists who made them.

The miniature was a popular art among Iranian before the rise of Islam. However, Iranian painting could only regain his popularity when Iranians became part of the Abbasid Court in the third century AH.

Indeed, Iranian miniature is the Iranian painting before the rise of Islam which merged with Islamic mysticism and thoughts. It eventually became a way of visualization of the divine resplendence.
Precious works of art had been painted during the Abbasid dynasty, a large number of which were destructed by Mongols.
There are some different Persian Miniature Schools; each one has its single characteristics and methods. The most effective schools of Iranian miniature are as bellow:

We usually divide the age of Shiraz school into two different periods – the eighth century AH and the ninth century AH. 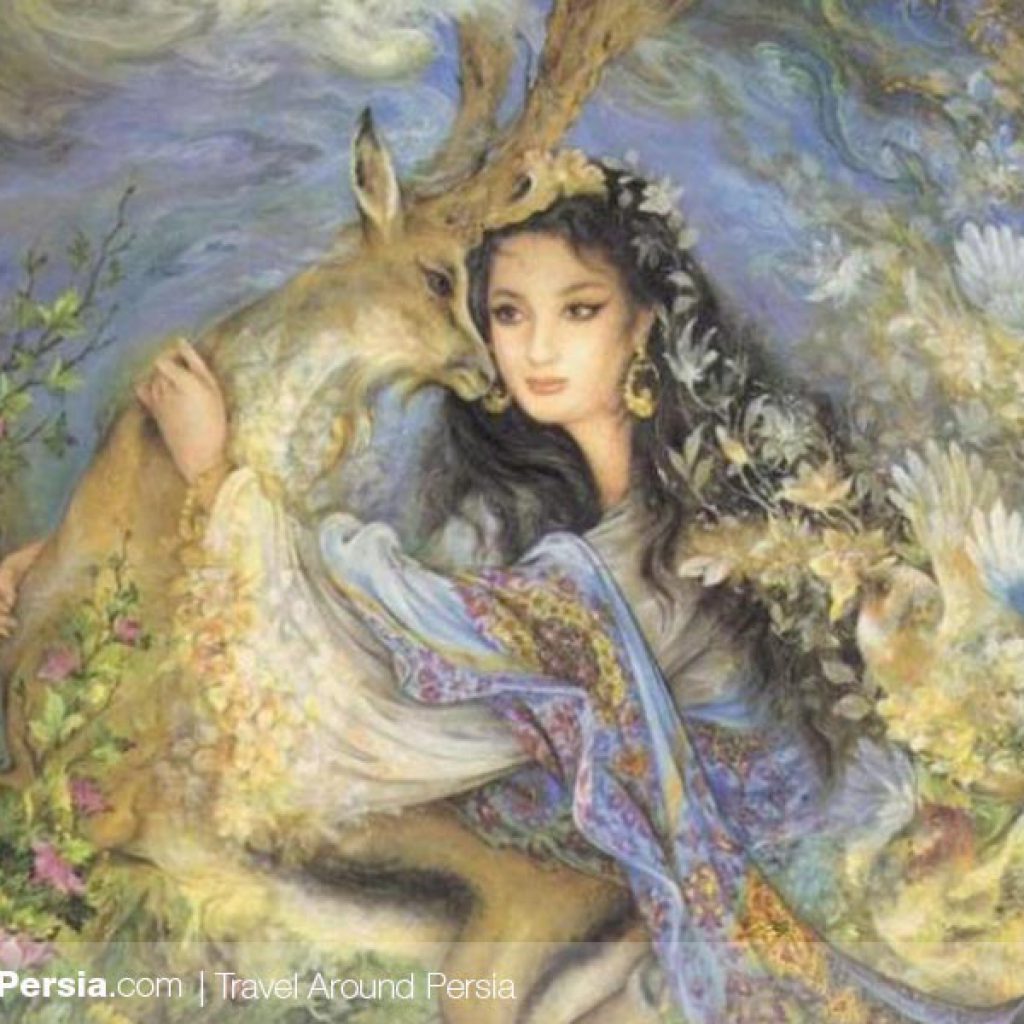 The former period was simultaneous with the blossoming of miniature in Tabriz. We can say that the flourishing of Persian miniature in Shiraz was partly due to Mongol’s attack on Iran; Mongols couldn’t reach this part of the country and Shiraz region remained safe.
During the ninth century AH, Iranian miniature painting became popular again. In this period, some well-known artists immigrated to Shiraz from Samarqand and Herat; therefore, Shiraz school gained much more maturity. 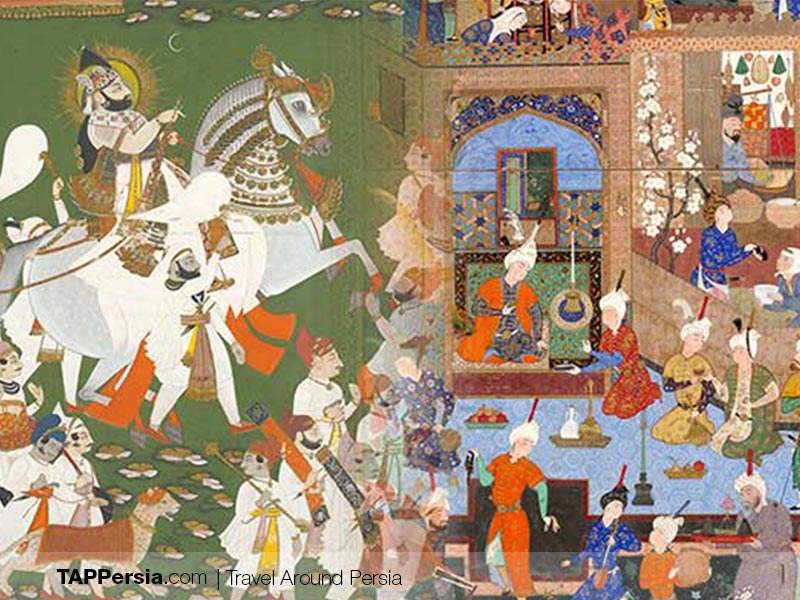 Baysanqor Mirza – Shahrokh’s son – brought together the best painters, calligraphers, bookmakers, and etc. as soon as his father came into power.
He had a great influence on the advancement of Herat school of Persian miniature, because he himself was both a belletrist and a calligrapher.
The most important works of the period include Kalila and Dimna and Shaynameye Baysanqori. We can name Mowlana Ali, Mowlana Qiyam Al-din, and Amir Khalil as the most influential artists of the period. 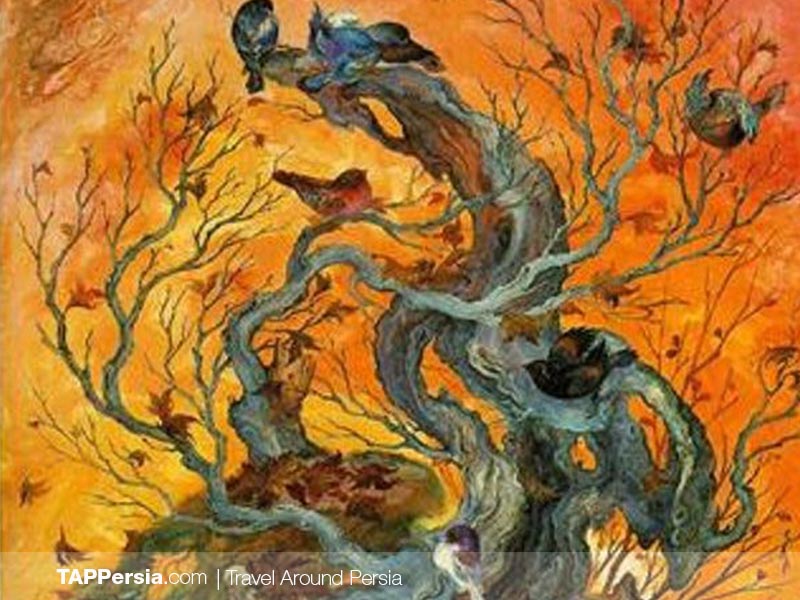 It won’t be irrelevant to say that the Safavid dynasty is the age of historical-cultural evolution and blossoming of the Iranian miniature and art. Shah Ismail-e Safavi, the first king of the dynasty, played an important role in the advancement of art in Iran.
There are a number of precious works belong to Tabriz school of Persian miniature such as Shahnameye Ferdowsi and Khamseye Nezami.
We should also name some of the most influential artists of Tabriz school such as Sultan Muhammad, Aqa Mirak, Mir Mosavvar, Sheikhzade, Doust Muhammad, Doust Divane, Mirza Ali (Sultan Muhammad’s son), Mir Seyyed Ali (Mir Mosavvar’s son), Mozaffar Ali, Khaje Abd Al-Samad, Khaje Abd Al-Aziz, Sheikh Muhammad, Qadimi, Abd Al-Vahab, and so on.

Shah Ismail II brought together some of the miniaturists of Tabriz, Mashhad, and Shiraz in order to revive the royal library and illustration workshop. He commanded them to create another version of Shahname as well. 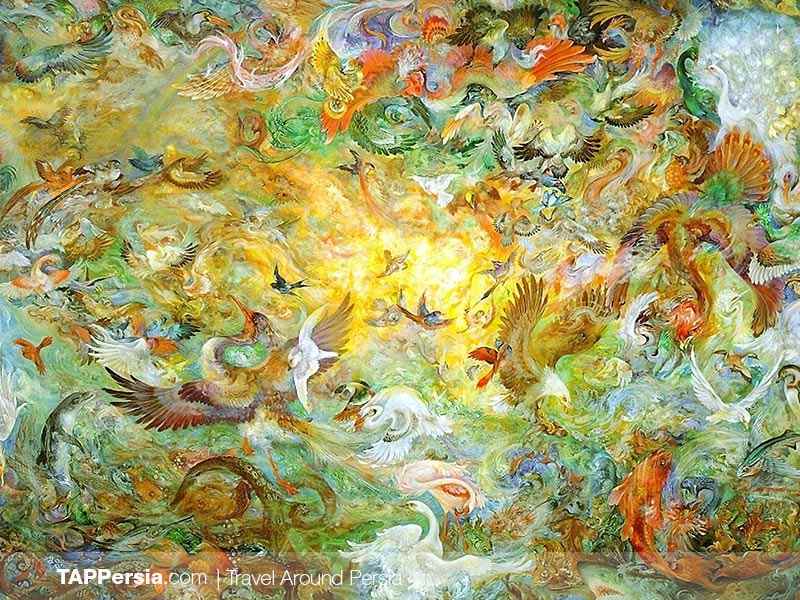 Some of the most important artists of this historical period of Persian miniature include Siyavash Gorjestani, Sadeq Beyg Afshar, Ali Asqar Kashani, Mir Zeyn Al-Abedin, and Morad.
We have also works such as Shahnameye Qavam, Shahnameye Qasemi, and Ketab-e Ahsan Al-Kebar as the memorials of the period. 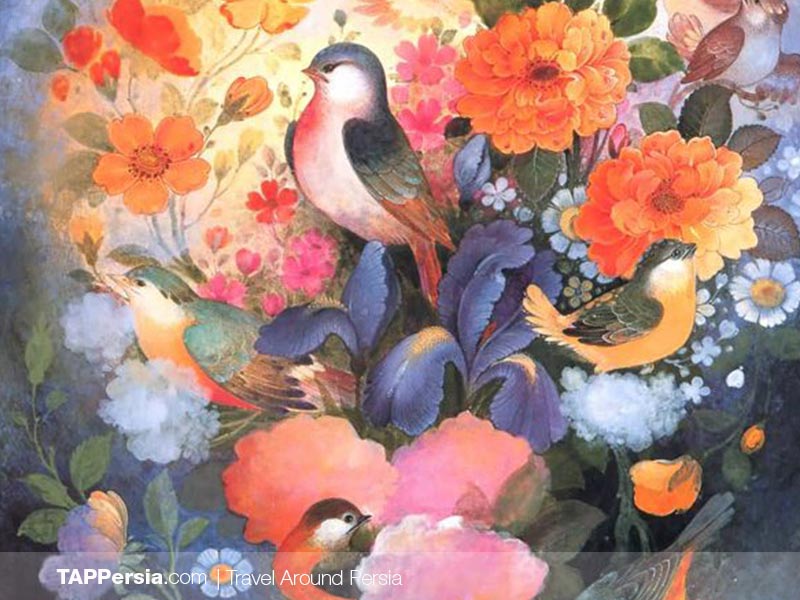 It was in the mid-eleventh century AH that Isfahan became the capital city of Iran. Therefore, artists from Qazvin and the other important cities immigrated to Isfahan. In the period, the mural became popular as well.
Besides bookmaking and mural that were exclusively advocated by the court, merchants and rich people ordered some particular works. The characteristics of these works can be summarized in less use of colors and simple backgrounds containing some foliage and linear drawings as well as some clouds without coloring.
The themes of the works of the Isfahan school of Persian miniature include the prince’s sculptures and women and gentlemen’s paintings. Thus, the art of portray and more attention to the details of human organs gained popularity.