Why Are Persian Rugs so Famous?

Iran is where art and culture first emerged. The majority of the world’s most renowned museums contain a variety of unique and ancient artifacts from Iran. One of the internationally renowned Iranian handicrafts for its quality, design, and pattern is a rug, which has caught the interest of several professionals from all over the world.

Iranians laid rugs under their beds to make them more comfortable, according to Greek historians. Iranian woolen carpets are mentioned as an imported commodity to China during the Sassanid era in a further historical record from China. Due to its breathtaking beauty, the famed Baharestan carpet in Ctesiphon’s Palace has also been extensively discussed in Islamic literature.

In any case, we will speak proudly about Iran and Iranian art so that this art of noble and artistic people shines more and more all over the world. 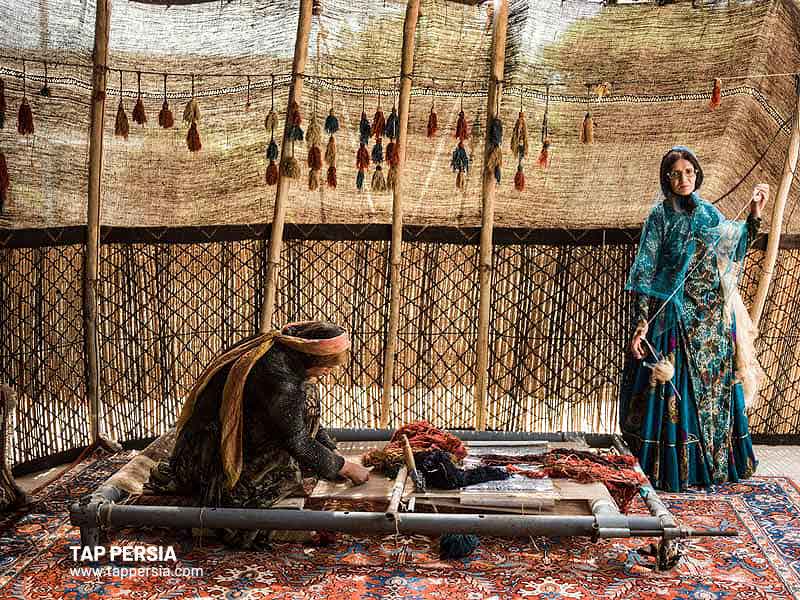 It is clear from the writings of various books that the practice of carpet weaving predated Christ. Iranians frequently take a nap on extremely plush carpets, according to historians, poets, and novelists. A quick study reveals that, in addition to our nation, the rug business and the craft of rug weaving are well-liked in nations like the Caucasus, Spain, China, Turkmenistan, Afghanistan, Pakistan, Turkey, Egypt, India, and even Romania and the Balkan Peninsula.

However, this skill is unique to Iranians since they were the first to use carpet weaving, and as a result, their work is renowned across the world. The Pazyryk Iranian carpet is said to be the first carpet ever made.

In Central Asia, the carpet has a long history that dates back to the fifth and sixth millennia BC. The Pazyryk carpet from Iran is regarded as the world’s earliest and oldest hand-woven carpet. This is one of the most famous Persian rugs whose texture is attributed to the Achaemenid period.

There is a very well-known carpet in the palace of Ctesiphon by the name of Baharestan, which has a lot of magnificence and elegance, is mentioned in Islamic literature, and has a broad reflection. Due to the beauty, art, accuracy and elegance of the carpet and rug texture, this art has always been of interest, and nowadays more attention is paid to its decorative aspect.

The Popularity of Iranian Rugs 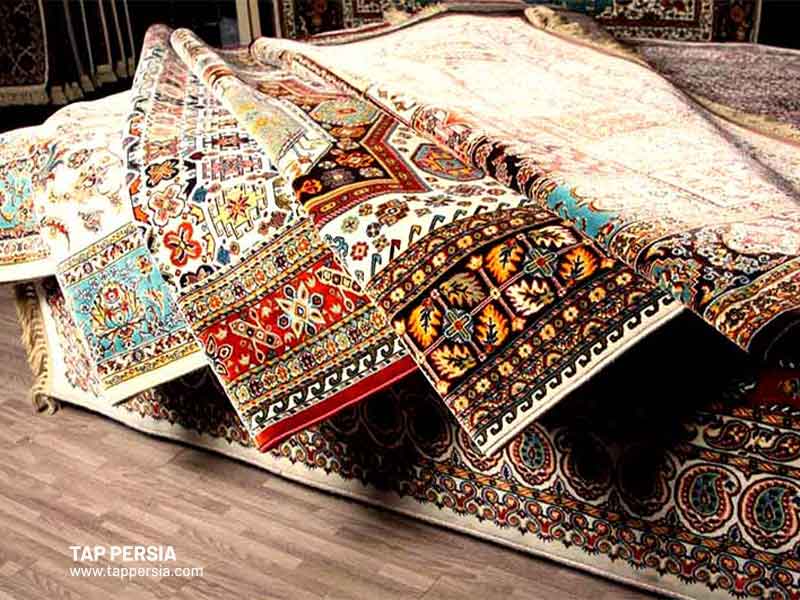 Iranian rugs offer more color options than rugs made in other nations, and the materials used to make them are of higher and better quality, as is the art of elegance, which is one of the primary reasons why famous Iranian rugs have attracted greater attention from consumers worldwide.

It uses unique elements, and the colors appear vibrant and authentic. Additionally, the patterns are lovely and have a distinctive catchiness that draws the spectator and the consumer in. These actions have all been successful in this regard and increased awareness of and interest in Iranian carpets.

There are many famous Persian rugs as a result of the cultural standing of various locations. These variations can sometimes be found in the kind of texture, design, warp thread, and wool used. Even though two rugs are made by the same weaver and share the same design and aesthetic quality, a professional weaver may occasionally be able to tell the difference between the two and declare the carpet to be two-hand woven, which is a flaw in carpet weaving.

Generally speaking, you should pay attention to the following qualities of a high-quality carpet:

·   Have twelve Wates of knots in one Cubit knot

·   The wool should be picked from the sheep’s back, not separated with lime

·   The sheep should graze in the mountainous and green areas

·   The color used must have a high degree of stability

The following should also be considered when buying a carpet:

·   Creating harmony in the colors of the carpet 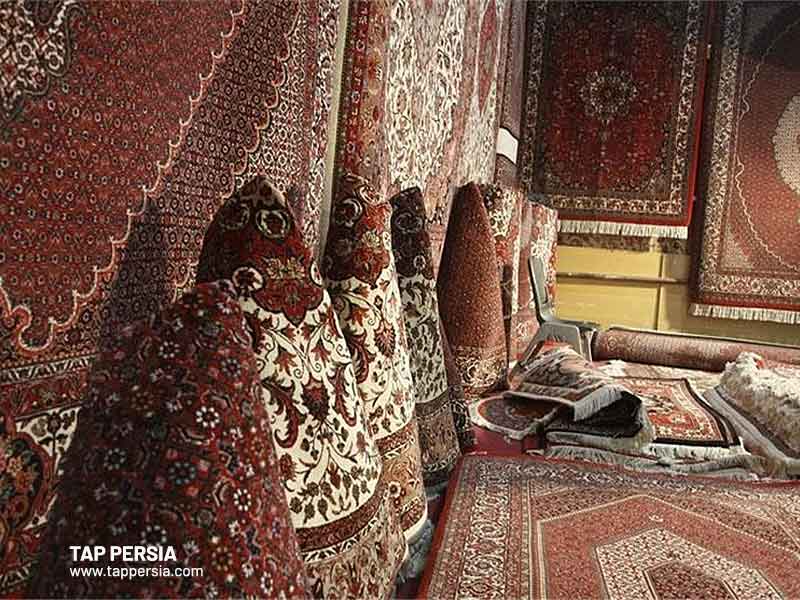 Many weavers from across the world adopt Iranian carpet designs, which are well-known worldwide. These patterns are a valuable standard in many famous Persian rugs and are highly heartwarming owing to their elegance and attractiveness.

One should look closely at the design and pattern of an Iranian carpet in order to identify it, making sure that only the most distinctive and regional designs are employed. Famous Persian carpets are woven using a variety of designs, each of which is exquisite in its own right.

Among the designs utilized for carpet weaving are Shah Abbasi historical artwork, designs, and Islamic architecture. Architectural elements and ornate forms are seen in historic artwork to influence the patterns.

Each of these designs has sub-branches that can be used in the weaving of the most beautiful and famous Persian rugs. The elegance in the design and pattern of famous Persian rugs is so much that it has dazzled everyone’s eyes, and the experts consider them to be among the best and most valuable woven carpets in the world.

We will now examine the various types of famous Iranian rugs: 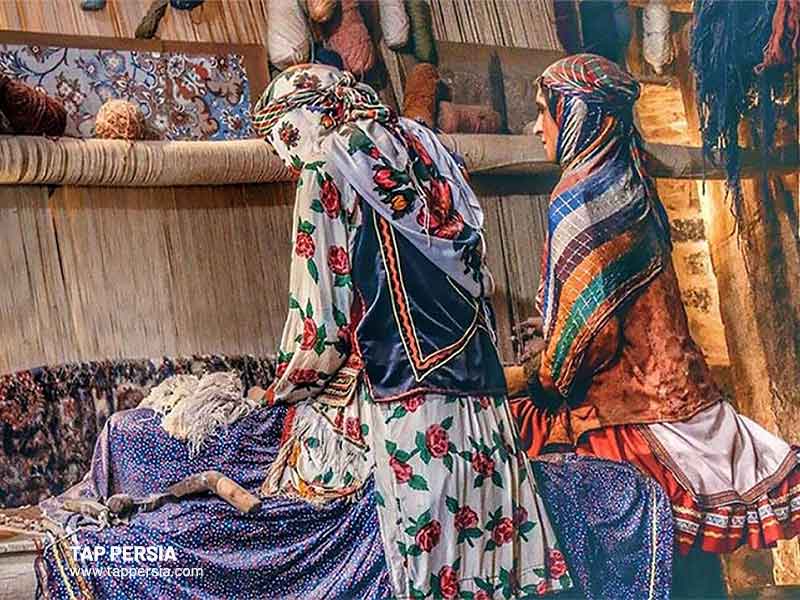 A hand-knotted rug’s pattern is the same on both sides, as you’ll see when you look at the underside of one. Undoubtedly, the pile underneath has to be removed. On the reverse of the rug, there won’t be a pile; instead, you can plainly see the knots. Usually, silk carpets have smaller, more compact knots. Silk rugs contain more knots per square inch than other types of famous Persian rugs because of the smaller knot size.

These carpets take longer to make because the weaver spends so much more time tying each individual knot. On the other hand, tribal carpets have more knots. These take less time to complete and have fewer knots. Each rug has a certain attraction of its own.

The way the fringe is linked to the rug’s body is another distinguishing characteristic of hand-knotted carpets. The fringe of a hand-knotted rug is woven into the fabric, not attached to the edge with glue or stitching. In actuality, it is a component of the rug that is created during weaving. During the course of weaving the rug, the weaver leaves a length of yarn on each side.

This is what a handmade rug’s fringe is comprised of. If you examine a hand-knotted rug attentively, you’ll see that each element—from the design to the knots and the fringe—variates in some way. These are only because they are handcrafted. It’s quite hard to manually duplicate each feature precisely. 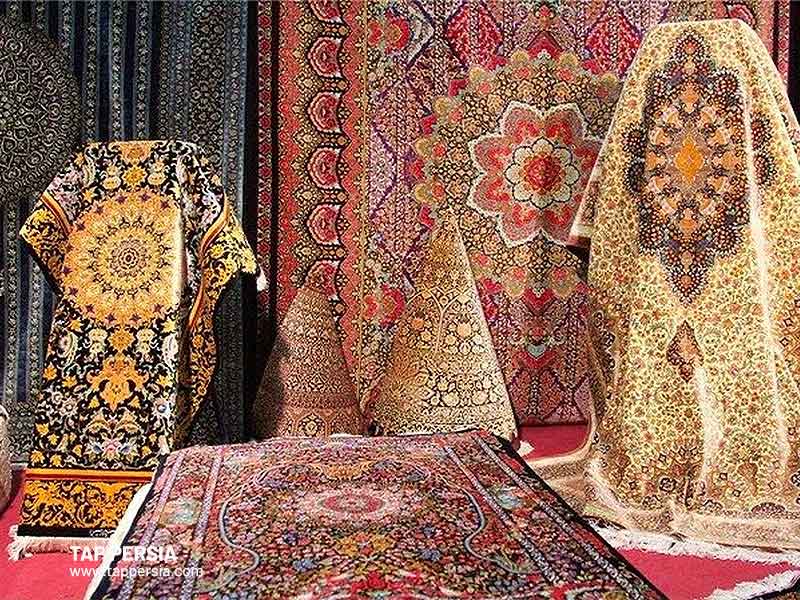 Like hand-knotted rugs, hand-tufted rugs may be identified by turning them over and looking at the underside. The backdrop of a hand-tufted rug will be made of fabric or canvas. This kind of rug has no discernible design on the bottom.

Rugs that are hand-tufted often lack fringe. If they do, you will discover that they are not a natural component of the rug but are instead glued or sewn onto the edges. 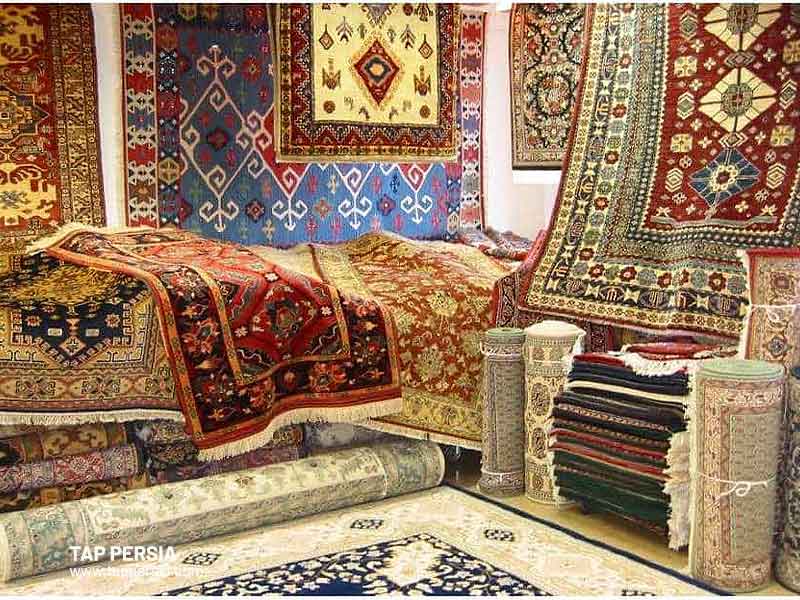 Most of the cities in our nation have manufacturers that produce machine-made rugs, but based on the facilities in some places, such as Kashan and Aran Bidgol, there may be more industries there. Iran’s machine carpet industry is said to be centered on Kashan and Aran Bidgol. Today, these towns are home to more than 700 production facilities that are working hard to produce carpets. A number of other cities, including Yazd, Mashhad, Dilijan, and Isfahan, are also involved in this sector.

Since the beginning of time, famous Persian rugs have attracted the attention and welcome of many people throughout the world. Today, Iranian goods are used in all nations, and our nation is one of the main exporters in this sector. Currently, the province of East Azerbaijan provides 40% of the nation’s exports.

By tying the strings, it is possible to synchronize the singing by changing the song’s word count to match the tying tempo. Because singing a song does not suit and is not balanced with the sound of hitting the shoulders, Iranian carpet weavers mostly sang when tying, quietened their singing while drawing the weft, and stopped singing altogether while beating the carpet threads.

There are several locations in Iran with a long tradition of producing high-quality Iranian carpets with a variety of designs, despite the fact that carpet weaving is an actual Iranian art form that cannot be restricted to a single region.

Among these locations with international renown and renowned for their famous Persian rugs are Kerman, Isfahan, Tabriz, Yazd, Qom, Kashan, and the nomads of our craftsmen. The Fars and Kashan Provinces’ “Traditional Carpet Weaving Skills” were added to the UNESCO Cultural Heritage List in 2010.

Tabriz, Kashan and Kerman became centers of famous Persian rugs from 1500 to 1650 AD. Carpets from these periods are kept in the great museums of the world, among them the Louvre and the Victoria Albert Museum. Many major museums in the world host the art of Iranian artists.