5 Of The Weirdest Cemeteries In Iran – Scary But Amazing

Cemeteries and tombs are kind of scary for most people. The majority consider them uncomfortable places to be especially when they are alone and when it gets dark. This is almost true about any random cemetery but how would you feel if you visit cemeteries with special features? Would it be curious or scarier? Today we are going to learn about Some cemeteries in Iran that have strange decorations, special architectures, and history. Indeed, all these factors make the cemeteries more mysterious and spooky rather than scary, maybe!  Let’s learn about five of the weirdest cemeteries in Iran, and then you can decide for yourself. 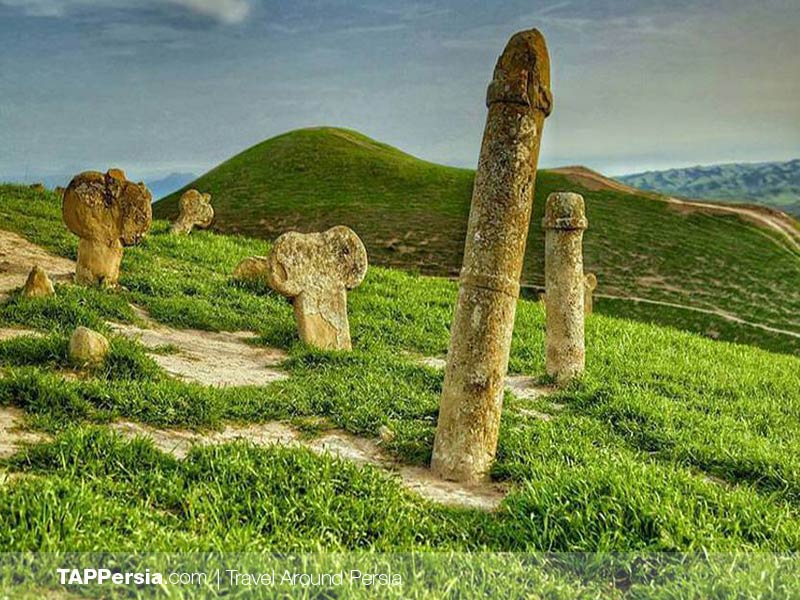 Khalid Nabi Cemetery and Shrine Complex consist of several pilgrimage places as well as a historical graveyard. This complex, which is located in the heights and mountainous areas of Golestan province, is the burial place of Khalid Nabi and also hosts numerous small and large stone statues. All these factors, along with the unique landscapes of the surroundings, have made this region an important tourist attraction in the north of the country. 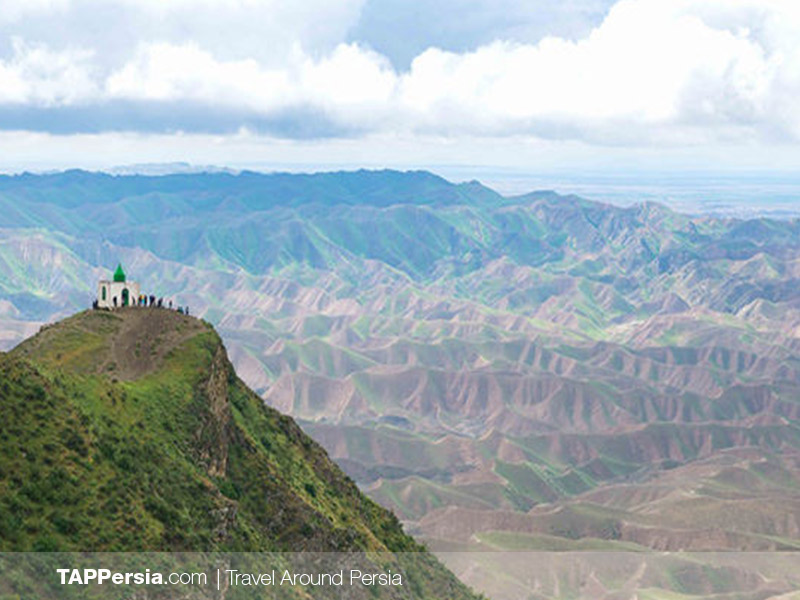 As mentioned, the Khalid Nabi complex is located in mountainous areas, 90 km from Gonbad Kavous, 62 km northeast of Kalaleh city, and 6 km from Gachisu village, on the top of Gogjeh Dagh mountain. The peak of Gogjeh Dagh Mountain, which is 720 meters high, is one of the mountain ranges in the region, which is also known among the local Turkmens and residents as the peak of “Ghodrat” or “Tangri Dagh”. This mountain range joins Baba Shamlak mountains in Maraveh Tappeh from the east, Hezar Darreh from the north and west, and Panj Shir valley from the south.

Due to the location of this 12-hectare area in remote heights, access to the cemetery and shrine of Khalid Nabi is possible only from Gonbad, Maraveh Tappeh, and Kalaleh. 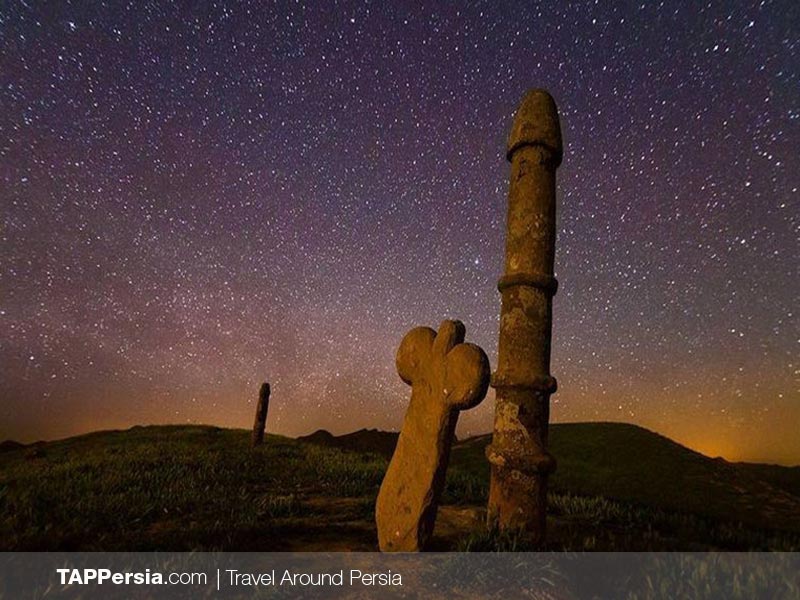 This complex, which is more than a thousand years old and dates back to the Paleolithic period, consists of two parts: the shrine of Khalid Nabi and the cemetery and stone tombs. According to the narratives Prophit Khalid lived during the Sassanid era (224–651).

A little further from the shrine of Khalid Nabi, on another hill in this area, several stone statues have been erected next to each other and scattered like a cemetery. According to documents and evidence, this historical cemetery dates back thousands of years ago. It also appears that the number of these stones was initially around 600.

According to the explorations, different theories have been proposed for the specific shape of these rocks. Some believe that large statues represent men wearing hats and sash around their waists. And that small statues represent women. Some have likened some of these stones to crosses. On the other hand, in another theory, these large and small statues are attributed to the organs of men and women. Almost all of these theories have been agreed upon one subject which is these stone statues have served as tombstones for the inhabitants of this region.

You should have in mind that it is extremely hot in the summer and really cold in the winter there. That’s why the best time to visit is April and May. 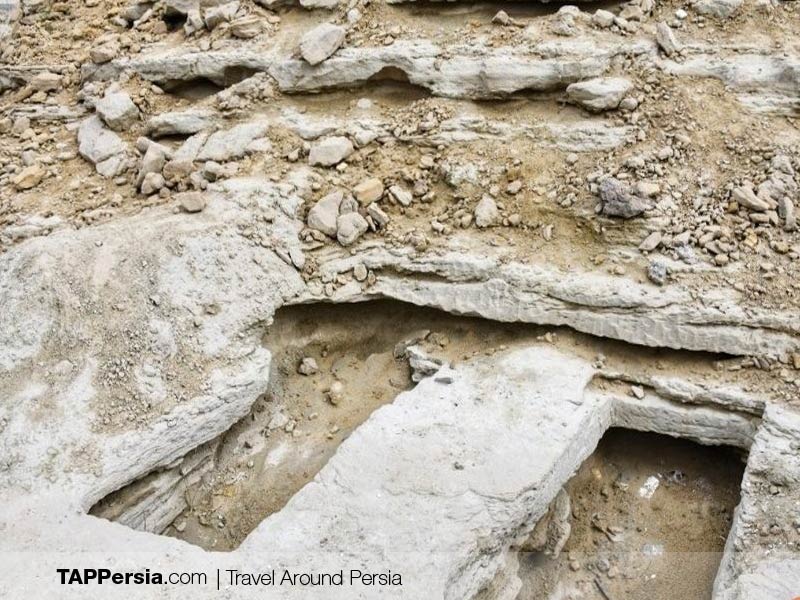 Jen is the word that Iranians use for goblins. So as its name implies, this cemetery is a scary place. This silent and mysterious graveyard is located in Tis village which is 2,500 years old. The cemetery with huge tombstones is one of the sights of Chabahar and an interesting place for adventurers who are interested in the supernatural world. Large and strange tombstones in this cemetery have made the locals believe that these graves are not human graves. In this cemetery, the graves are dug together on a rocky surface, which has raised many questions. Who dug these graves? Why did they choose the stone surface for digging? By what means was it dug? And finally finding no answers has led people to supernatural world or maybe superstitions.

All the graves have been dug at the foot of the mountain and in the heart of the rocks. Despite the passage of time and the destruction of graves by wind, rain, and other factors, many graves still remain in this place. The tombs are made in large and small sizes. 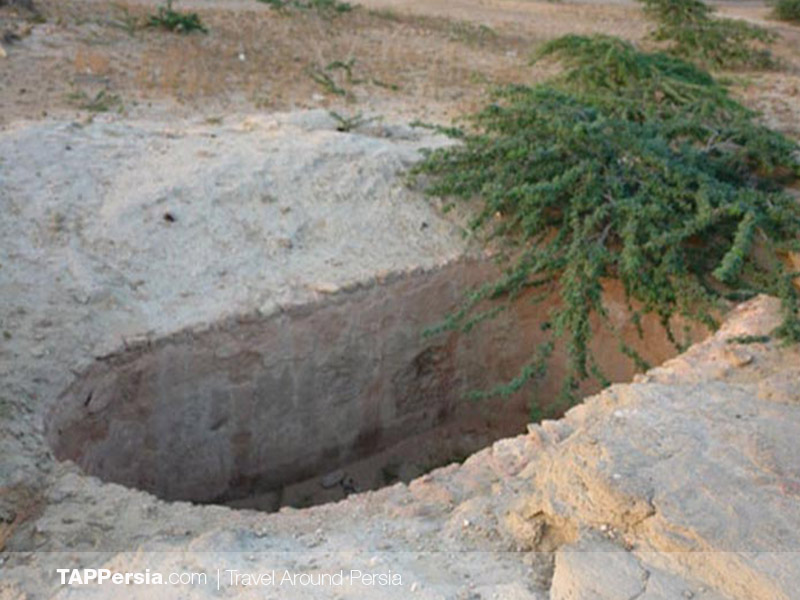 Tis village is in Chabahar city, in Sistan and Baluchestan province. This cemetery is located 300 meters west of Tis village in the south of the Portuguese castle and was registered as one of the Iran national heritage sites on November 4, 2007. 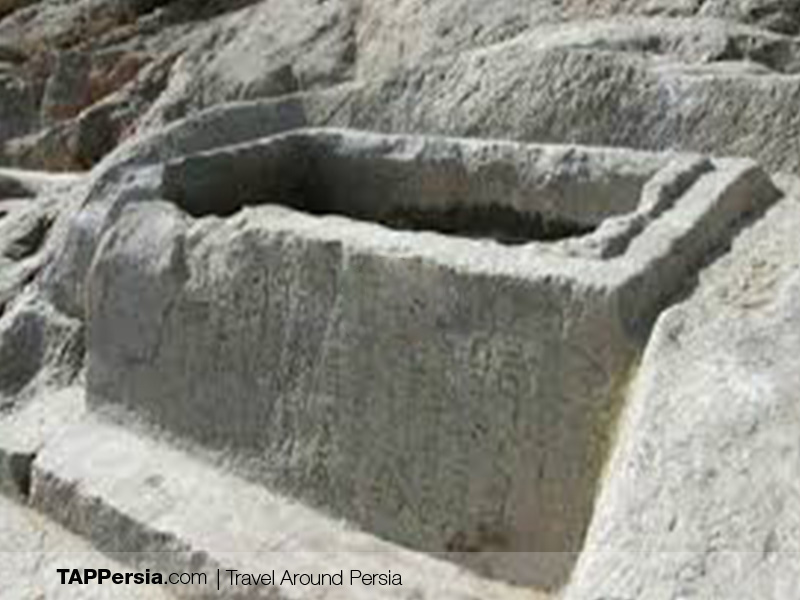 The exact time of the construction of the cemetery is not known. The appearance of the tombs shows that these works belong to very distant times. According to some narratives it belongs to the 4th century AH up to the Safavid period. In the middle of this burial ground, there is a completely intact and old grave that is 225 cm long and 110 cm wide. There are also traces of such graves in the foothills of Shahbaz mountains in Markazi province. 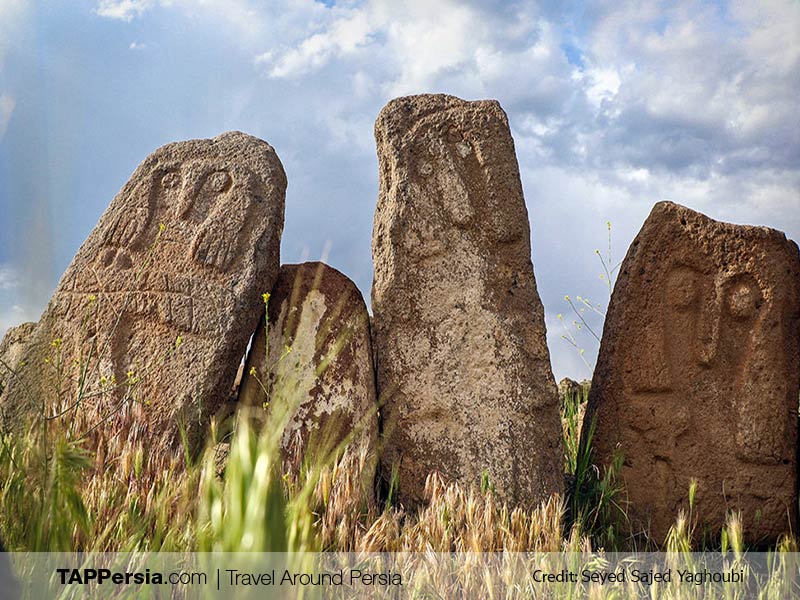 Shahriri cemetery is located in an ancient region with the same name. This historical area is 400 hectares and consists of three parts: military fortress, temple and Qosha Tappeh. The cemetery contains 280 ancient engraved tombstones that are estimated to be more than 8,000 years old. These tombestones with different heights of 70 to 360 cm are mostly carved in human shapes. The human carvings on the stones are in the form of people with hands on their chests and usually without mouths. However, only one carved statue of a woman has been found with a mouth. It is intresting that so far only seven pieces of this type of stone have been found in the Hakkari region of Turkish Kurdistan and one in Azerbaijan. 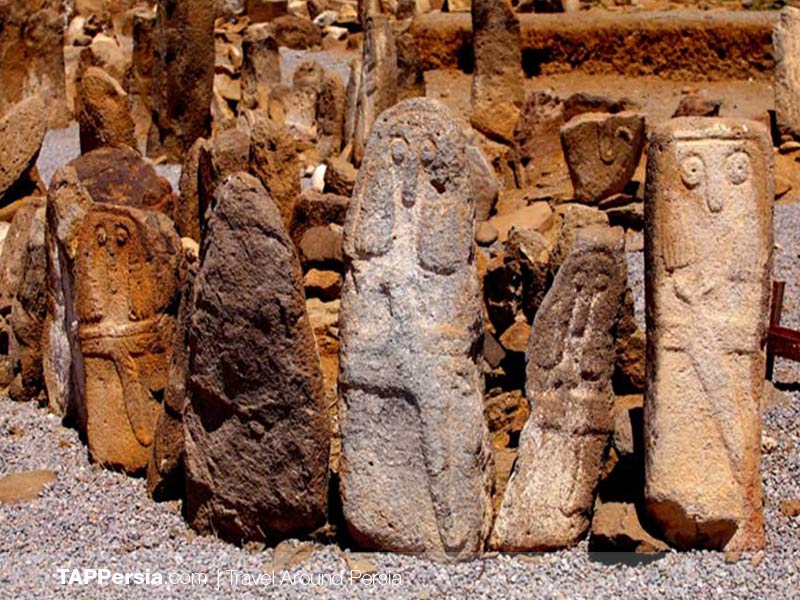 Shahriri ancient site is in Meshginshahr city of Ardabil province, next to Arjagh village. Shahriri cemetery is located 65 km from Ardabil and 31 km east of Meshginshahr along the Qarasu River. 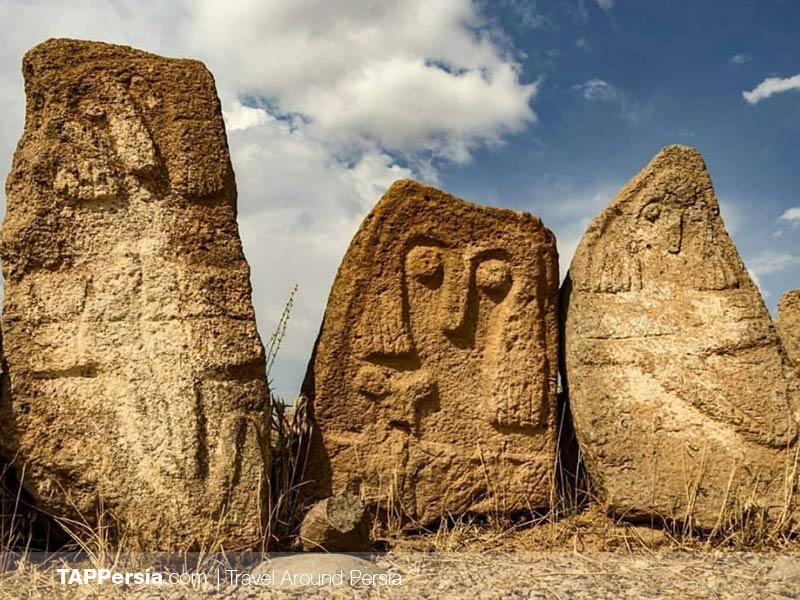 These outstandingly strange tombstones date back to the Late Bronze Age, Neolithic, and Late Copper, and Early Iron Ages. Something about 9,000 to 8,000 years ago. The castle and the temple date back to 1450 BC and Qosha Tappeh to 7,000 BC. Charles Bernie first began excavating the site about 10 years before the Islamic Revolution (1978). 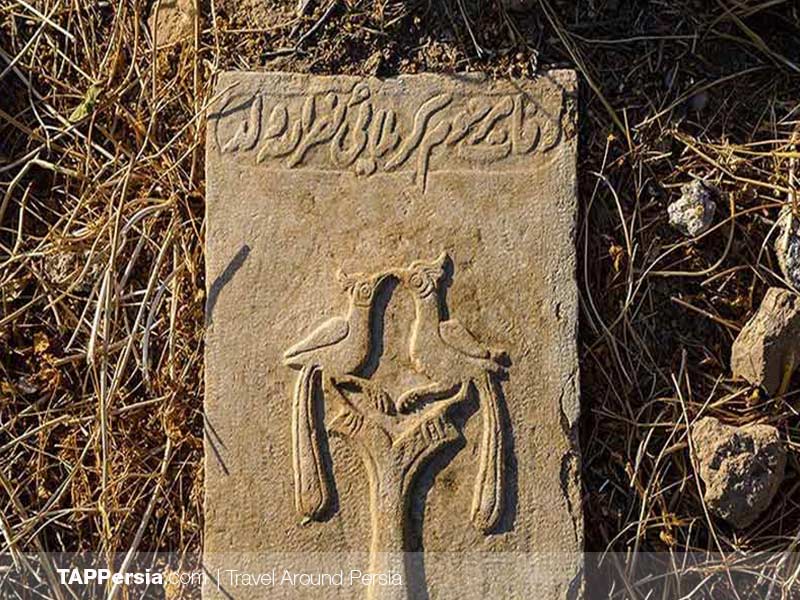 Dar al-Salam Cemetery is popular as Dar al-Salam of Shiraz and also Wadi al-Salam cemetery. It is one of the oldest burial grounds in Iran. You can find the graves of many great scientists, literates, and mystics of historical periods (from the early centuries of Islam to the present day) in it. 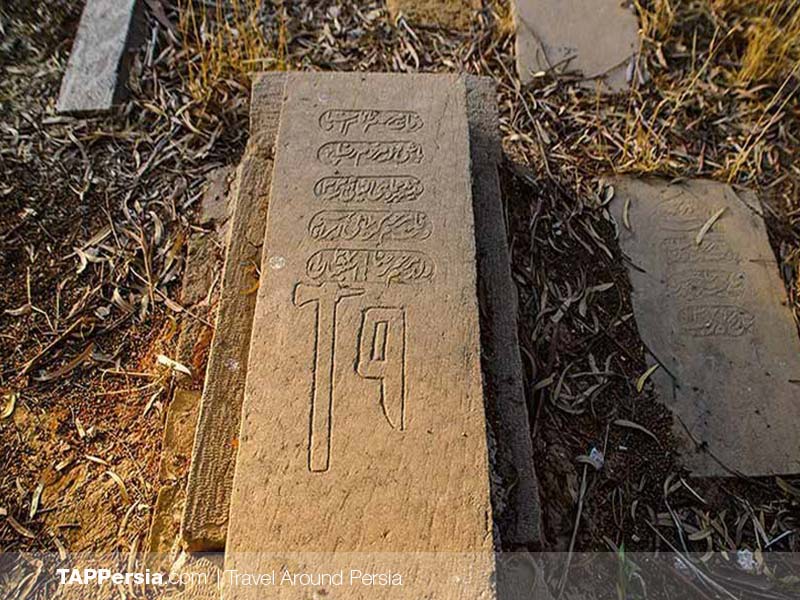 The tombstones, the type of literature used on them, the type of sculpture and carvings, and finally the characters buried in this old cemetery, each individually represent the values ​​of this place. The old tombs have carvings of linings in Kufic, Naskh, Nasta’liq, and so on. And some of them have engraved images of scissors, combs, mirrors that are a clue of the dead person’s job. You can also find engravings of cypress, sometimes alone and sometimes with other features such as birds and fruits. The majesty of the lion statue and the way they placed on the tombstone is very interesting. The stone lion shows the heroism and chivalry of the deceased or maybe their great position in the tribe. 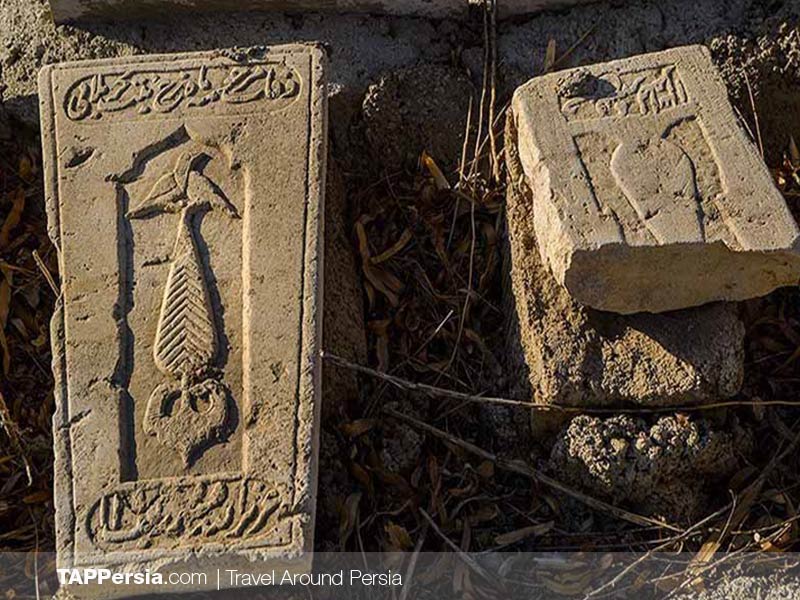 There are tombs from the first and second centuries AH. Of course, many scholars believe that this cemetery existed before Islam. 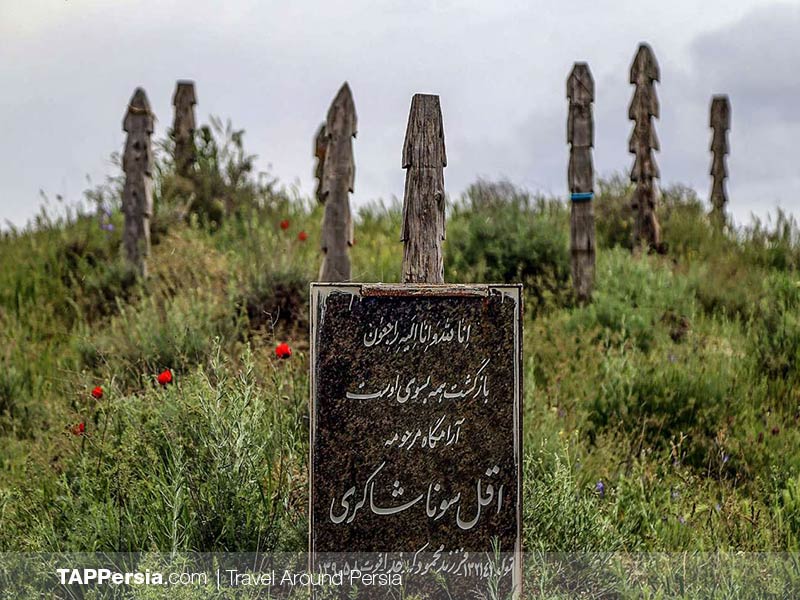 Baghlaq cemetery exists in Baghlaq village and is one of the oldest cemeteries in Khorasan province. There is a considerable distance between the village and the cemetery. To visit Baghlaq burial ground you need to climb up a hill. When you get there the vertical wooden sticks that contain the details of the deceased will catch your eyes. 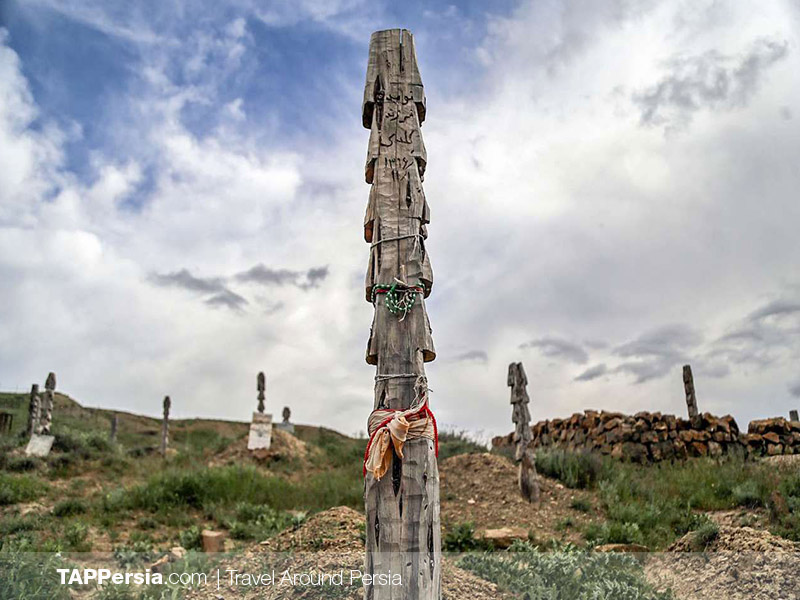 The Turkmen village of Baghlaq is located in the Jorglan region of North Khorasan province. The information about the history of this burial ground is not yet at hand. but we will update as soon as we can receive some info about it.

Today we just had a small trip to the five of the weirdest cemeteries in Iran. They are also on the less-seen list of Iranian tourist sites. I hope this journey was wondering and interesting for you. If so please let us know in the comments. And for more information or to book a tour to visit these outstanding cemeteries in Iran you can reach us via the contact information below the same page.