The Ancient City of Susa

When we think about the oldest civilizations in the world, we may not imagine a very developed life but in fact, they had some improvements that can still amaze us. The humans have the ability to be innovative at any time. If you’re interested to know about one of the oldest cities in the world, simply follow this article. Susa, a city aged 7000 years is placed in the lower Zagros mountains, in Susiana plains between Karkheh and Dez Rivers. In other words, it’s located in eastern side of Shavur River, northwest of Khuzestan Province. Surprisingly, archaeologists have even found the documents of a 7000 year old ancient village, which is still under research. Susa also became a favorite residence for Elamite, the old civilization, about 2700 years ago and it kept being the capital of Elam until the end of Achaemenid Empire.

During these years, Elamites earned many achievements in writing, architecture, sculpture, melting glass and metal, which helped the latter promotions. The special case about Susa is that its history is documented and there are strong evidences about the city’s evolution. Even after Achaemenid conquered Susa, it kept progressing. The kings started to construct lots of magnificent buildings and as Susa was the center of the kingdom for several centuries, many authorities from other countries came and observed the city’s advancement. Also as the city lies 150 km from Tigris River, near where Mesopotamia civilization positioned, they used to exchange their developments with each other. Elamites ended when the Assyrian King, Ashurbanipal, attacked Susa and destroyed the city.

One of the wonders of Susa in the Elamites time is “Chogha Zanbil” ziggurat ,aged 3200 years, the greatest and most intact ziggurat in the world. In fact, it was the temple of Elamites and a symbol of their art and architecture nowadays. There used to be 7 gates around the ziggurat and it’s supposed “seven” was a holy number for Elamites. There are lots of inscriptions with Elamite’s alphabets on its bricks. The ziggurat had five floors and the highest floor was the place of Inshushinak, the God of Elamite. The point makes it distinguished, unlike the other ziggurats, every floor is separately established from the ground and they’re not built over each other. One of the most beautiful ancient buildings of Iran is this Ziggurat, which has been registered on UNESCO World Heritages. 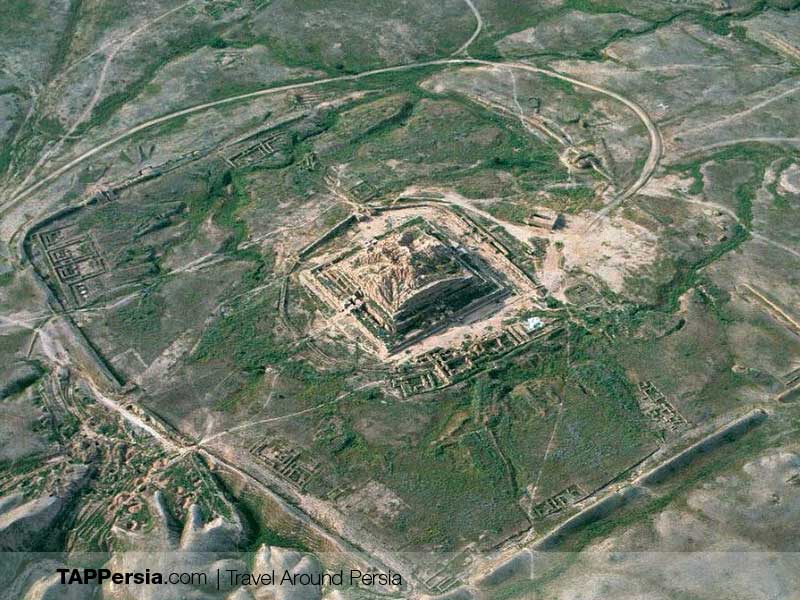 After Elamites collapse, Susa kept going down for some time, but by the advent of the greatest dynasty in the area, Achaemenids, Susa got its credit and glory again. Achaemenid kings established many magnificent buildings in Susa, as Cyrus the Great said in an inscription: “I built the Susa Palace by Ahura Mazda’s (Zoroastrians’ God) help”. After awhile, Achaemenid soldiers started to pass the Susa plains by their horses, in order to conquest Egypt and Greece, all world was overshadowed by Susa’s events. Finally, Alexander the Great, king of the Greece, attacked Iran and defeated Ario Barzan, his army destroyed many constructions in Susa and the city never got its splendor back. Later, Susa became a part of Seleucid Empire and a business center, where was governed independently until the Parthian time. 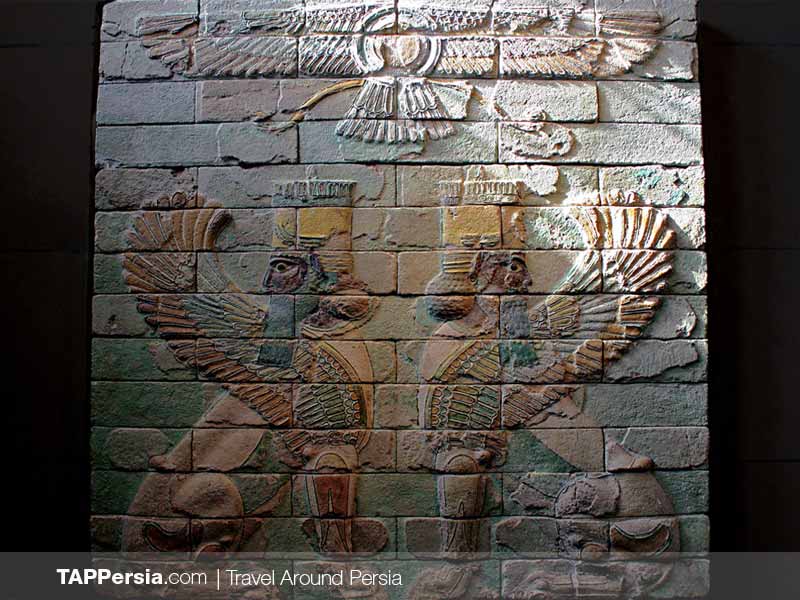 Apadana Palace is one of these remarkable buildings which is built by King Darius the Great in the Achaemenid time. It used to be the main palace of persian king Darius I. The architecture is astonishing and it has different sections like hall, living room, yards with pillars and the gate. You can see the design of lions, four-meters in length. The palace’s inner walls were made of glazed bricks, decorated with designs of the army (the immortal soldiers), the flying lion and blue waterlily. This complex had many rooms and until now, 110 ones are discovered by archeologists. Nowadays, some works belonging to this palace are being kept in different museums especially Louver Museum.
Shavur Palace
This palace lies in the west of Apadana Palace. It’s also called Artaxerxes’ Palace as it was built by the order of the Second Artaxerxes near Shavur River. The monument consists of a vast hall with 64 columns, which are similar but shorter than Apadana Palace’s. 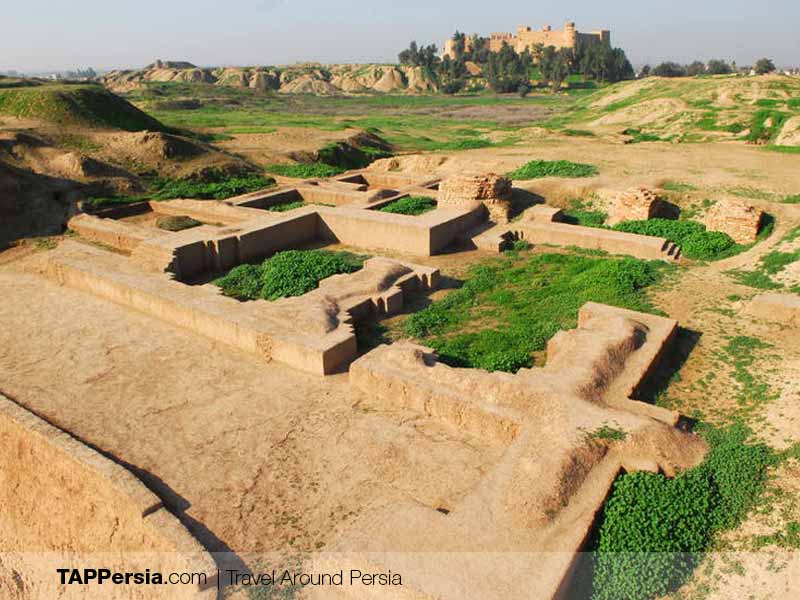 Susa was an economical center of silk production and export. In the beginning of the Sassanid time, a chaos arose in the area, which was suffocated, when Shapour attacked the city by giant elephants.

The Greatest buried city was founded by Shapur II and is a testimony of the Sassanid dignity. Iwan-e Karkheh is located 25 km from northwest of Susa, near Karkheh River. In 1950, the city was discovered and excavated by a group of archaeologists. Nowadays, only a small section of city has remained and one of its historical valuable features is the high walls. The city’s architecture was inspired by Roman style.

Based on Susa geographical location, the climate is hot and dry, as it’s reported the average temperature can be 12c in winters and 35c in summers. The main water sources of Susa are three rivers called Dez, Karkhe and Shavoor which were used for agricultural purposes too. Susa is also renowned for special products like pomegranates, sugar canes and silk. As it’s one of the first art origins of the world, you can follow the art evolution in recent discovered handicrafts like paintings, carvings on the wood, marquetry, pottery and filigree.

Prophet Daniel was one of the Jacob’s descendants, who lived in Babylon in 7th BC. After some time he immigrated to Iran with a group of Jews and chose Susa for living. It’s said that he was 83 years old in the third year of Cyrus’ Kingdom. Most historians believe his mummified body was buried in the east of Shavur River in Susa. Nowadays you can visit the tomb, which has an eye-catching turquoise facade and buff coloured dome. The conical two shell dome dates back to Seljuk era and is considered as a sign for the tomb. 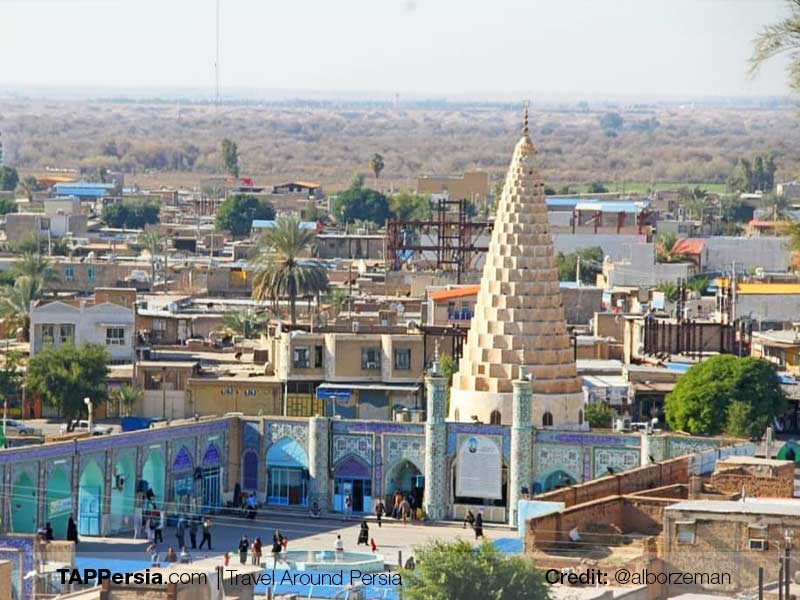 Marcel-August & Jane Dieulafoy were a French couple, who travelled to Susa in 1881. Marcel was an archeologist and a civil engineer. He took notes of his observations in Susa and Jane published them in two books. Her memoir is called “At Susa, the Ancient Capital of the Kings of Persia’’. In a part her book, she says: ‘’The discovery of cattle sculpture (the capitals Apadana palace) has made my husband happy, but at same time he is very sad and worried. Because the cow’s body, which is cut from a marble piece, weighs over 12,000 kilos. We do not yet estimate the weight of the pillar and we do not know how we will succeed in getting these heavy pieces to the beach. It’s really impossible to shake such a huge mass.’’
Finally, Mrs. Jane Dieulafoy took an unreasonable decision and broke Iran’s historical masterpiece. ‘’At last I couldn’t control my anger, I took a sledgehammer and attacked the rocky animal, I stabbed it brutally, and capital broke up as a result of the bowls of the slaughter like fruit.’’ The French group took the artwork to Persian Gulf Coast and shipped it to France. That’s why you see a broken sculpture in Susa pictures.
Later, another French archeologist, named Jacques De Morgan travelled to Iran and did lots of excavation in Susa. He discovered many valuable pieces of ancient Persia like the flying cow low relief, which dates back to the Achaemenid time, 5th BC, taken to France. The famous Susa castle in Susa is also constructed by De Morgan, made of the ancient remained bricks in the region. 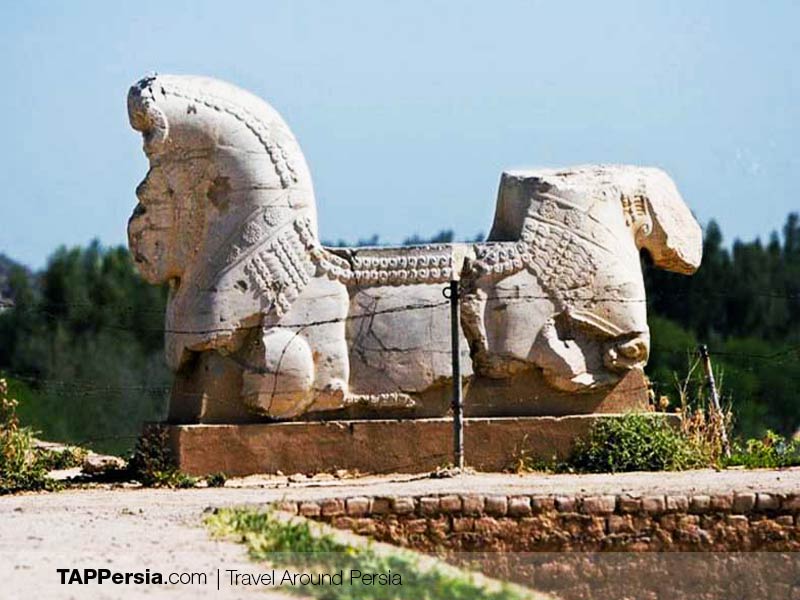 Overall, there are many must-see sites in Susa and by traveling there, we can find out about the process of urbanization and how humans got involved in social, cultural and economic complexity. As it all belongs to one of the first civilizations in the world, you’ll be wondered by the knowledge of technology, architecture and art that people had that time. 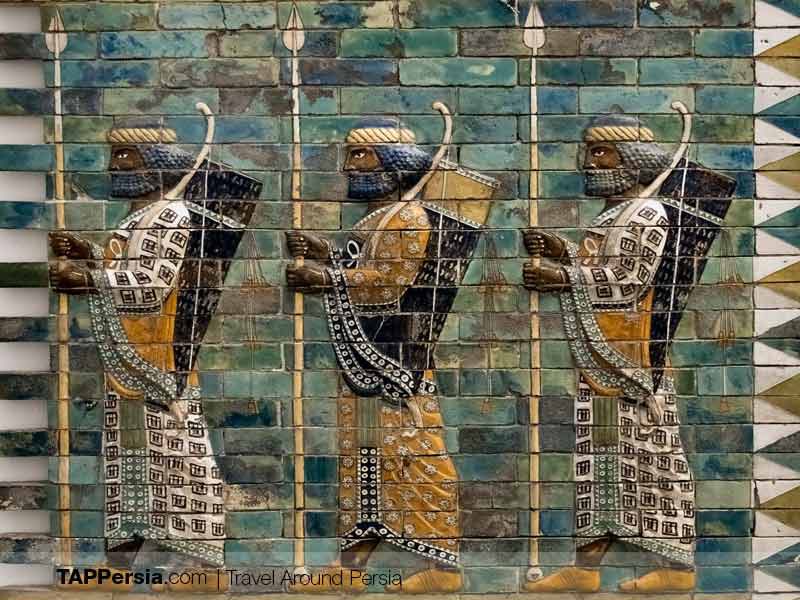 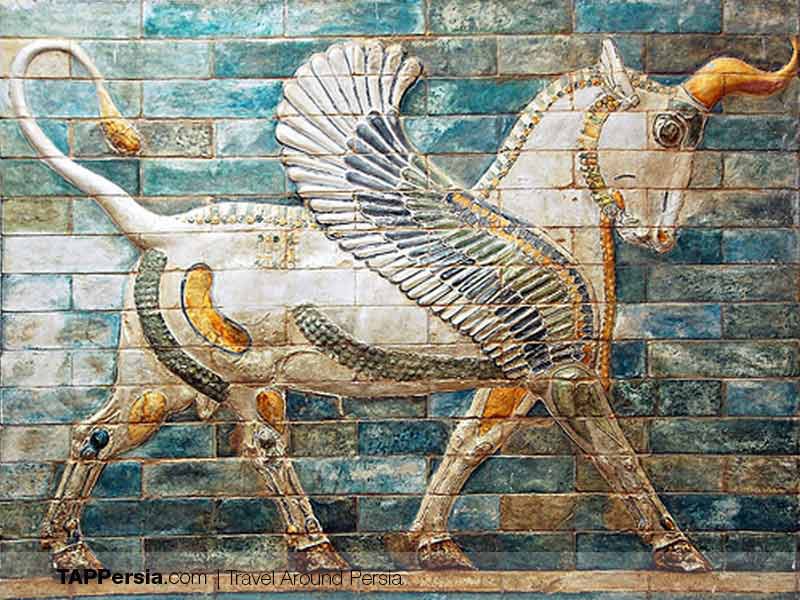 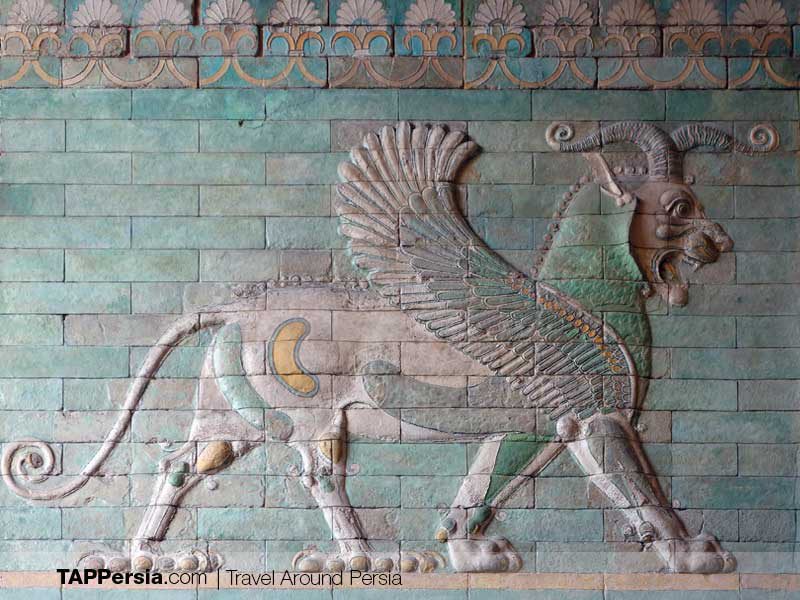 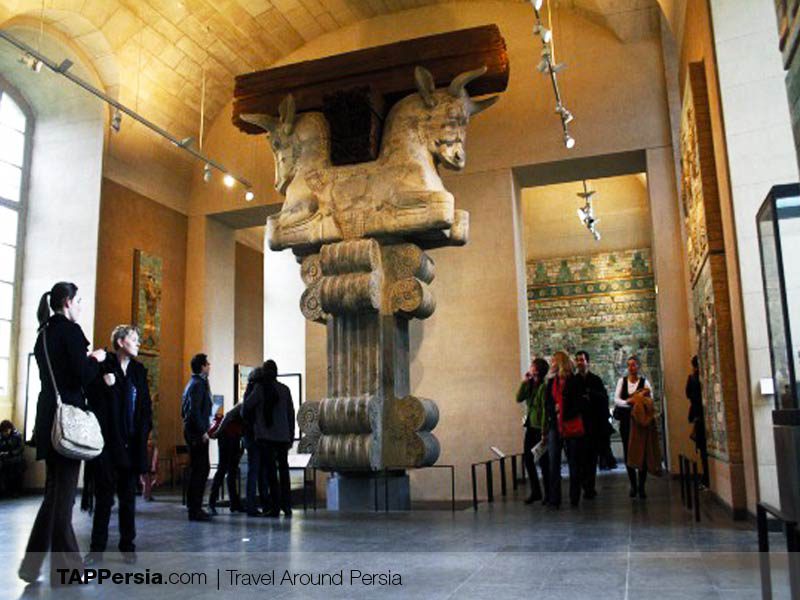 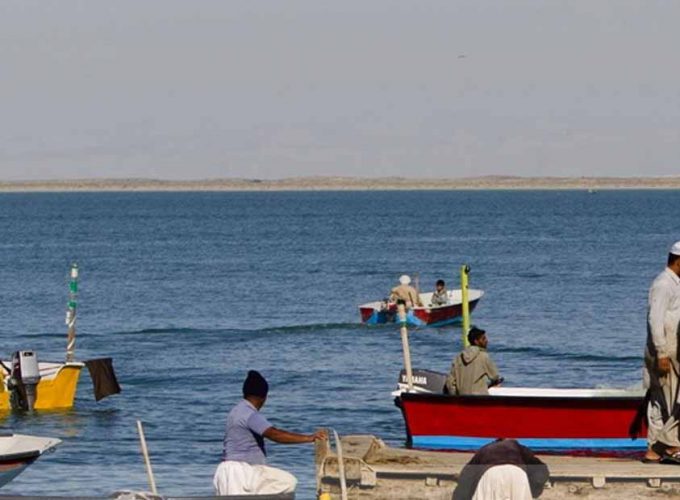