In the heart of Rasht, the capital city of Gilan province is located one of the most beautiful square plazas in Iran, Shahrdari Square. This square plaza is one of the top Rasht attractions. Shahrdari Square and the buildings surrounding it originate back to the early years of the Pahlavi Dynasty (1925 – 1979). There are several public buildings around this busy plaza. The most important building is ‘shahrdāri’ which means municipality. Other buildings are the Post and Telegraph Museums, the National Library, and the Former Provincial Government of Gilan. 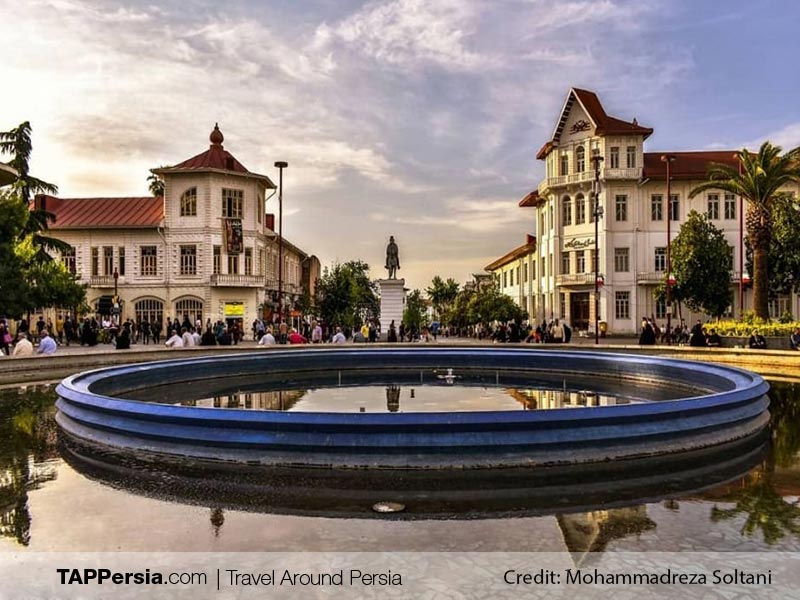 Nowadays Shahrdari Square is so much different from what it was like when they first built it. Change is inevitable and sometimes they are good, as the latest changes to turn the streets around it to walking pavements where no vehicles are allowed. That’s why you can walk around freely, with peace of mind, enjoy window shopping, purchasing, meeting new people, and having fun. 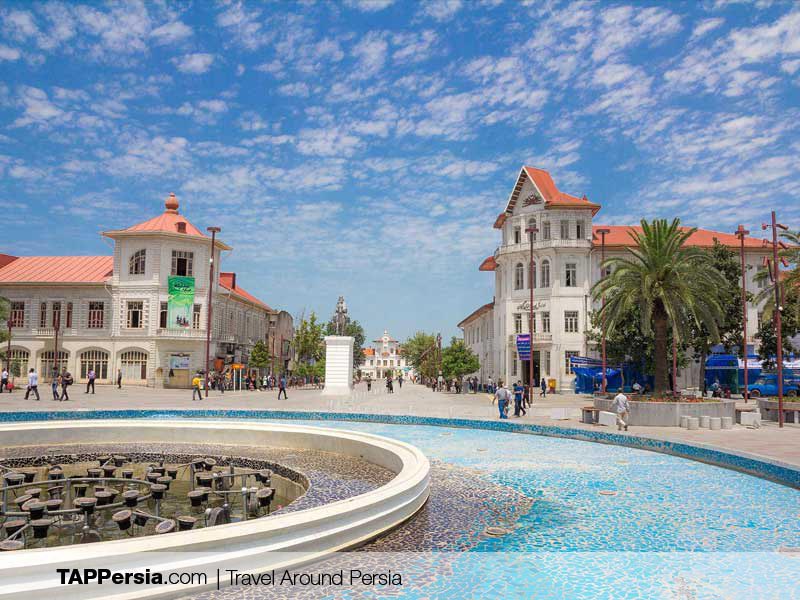 The changes have made the place a perfect spot to get together, walk around, shop, and have fun, especially at night. All surrounding official buildings have magnificent lighting decorations. For your long night excitement the spot with nice views and people around, many BBQ stands for Kebab, snacks, corns and etc is a great choice. You will make a lot of new friendly friends. There are a lot of Street Arts and Music bands on every corner to make the square life more vibrant and charming.

Today there is a big fountain in the middle of the square and the public buildings surrounding it.

The main building which the square is called after it is the “Shahrdari” building. Shahrdari is the same as the municipality. Shahrdari building with its clock tower is really exquisite. Its design is inspired by Russian architecture from Saint Petersburg. It is the same about the other public buildings in the square, too. 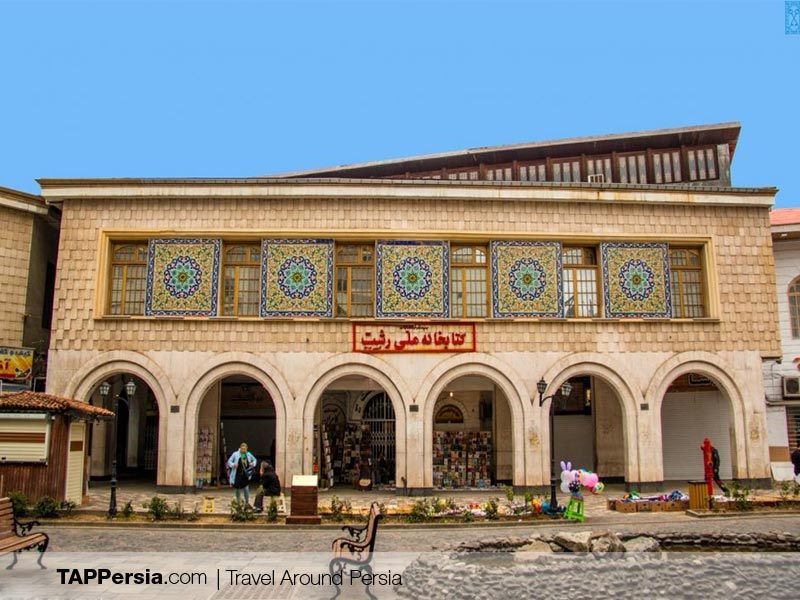 Rasht National Library is the first national library in Iran. 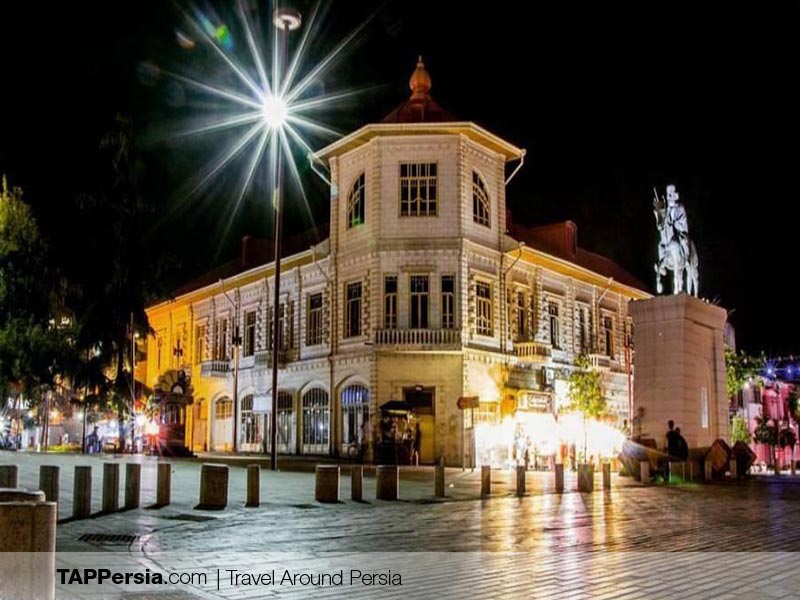 One of the most attractive buildings in Rasht Shardri square is the former Iran Hotel building. Although one day it was a host to many high-ranked people, unfortunately, it has been abandoned since many years ago. 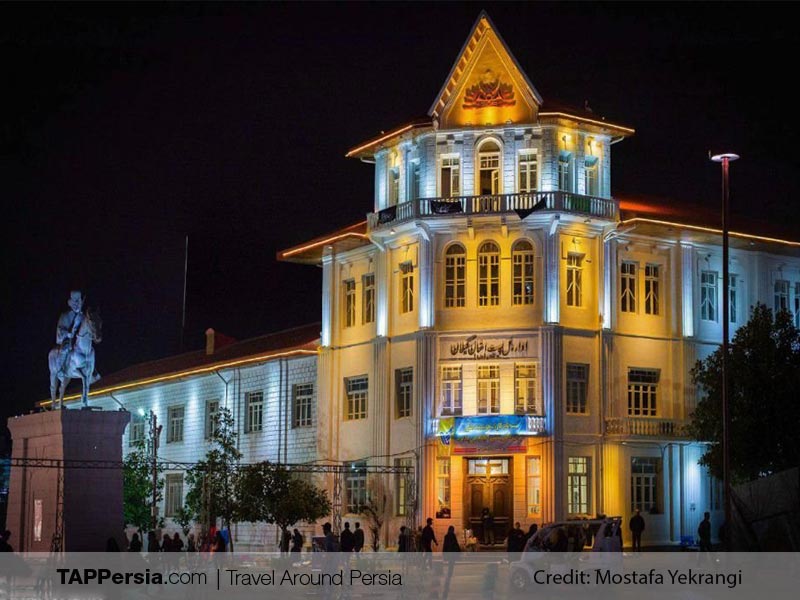 This building located on the northern side of the square had been using as a post office till a few years ago. Anyway, after that, they turned it into a post and communications museum. It has been on the Iran National Heritage List since 20 years ago.

Sepidrood cinema is another old building of Shahrdari square. At first, it was the forum hall but later on, they turned it into a cinema. Moreover, Sepidrood is the name of one of the main rivers in Gilan Province. 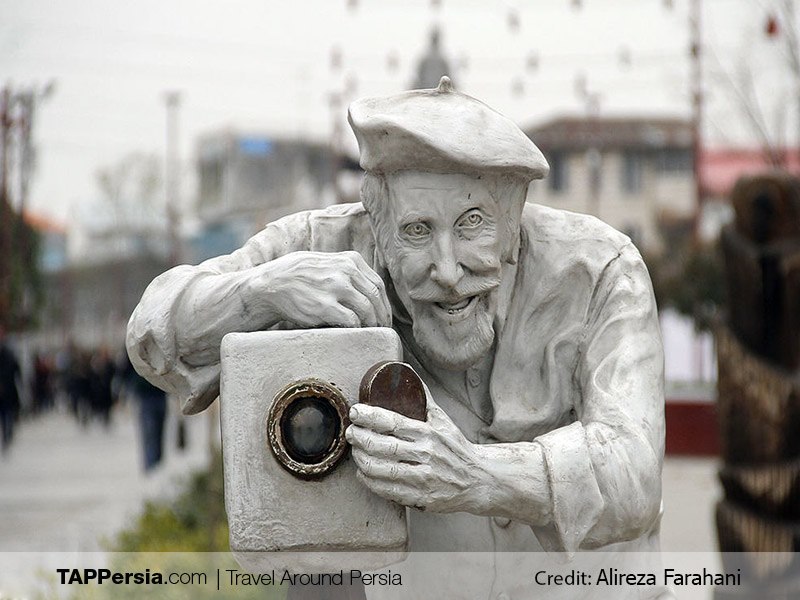 While walking in Shahrdari Plaza and paved streets around it you will notice big and small statues which are a symbol of Rasht and Gilak people’s culture.

Winner Of A’ Design Award And Competition in 2017

A’ Design Award And Competition is one of the biggest in the world and according to them, the architect has done a great job in turning a high-traffic, spiritless and unsafe place to a non-traffic, lively and safe place. After paving the square and streets around, Shahrdari square plaza has become the stamping ground of Rasht people and the tourists who bring vibrancy and liveliness to the place.

History Of The Shahrdari Square Plaza 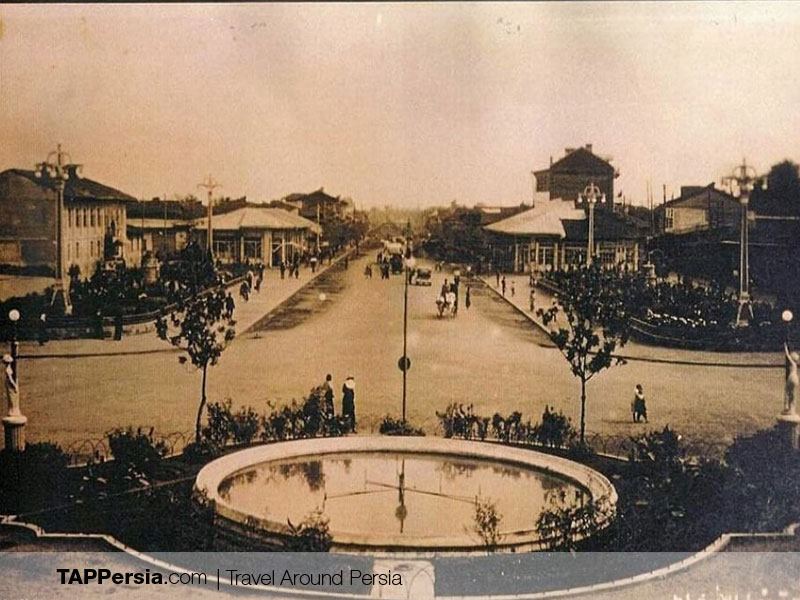 Rasht city was one of the first cities going through modernity movements during the Pahlavi Dynasty, early in the 20th century. If you take a more careful look you’ll see the City hall building located around the center of the plaza, while in traditional Iranian cities you will find a central mosque in this position. And these changes were all due to being close to Russia. Therefore the first bank branch, national library, theater, bus, and the first railway station in Iran belong to Rasht. The municipality was also a brand new facility that was built in Rasht long before many other cities in Iran. This gave the city a modern identity. Little by little other offices were built around the square and then the square became the beating heart of the city. With 7000 sq. meters area, it became the first Shahrdari Square in Iran. 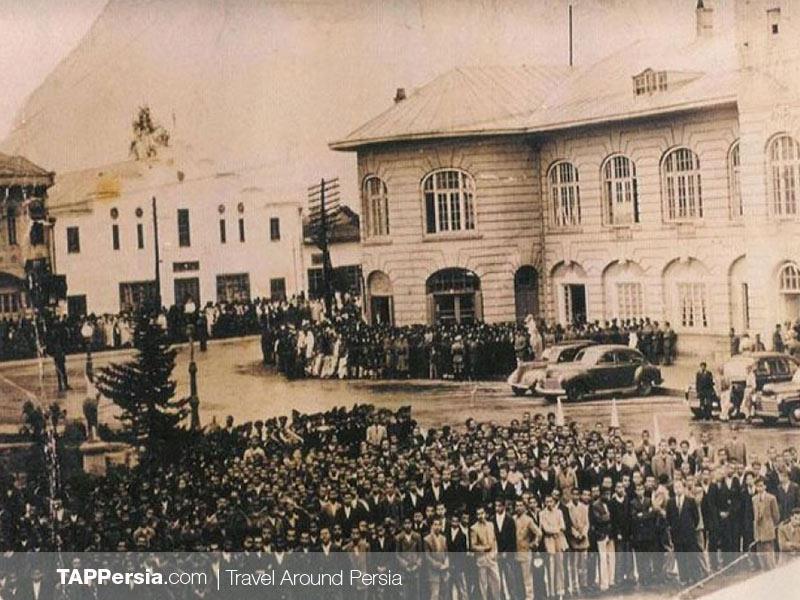 If we travel further into the past, the area was a hill where people had buried a holy person. They called him Abu Ja’far Master who turned most of the local people to Islam. They made A cemetery around his tomb. But before they start building the Shahrdari building they had to destroy it. But his grave is still there. While digging for the building they dug some potteries that belong to the Timurid Empire which means this place’s history returns to a long time ago.

The address is Iran, Gilan Province, Rasht, Shahrdari Square. You can get to Square easily by a taxi almost from every spot in the city. Anyways you need to walk a bit because the taxi drops you off a few hundred meters away from the square. No vehicles, remember? 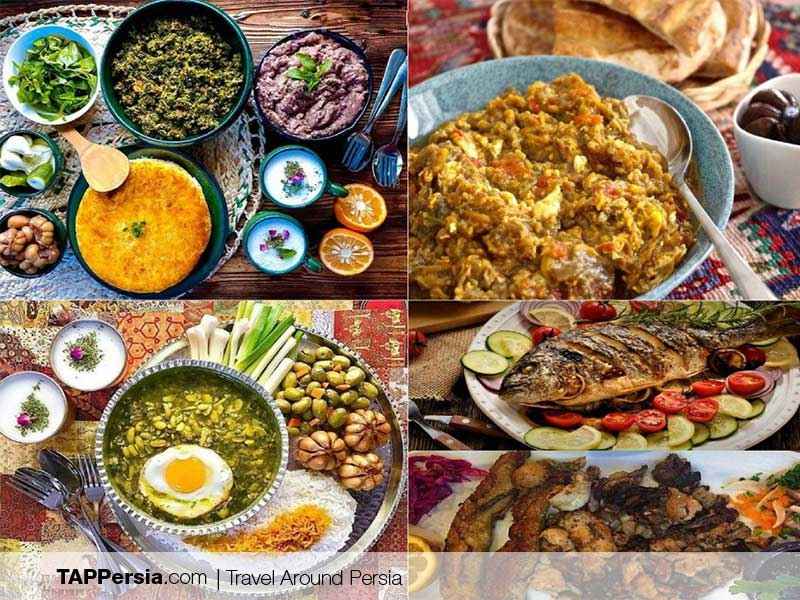 The spot is great for shooting, thus don’t forget to capture the beautiful memories in the frames of your cameras. There is also a lot of delicious street food to grab such as Baghali, Fouman cookies, traditional hand-made bread, and bakeries. Other than that Rasht is one of UNESCO’s creative cities in gastronomy and has many delicious local foods that you should try.

The Square Plaza is next to the Rasht Grand Bazaar, don’t forget to visit it also. You will find it quite exciting, colorful, and full of flavors. In addition, you can learn a lot about Gilak people, their food, and their lifestyle by walking around.