Goharshad Mosque is one of the marvelous architectures left behind by the Timurid Kings (1370–1507). It is one of the most popular mosques in Iran, and one of the top attractions in Mashhad (the capital city of Khorasan-Razavi). Qoharshad is the oldest mosque in Mashhad. Its mesmerizing beauty has made it one of the top cultural, historical, and religious attractions. Apart from religious aspects that draw many people to the mosque, Goharshad Mosque is a huge example of the finest arts in architecture, tile work, and calligraphy. 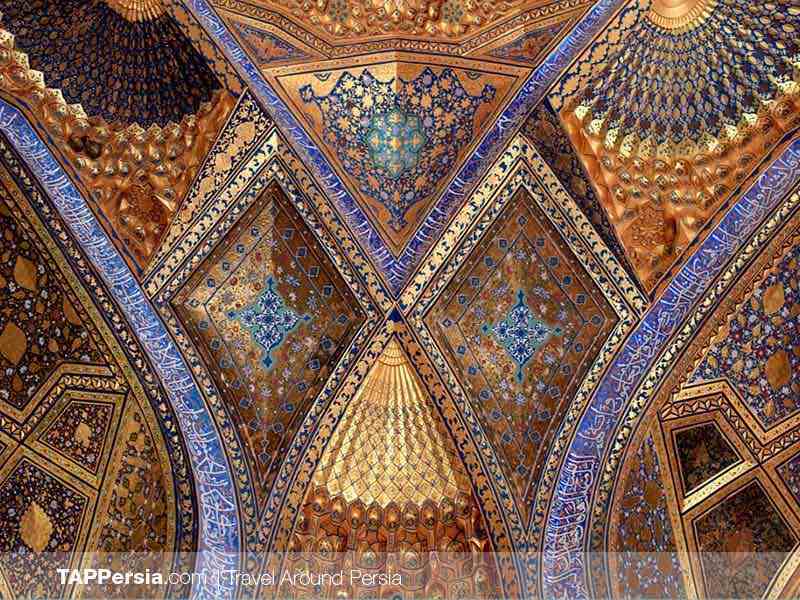 The art, architecture, being a place for religious people to gather, are not the only things about this mosque that make it outstanding. But a historical disaster has a bond to this place. And that’s what adds to its credibility among people. The protest of Mashhad’s people against Reza Shah, during the Pahlavi Dynasty, is Goharshad Mosque Event. Protesters gathered in this mosque but unfortunately, the government Terrorized them all. 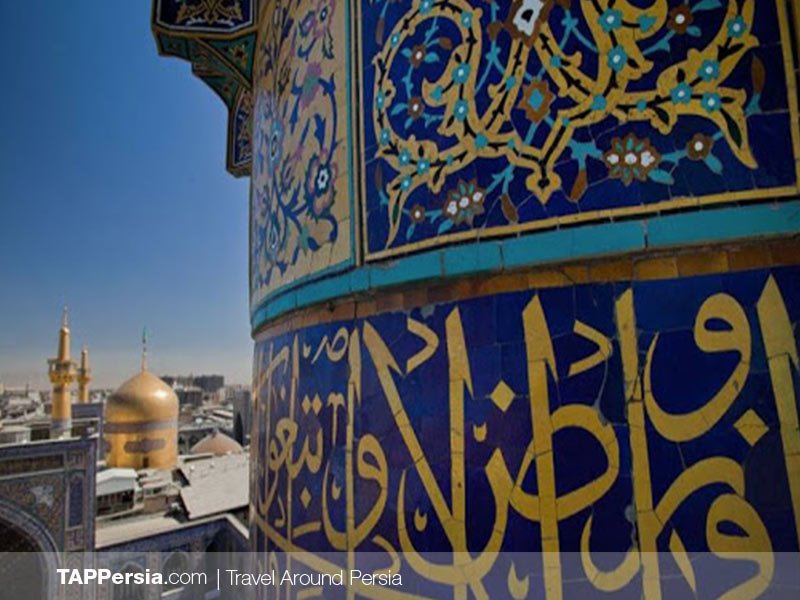 Empress Goharshad, the wife of Shahrokh Timurid, ordered to build the mosque in 1418 CE. Ghavameddin Shirazi was the architect in charge. The Goharshad Mosque is located on the south side of the Imam Reza shrine. Goharshad was one of the known women in the Timurid Dynasty who was killed in Herat. Following her murder, they named the mosque after her.

Although the current dome has been reconstructed with concrete with the former circumference, it has been repaired twice before. Once in the Safavid era and again during Qajar’s era. Russian forces bombarded the shrine in 1330 AH, consequently, it damaged the main dome of the mosque. And they repaired it in 1339 AH. 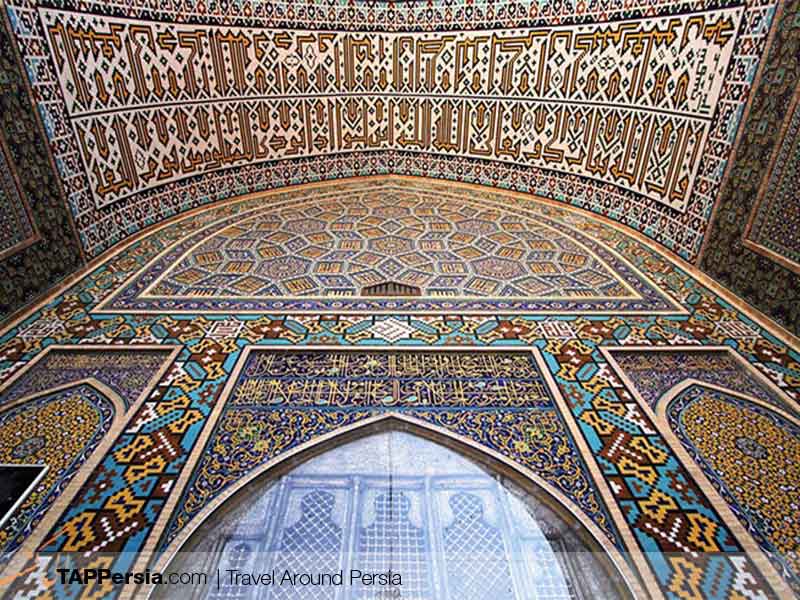 Goharshad Mosque is one of the most visited mosques each day, not only because of its awesome art but because of its location, in Imam Reza Shrine outlining. The name of Goharshad is written by tiles in two spots. The first is on top of the silver door opening to the “Dâr-alsiyâdeh” portico Leading to Imam Reza Shrine. The other on the Maghsure Iwân’s inscription. 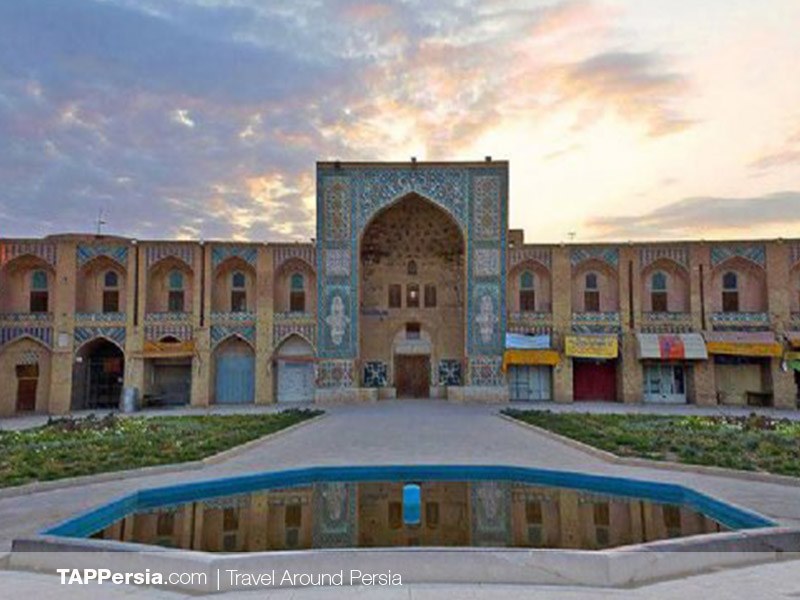 There is a cute story about the pool in Qoharshad Mosque. They say years ago when Goharshad decides to build this mosque, she starts buying all the private owners’ properties on the desired piece of land. Among all, there was an old woman who they could not convince to sell her cottage. However, they started building the mosque. After some time she accepted to sell but under one condition; that they name part of the mosque after her. Goharshad agreed. Now there is a pool exactly where her cottage was and the pool’s name is “Old Woman’s Mosque”.

The Architecture Of Goharshad Mosque 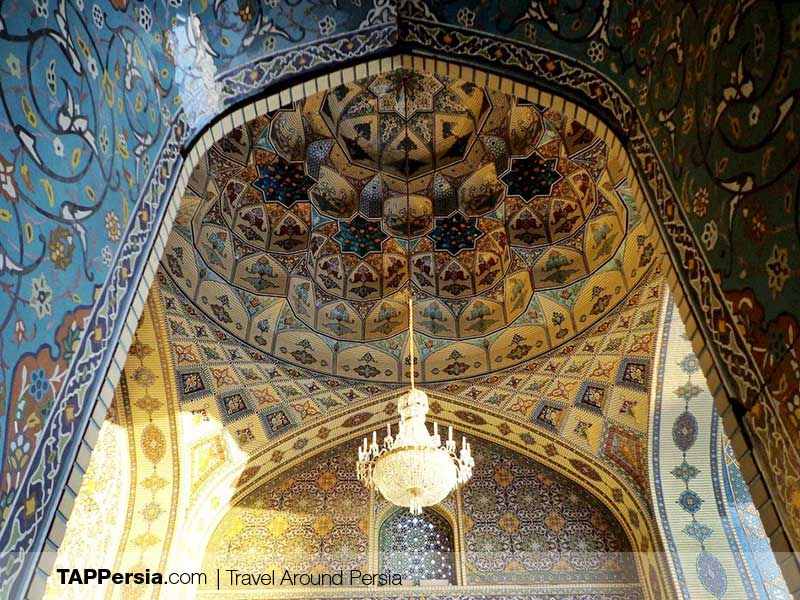 The delicate and marvelous tile work and the remarkable engineering make Goharshad Mosque a masterpiece. The strong building of the mosque has a classic design, with a large courtyard in the center and four Iwâns or porticos. The mosque has two doors, an entrance door, and an exit. unconsciously you will stand in awe by seeing the beautiful inscriptions in Thuluth script (the work of Shahrokh’s son) on the walls.  The most important section of this mosque is its southern portico, Maghsure Iwân, which receives the highest praise for the arches and valuable inscriptions.

The arches and minarets show off original Iranian art. Mosaic was one of the popular arts of the Timurid era which you can see everywhere you look. 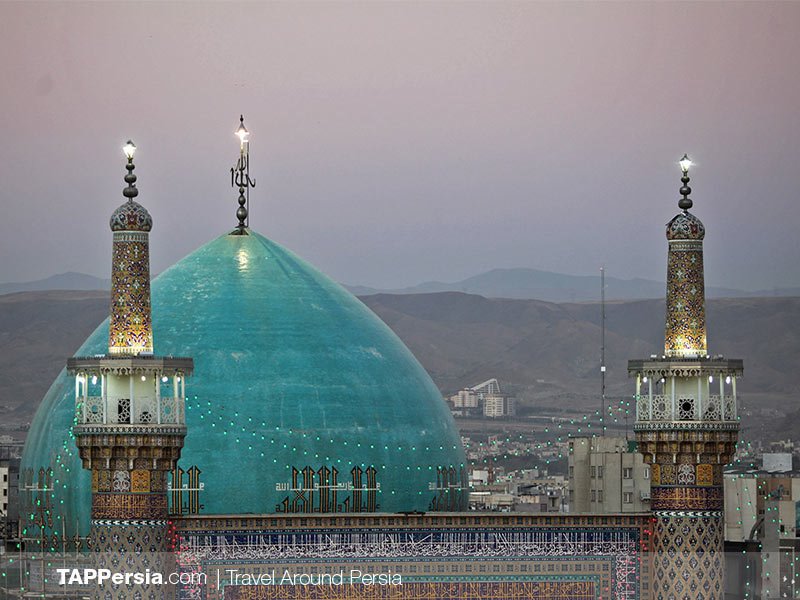 Goharshad Mosque’s dome is forty-one meters tall. The outer surface of the dome is made up of glazed bricks and inscriptions in the Kufic language. The eye-catching big blue dome is located above the Maghsure Iwân. It has two minarets on the sides. The minarets are attached to the sides of Maghsure Iwân and go up high to forty-three meters. There are inscriptions on them, too. 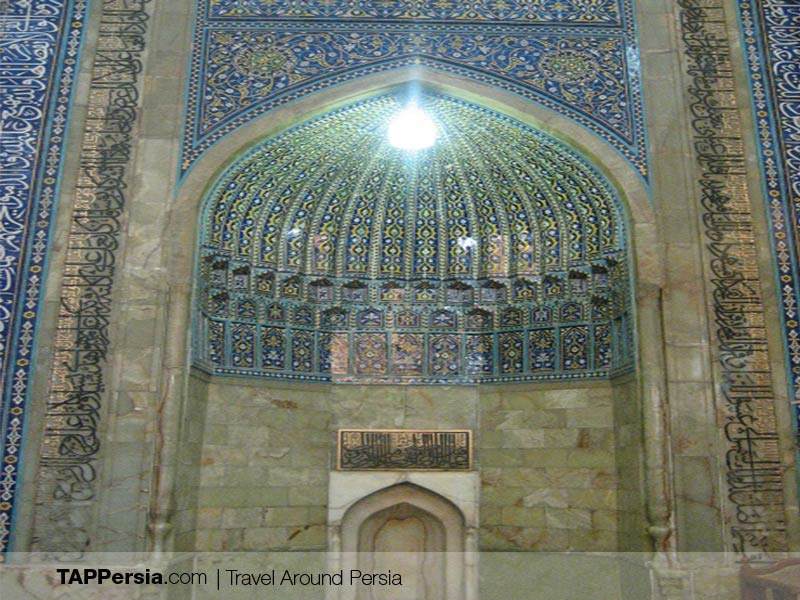 One of the most important parts to visit is the marble sanctuary. It has elegant carvings and inscriptions around it. The sanctuary is located at the end of Maghsure Iwân. For sure it is a unique presentation of Iranian art during the Timurid era. 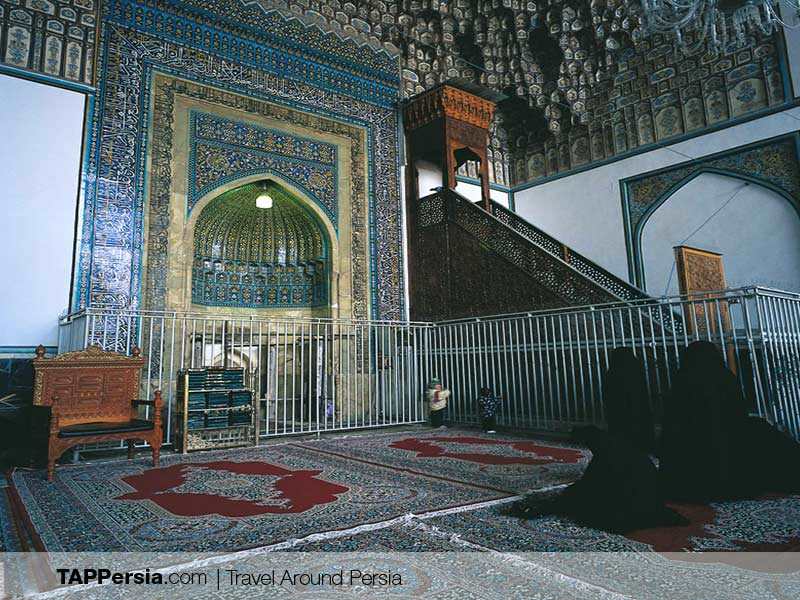 On the right side of the sanctuary, there is a Minbar or pulpit. It is a long, delicately carved wooden Minbar. No iron nails have been used in it which is one of its stunning aspects that any artist and expert appreciates. Anyway, he has made it out of walnut and pear wood. This great work belongs to artisan Mohammad Khorasani who lived during the Qajar dynasty.

They call it Sahib-al-zaman, the 12th hidden Imam’s Minbar. It’s all because of some specific features and the long years it has continued standing out. They say he will sit there on Judgement day. 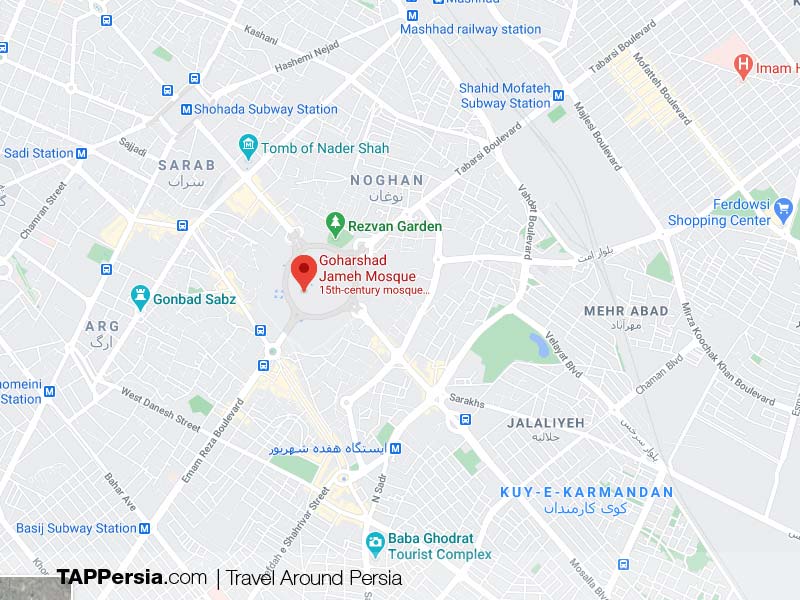 Iran, Khorasan-Razavi, Mashhad, Imam Reza Shrine. You can get to Goharshad Mosque by Imam Reza Blvd which is the fastest route. 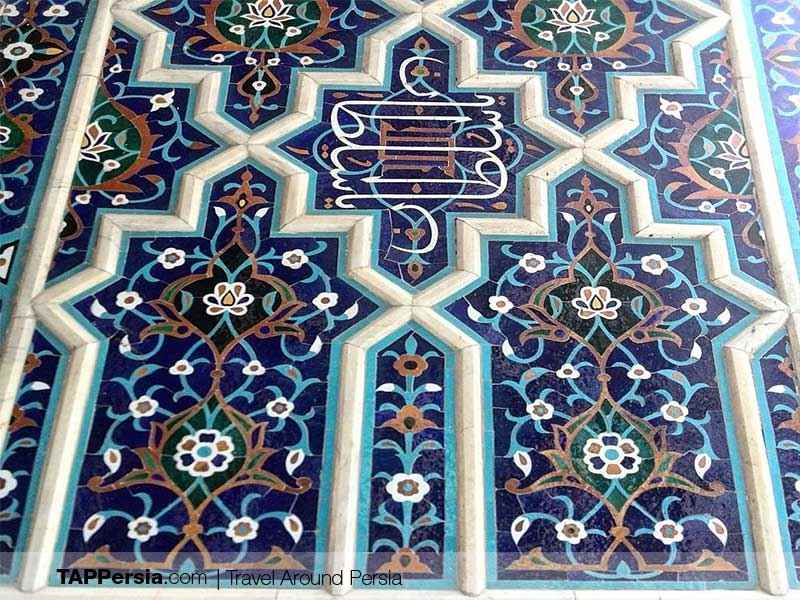 The shrine is open 24/7, so is Goharshad Mosque. As a result, you can visit anytime you want. But remember they might not let you in alone if you are not a Muslim. They might send you in with a guide. Have in mind during the holidays the shrine is unbelievably crowded, so is the mosque. If you like it crowded that’s your time, if not pick weekdays.

If you are looking for other attractions near the shrine do not forget to visit Darougheh Historical House. It is only a few blocks from the holy shrine. Darougheh House is an old Iranian-Russian house that worth visiting and taking great photos of.