You might be wondering about the social taboos and prohibiting laws in Iran since you are about to visit a Muslim country where observing some ethical standards is a must. One of the very basic questions tourists visiting Iran typically ask is whether they are allowed to drink alcohol in Iran or not.

Shortly, alcohol is legally banned in Iran. Meaning that it is not allowed to produce or sell alcohol here. As a result, you will not find any liquid store, nightclub, or bar. But this is not where it ends. Consuming alcohol is more complicated than the mentioned sentences. Keep on reading to understand how the real process is.

The Law of Alcohol in Iran

As it was mentioned before, the law is totally against producing, selling, having, and consuming alcohol in Iran. Accordingly, if you get cut while drinking or carrying alcohol, you will be faced with punishments like lashes, paying fines, or even jail. Not to mention that there is NO “Drinking Age” in Iran; so, no matter how old you are you will be arrested in case of being caught in any above-mentioned scenarios.

Can I Bring Alcohol to Iran?

Note that it is even illegal to bring alcohol to Iran for your personal usage. Due to the fact that the luggage is checked with X-ray at the airports, it is a safer choice not to bring any alcohol with you. 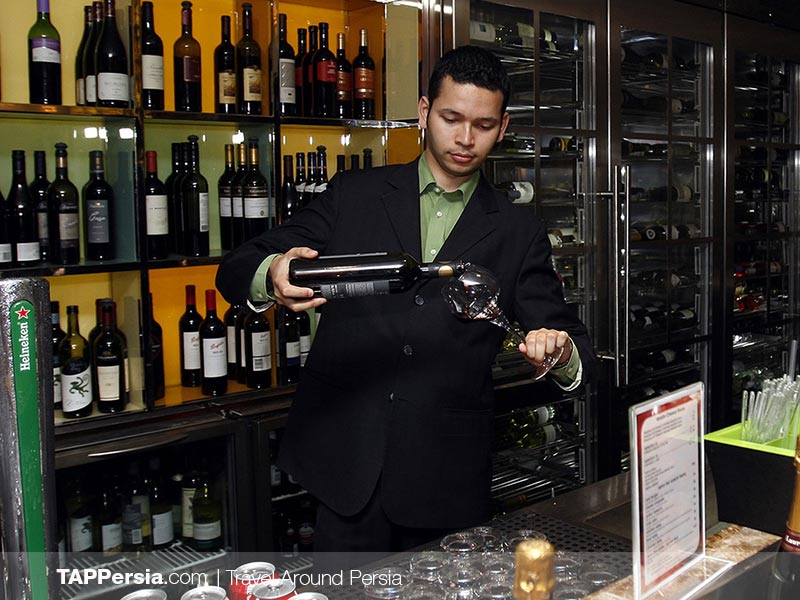 Is Alcohol Prohibited for Tourists and non-Muslims?

Bear in mind that the law of prohibiting alcohol in Iran is general; whether you are an Iranian, a tourist, or a non-Muslim. So in case you are a tourist, the bad news is that it does not make any changes.

Are Ethnic Minorities in Iran Banned from Drinking Alcohol?

Armenians, Zoroastrians, and Jews are the chief ethnic minorities in Iran. Unlike Muslims, ethnic minorities have limited permission to distill, brew, and drink in private places like their home. But even among them, trading liquor is banned. They can only brew alcohol for their own use. Truth be told, it is not that you cannot find any ethnic minority selling wine or beer, but not buying from them is a safer choice.

Is There any Way to Evade the Law?

It is good to know that, it is not that no Iranian drink alcohol. There are parties at which alcohol is served. First things first, local people know how to disobey the law and yet not get caught. Besides, it is not worth all the stress and troubles if you are not so familiar with the culture and do not know trusty locals.

Despite all the laws prohibiting alcohol in Iran, it is not that strange to be offered with some alcohol since people are aware of foreigners drinking alcohol on almost a routine basis. Well, the truth is there are some illegal sources producing alcohol in Iran. Especially some local people produce it in their home. There are mainly home-made and a few of them are contraband. So, no wonder if you are offered some famous beer and wine brands!

We suggest you avoid such drinks as much as possible because of two reasons. First of all, for the factory-made drinks, it would be hard to discriminate between original and fake ones unless you are a professional drinker. Besides, for the home-made drinks, the risks of getting poisoned are so high since being even a bit careless during the brewing process, it can cause huge health issues. Some of these products contain methanol and isopropanol that can bring about serious problems like drowsiness, nausea, vomiting, and permanent blindness.

What about Hotels Serving Drinks?

You might have heard that it is legal to serve alcohol for tourists in the hotels. That is just a promising myth and the truth is far behind that. There have been times that a few hotels were or are serving alcohol but the moment the government found about it, they were sealed for at least a couple of months. So no raising hope for this case!

Despite all the alcohol you might miss visiting Iran, you have a wide range of options to pick from during your journey in Iran. You can either brew them yourself or have them at cafes and traditional restaurants.

Chai (tea): The original Persian Tea or as it is called in Persian, Chai, is one of the things you must try. It is the national drink and on average, people drink tea two times a day. Having a cup of tea during your visit to traditional Persian houses and beautiful mountains can be quite an experience. The north of Iran has famous teas where you must try and even buy for your loved ones. It definitely makes a perfect souvenir. You can find tea almost everywhere. It is good to know that there are also traditional tea houses that serve different types of tea. 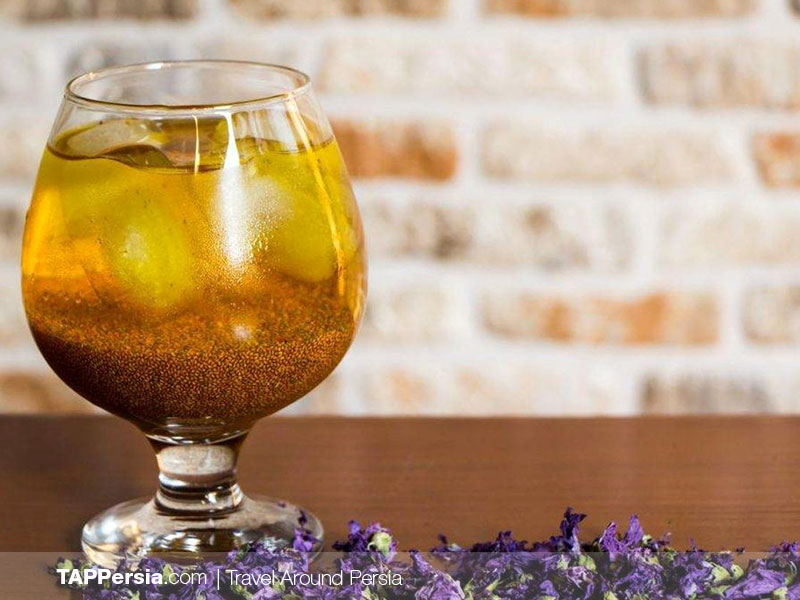 Sharbat: It is one of the main kinds of cold beverages that people usually drink during summer. Based on your taste and body, there are various types of Sharbat with delicious flavors. Sekanjebin, Khakshir, Saffron (“Zaferan” in Persian), Gol Mohammadi (= rose water), Bahar Naranj (= bitter orange), Khakshir, and Bidmeshk are some of innumerable delicious Persian Sharbats. Our suggestion to you is a yummy Khakshir during the hot summers. 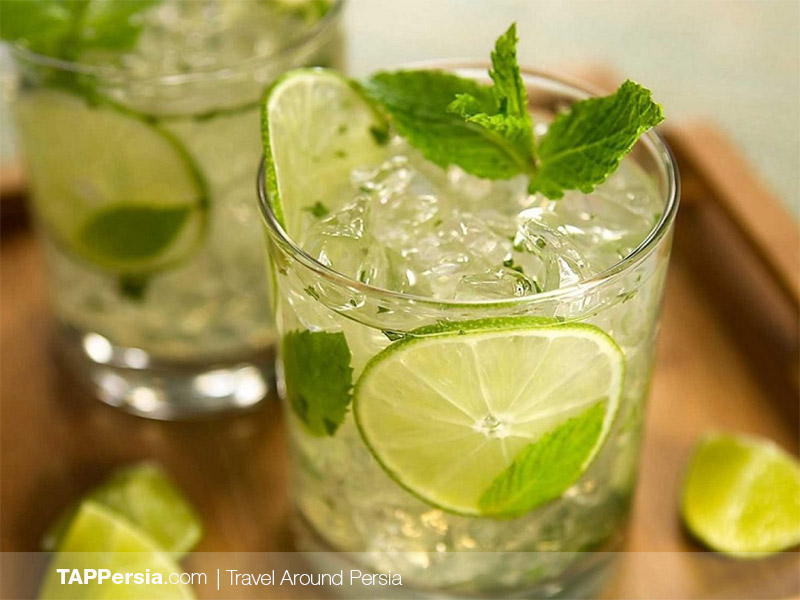 Damnoosh (Herbal Drinks): Iranians brew various kinds of herbs as a hot beverage called Damnoosh. It is used typically in winters and at nights. In Iran, Damnoshes have so many medical benefits for people depending on their health problems and their temper, they can choose various types of Damnoosh. Bahar Narnej, Baboune, Behlimoo, Gole Gav Zaboon, and Ostokhodus are only a few of Damnoosh you can find in Iran. If you are so stressed, why not try a cup of Gole Gav Zabun before sleeping?

Dough: Doogh mainly consists of yogurt, cold water, and herbs like mint. The dough is typically served with the dish at lunch or dinner especially with Kebab and Dizi. It has a sour taste and it makes you sleepy like alcohol. As a result, if you need to do something carefully or you need to stay up late, we recommend not drinking Dough before such occasions.

So, Why Visiting Iran?

Hearing about these prohibitions, policies, and ethical codes you might be wondering whether you should visit Iran at all or not. We highly suggest you visit Iran. If you are too worried about these rules you can consult some tourists who have visited Iran to see whether they were bothered by these restrictions or not.

Above that, isn’t traveling about experiencing a new culture, lifestyle, and most importantly their rules? Isn’t it about living for a few days like a total local to taste and feel how people might be living life all around the world? Trust me, it totally is worth it and you will see life will not be that hard and unbearable with these few restrictions. Instead, there are innumerable authentic locals, magnificent traditions, tasty foods, delicious herbal drinks, mesmerizing landscapes, and striking adventures awaiting you in Iran. It is able to get an Iran visa in less than three days with 20 euros and, you will be so busy with events and adventures in Iran that you barely think of drinking alcohol.

Do not forget to tell us about your concerns and experience in the comments below. We would be pleased to hear your ideas and questions.