Being Vegetarian in Iran

If you are a vegetarian and planning to visit Iran, the food might be one of your biggest concerns. Finding prepared food for a vegetarian in Iran can be not very easy but it’s possible.

Many people have the idea that Iranian food is all about meat and Kebabs. It is true that locals love meat and that most restaurants do not serve vegetarian food, but there are plenty of vegetarian dishes in Iranian cuisine. Usually, though, they are mostly served at Iranian homes. However, in big cities such as Tehran and Isfahan, vegetarian restaurants are starting to open. Cafes are found in all cities and they always have something to offer as a veggie dish. Even in traditional restaurants, you might be able to find some mouthwatering veggie options. 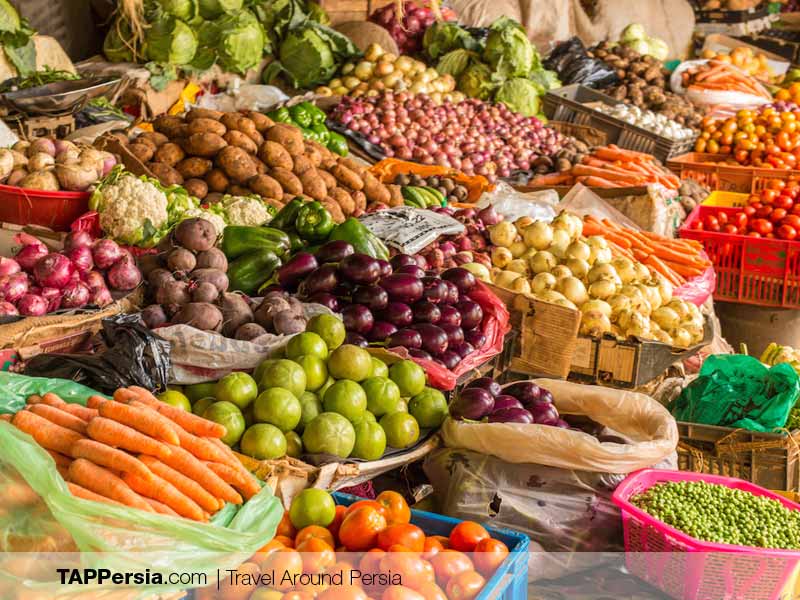 As mentioned there are some backgrounds that we can say Iran is a vegan-friendly country and as a vegan in Iran, you have many options. Iranian farmers produce fresh seasonal fruits and vegetables. You see their produce stands on the ways and sometimes it’s not a shop. Farmers bring their products on their own and sell them for a cheaper price from the back of a truck or anywhere on the streets.

Iranians are used to have a big plate of sliced fruit as their snacks in the morning and afternoon. Mothers make it for their kids and ask them frequently to eat due to its health benefits. Also when there’s a ceremony in Iran fruits are an integral part. For special Iranian occasions and celebrations, it’s the same.

Vegetables, herbs, and even some fruits play an outstanding role in most Iranian recipes. They also put bowls of raw herbs and salad next to the main dish.

Street Snacks for Vegetarians in Iran 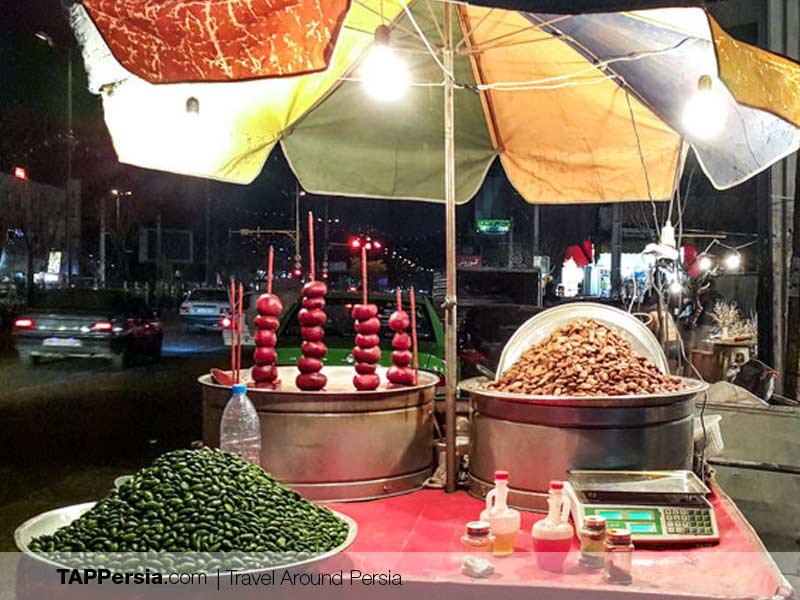 Let’s know about some of the street snacks which meet the expectations of a vegetarian in Iran. Some of them are available regarding the season. Steamed beets and fava beans are sold in autumns or winters. Greengage, spring almond and blackberries can be easily found in springs. Grilled corn and fresh walnuts marinated in salt come to streets in summers. Furthermore, there are some street snacks you can always find:

Fruit Rolls: Lavashak is the Persian term for fruit leather. They cook different fruits, make a puree and flat it over a sheet until dries. You might have seen it in other countries too, but try Lavashak in Iran as it’s traditionally made.

Dairy products: Iranians love their yogurts, cheeses, butter, whey (Kashk), and etc. They are extremely easy to find in any bazaar, shop or supermarket.

Faloodeh: In fact, it’s iced noodles, generally made of rice noodles (starch), lemon juice, sugar, and rose water. Faloodeh is usually served with syrup or ice cream. It’s considered a famous desert all over Iran, however, Shiraz is famous for its Faloodeh.

Juices and Ice Cream: There are cafeterias very common in most streets of Iran. They serve fresh juices of different fruits. Moreover, you can try the traditional ice cream (made with saffron), and other kinds of ice cream there.

Mugs of Mexican corn have become a popular street snack. It mostly made of cooked corn, butter, mushroom, cheese, and mayonnaise.

Dried Nuts: Dried nuts are called Ajeel in Persian. They are easily available anywhere including almonds, pistachio, walnuts, raisins, and etc. Recently, different kinds of fruit are dried in slices.

Grilled Mushrooms and popcorns are sold in some streets as well.

Street Food for Vegetarians in Iran

Here are some street dishes that suit a vegetarian in Iran and you can conveniently find them anywhere.

Falafel and Veggie Pizza are popular, especially for Iran vegetarians. Samosa is the same, just make sure there’s no meat inside and it’s only potato type.

Rice, also called Polo or Dam-Pokht, can be served in many different varieties. The most readily available home options are Adas Polo (rice with lentils and raisins), Dampokht-e Baghala (rice with broad beans and dill), Havij Polo (rice with carrots and walnut) and Dampokht-e Gojeh (rice with tomato). Also, Tahchin is Persian baked rice that’s a mixture with egg and saffron. Tahchin is normally cooked with a layer of shred chicken in the middle, but you can make it without that and it’s still delicious. 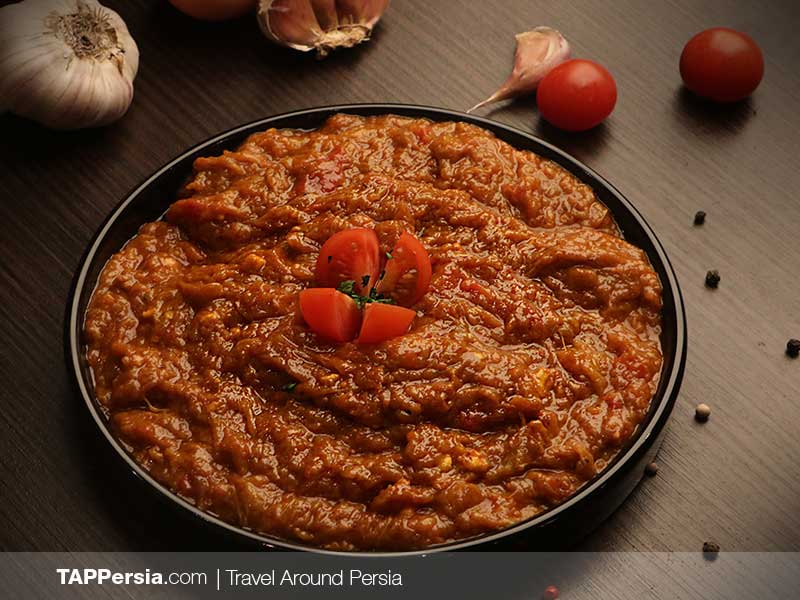 Aubergine (Eggplant): Probably the most common vegetarian dish you can find in restaurants contain aubergine or eggplant. They are served with different sauces such as yogurt sauce or tomato sauce along with copious herbs. The most common eggplant dishes include Kashk-e Bademjan (aubergine with whey, herbs, and spices) and Mirza ghasemi (aubergine with tomato, garlic, and herbs).

Omelet/ Eggs: Kuku is a type of egg dish similar to an Italian frittata or Omelette. There are lots of different varieties, some of which are cooked with different vegetables such as spinach, green beans, potatoes, and mixed herbs.

Ash is a dish similar to a stew or a thick soup. The most popular and well-known Ash is called Ash-e Reshteh (It’s also considered a street food). Ash-e-Reshteh mostly consists of legumes, herbs, noodles, and topped with whey/kashk sauce. However, there are many varieties of Āsh and every region has its own traditional Āsh. Some of them are Āsh-e-Gandom (a combination of legumes with wheat and herbs), Āsh-e-Doogh (Yogurt based Ash)

Kaleh joosh is a simple type of vegetarian soup originally from the desert regions of Iran. It is enriched with calcium and protein and the main ingredients for this soup are walnut and Kashk (whey). 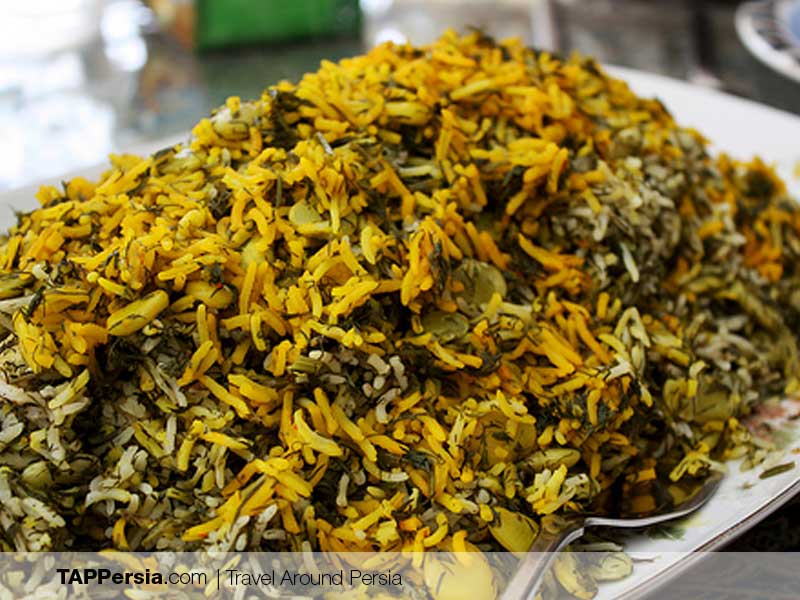 Baghala ghatogh or baghali ghatogh is northern Iranian specialty made with fava beans, dill, and eggs. It’s usually served with Persian rice in northern provinces such as Gilan and Mazandaran and can be considered a stew. It is spiced with turmeric, salt, garlic, and sometimes pepper.

Yatimcheh is a vegetable dish similar to ratatouille, is usually made of eggplant, potatoes, and tomatoes and served with a bowl of vinaigrette, a mixture of vinegar, chopped white onion, and dried mint. Every city has its own recipe, in Shiraz, for example, they use zucchini instead of eggplant and some people make it with potatoes or beans and lentils

Dolma or dolmeh is a family of stuffed vegetable dishes very popular in Middle Eastern and Mediterranean cuisine. In Persian cuisine stuffed grape leaves are the most popular, usually, they are stuffed with ground beef and rice but they can also be served without meat, making the dish a very delicious vegetarian alternative. Just make sure to ask the waiter to leave the meat out of the dolmeh! Dolmeh can also be made with other vegetables such as squash, peppers, aubergine, and tomatoes and filled with rice, spices and other vegetables or meat.

Pinto beans are called ‘Luobia’ in Persian. They cook beans with tomato paste, oil, and spices. This finger-licking food is the favorite one for many, even non vegetarians in Iran.

Adas literally means lentil in Persian. It can be simply a complete dish, called ‘Adasi’ and very easy to cook. Iranians usually have Adasi for breakfast.

Side Dishes for Iran Vegetarians

Salads and Pickled Vegetables: you can find them served as a starter in most cafes, restaurants and in every local market. There are different salad types including modern and traditional ones. Popular modern ones are green salad, Greek salad, and caesar salad (ask it without chicken). Salad Shirazi is a very famous traditional salad in Iran. It’s very healthy and suitable for a vegetarian in Iran. It consists of chopped tomato, onion, cucumber, verjuice, and mint powder. Try this delicious salad and you’ll make it at home often.

Another typical side dish in Iran are pickled vegetables. They marinate different veggies including cauliflower, eggplant, onions, garlic, carrots, chilies, onions, etc in vinegar. Some pickles are very sour or spicy, so you better taste a little in advance. 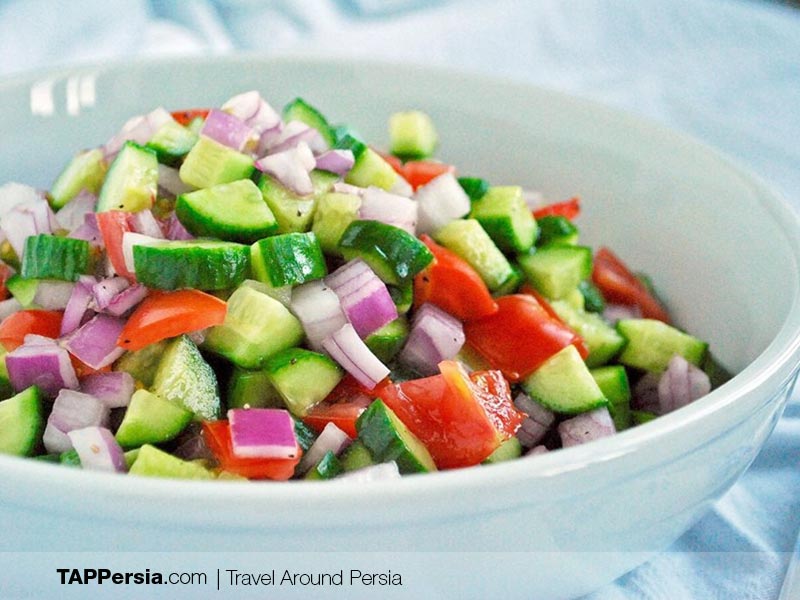 Traditionally marinated olives called Zeytun Parvardeh in Persian. It’s originally from the north of Iran, but can recently be found all over Iran. They keep olives in lemon juice, pomegranate paste, ground walnuts, garlic, mint powder, thyme, and other sprinkles. 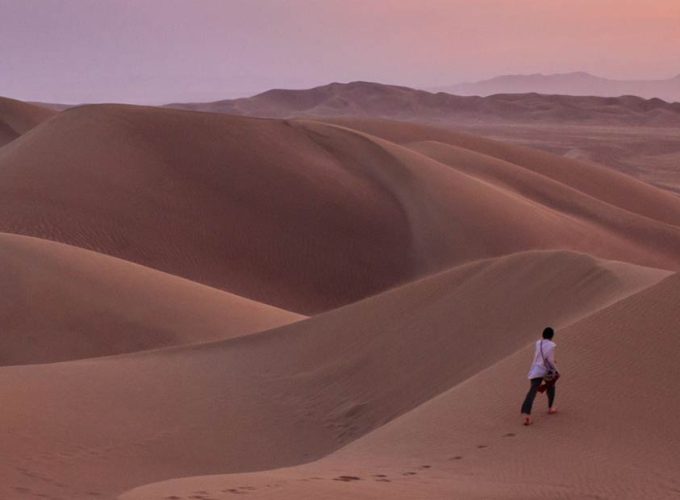