Persian dishes are famous for their unique and pleasant taste; Ghormeh Sabzi, Gheimeh, Dizi, and Kebabs are the famous ones. Rice plays an important role in most Persian dishes. Let’s get familiar with a rice base Persian food called Tahchin. Layers of sprinkled rice are mixed with yogurt and egg and will make anyone’s mouth watering. They put tender chicken pieces between the layers, and this is how Tahchin originally is, however, if you’re a vegetarian, you can make it without any meat or chicken and it’s still finger-licking.

Tahchin is like a rice cake in a buttery drizzled pan and cooked in the oven. When it’s ready, they invert it on a platter with a crunchy, golden brown top. Generally in Persian, they call the lowest crispy layer of the pot Tahdig. It’s famous among families that kids fight to take a larger amount of Tahdig as it’s very delicious.

Trying Tahchin once and smelling its aroma, you’ll cook it so many times and it’ll be one of your home main dishes. Even if you forget, your family will ask you about it as the taste is unforgettable. Just follow the recipe to have a crunchy golden Tahdig over Tahchin every time. Baking Tahchin is so easy and doesn’t need much effort. At the same time, it’s a classy food which can decorate the table with its beautiful color and cake shape. Tahchin recipe can have small changes due to different tastes; Like they add fried eggplants, or instead of chicken pieces, they put lamb and black-eyed beans in the layers. 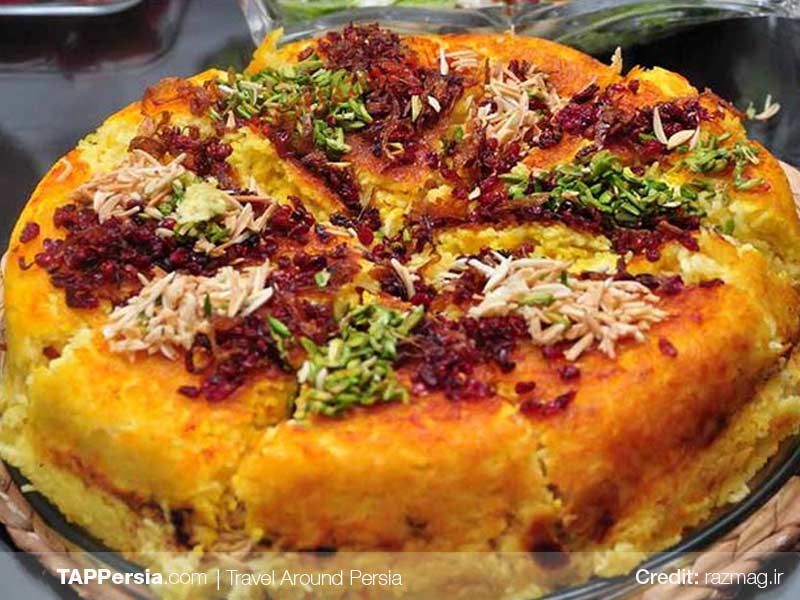 As mentioned there are Tahchin recipes with different ingredients. However, the general recipe is the same, here’s the recipe for Tahchin with chicken, called Tahchin-e Morgh.

Two and a half cups of rice

One teaspoon of Persian rice spices

Half a teaspoon salt

An oven-proof baking dish or pan 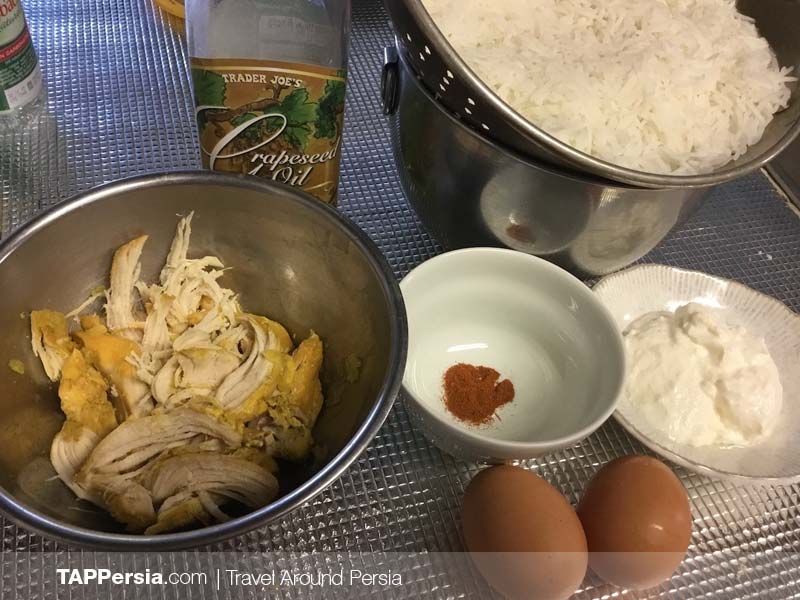 How to Make Tahchin

There are some variations when it comes to making Tahchin. The following recipe is Tabrizi way to cook it, in which there are four layers. Unlike other variations, only the bottom layer is mixed with yogurt and saffron, while in other variations, all the rice layers are mixed yogurt ingredients.

It is advisable to use chicken with bones and especially chicken thighs, drumsticks as bones give it a very rich taste.

There are four layers in this variation. The topmost consists of rice with different spices and butter melted on the top to make it more rich and flavourful. The second consists of soft chicken pieces and its broth. The next layer is again of rice with Persian spices. The last layer contains rice, spices, yogurt, egg and saffron which usually sticks together like a pancake.

How to Cook Chicken for Tahchin

Take skinless chicken pieces in a stockpot. Add 2 cups water, salt, pepper & chopped onion. Boil the water and then reduce the flame to medium low and cover it partially. Then cook it for one and a half hours or until chicken meat breaks easily.  Keep the broth.

Next, After cooling the chicken, separate the meat from the bones. Try to have large chunks of meat. We will need one cup of broth to be used later. So if the broth is more than a cup,  boil it until it’s around one cup.

Then, keep the broth aside and the chicken. Mix the broth and meat again. Refrigerate for about 45 minutes. We need the broth to have a thick texture. Set it aside.

How to Cook Rice for Tahchin

First, wash the rice in a colander, then soak it in a bowl containing water and salt for some hours. Rinse the rice in the colander, so the starch will be removed. Set this aside. Put a pot of water over the heat and wait till it’s boiling. Add salt and mix it with boiling water. Then add rice and cook it partially until it’s a little soft. You can check one rice with your hand. The rice shouldn’t be mashed or completely cooked as we will cook it again with chicken. Rinse the partially cooked rice and let them cool down. Set the rice aside.

Meanwhile, preheat your oven to arrive about 200° C. Take a medium bowl, add an egg, four tablespoons of yogurt, one tablespoon of vegetable oil and a bit of saffron. Mix them well and make it smooth. Then take two cups of partially cook rice and mix the rice until the rice are mixed. 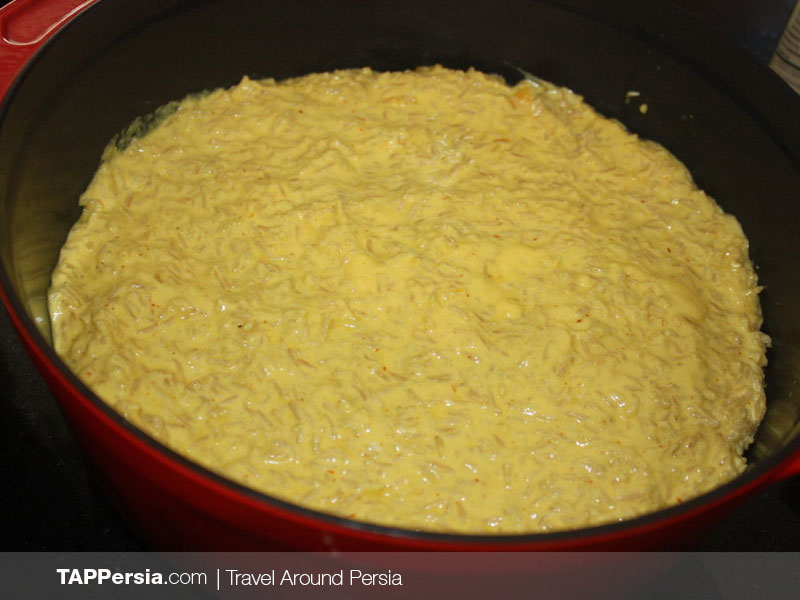 How to Set Layers

Take a baking dish, pour about three tablespoons of butter and three tablespoons of vegetable oil. Insert this dish in the preheated oven until all the butter melts down and starts to sizzle (Should take a couple of minutes). Take out the dish by taking the necessary precautions, and set layers as following:

The bottom layer will have some rice mixed with yogurt, egg and vegetable oil. The second level has half remained partially cooked rice with half a teaspoon of Persian rice spices. In the third layer, use the chicken pieces and broth to evenly cover the rice which we cooled before.

The last and the topmost layer will have the remaining partially cooked rice. Cover it evenly can add half a teaspoon of Persian rice spices. You can use your hand gently squeeze the rice to make the top layer smooth and equal. Add a little butter and 3-4 spoons of water on top of the last layer with some distance to each other.

Bake it at 200 degree centigrade for about one hour 15 minutes. Check to see if the last layer of the dish is golden brown. This is the indicator that the Tachin is ready. If the last layer hasn’t been golden brown, bake more. However, do not overdo the baking as the taste will change.

Once ready, remove the Aluminium foil and take it out in one piece in a large dish or plate. Separate Tahchin from the baking dish and invert it on the large dish. Leave it in the dish for 7-10 minutes so it sticks together and does not break. Decorate Tahchin with barberry, slivered almonds or pistachios, and parsley. Cut the baked rice into pieces like a cake and enjoy the taste along with yogurt, herbs and salads. 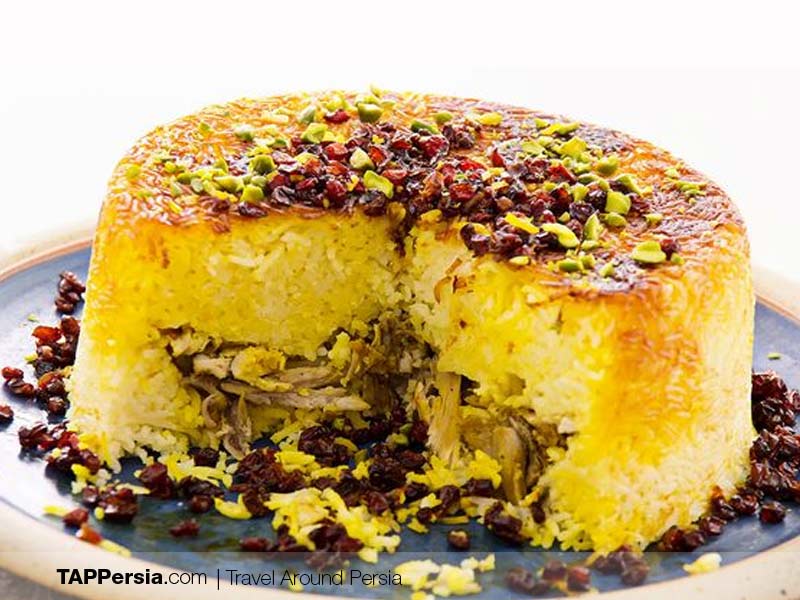 This is a less common Tahchin type than Tahchin-e Morgh, however very delicious as well. Mahicheh refers to lamb shanks used instead of chicken. The reason this Persian dish will melt in your mouth is that the lamb shank will be cooked in little water for a couple of hours. What makes it even more popular is the black-eyed peas.

One cup of black-eyed beans

One cup of yogurt

Rinse the black-eyed beans and put them aside. Pour a little vegetable oil in a pan, add chopped onion, turmeric, salt, pepper, and then tomato paste. Give it a quick stir and then add the lamb shanks. Pour some water over and cook the mixture finely. Let it cool, then debone and shred it. Keep the broth as much as one cup and set it aside.

In another pan, fry one chopped onion to a golden brown with little turmeric and pepper. Next, add the black-eyed beans and half of the broth. Stir for some time until the beans are tender and firm.

Meanwhile, cook the rice the same as explained in Tahchin-e Morgh. Mix half of the rice with yogurt, egg, vegetable oil and saffron. Make the baking dish greased with a little butter and oil. Set layers exactly like Tahchin-e Morgh. The only difference: You need to mix the rest rice with the fried onion and black-eyed beans. Moreover, instead of the third layer (chicken in the previous recipe), put the lamb mixture.

Pour few spoons of broth and little butter on the top rice layer. Like the above recipe for Tahchin-e Morgh, bake it in the oven. And serve it the way mentioned. This Persian dish has an unforgettable taste, especially with Salad Shirazi. 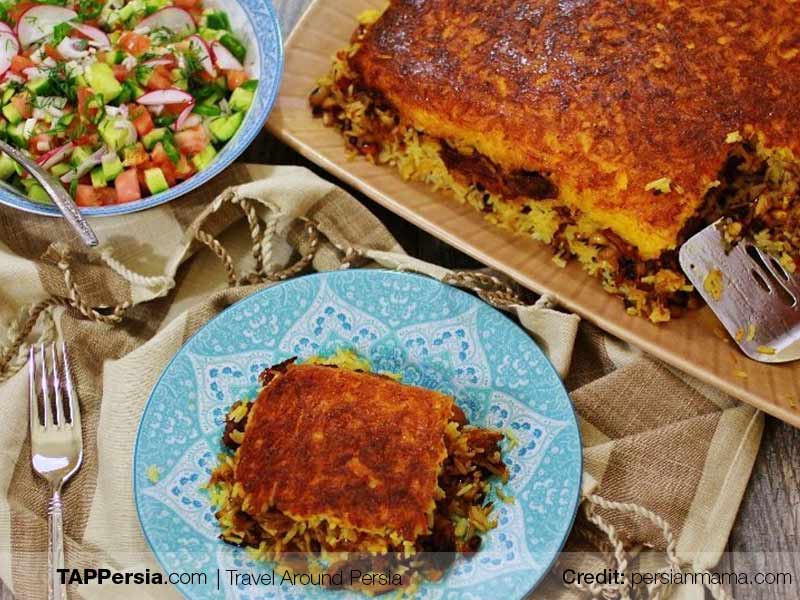