As a woman and as smoker, one of the first things that concerned me before coming to Iran was if I would be allowed to smoke here. Don’t worry, yes you can smoke in Iran but not everywhere and as freely as we are used to in Europe. This means it will be good both for your health and for your wallet. Like in Europe, smoking in indoor public places is forbidden. In 2007, the Iranian Parliament approved a law which prohibited smoking in all indoor public places, including restaurants, coffee shops, hotels, public transportation stations, and government buildings. 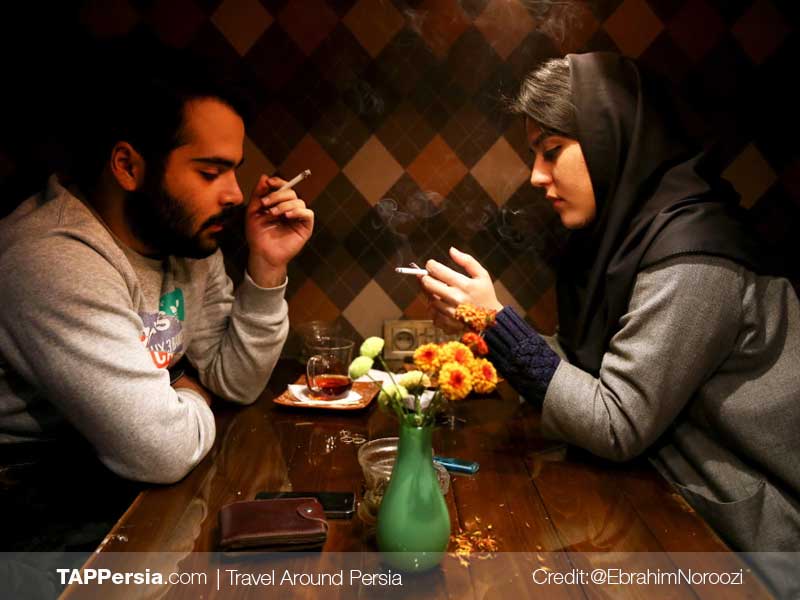 Because of this you will not see many people smoking in public in Iran, unlike in other countries of the Middle East. The few people that smoke in public are mostly men, although I have seen some young girls smoking in their cars or in the streets in North Tehran. If you don’t want to attract any unwanted attention, try not to smoke in the streets. It is okay to smoke in some cafes and restaurants that offer designated smoking areas and is completely fine in your hotel common area.

If you are really craving a cigarette, try to smoke in a hidden place, where there are not many people, especially kids, around. Use your common sense, if you are in a more conservative city like Isfahan or Yazd, try to avoid smoking in public and wait until you are in your hotel or accommodation, or a designated smoking area. Do not smoke in the proximity of Mosques, holy places, governments buildings or schools. Do what locals do: If you see a local girl lighting a cigarette in a public places and no one paying too much attention, then you will be fine.

Cigarettes in Iran are extremely cheap compared to Europe: A pack of local cigarette cost less than an euro, and in big cities such as Tehran and Isfahan, you will also be able to find tobacco, papers and filters for those who like to roll their own cigarettes.

An alternative to cigarettes can be the hookah or qalyan, a water pipe used for smoking tobacco. Smoking water-pipes is an age-old tradition with roots in Iran and India and is becoming very popular especially among young people.

Qalyan is still very much a part of popular culture in Iran, you can smoke it at working-class tea houses and at traditional restaurants where it is served to your table or rug with dates, sweets and of course tea. Tea houses often serve as centers of social interaction, places where people meet up and spend their time together, some tea houses are for men only so check that before you enter one! There are many traditional tea houses in all cities of Iran where you can try the Qalyan in all sort of flavours and you will see many Iranian(smoking in Iran), especially young men, bringing their own in parks and during picnics.