Oct 27, 2022 0 comment
On the eastern side of Naqsh-e Jahan Square stands the Sheikh Lotfollah Mosque, the first of the square’s four monuments and an iconic example of architecture in Iran. The mosque is one of the most well-known tourist attractions in Isfahan thanks to its combination of simple design and lavish interior and exterior tile embellishments.
Table of Contents show

Isfahan, located on the slopes of the Zagros Mountains at 1600 meters above sea level, has continental weather. Isfahan experiences all four seasons, with scorching summer days and chilly winter nights. Isfahan restores its greenery in the spring, transforming into an earthly Eden with gentle winds that make you feel happy. Isfahan in the fall is very beautiful, especially in the city’s gardens and Nazhvan Forest Park.After Mashad and Tehran, Isfahan is the third-largest city in Iran. It has a population of approximately 2 million, the majority of whom speak Persian. In terms of tourist destinations and historical sites, this city is one of Iran’s main cities. Isfahan, the birthplace of history and culture, has seen several historic occurrences. It is situated close to massive steel plants and a number of industrial cities that are encircled by various mines.The Perso-Islamic architecture, great boulevards, covered bridges, palaces, tiled mosques, and minarets of Isfahan are world-famous. Isfahan is home to a large number of historical structures, monuments, artwork, and antiques. Because of Isfahan’s prominence, the Persian saying and pun “Esfahn nesf-e- jahn ast”—Isfahan is half the world—was created. We shall delve into the Sheikh Lotfollah Mosque, one of Isfahan’s beauties, in this post. 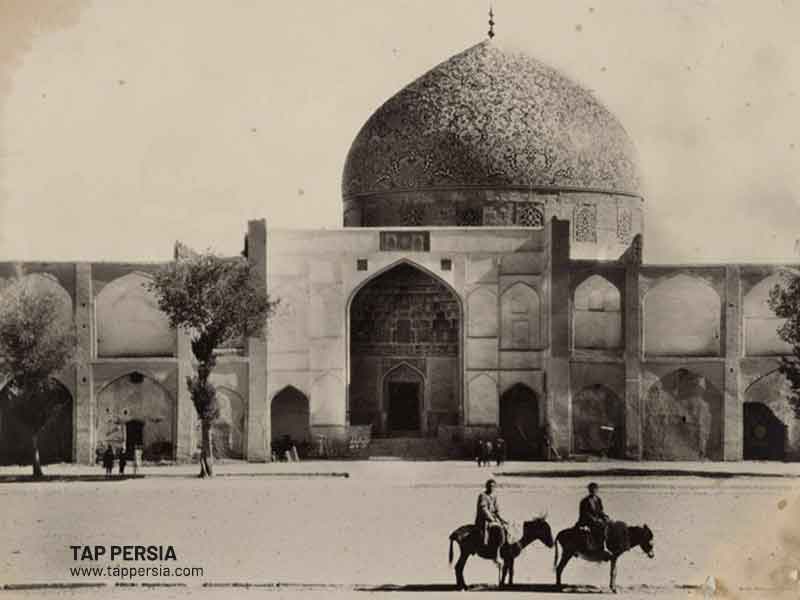 Shah Abbas built Sheikh Lotfollah as part of the Naqsh-e Jahan Square complex between 1603 and 1619. The complex needed a mosque that would be appropriate for the Shah to pray in and also blend with the grandeur and majesty of the region because the Shah and his family resided in Ali Qapu Palace on the west side of the plaza. The Shah Abbas dynasty’s family mosque was the Sheikh Lotfollah Mosque, in a contrast to the Imam Mosque, which was constructed for collective worship. Since the mosque’s doors were constantly locked and guarded, it took decades for regular people to be able to view it. Shah and his ladies utilized a tunnel under the plaza to pass from Ali Qapu Palace to the mosque without being noticed.

A Female Mosque, A Masculine Name

Shah Abbas’ main goal was to build a mosque for the royal women, especially his wife. The name of the mosque, Sheikh Lotfollah, is a masculine one. But why does a mosque for women have a masculine name? According to legend, Shah Abbas dedicated the mosque to his Muslim erudite father-in-law, Sheikh Lotfollah. This dedication would be given in honor of this esteemed Muslim scholar by the monarch.

In the sixteenth century, women had a rather high status in Safavid customs. In reality, women may hold powerful roles in politics. Safavid ladies took part in parades and public celebrations as well. Sometimes, the marriages they entered into were done so in order to forge alliances and collaborations or to deepen relations with national and local authorities. Unexpectedly, some women were able to transcend social norms and fill important leadership positions 400 years ago. Young female noblewomen also had access to education and training during that period.

The Architecture of Sheikh Lotfollah Mosque 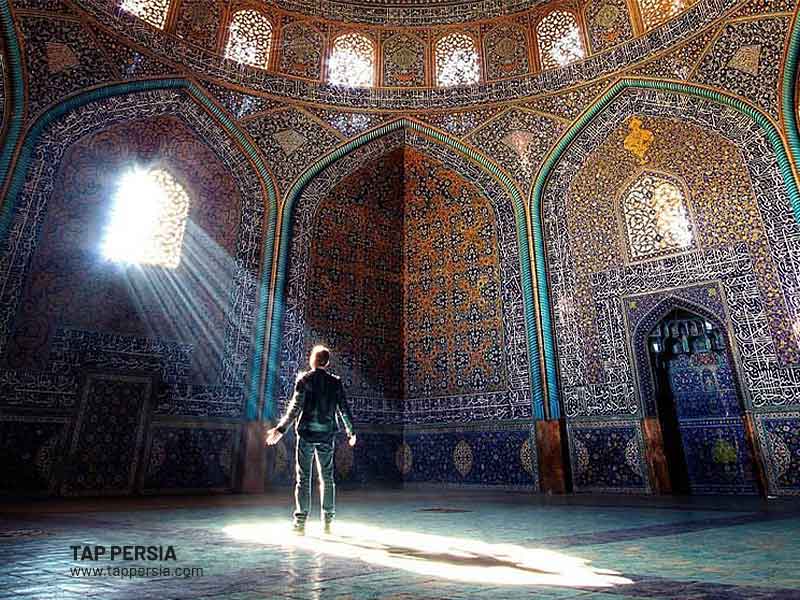 Sheikh Lotfollah’s mosque design is rather unusual from an architectural point of view, with a central courtyard and a spherical dome. These qualities are listed below:

Reza Abbasi, a well-known Iranian artist, designed the Sheikh Mosque interior tiles and murals, and their caliber and beauty are much beyond anything ever produced in Iran. The so-called seven-color tiles, calligraphy, and inscriptions are used to embellish the mosque’s walls, dome, and doors. 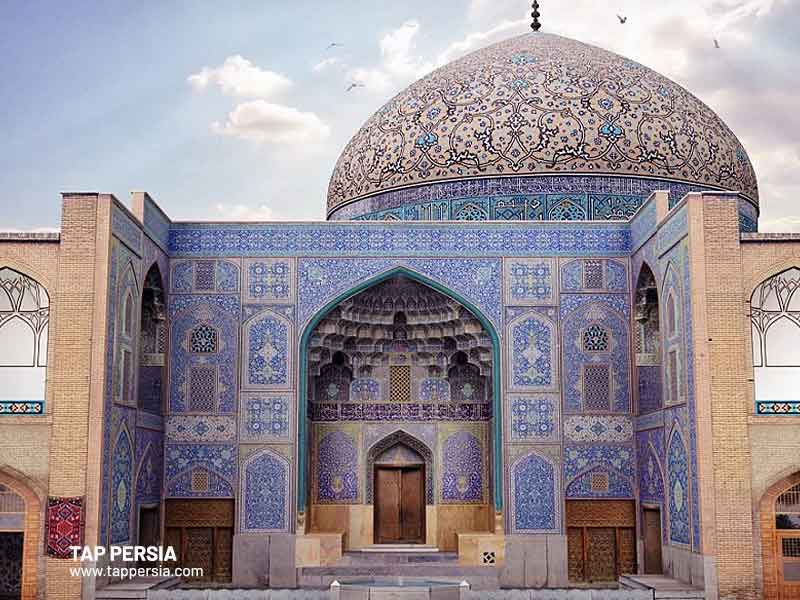 With a height of around 32 meters above ground, two shells connect the mosque’s majestic dome. Moreover, it has a 22-meter outer diameter and a 12-meter span. Additionally, it is smaller than other mosques’ domes. Additionally, it is probably more challenging to construct than traditional domes. In order to lessen the weight and pressure of the dome, the architect erected barriers next to it. Poetry, names of Imams, and Quranic passages are all masterfully written.

The Distinct Architecture of a Female Mosque

The Story of Missing Minarets 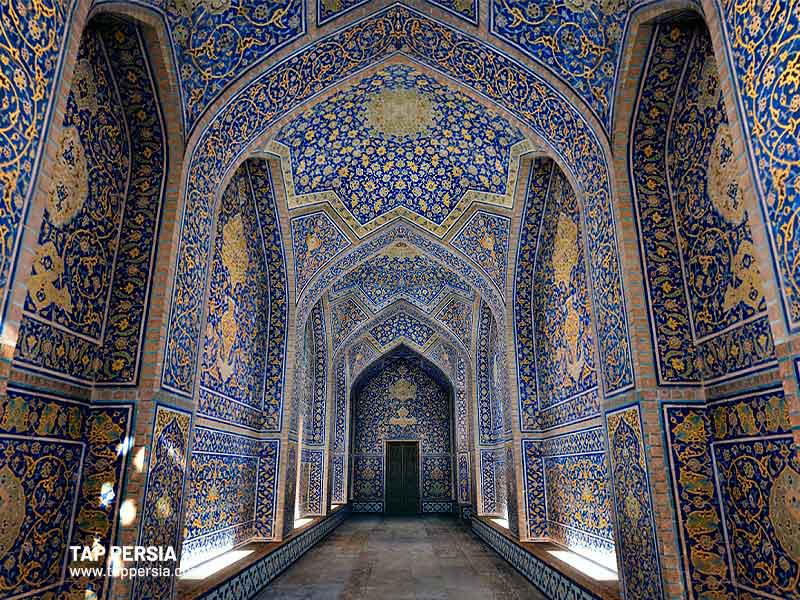 There was no public prayer in the Sheikh Lotfollah Mosque. Being a private mosque, it was exempt from all Islamic architectural requirements. Adhan, the person in charge of the call to prayer, would say it three times every day from minarets to make the prayer hour known to the populace. Minarets were therefore considered superfluous in a private mosques like Sheikh Lotfollah Mosque.

A Royal Link via an Underground Tunnel

Shah Abbas I, the Safavid ruler, ensured the utmost level of protection to keep the royal women safe as they traveled between the palace and the mosque. Under Ali Qapu Palace and Sheikh Lotfollah Mosque, he had a tunnel constructed. The bustling Naqshe Jahan Square, which was crowded with both domestic and foreign individuals, was therefore spared from having to be traversed by the royal women. The Safavid noblewomen were completely protected thanks to this safe attitude and the designated guards. 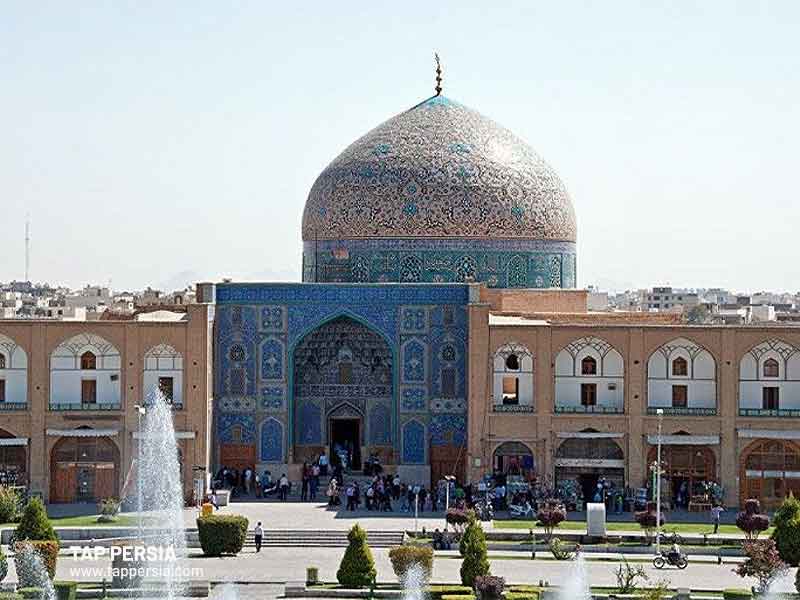 From the very beginning, the Sheikh Lotfollah Mosque astounds visitors with its brilliant architecture. Beautiful blue mosaics are tastefully used to decorate the Iwan entrance. Also, the doorway Iwan is surrounded by a number of magnificent ancient-style windows. The muqarnas patterns, which hang from the Iwan’s arch like stalactites, further add to the entry portal’s aesthetic appeal.

The Dark Hallways Leading to the Light

You see that the mosque is constructed on a raised platform as you ascend the main entry stairs. You will progressively descend into the darkness as you move along the tunnel that connects the entry portico and the opulent prayer chamber before the light shines upon you.

The Rare Peacock Dancing with the Light

Your adventure comes to an exciting, tranquil conclusion in a room that you can hardly leave. In the center of the room, beneath the dome, you can stand or even lie down. Assurance of fulfillment! With its blue lemon-shaped tail that bounces with the light, the peacock that is opulently decorated inside the dome will enchant you. Observe the peacock’s broad-spread tail as it sparkles in the midday sun to experience pure bliss. 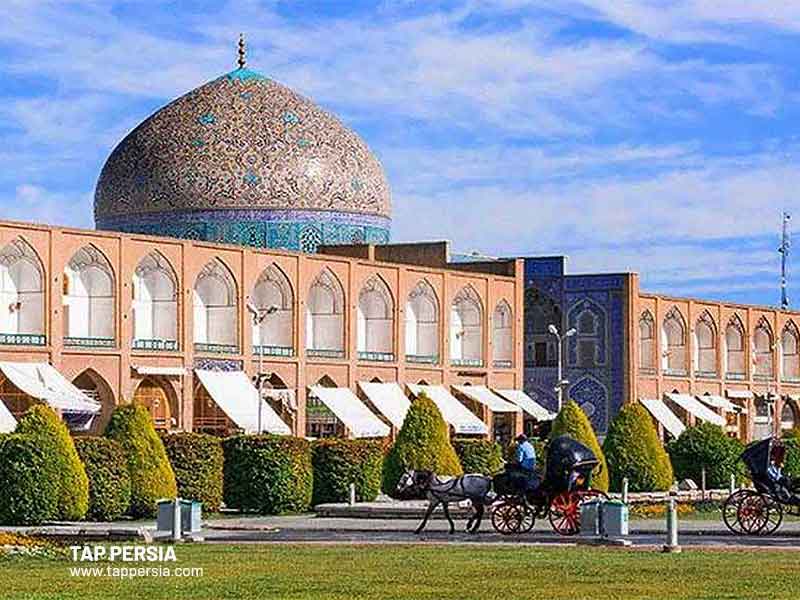 The Sheikh Lotfollah Mosque is situated in the eastern portion of Isfahan’s Naqsh-e Jahan Square, which is home to a number of other tourist destinations. The Imperial Bazaar, Isfahan’s primary bazaar, is accessible from the north end of the plaza via the Qeisarie Gate. There is a magnificent Shah Mosque on the square’s southern side. Nearby attractions include the Hasht Behesht Palace, Chehel Sotoon Palace, and the Shah Historical Bath. Walking for 20 minutes will get you to the Si-o-Se Bridge.

Where to Stay near Sheikh Lotfollah Mosque

Numerous alternatives are available if you want to stay close to the Sheikh Lotfollah Mosque. The one-star Partikan Hotel is presumably the nearest hotel to the mosque. The 3-star Part Hotel, Safavi Hotel, and the 2-star Pars Hotel are other affordable alternatives. For a more sumptuous stay, choose the 5-star Abbasi Hotel or the 4-star Pirouzi Hotel, two of Iran’s oldest hotels.

Where to Eat near Sheikh Lotfollah Mosque 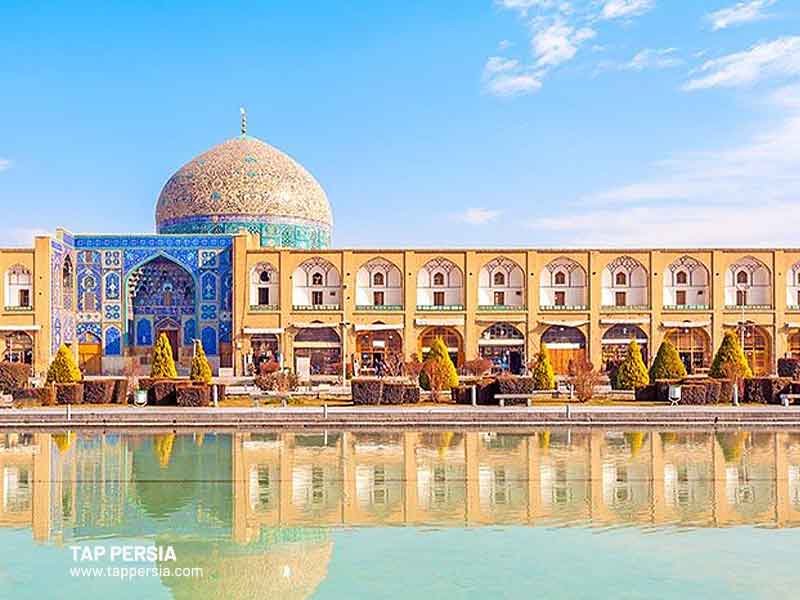 Naqsh-e Jahan Square, which is near to Sheikh Lotfollah Mosque, is home to all of the city’s top eateries. One of the nicest cafés in Isfahan is Azadegan, where you may sample authentic Persian food. In addition to its distinctive cuisine, the café has an intriguing design. Iranian cuisine, appetizers, and coffee with sweets are also available at Bastani Café, Roozegar Café, and Café 404.

When to Visit Sheikh Lotfollah Mosque

The mosque’s opening hours are determined by the times set aside for prayer. Therefore, the Sheikh Lotfollah Mosque is open from 9 am to 11 30 and from 13 am to 16 am in the winter and from 9 am to 12 30 and 14 am to 18 30 in the summer. Take a stroll across Naqsh-e Jahan Square after seeing the mosque. The sun setting in the evening is seen to be the ideal time to visit the area since it illuminates its domes.

How to Get to Sheikh Lotfollah Mosque? 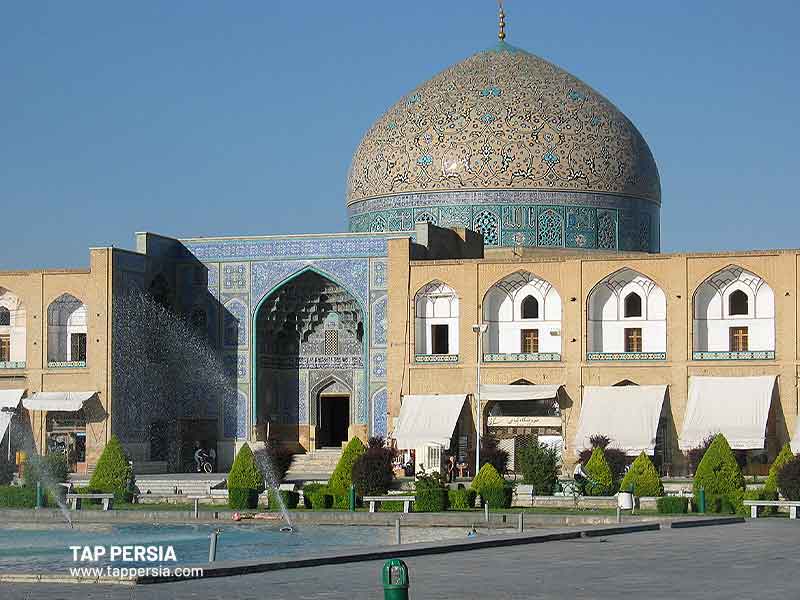 Utilize the Hasht Behesht of the Khorasgan Terminal and exit at the Imam Square Station to reach Naqsh-e Jahan Square. Buses are also accessible from the Ghadir Gardens of the East Terminal, or Imam Hussain Square.

The station that is closest to Imam Hossein Square is. The Naqsh-e Jahan Square is reachable via cab.

You will undoubtedly find information on Sheikh Lotfollah Mosque in every tourist book to Isfahan. Because of the fascinating history that informs its background and the magnificent aesthetic effort put into its construction, visiting this mosque is a unique experience. Therefore, by seeing this incredible work of art, you will accomplish two goals at once. There are some individuals who would not be astounded by such beauty and would forget the lovely shadow that resembled peacock feathers on the mosque’s top. This mosque is a notable jewel for Naqsh-e Jahan Square with its cream-colored dome, which is an uncommon hue among other mosques in Iran.

Why is the Sheikh Lotfollah mosque important?

The Sheikh Lotfollah mosque, one of the most significant architectural works constructed on Isfahan’s Square, is recognized for its location, size, structure, and ornamentation. It serves as the best representation of 17th-century Iranian tile workmanship and architecture.
Rate this post
iran top things to do Iran tours Iran Unesco Sites
Share