Rumi, the Teacher of Love

The story begins from Balkh in present Afghanistan. A middle-aged midwife was bringing jalāl ad dīn muhammad balkhi to this world but she didn’t know what an exceptional gift she was giving to humanity. As a child, Rumi or as Persians call him Mawlānā or Mawlawī was taught by his father, a highly respected scholar named, Baha al-din Walad. Baha al-din traveled a lot around the Islamic world and he even participated in Hajj or the pilgrimage to Mecca. 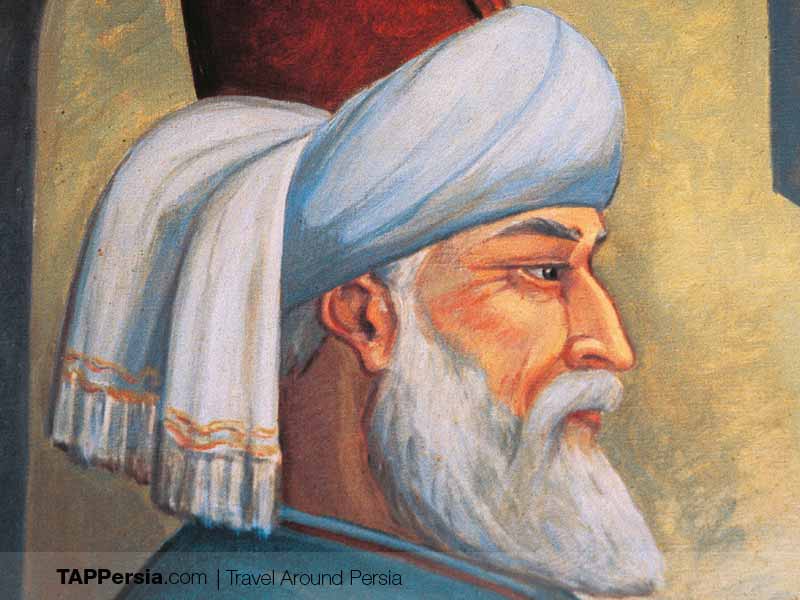 He was the teacher of Islamic doctrine, logic, the Quran and the Hadith (the recorded words and actions of Prophet Muhammad) and helped to make Konya a crucial learning center. He taught Rumi everything he knew, Rumi was his best student and he became a teacher himself, even more famous than his own father.

Another influence on him was Burhān al-Dīn Muḥaqqiq, Rumi’s father successor as the head of the madrasa in Konya. The first visionary and mystical experiences he met was under the influence of Burhān al-Dīn. He was the first person that introduced Rumi to Sufism (Islamic mysticism) and spiritual practices. The greatest influences on Rumi, however, were the Quran and Hadith.
What Country was Rumi from?
Rumi is so important that four modern countries claim him for their own. Afghanistan as he was born in Balkh and he gains his name “Balkhi” from, Uzbekistan as he lived in Samarkand as a child, Turkey as he lived, worked and died in the city of Konya, and Iran as his family was Persian and he wrote in the Persian language.

As Rumi himself illustrates in his poetry, he belongs to no country and no nation and his love is beyond religion and race. That is what makes Rumi the best selling poet in America. He is a great influence on so many celebrities like Bob Dylan and Madonna. You can find his poetry on mugs, phone accessories and even as tattoos. Some people even learn Persian only to be able to read Rumi’s poetry.

In the year 1244 Rumi’s life changed completely. He met a mysterious and charismatic figure, a mystical Sufi called Shams al din Mohammad or Shams Tabrizi. Shams means the Sun in Persian and he shined like his name on Rumi’s life and opened the gates of poetry. They were not living in this world anymore, there was a strong feeling between them, best described as “mystical love”. There are lots of stories and gossips in the modern world for this kind of relationship, but it is very hard to understand in the modern world, this idea of very close mystical companionship between two men. But the best explanation is that they were both chasing the truth together.

Who Was Shams Tabrizi?

Shams or Shams of Tabriz was a man of wisdom and knowledge but his heart, kindness, and spirituality were so magnificent that he lived like a wild dervish, meaning he had no desire for the physical world. This out-of-this-world Sufi introduced Rumi to Sama which is some kind of mystical experience, or dance in which you could feel or witness God or the unity among everything in existence.

The Fundamental teaching in this kind of Sufism was to purify yourself so that a divine reflection can be seen within yourself and realize the underline unity in the whole of existence. One of the most famous Sufi figures, Mansur Al-Hallaj once said “I’m the truth” or “I’m God” and was executed for this extreme statement. Rumi the most respected scholar of logic and structure was now amazed by Shams and the way he lived. This was an extremely dangerous path he was walking on. 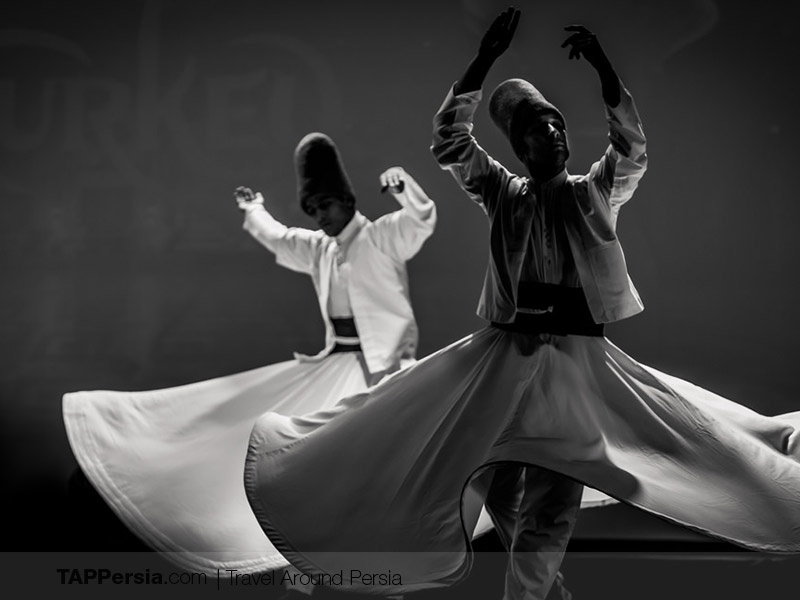 Their passionate mystical companionship made Rumi’s pupils jealous. They couldn’t tolerate the new way, their respected teacher wanted to live his life, and they blamed Shams for this misfortune. As a result, they forced Shams out of the town, Rumi started searching for him, found him and asked him to come back. They were once again together but their “Vesal” or togetherness didn’t last long and within a year Shams disappeared forever.

Shams had a huge impact on Rumi’s life, poetry, and perspective. You can see the obvious difference between his poems before and after Shams. He experiences “Feragh” or separation from love in this period and illustrates this state of human misery in the most exquisite way in Divan-e Shams Tabrizi

Masnavi-e Manavi (the spiritual Masnavi), also known as Masnavi of meaning is one of the most significant literary works in the world. The book consists of thousands of verses of poetry describing Islamic mythology and contains more than 200 interesting and educational stories. Masnavi is famous to be the Persian Quran, as Abd ar-Rahmān Jāmī, one of the greatest Persian poets says: “Although Rumi was not a prophet he had a book”. Rumi uses very simple and comprehensive language to explain complicated philosophical concepts like specific instructions in what should a dervish do, what is Sufism and what is life. He uses humans, animals, birds, and even flies as characters and you can see lots of Metaphors in each and every one of these stories.

Masnavi is an ocean of meaning and the reader gets drowned in this wonderful masterpiece like a fly in honey. Its short stories hook the reader like some of Dickens novels where he finishes chapters and comes back to the main topic again. 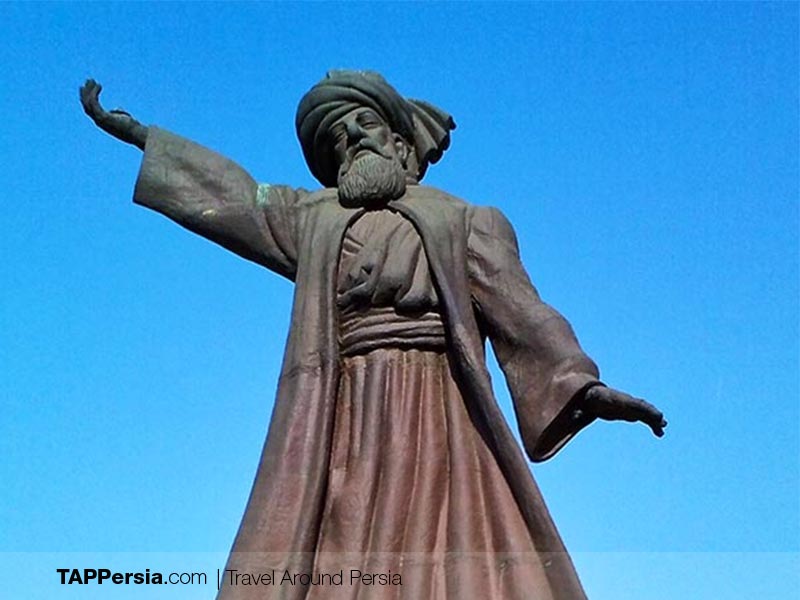 The beginning of Masnavi is called Neynameh (a letter from the straw) in which Rumi describes the whole book in 18 verses. Our main character in this part of the book is a straw taken away from its canebreak. This is a metaphor describing how humans are in “Feragh”, living away from their love, here on the earth and not with God in the heavens.

“We were once in heavens, we were friends with the angels
Let us all return there, that is our city”
This beautiful verse from Divan-e Shams is an echo of the Quran saying: we belong to God and to God, we are returning.

In contrast to Masnavi, Divan-e Shams Tabrizi is about Rumi’s personal experiences. It is about love, both for God and other human beings. It’s about his “Feragh” from Shams, and how devastated he became after his separation. In more than 40,000 verses, he describes every aspect of his life, his definition of love, the methods of Sufism and his philosophy.

“The result of my life is no more than three words: I was raw, I became cooked, I was burnt.”

These verses represent Rumi’s life before Shams Tabrizi as he was still raw and didn’t know enough about love, “Vesal”, the period in which they were searching the truth together and enjoyed their mystical companionship, therefore getting cooked, and “Feragh”, the separation from Shams that burned Rumi’s soul, made a great impact on him and his poetry and showed him another aspect of love.

“Dead was I then, I came to life, Whipping then, started to laugh
The kingdom of love arrived, I became the kingdom of perpetual love”

Jalal al din Rumi inserts his complex ideas into musical comets, shining upon our darkness and showing us the way. His mystical poems speak to us in a comprehensive simple method while his philosophy is complex and sophisticated. He believes that there is unity among everything in existence and “everyone is one”. Let us pick up one of his books and start reading as his magic cannot be explained in these few words.