Muharram – One of the Muslims Sacred Months

History, Story and Significance of Muharram

Muharram in Iran is known as one of the holiest months in the Islamic calendar. It also marks one of the biggest differences between Shia and Sunni Muslims. What has made this period of time special in Shia Muslim countries like Iran, is the mourning for Hussain ibn Ali (Imam Hussain), who is highly respected among Shia Muslims. Imam Hussain is highly regarded for his stand against Yazid, the caliph who ruled Muslim lands. Hussain, his family and followers (which consisted of 72 people) were deprived of water for more than three days, and were eventually killed or taken captive by the army of Yazid I at the Battle of Karbala.

In Iran, there are widespread mourning ceremonies for Imam Hussain during Muharram (July 30 – August 28, 2022) and Safar (August 29 – September 27, 2022) months. The majority of these ceremonies take place in the first 10 days of Muharram, with Tasu’a and Ashura (9th and 10th day of Muharram) being the key dates for these ceremonies. These ceremonies have been customized to match the cultural habits and traditions of different regions in Iran. As a result, many variations of Muharram mourning can be experienced in different villages and cities of Iran, and we are going to go through some of them in this article. 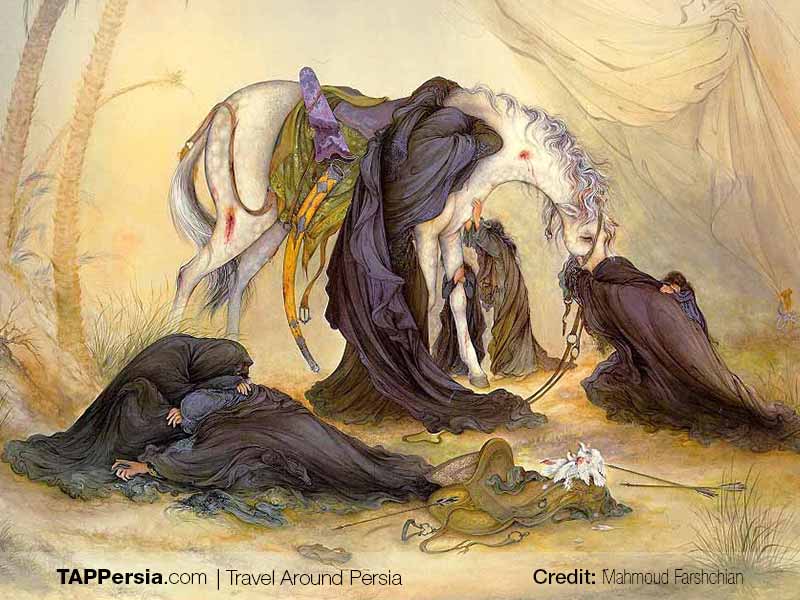 Death is usually symbolized by black, and so, it is customary to wear black throughout the whole day, as well as the whole month. One of the most common forms of public mourning involves a tradition known as Sine-Zani (Chest beating). The process involves a rhythmic and unified beating of the chest with the palm of the hand, in tune with percussion drums and vocal music, very similar to the Christian Gospel. This same process is also seen using a lashing tool with short metallic chains attached to a wooden handle, which is used to inflict more pain upon observant mourners, making them closer to Imam Hussain.

Muharram ceremonies in Yazd are famous for what is known as ‘Nakhl Gardani’. A huge wooden structure is carried around on the 10th day of Muharram (Ashura) as a symbol of carrying Imam Hussain’s coffin. The wooden structure (Nakhl) is decorated with fabrics, mirrors, swords, flags, and other religious symbols. The famous Nakhl that gets carried around in Amir-chakhmaq Square in Yazd on the day of Ashura is supported by hundreds of men.

The decorations surrounding each Nakhl is taken off after the ceremony and the wooden base can be found in its dedicated spot throughout the year until it gets used again the following year. Yazd is famous for the ‘Nakhl Gardani’, but it’s not the only place with this tradition. There are other desert cities and villages who follow the same tradition.

Another Muharram tradition which is mostly seen in Luristan province is ‘Gel Mali’. Pools of mud are prepared three days before Ashura (the 10th day), and men spread the mud on their heads and shoulders. Putting mud on the body is a sign of great disaster and can also be observed when loved ones have passed away. Some choose to have their entire body covered with mud, therefore the name of this process literally translates to ‘drop-in mud’. The mud is not washed from the body until the afternoon of Ashura. 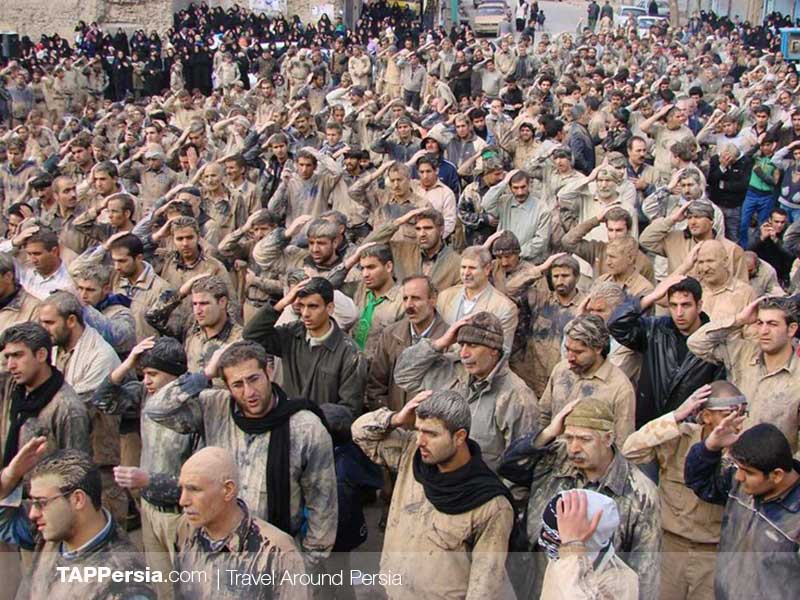 The act of turning around a torch in a circular pattern is known as “Mash’al Gardani”. This ritual can be usually observed among Arab ethnic groups, as well as cities like Qom, Shahr-e Rey, and Ardakan.

In the first day of Muharram, torches are set on fire and carried around by groups of mourners to announce the beginning of Muharram. The same ritual takes place on the 8th night of Muharram to show that the day of Ashura, the date Imam Hussain was martyred by his enemies, is close. In this ritual, groups of people holding and rotating the torches move around neighborhoods while religious music is being played.

Religious Acts of Muharram In Iran

During Muharram, Muslims do different things with different intentions. The Iranians wear black clothes in mourning ceremonies to show their sorrow and sadness. They mourn for Hussein ibn Ali and refrain from all joyous events. In addition, the commemoration of this brutal massacre begins on the first day of Muharram and continues for 40 days. During the first 10 days of Muharram, millions of Shi’a (and Sunni) Muslims remember the massacre in Karbala and strive to feel some of Hussein’s pain. Also, there is an important Ziyarat book, called Ziyarat Ashura about Hussein ibn Ali. It is popular to read this Ziyarat on the Day of Ashura and send salutations to Imam Hussein. Muharram observances are carried out in countries with a sizable Shia population every year.

Ashura and Tasoua(Muharram In Iran)

Day of Ashoura is the 10th day of Muharram which is the first month of Muslim lunar calendar. This day marks the martyrdom of Imam Hussain in 680 A.D. Imam Hussain, grandson of Prophet Muhammad, and his 72 companions which were killed in Karbala, so this day is the most tragic day for all Muslims. In Iran, Ashura, the commemoration of Imam Hussain has become a national holiday.

The second holiday on the 9th of Muharram is dedicated to the death of Hazrat-e Abolfazl, brother of Imam Husayn, who went to bring water for his family and the soldiers on the day of Tasoua but was killed brutally. 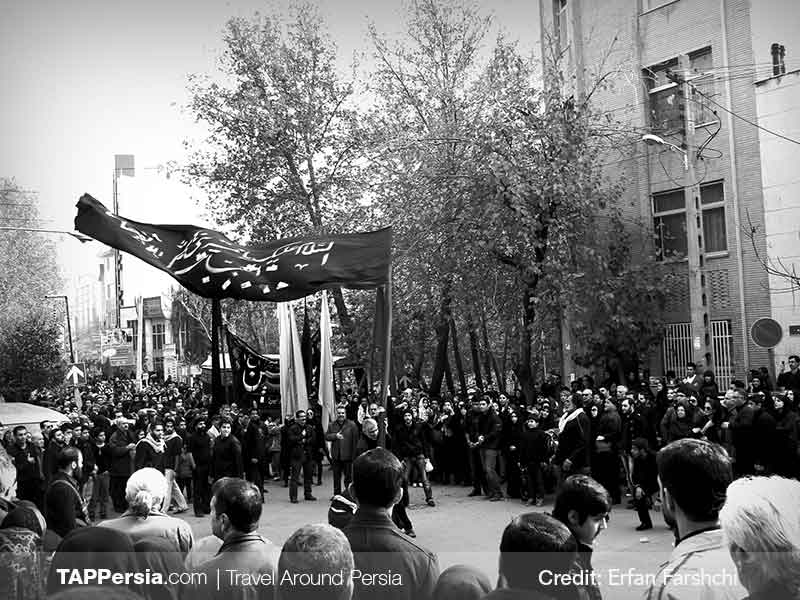 What is Ta’zieh? (Muharram rituals in Iran)

Ta’zieh refers to a condolence theater in which the epics about Ashura are conveyed through music and dramatic narration. This theatre is performed during the month of Muharram. It depicts all of the events of the days of Ashoura. It is originally performed outdoors in public places. 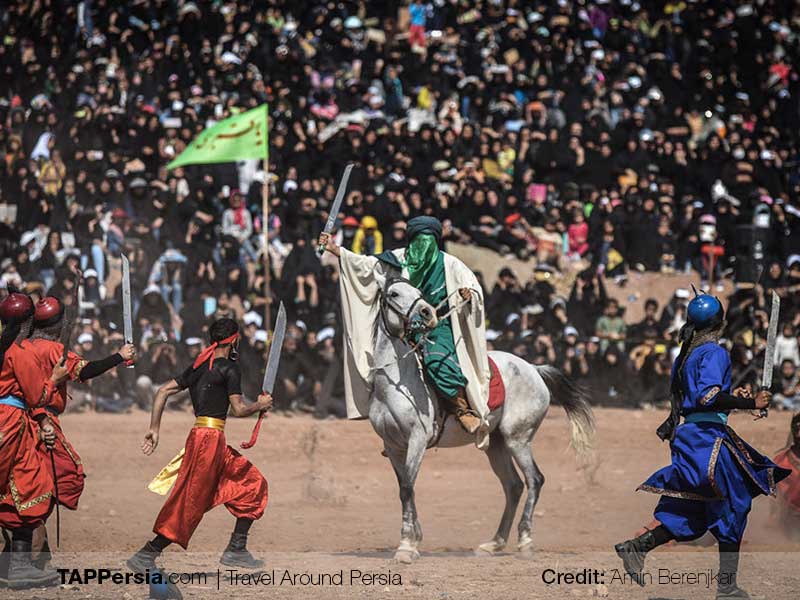 Every religion has its own unique way to show respect for its holy symbols. One of the most popular methods in most Abrahamic religions is votive offerings. In Islam, it’s called Nazr or Nazri. A Nazri can be an object, given to a mosque or directly to the less fortunate. Sometimes a Nazr could even be a service you provide in order to help people like working in retirement homes or hospitals. But the most favorable form of Nazri is serving food.

Iranians cook Nazri usually in Muharram  which is a special month for Shia Muslims. They mourn the martyred of Imam Husain ( Husayn ibn Ali) the third imam of Shia. In this month and especially the first 10 days, every neighborhood gets filled with huge pots of aromatic Nazri food. People will wait for hours in long lines to taste Nazri. Due to the generous usage of saffron and fresh lamb coming from animal votive offerings, Iranians believe that Nazri food just tastes better.

Khoresht Gheymeh is the most popular Nazri dish in Iran. It consists of chopped lamb, tomatoes and split peas and is served alongside rice. Khoresht Gheymeh is easy to make, and by using every part of lamb in this dish, nothing would go to waste. Adas Polo (rice, lentils, and raisins) and Ghormeh Sabzi (chopped lamb, vegetables and dried lime) are also popular. Some people cook Sholeh Zard (a golden paste made from broken rice, saffron, and cinnamon) which gets served as a dessert. 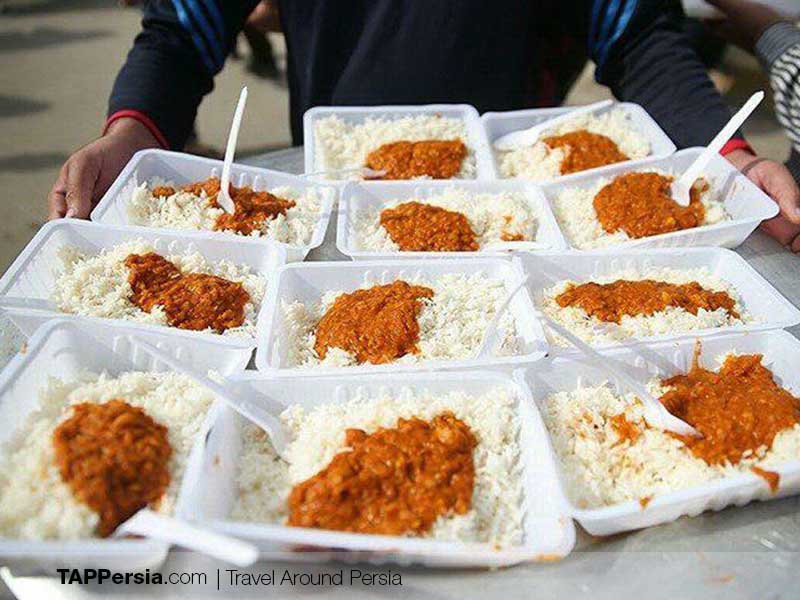 Mourning Ceremony ( Daste Azadari) in Iran contains a group of people especially men who come together to mourn for the death of Husayn Ibn Ali, the third imam of Shiites who is the grandson of Prophet Muhammad and was killed in the battle of Karbala. This group consists of the symbolic tools call Allam or Jaride that is usually made of metal and the average height of 5-6 meters with the colorful cloth attached to the top. Zanjir or chain is the other tool which is used by men for self-beating and mourning(Muharram in Iran). Also, special kinds of music or mournful dirge is used which is played with musical instruments such as Daf and Sanj that changed during the time to Drum.

Iranians implement this kind of mourning ceremony to show their sorrow for the loss of their dear and oppressed imam which fought for his family and his religion.