Iranian Turk ethnicity consists of different groups such as Azeris, Turkmens, and some other Turks who are living as divergent tribes in different parts of Iran. These tribes are the minorities of the Turkic-speaking people. They include Qashqai people, Khorasani Turks, Afshar people, and Qarai Turks. The majority belongs to Azeris. Although their languages are Turkic-originated, every group speaks a non-identical Turkic language. Azeri Turkic language is much like Turkish. Khorasani and Turkmen speak much like Turkmen of Turkmenistan. Qashqai people speak Qahghai Turkic. They were Nomads but today most of them live a sedentary life. Yet a small part of them has remained the same. In this short journey, we will learn more about Azeris, and leave Turkmens and Qashqais for another time.

History and Language of Azeri Ethnicity in Iran 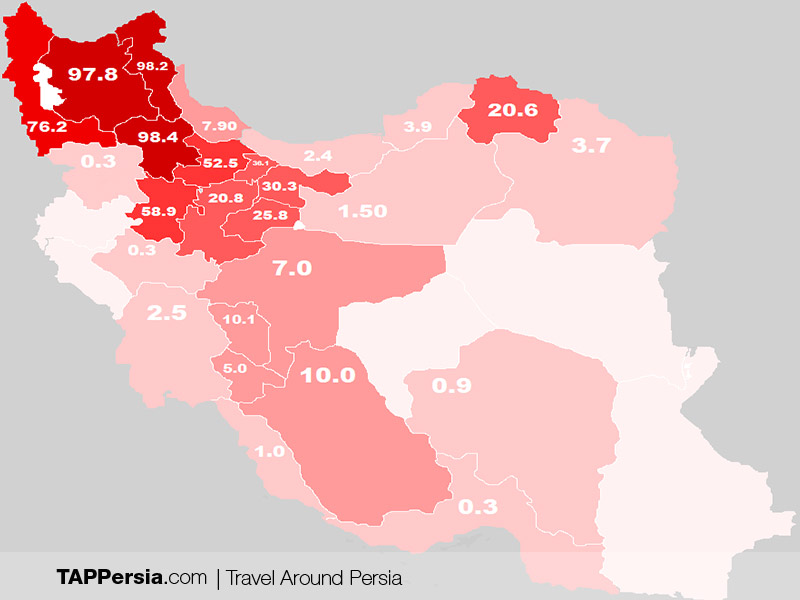 After Persian ethnicity, Azeris are the largest group in Iran. They are concentrated in the northwest of the country. Mainly living in Azerbaijan, Ardabil, Qazvin, Zanjan, and Hamedan. In their dialect and Feeling of ethnicity, Azeris are different from other Iranians but in their religion and formal Persian language are the same. Azer Turks have a similar language, religion, and ethnicity with the Caucasus. The reason is Azerbaijan and Caucasus were one but after the Treaties of Gulistan and Turkmenchay, Caucasus separated from Iran. 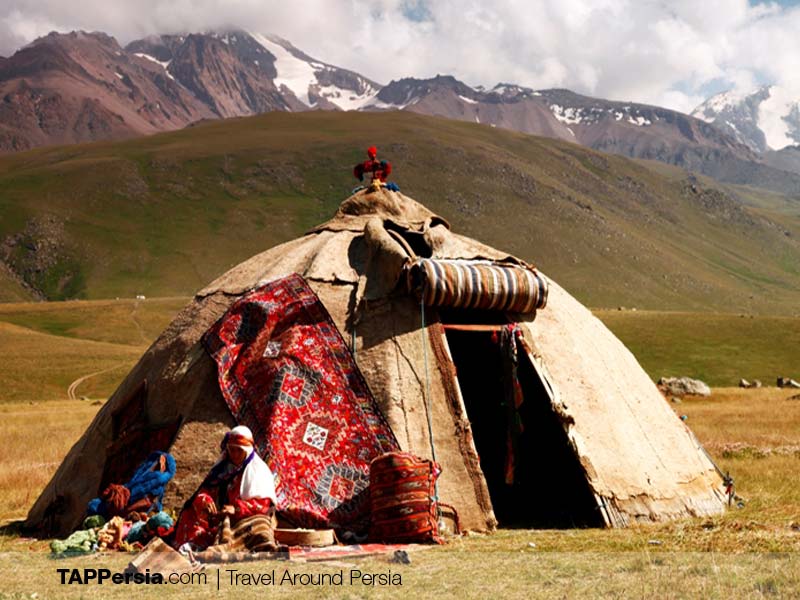 There are many tribes in Azeri ethnicity. It’s nice to know that Shâhsavan is one of the biggest tribes in Iran. Among all the interesting things about them let me tell you about their semi-hemisphere tents. They are like a woolen igloo. Maybe later in the future we can take a journey to some of the most important Iranian tribes and learn about their lifestyle more.

Characters and Traits of Iranian Azeris 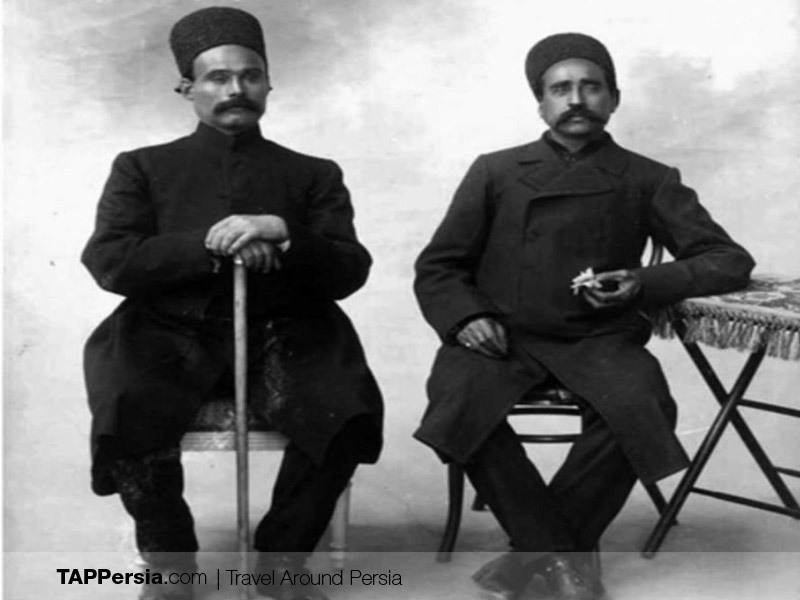 Turks are highly Patriotic. A short look at Iran’s history would be good evidence of this truth. Courageous men like Sattar Khan, Baqir Khan, Babak Khorramdin, and many others fought for the freedom of Iran. These men rose from the northwest. And in different moments of history, Azeri people stand out to protect Iran’s borders. Without their efforts, we would have lost those lands of Iran years ago. 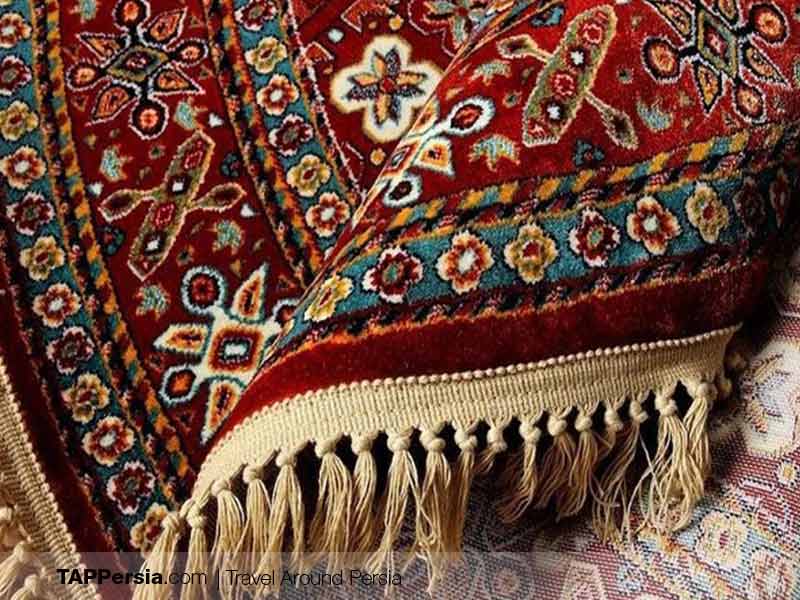 Azeris have been known for their art since ever. They have done awesome work on the carpets. Tabriz is one of the oldest carpet weaving cities in the world. Tabriz carpet is famous not only in Iran but in the whole world. As a result of Ottoman–Safavid War, many Tabrizians migrated to other cities in Iran, especially to Isfahan. And this opened a new page on Isfahan’s history and art book. Tabriz people have been successful in many fields. Tabriz has been the birthplace of many popular Nastaliq calligraphy masters and poets, too.

Azeris are Shai Muslims and they are Zealous about it. And As we trace it back in history, they have always been loyal to their religion . 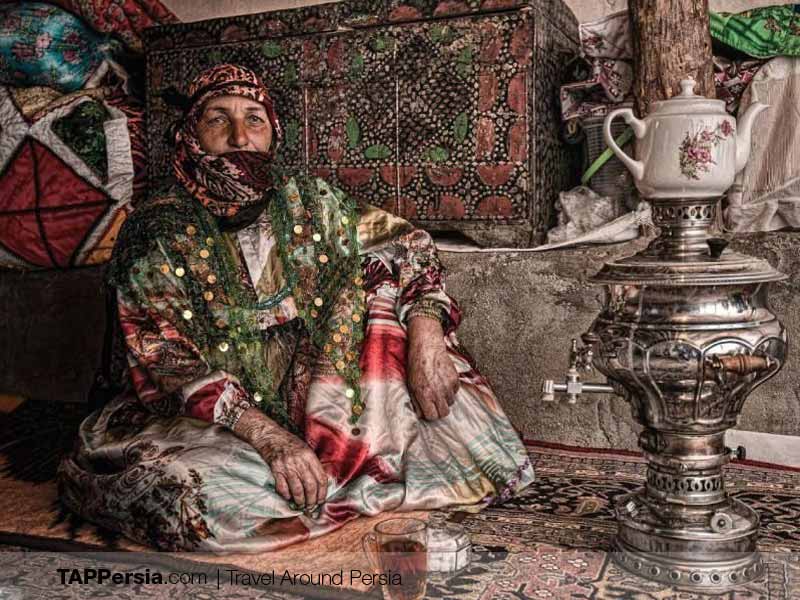 Yes! Azeris are hospitable, too. A. V. Williams Jackson, in his book, speaks about Tabrizians’ unique hospitality. They pay especial respects to their guests. You can feel that by their kind nice behavior. 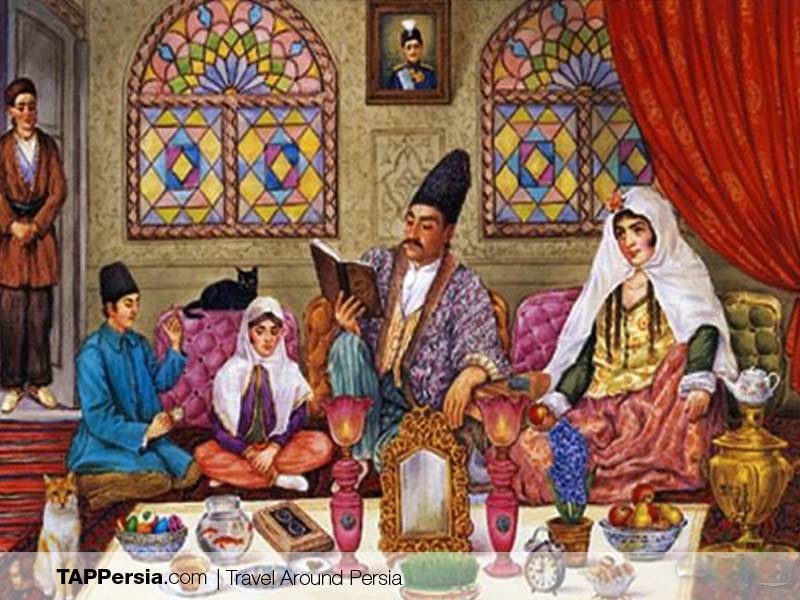 Among all Iranians, Azeris are famous for being so zeal about their language. It is such that most of the time they have a resistance to speak Persian when there are non-Turkic people around. And their advice for those of you that do not know Turkic is to learn the language. This is true while many other Iranian ethnicities are shy to speak their own dialect or language among other ethnicities. 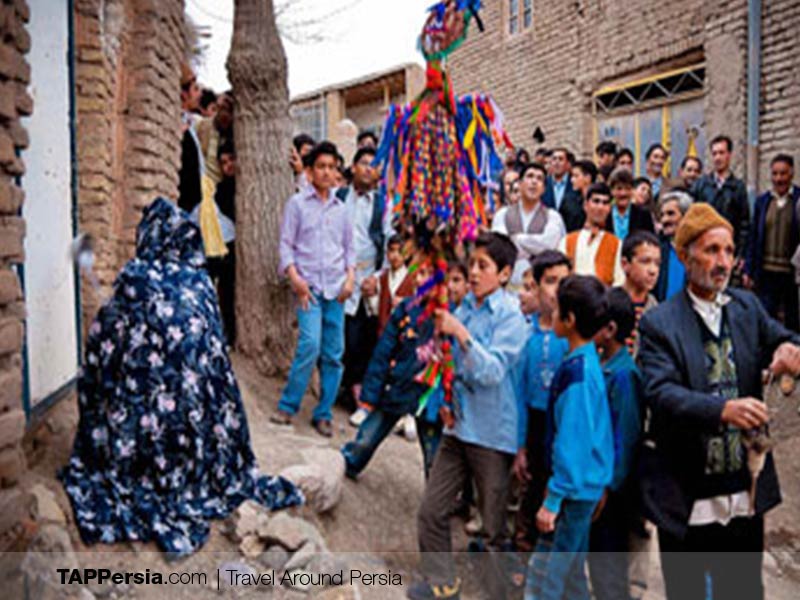 Many parts of Iran have a dry climate and it is typical that in some areas it doesn’t rain much. In the time of drought people of this area gathered together and prayed for rain. They decorated a big ladle, “Chamchameh”, with colorful cloth. And went to their neighbors’ door with their Chamchmeh. They started singing a special song asking God for sending rain. And then the neighbor came out and poured some water, salt, or bread in their ladle. Water, salt, and bread were the symbols of bliss and abundance. 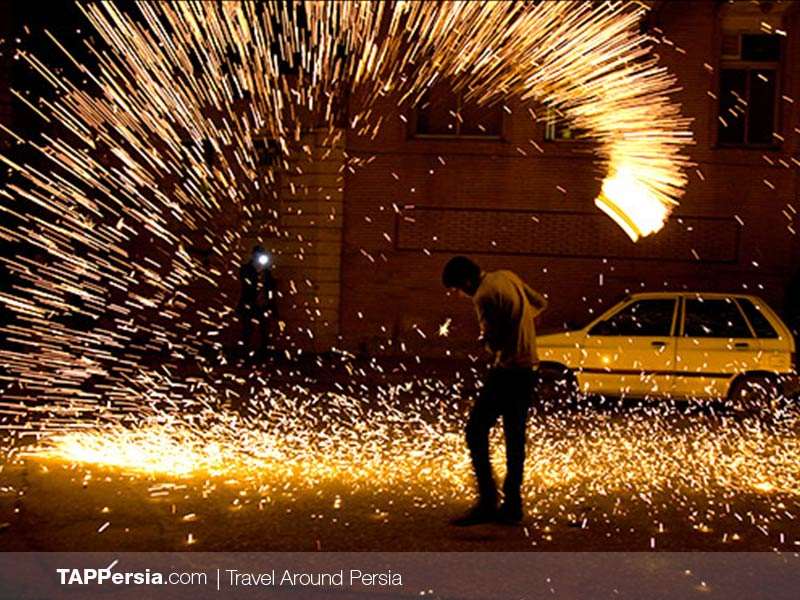 Shâl Sâllâghmâgh is another weird attractive form of Halloween in Iran. On the last Tuesday of the year, at Chahar Shanbeh Soori night the youth went out on rooftops of their family friends and relatives. Those days there were holes on rooftops. Young boys hung down a long cloth or a veil through the hole and waited for new year’s gifts. The household would put some candies, fruits, nuts, woolen socks, eggs, or some money in the cloth. Then they would pull it up and go to the next.

But the story goes on. This tradition was used as a way of making a marriage proposal. Sometimes the young man was in love with the household’s daughter. So whatever gift the household put into his veil he would not give up. This way the household noticed what had been going on. Afterward, they would figure out who he was and if their answer was yes they would fasten a belonging of their daughter to his veil. When he pulled it up and saw the sign he would know they had accepted his proposal. 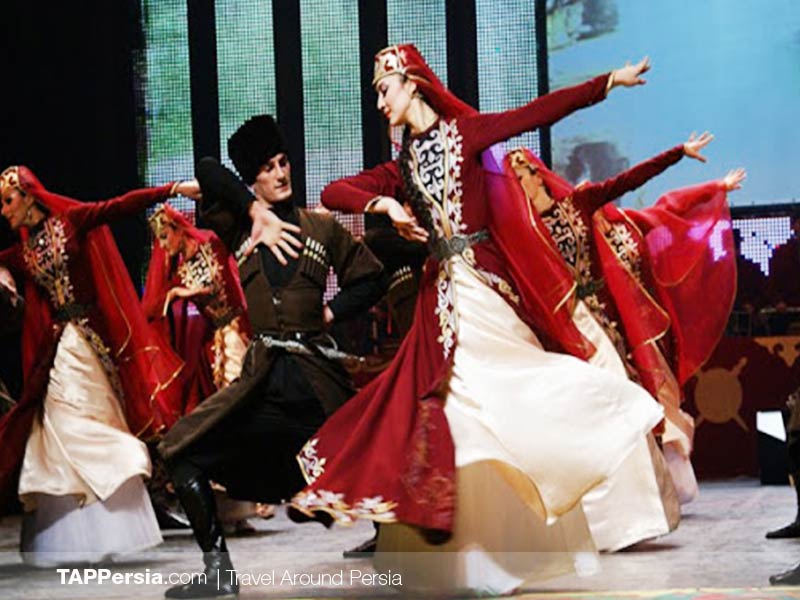 The history of dance in Azerbaijan goes back to two-three thousand years ago. People who provided their food from hunting performed such subtle and stunning moves that seemed like magic. And on the other hand farmers’ dance had the moves similar to harvesting crops and picking the grapes. They danced to pay their gratitude and for asking abundance and bliss from God. 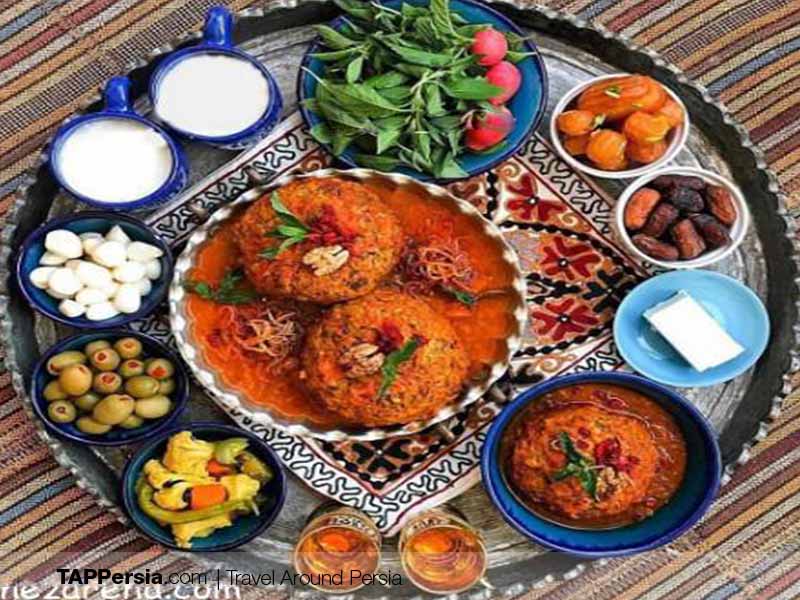 One of the most known Azeri foods among Iranians is Kufte Tabrizi. Koofteh is a  meatball, almost baseball size, mixed with smashed split peas and some veggies. It is stuffed with walnuts, plus barberries, cooked in broth. It has a great smell and a flavourful taste. The mixture inside and outside can vary but in any way you make it, the original dish is absolutely not vegetarian. 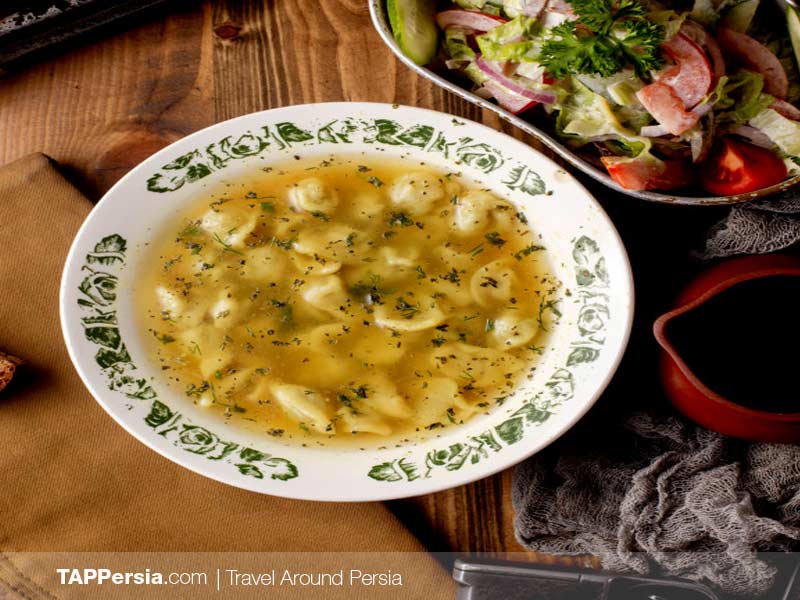 A side dish for Aboosht, Dushbara is small dough balls stuffed with meat, onion, and tomato. Usually, they serve it with some dry peppermint and vinegar. 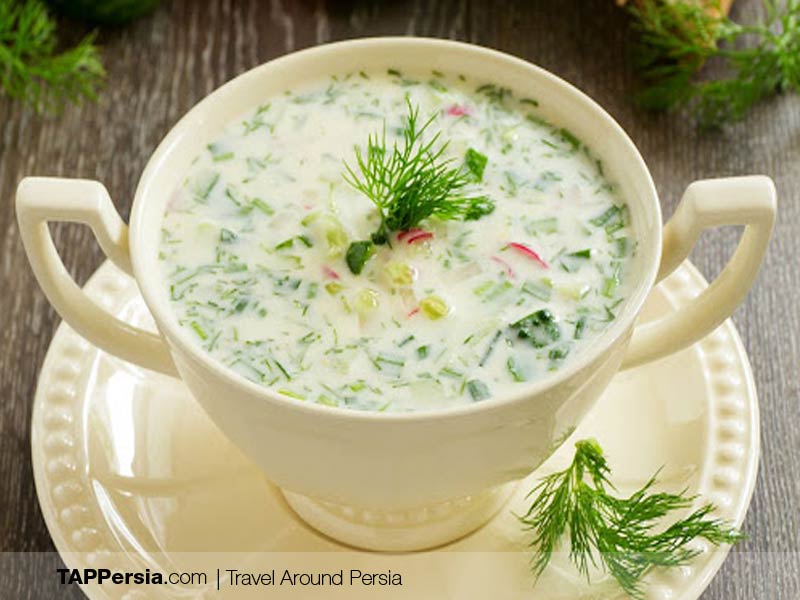 Similar to Kurd’s Doogheh-va Aush, Duga is made up of rice, eggs, Chickpea, meat, onion, garlic, and some herbs boiling in “doogh” which is a  watery yogurt product. 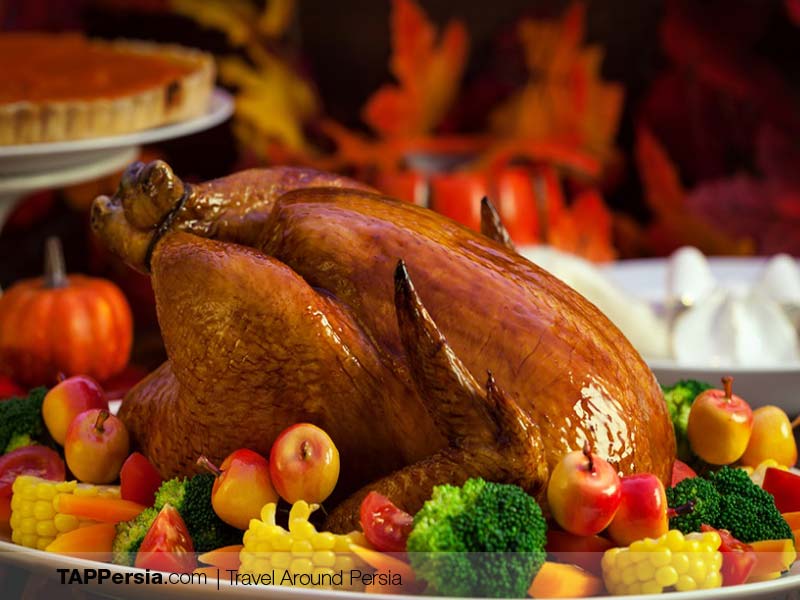 Lungi is a popular food in Azerbaijan. It is roasted chicken stuffed with a mixture of walnuts, onion, and good-smelling herbs. 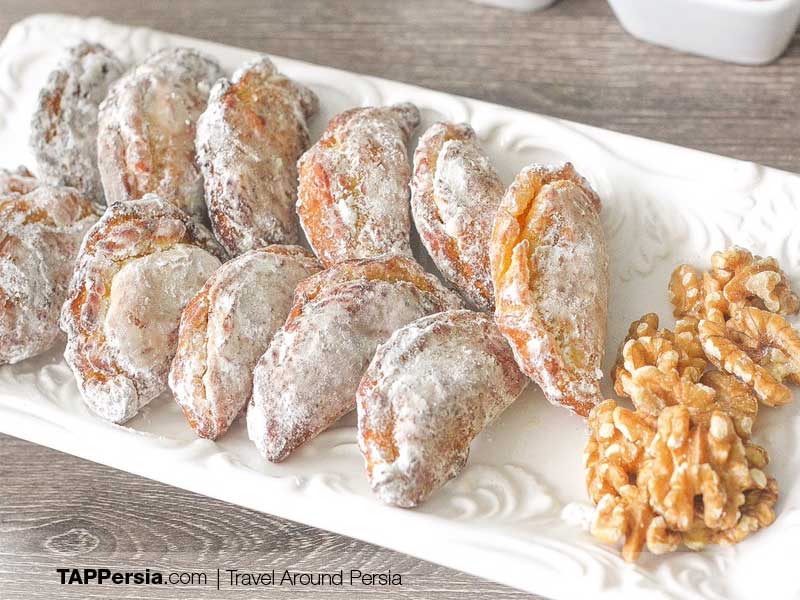 Qutab is a kind of Pancake with meat, cheese, and spinach. These pancakes are a bit salty and are served with yogurt. 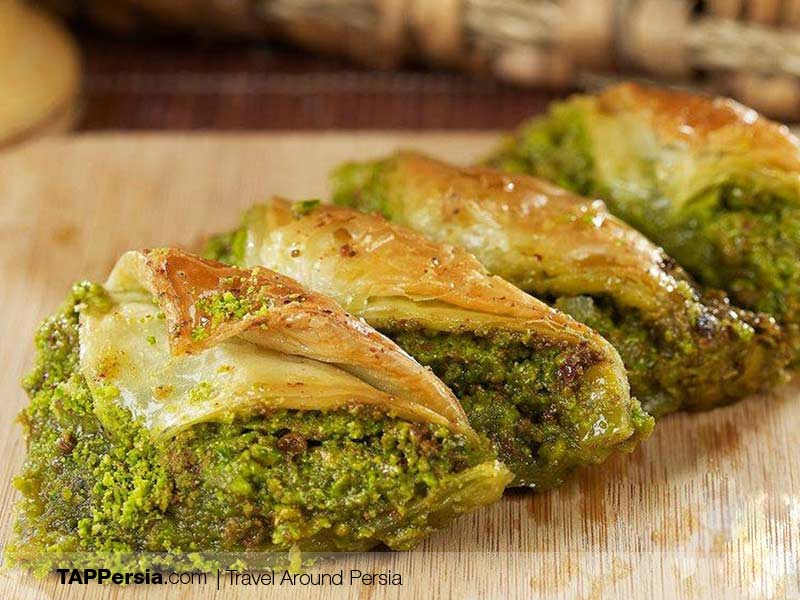 If you have tried Turkish Baklava so you are familiar with this one. Layers of filo are filled with smashed nuts and then sweetened with syrup. The syrup has other ingredients that give it a heavenly taste. 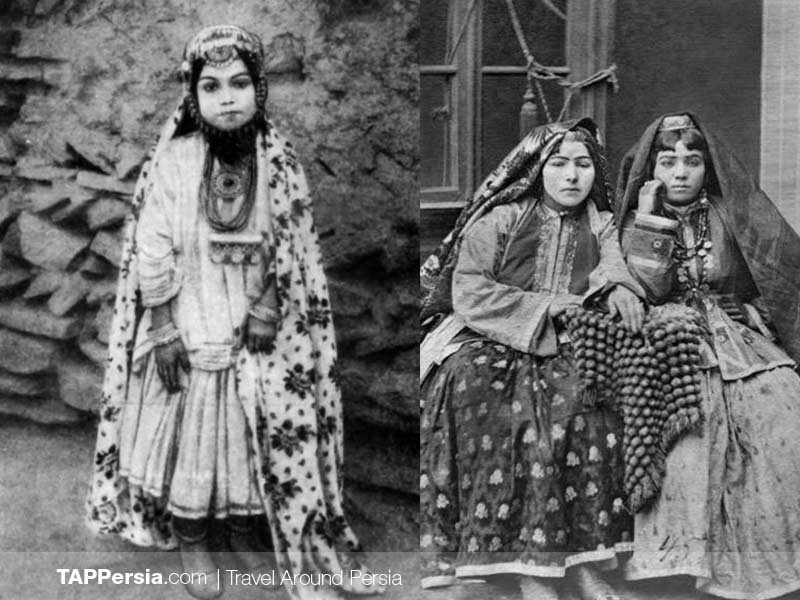 People’s dressing is a symbol of their artistry and culture. The design and color of the Iranian traditional dressings have been always inspired by nature. Azeri clothing is one of the remarkable ones in our country. Nowadays traditional dressing is less seen among the city people but in villages, you can see the old wearing them. Azeri clothing is three-piece. One for covering the head, one for the body and one for the feet. The texture depends on the money you want to spend on it. 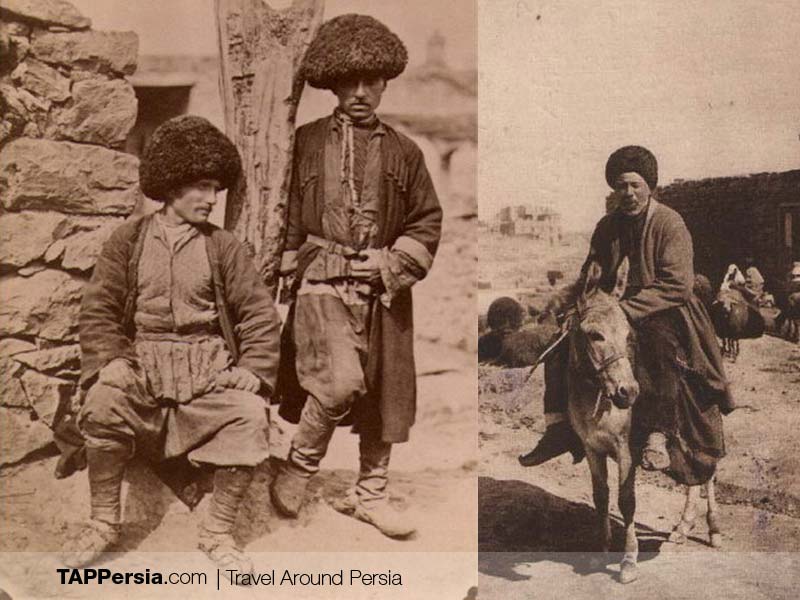 Similar to other ethnicities Azeri women usually wear scarves to cover their hair and then long dresses. Or Long skirts with a shirt on top.
And men wear long jackets on plain shirts, with tight pants and long boots plus a hat which they call “Pâpâkh”. Normally the dressing according to different occasions can change so it is exactly the same about traditional clothes, too.