Located in Isfahan, adjacent to the royal Aliqapu palace, stands the largest and most luxurious building of the entire royal gardens as Chardin the French traveler of the 17th century describes it. The many historians who have visited this gem of the Safavid era in its time of glory, assure us that Chehel Sotoun was no ordinary palace, in fact, besides being the literal gem of its time, it was the manifestation of the ostentatiously powerful Safavid era.
Chehel Sotoun Palace
The estate extends to almost 7 Hectare with the palace located in the center. The grand pool which extends toward the royal establishment reflects on the palace and adds to its glory. The Chehel Sotoun garden is among the 9 outstanding gardens in Iran, which portrays the traditional Persian garden characteristics and is registered as a UNESCO world heritage.
Chehel Sotoun was preserved only for the most important of events, coronation ceremonies and receiving high ranked ambassadors. We could even call it the show-off of the Safavid king Shah Abbas II, to portray the glory of the Safavid empire. That is to say, the garden itself was created by Shah Abbas I but the structure was created by his grandson Shah Abbas II. Just as a reminder Shah Abbas was the mastermind that turned the struggling Safavid dynasty to a major world power in the 17th century. It is said that Shah Abbas I himself sketched the layout of these gardens, which reminds us of Cyrus the Great who is said to have designed Pasargade himself.

The façade of Chehel Sotoun is entirely wooden as we see it nowadays, but originally all the façade was covered with mirrors, in fact, it was the first-ever mirror adorn building in the empire. While that may not seem notable to us today, but back then mirrors were only hand made in Venice and delivered by ships which means so much of it would break before even been delivered. So just imagine how inconceivably expensive and luxurious mirrors were at that time. In the 19th century, the British diplomat J. J. Morier writes: from a distance, with the inlaid mirrors, the entire structure seemed to be made of glass.
In fact, Mirror work which is now a decorative art in Iran started from here, Chehel Sotoun Palace. Nonetheless, once you visit Chehel Sotoun, even after seeing various mirror works all throughout Iran, you will still be surprised by the mirror works that still stand, since the first and only place that you can find curved patterns is Chehel Sotoun and while they are 350 years old, the motifs are still completely modern and impressive. It’s hard to not wonder the amount of labor, precision, and dedication that has gone into this timeless masterpiece. 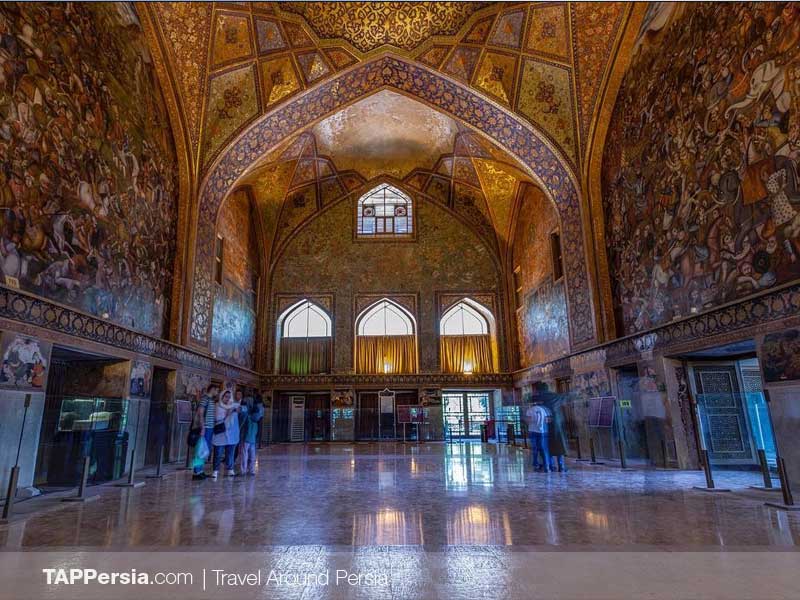 Painting and art enthusiasts will especially enjoy Chehel Sotoun since the inner 13 meters high main reception hall is adorned with grand paintings of kings, in their wars and celebrations. Also, such scale for paintings is one of kind in Iran. This hall was designed and decorated to impress and so it does, even after several invasions and all its finest furniture looted and destroyed it will still succeed in impressing all visitors. The vivid colors of the wall frescos which “yes” include real gold will make you wonder of the glory, wealth and power of the kings who created such a masterpiece that has withstood the test of time.
Been the royal coronation palace, Chehel Sotoun did not disappoint, historians who visited this structure have notably mentioned and admired this edifice, so be sure to note it as your must-see attraction while in Isfahan of your journey throughout Persia.
Visiting Chehel Sotoun, you’re in for a treat, not only will you discover the palace and its centuries worth of history but you can also walk through the many collections it beholds, the inside collection of valuable items and tile collections on the garden walls, where you will find a series of survived tiles for irretrievable structures from all over Iran.