The Signature Dish of The North, Baghali Ghatogh 

The history of any city can be recognized from Rasht local foods, in any city or country, food is considered a cultural symbol. Gilan is also one of the cities that has a very high variety of food, so much so that in 2014, its name was registered as a creative and diverse gastronomic city […]

Reshteh Khoshkar is one of the many traditional sweets of Gilan. The cookies are famously used for breaking the fast during the month of Ramadan. So if you travel to Gilan province during this month, there is a good chance that you will see many places offering these sweet cookies. (The month of Ramadan moves […]

Northern part of Iran has many traditional dishes, especially famous for the unique delicious tastes. The finger-licking “Kabab Torsh” is just one of them. “Torsh” means sour, so the name Kabab Torsh means sour kebab in Persian. Other famous dishes in the north of Iran are Fesenjan (It has become popular all over Iran), Mirza […]

Throughout history, humans have used their genius to find new methods of food preservation. Freezing, making jam, using vinegar and smoking are just a few examples. In the Northern Iran, smoked fish is very popular.They gut the fish, put them in a pool full of salt for several hours, then Hang them inside a room and smoke them to a golden color.

Torshi-Tareh or Torshe Tare is a flavorful Gilani cuisine with amazing taste! It’s a traditional food from the Northern part of Iran, especially Rasht. This delicious dish has found its way into dinner tables of almost all Iranians and is highly recommended to vegans. Ingredients 1 large bunch of mixed vegetable-finely chopped; including Chives (or […]

Mirza Ghasemi is a popular Iranian dish, originally from the North of Iran and Gilan Province. This tasty food, aubergine with tomato, garlic and herbs, is also listed among the most common vegetarian dishes you can find in restaurants containing aubergine or eggplant in Iran. Ingredient needed to make Mirza Ghasemi include 5 Unpeeled large […]

In the following, we are going to review the best and most famous dishes of Rasht. Because the variety of food in this city caused it to be registered as a creative city of food by UNESCO in 1994. Rasht’s food is very diverse, and whatever taste you have, you will definitely be treated to a delicious meal in the world of Rashti’s delicacies. So join us to check the list of Rashti dishes and take a tour of its yummy world; 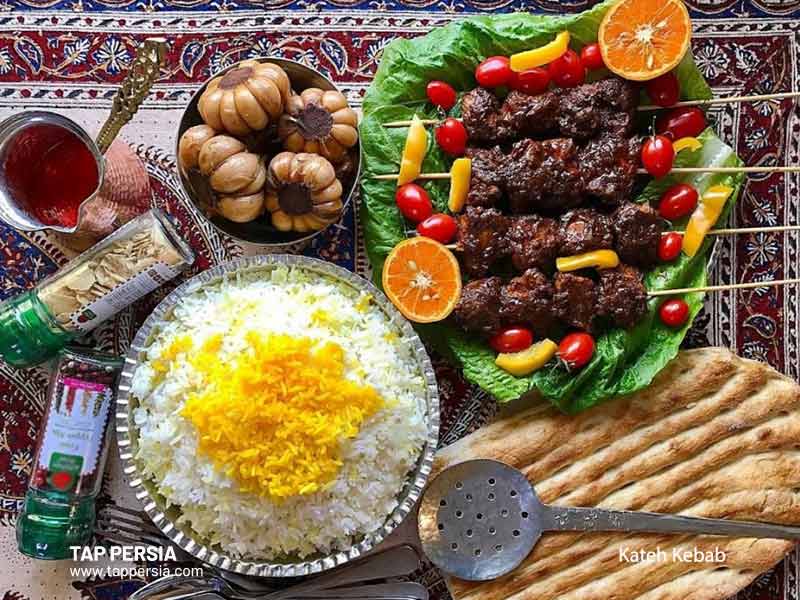 Kate Kebab or Rashti Polo Kebab is one of the popular and famous dishes of Gilan province. The locals use veal to prepare this delicious dish. To make it tastier they let it rest in yogurt, olive oil, and onion juice for about 24 hours before they grill it. This very delicious dish is always served with unique side dishes such as raw broad beans, local cucumbers, Ashpal (salty fish eggs), and of course, traditionally cooked rice.

This dish is one of the most popular kebabs among the people of Gilan and Mazandaran. They make it with both veal and sheep meat. To prepare this dish, they add onions, garlic, pomegranate paste, and chopped walnuts to the meat. And to add a more sour taste to it they use pomegranate juice. They serve the Kebab with Kateh (traditionally cooked rice).

This very delicious stew is very different from Mazandarani sour chicken. additionally, like many other Iranian stews, they use legumes in it. In this dish, there are chicken, split peas, onions, aromatic vegetables (leek, parsley, coriander, mint, …), garlic, eggs, and a little orange juice. After the stew settles, they add scrambled eggs to it and after 10 minutes, they serve it next to cooked rice.

Mirza Ghasemi is a delicious dish that you may have tasted many times. It is interesting to know that the inventor of this dish was a person named Mohammad Ghasem Khan Vali, the ambassador of Iran to Russia and the ruler of Gilan during the reign of Naser al-Din Shah. 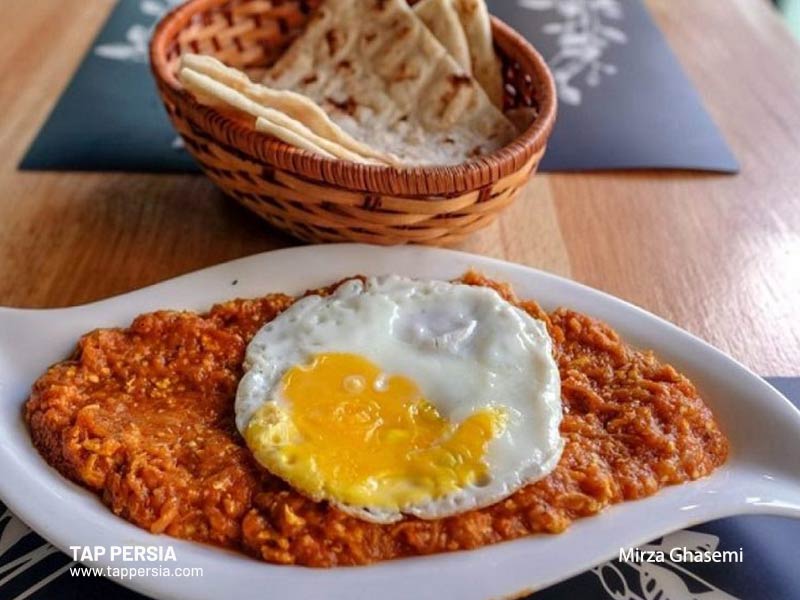 He was very interested in cooking, and after his return from St. Petersburg to Iran, he made this dish popular in Rasht and, adopting his name, named it Mirza Ghasemi. This delicious dish is a combination of grilled eggplant, plenty of garlic, paste, fresh tomatoes, and eggs, served with both rice and bread.

Gilani people prepare Torsheh Tareh with garlic, eggs, orange juice or water, and various aromatic vegetables (leek, parsley, coriander, spinach, and a little mint and blue eryngo). And finally, flour which is optional. They add ingredients. They eat this stew with rice or bread, along with smoked fish or salted fish and various Gilani side dishes such as white radish, garlic, broad beans, etc.

Shevid Qhormeh is basically a stew like Sabzi Qormeh, which they cook everywhere in Iran, with the big difference that the dill is fresh, and they use Reine Claude instead of dried key lime to make it sour. Minced meat, onions, spices, and red beans are the ingredients of this stew.

In preparing this very delicious stew, they use chicken or duck. However, chicken is more popular in Gilan. Eggplant, tomato, prune, black plum, tomato paste, sugar, and spices are other ingredients used to cook this dish. Sometimes they use fried eggplant and tomatoes to decorate it.

Rashti Fesenjan stew is one of Gilan’s famous and common stews that are prepared at weddings and official parties. They usually use chicken or duck to cook this dish. To prepare this stew, they boil grounded walnuts with pomegranate paste and then add chicken or duck until it cooks and the stew settles well. In order for this stew to settle, they give it enough time for the walnuts to release their oil, and sometimes they use a piece of ice or a little pumpkin for this purpose. 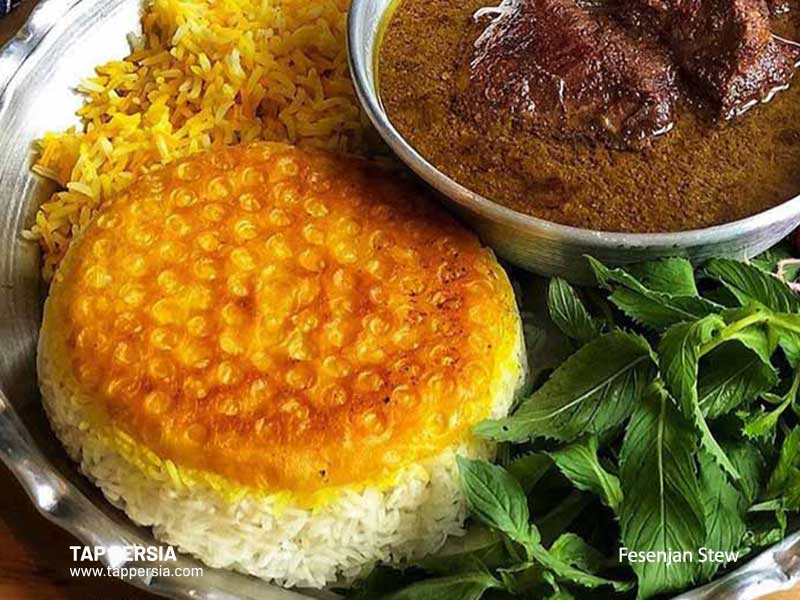 Vavishka is one of the non-native dishes of Gilan, which entered the food culture of the people during the Russian invasion. This dish is also known by the names Jaghur Baghur and Jazbaz in Tabriz. They prepare it with chicken liver, sheep’s heart, and even sheep’s intestines and lungs. Onions, spices, tomato paste, potatoes and eggs are the ingredients of this dish.

This very delicious stew is prepared with meat shaped into balls, aromatic vegetables such as leeks, parsley, coriander, walnuts, pomegranate paste, and pomegranate seeds. The appearance of this stew looks like Fesenjan and it should be quite thick and settled. The flavor of Gilan rice next to this stew makes it more desirable.

If we want to understand the main meaning of Ghelyeh, it is originally a stew with meat in it. Of course, there are different types of these stews. And perhaps the most famous of them is the southern Ghelyeh Mahi. However, with their art and initiative, the Gilanis have a delicious Ghelyeh on their table. And in fact, it is completely compatible with the food available in their area. Above all, fresh garlic (Sir) is the basis of it. Chicken or duck, garlic leaves, onions, split peas, spices, and eggs are the ingredients they use in preparing this stew. It is not bad to know that duck was much more common in Gilani cuisine in the past.

This delicious dish looks like Mirza Ghasemi, But its main base is pumpkin instead of eggplant. Pumpkin, garlic, ground walnuts, sugar, pomegranate paste, tomatoes, and a little spice, especially Persian hogweed (Golpar), are the ingredients used in cooking this dish.

The recipe for this delicious dish is almost similar to Fesenjan stew, with the difference that they use white fish instead of chicken or duck. Some people use sliced ​​white fish to make this very delicious, but it is more common among northerners to use the whole fish. Ground walnuts, pomegranate paste, and fried fish seasoned with salt are the ingredients you need to prepare this dish.

Kal-e Kebab is actually a delicious Gilani appetizer whose ingredients are pomegranate, walnuts, aromatic vegetables (flat sea holly, mint, …), grilled eggplant, pomegranate juice, salt, and Golpar. After preparing this dish, put it in the fridge for a few hours so that the ingredients mix well. 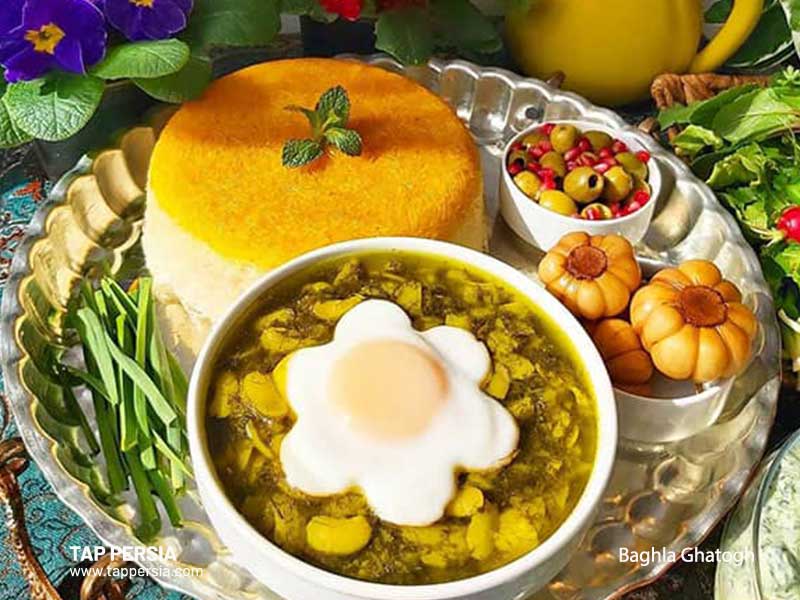 This dish is one of the most famous dishes of Gilani people, whose name you will hear a lot among the list of northern dishes. The basis of this dish, as its name suggests, is beans. To prepare this delicious dish, you need peeled beans, dried dill, crushed garlic, salt, turmeric, and eggs. They also add cinnamon and pepper to it.

Sometimes this northern food is confused with eggplant stew. Ghooreh Mosamma is a colorful and delicious Gilan food that is prepared from the combination of eggplant with fried chicken, green sour grapes, tomatoes, and spices. Vegetables are a good option to serve next to this dish. They eat this yummy stew with rice.