Category: Things To Do In Isfahan

There is a place in Isfahan that lures people into its different spots. Some people come for a nice picnic with the family, some others ride their bikes, walk, or just sit by the river and enjoy the atmosphere. Nazhvan Forest Park is where brings people from all around the city for some leisure time. […]

Isfahan grew at an astounding rate in the16th Century. The city with many green spaces along the Zayandeh Rud River overflows with beauty. All these characteristics make Isfahan suitable for a night walk or in the afternoon after you had a cup of Persian tea. Join us to go through the 8 places to walk […]

Isfahan is the city of art and culture. So it is not a strange thing to have some great bookstores in Isfahan for bookworms and book lovers. There are some bookshops in Isfahan that are so beautiful worth watching. You can walk among the bookshelves even though they may not be in English. Here are […]

International Students at the University of Isfahan – Try Studying in Iran

While my time in Iran, especially in Esfahan, I was lucky to make some friends. One of them is a very big fan of the local professional team ‘Sepahan Esfahan’. This yellow and black colored football team compare themselves with ‘Borussia Dortmund’ from Germany. In the season of 1398/99 (2019/20), they were one of the […]

A modern metro system is running through Isfahan, which has helped the traffic and speeded transportation. Here’s an Isfahan metro guide.

For those travelers who only have a limited time to enjoy all of Iran’s numerous attractions, taking a plane from Shiraz to Isfahan is one of the most recommended traveling options. Iran’s major airlines provide one-way and round-trip tickets each week. In order to find cheap flights and enjoy a comfortable trip, we will answer […]

A Two-Day Isfahan Itinerary for Your First Visit

A city in central Iran, Isfahan is a must-visit for its historical significance and its beautiful mosques, palaces and bridges. Isfahan was twice the capital of Persia, and many of its most striking buildings were constructed during the Safavid dynasty between the 16th and 17th centuries. The modern-day Isfahan is a charming mix of old […]

Isfahan is one of the historical cities of Iran, which has many historical and cultural monuments due to its rich history. Most of these monuments are on Iran’s National Heritage List. This city, which has always attracted the attention of kings and was also the capital of Iran in different periods, has lots of sights to marvel at. So join us to take a quick look at the things to do in Isfahan; 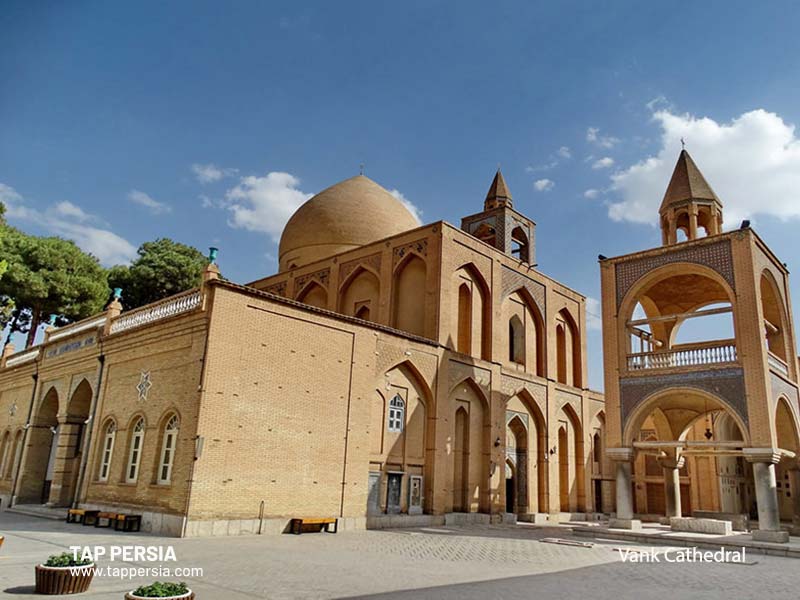 Vank Church or Amna Perkich Church is located in the Jolfa neighborhood of Isfahan and is one of the historical Armenian churches of this city. They built this church in an area of ​​8,731 square meters during the reign of Shah Abbas II. The church building occupies only 3,857 square meters of this space. And the rest of it is green space and Vank garden. The bell tower of the church has three floors and a clock weighing 300 kg on the second floor. The dome of this church was built like the dome of Iranian mosques in the era.

There are oil paintings on the walls, arches, dome collar, and inside the dome. They used gold and Illuminated manuscript in the decoration of this church which is unique among other Armenian churches.

Isfahan Music Museum is located on one of the most famous streets of this city, Cheharbagh Abbasi, and on the grounds of the beautiful Hasht Behesht Palace. This museum is the first private music museum in Iran.

“Music museum” is a place to store and visit all kinds of musical instruments. This museum represents the history and valuable music culture of the country. In Isfahan Music Museum, in addition to familiarizing yourself with more than 300 types of musical instruments, you will also benefit from live music performances. Specialist experts, familiar with the music and fluent in several living languages ​​of the world, will explain and answer all your questions. Khaju Bridge has 24 arches, located on the east side of the Si-o-Se Pol bridge on the Zayandehroud river. They say this bridge dates back to 1650, during the reign of Shah Abbas II. In the middle of this bridge, there is a special building. It was for the temporary residence of the Safavid Shah and his family. The length of the Khajo Bridge is 133 meters and its width is 12 meters. Above all, it has very beautiful and amazing architecture and tiling.

In the corners of the eastern side of this bridge, there are two stone lions. They say they are a symbol of the Bakhtiari troops who were the protectors of Isfahan and Zayandehroud.

The Shah Mosque or Imam Mosque of Isfahan or the Abbasid Grand Mosque belongs to the Safavid period. You can find it in the southern part of Naqsh-e Jahan Square. Truly we can call this mosque a masterpiece of architecture, tiling, and carpentry of the 11th century. There are some eye-catching inscriptions on its main entrance.

In the two corners of the courtyard, the Soleimani and Naseri schools attract your attention. Both schools belong to the Safavid period. In this mosque, there are several decrees of Shah Abbas installed on stone tablets. In the center of the large south dome, there is a sound reflection. It is where many gather and some sing to test this wonderful architectural masterpiece.

The Si-O-Se Pol Bridge, less known as the Allahwardi Khan bridge, has 33 arches. They built it on the Zainderud river during the reign of Shah Abbas Safavi. This bridge dates back to the year 1600.
During the Safavid period, Si-o-Se Pol was the venue for the water-sprinkling ceremony and also for the Armenian pilgrims of this city. This monument is one of the most amazing bridges in the world and a masterpiece of Iranian and Safavid architecture. And finally, it is 295 meters long and 14 meters wide. 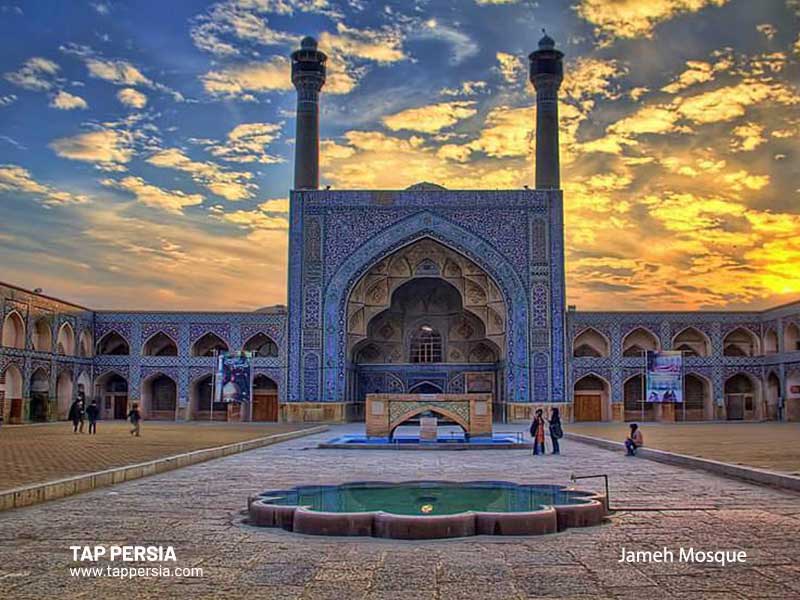 Isfahan Jameh Mosque is one of the oldest religious architectural complexes in Iran. The current appearance of the mosque is mainly related to the constructions of the Seljuk period. But its renovation and additions are related to the later periods, especially the Safavid era. However, in some excavations in this area, they have discovered pre-Islamic items.
Some call this mosque, Jame Atiq Mosque. You can find it in the old part of Isfahan, in Qiyam Square, Allameh Majlesi Street, on the west side of Hatef Street, and at the end of the Grand Bazaar. In general, as much as Naqsh-e Jahan Square and the historical buildings around it remind the architecture and art of the Safavid period, the Juma Mosque and the neighborhoods around it tell the legend of life in the Seljuk era and before that.

Ali Qapu Palace, in Naqsh Jahan square and opposite Sheikh Lotfollah Mosque, is another fascinating masterpiece of Safavid architecture. After the transfer of the capital from Qazvin to Isfahan, the Shah used to receive the elders and important personalities in this palace. Ali Qapu Palace has 6 floors and each floor has its own special decorations.
On the sixth floor of this palace, there is a hall, the sound room. This hall is built in such a way that, like a recording studio, it removes extra reverberations from the sound and delivers it smoothly to all parts of the hall. Everywhere in this hall, there are beautiful stucco moldings in the shape of vases. 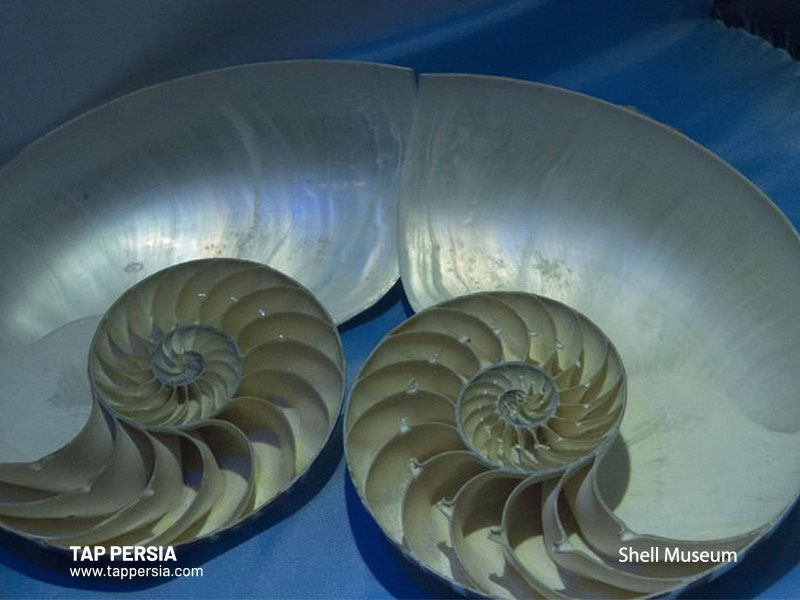 Isfahan Sea Shell Museum is the first museum of shells and snails in the country. You can visit this museum in the heart of one of the greenest sightseeing places in Isfahan, Najvan Forest Park. They keep samples of molluscs, echinoderms, and crustaceans in this collection. They include sea stars, Sea urchins, and sea shells. These pieces have been collected from the waters of the Persian Gulf, the Oman Sea, the Caspian Sea, and other seas and oceans.

Chehel Sotoun Garden is one of the tourist attractions of Isfahan city and there are few people who do not know it. This garden has an area of ​​67 thousand square meters. That’s why its construction has lasted for years. In that period, they called this garden, Jahannama Garden.
You can find this garden in Imam Hossein Square, on Ostandari Street. In fact, the Chehel Sotoun (Forty-Column) Palace has twenty columns. It is because of the reflection of the 20 columns of the mansion in the pond in front of it, that they call it so. But some historians believe that the palace that Shah Abbas II completed had forty columns. And in a fire in 1707, only twenty columns remained. Mirror works, large wall paintings, and wooden columns are among the eye-catching beauties of this palace. The doors and windows are inlaid and show authentic Iranian art. Safavid rulers used to receive guests and foreign personalities in the central hall of the palace.