The Vakil Bath is an outstanding example of Zand Dynasty architecture. It was built in the center of Shiraz under the direct order of Karim Khan Zand, who was the king of Iran at that time. A multitude of visitors holds their head up high above the ground when they see the ceiling in this structure. Because of its impressive ceiling, every inch of this building gets marvelous.
The Vakil Bath of Shiraz is one of the largest traditional baths in Iran. The bathhouse had been used up to 90 years ago, then for a while, it became a traditional gym, for Pahlevani and Zoorkhaneh rituals, which is the place of historical Iranian athletes that is based on the growth of ethics in sports and then became a historical monument.

A Bathroom Immersed in Art and Architecture 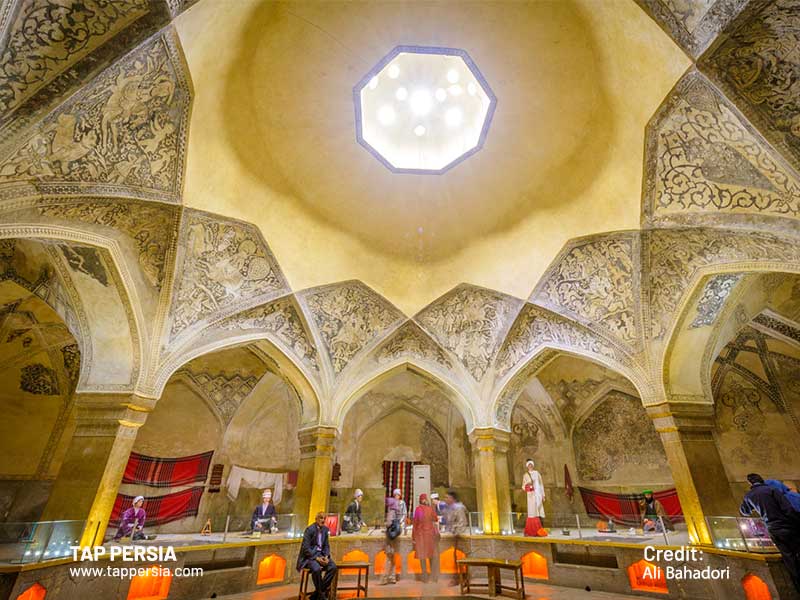 Just like other baths in Iran, Vakil Bathhouse is built based on a standard and highly-developed architecture. A distinguishing fact about Vakil Bath is that its light is provided by the goblets that are designed in the ceiling. There are also some special platforms for changing rooms.
The admiring paintings on the walls of Vakil Bath have interesting themes of Persian mythology, epic, and religious narratives that have strong roots in the beliefs of the people. They are images with religious themes such as Ishmael and Abraham or the story of Prophet Yusuf falling into a well, and love stories from ancient Persian tales such as Khosrow and Shirin and some other drawings such as flowers and vases.

Although the construction of the Vakil bathhouse dates back to about 260 years ago, the most intelligent architectural principles have been used in its construction. So that the porch, from the front door to the bathroom’s junction with the outside, was built on a slope. The philosophy of building this sloping road, which continues to the locker room, is not to let hot air out of the bathroom and to adjust the body temperature when leaving the bathroom. 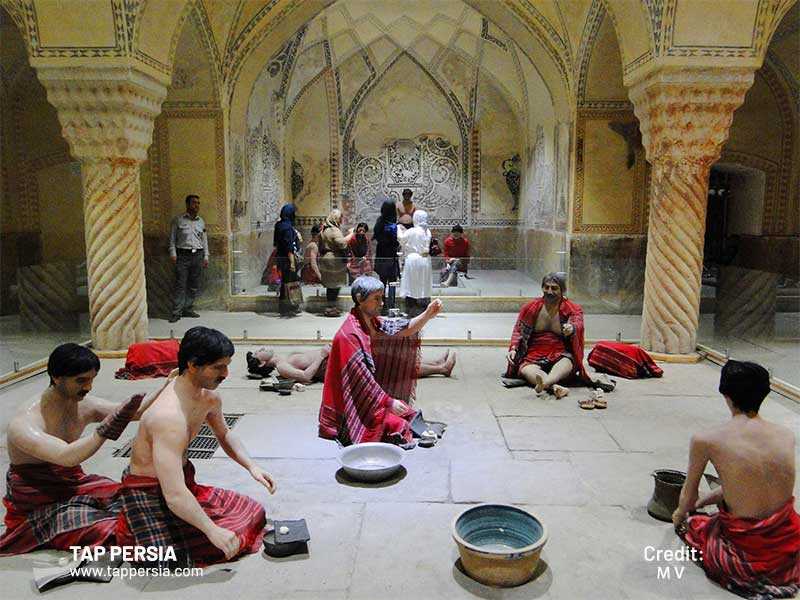 Bath time in the days gone by involved more than just cleaning yourself. People interacted with one another and talked for hours afterward. It is a natural thing in Iran that strangers easily communicate with each other and talk about their lives.
In traditional baths including the Vakil Bath in Shiraz, in addition to bathing and Persian massage, there were ceremonies such as Hanabandan (ringing the bell), which is a traditional ceremony before marriage ceremony that you can read more about here(wedding traditions in iran). Cheleh (washing in water) for babies is also one of the ceremonies that took place in traditional baths. These mysterious baths are where a lot of mothers find their son a bride! 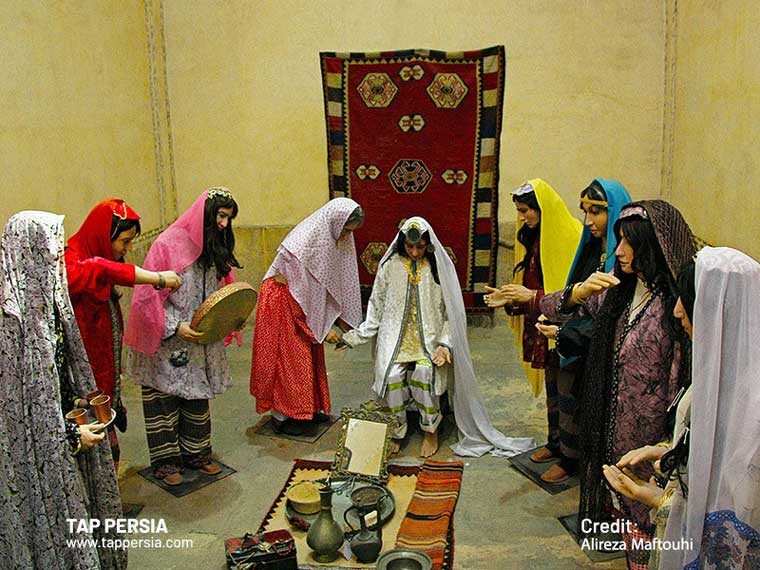 In a part of the Vakil bath in Shiraz, holding the Hanabandan ceremony is depicted as an ancient custom, which is completed by singing the music “Vasoonak”. The content of Vasoonak is a verse describing love and wishes.
The bride is taken to the shower or the bathroom treasury and washed, and then she is placed on the floor of the bath and a piece of rock candy is placed at her feet. At this time, “Dalak”, who is the masseur, enters and starts using henna on the bride’s hands and feet. While henna is applied to the bride’s hand, some women gather around the bride and sing a special “Vasoonak”.

The “bathing mother and baby”

The “Cheleh” is another ritual that on the 40th day of the baby’s birth, the nanny first wash the child with cedar and water, and then the child was held on the mother’s head, and the child was rinsed with a bowl called “forty keys”. The forty-keys is a bowl on which forty names were engraved with the names of God.”

When is the Right Time to Visit Vakil Bathhouse?

Most people travel to Shiraz during the Nowruz holiday. In Nowruz, historical and natural attractions are too busy, so we suggest that you visit Shiraz in mid-May or during the early months of autumn.
You can enjoy the rich smell of orange blossoms in the city, and see many historical monuments in less time.

How to get to Vakil Bathhouse 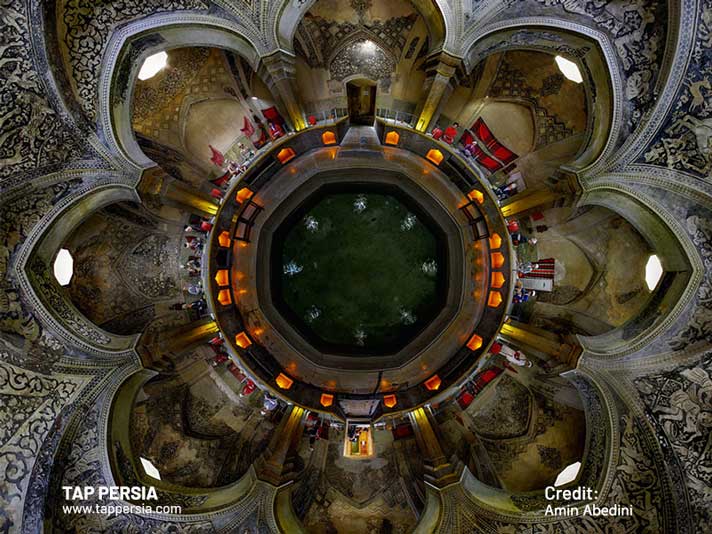 If you are traveling to Shiraz in your vehicle, you should proceed to Karim Khan Zand Boulevard and enter Taleghani Street after passing Shohada Square. It’s best to park your car here and the Vakil Bathhouse door will be visible after 100 meters.
However, if you use public transport such as the subway, it’s better to walk to the bathroom entrance after you arrive at the Zandieh station.

A Walk in the history

You can see all the houses, Iranian bazaars, mosques, tombs, and citadels of Karim Khan Zand since Vakil Bath is inside the historical site of Zandieh. And you can walk the distance from 1 to 15 minutes to there.

Rest and Eat nearby 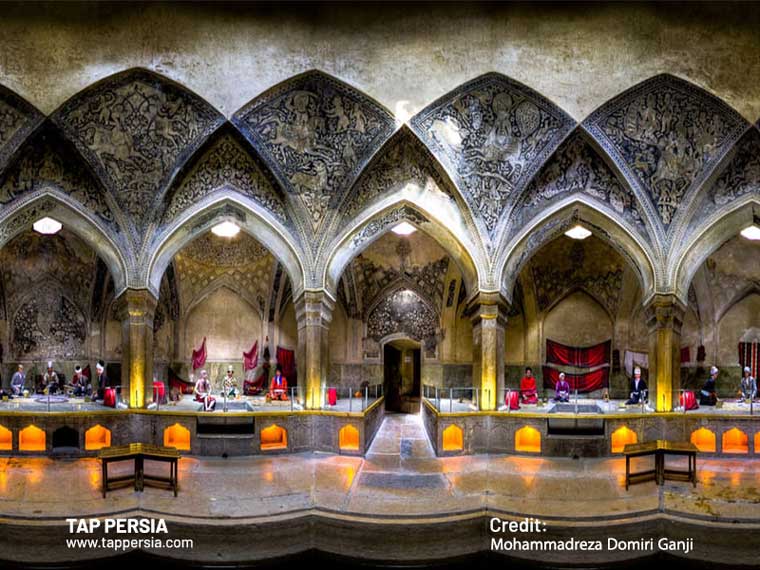 There are many traditional restaurants around you, such as Sharzeh, Sarai Mehr, and the traditional historical restaurant Vakil, which are less than 10 minutes away.
Depending on your preferences, you can stay in traditional hotels that are old houses that have been renovated or large hotels near the Zandieh site, like Vakil and Zandiyeh Hotel. 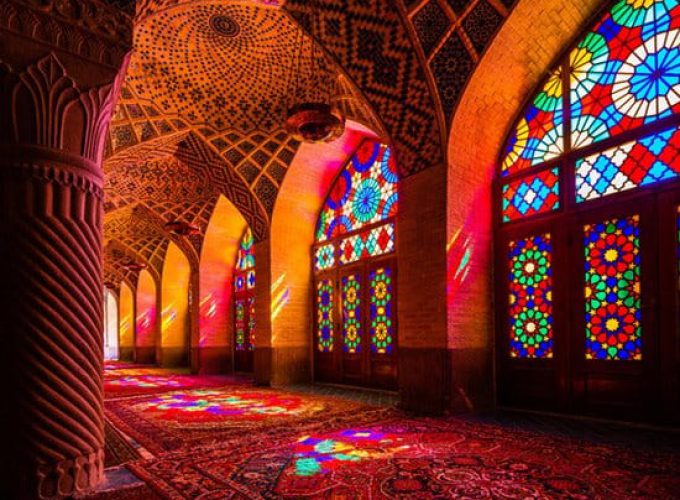