If you love Kerman and you are fond of historical garden museums join us to learn about one of the other top attractions in Kerman, Harandy Garden Museum. This site is a historic complex with a beautiful garden and two great museums. A traditional musical instruments museum, and an archeology museum. It might be interesting to know that Reza Shah stayed in this complex for a few days before his exile from Iran. 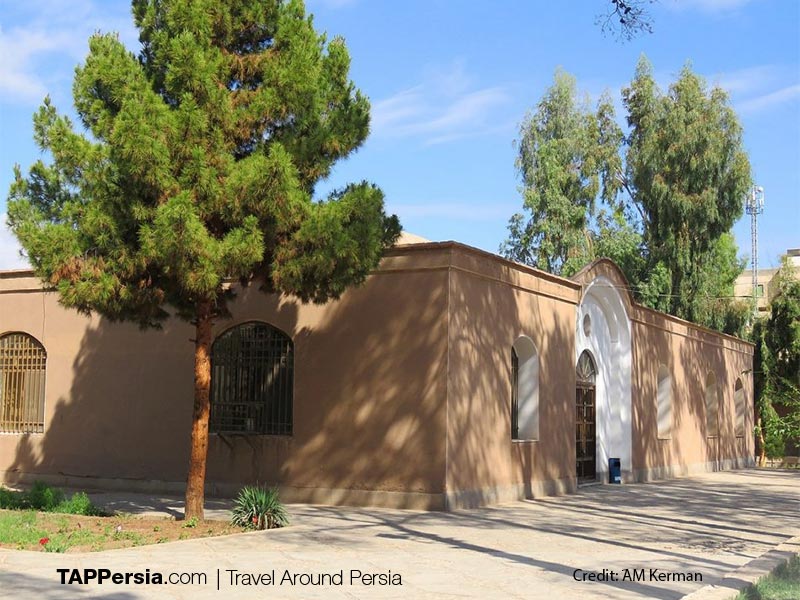 Harandy Garden Museum is a complex consisting of a garden and a Qajar building with two museums. Definitely, the complex has the features of an Iranian garden. It represents a beautiful combination of Iranian and foreign architectural elements, as well.

For 100 years, this complex hosted government men and women who were on work missions in Kerman. And then, for some time it belonged to the Kerman Cultural Heritage and Tourism Organization. But Now, Harandy Garden Museum is an important attraction that attracts lots of visitors to this amazing city.

The History of Harandy Garden Museum 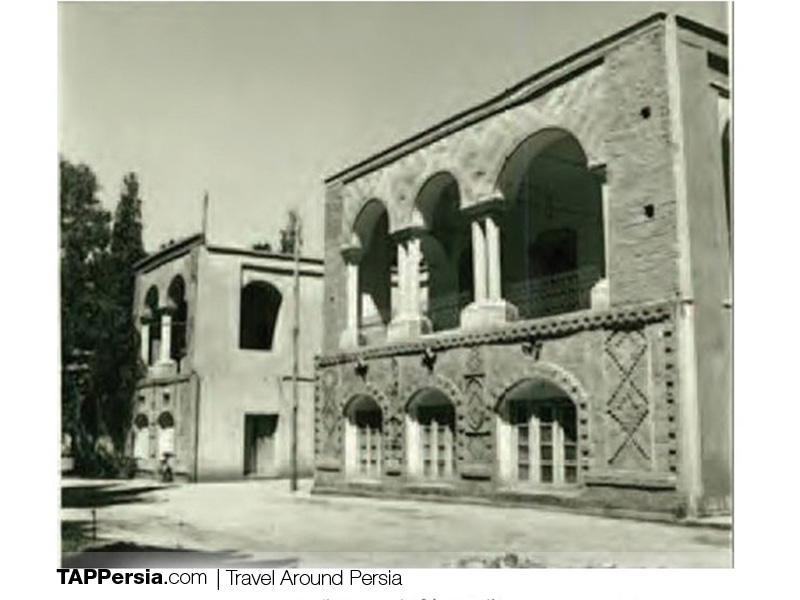 It was in 1873 and during the Qajar period that one of the military officials of Kerman, Mohammad Reza Khan Adl Al-Sultan, built a garden outside the city. The garden was 25,000 square meters and was used for recreation purposes.

In 1935, one of the merchants of Kerman, Abolghasem Harandy, acquired this garden for 40,000 Tomans. This garden became Harandy’s place of residence. Where he hosted political and military dignitaries and officials who traveled to Kerman on a mission.

Donation Of The Garden to the Museum

In 1971 Harandy donated a part of his garden and his building to create a museum. And later on, in 1975 the Ministry of Culture and Arts bought the rest of the garden. In the same year, Harandy Garden Museum was registered in Iran’s National Heritage List.

The Architecture of Harandy Garden Museum 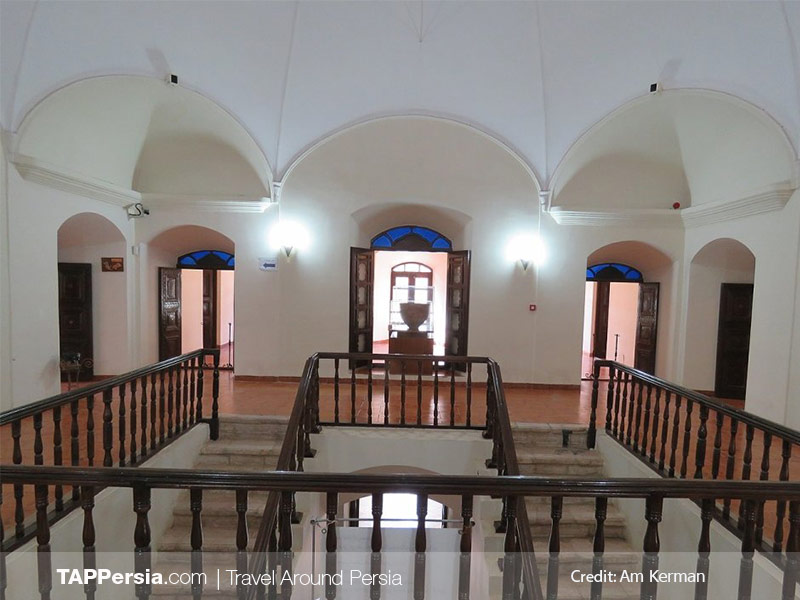 Harandy Garden Museum is an Iranian garden-mansion in every sense. Surely and totally, you can see and enjoy the Iranian gardening art in its every corner. The mansion has square and rectangular designs that are all connected together. Above all, it has a beautiful central building with a pond and fountains. 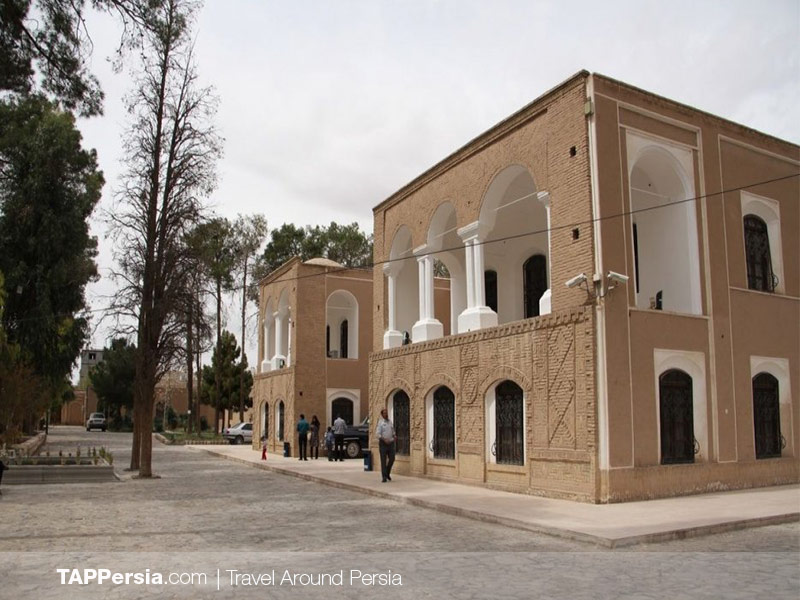 This building represents a combination of non-Iranian elements and designs plus Iranian architectural features. This two-story building with ​​about 2000 square meters area is located in the north of the garden, next to the fountains. The building has a shallow dome roof. In the center of the roof, there is a polygonal window to provide light. The floor was of old traditional brick, but today they have replaced it with ceramic. 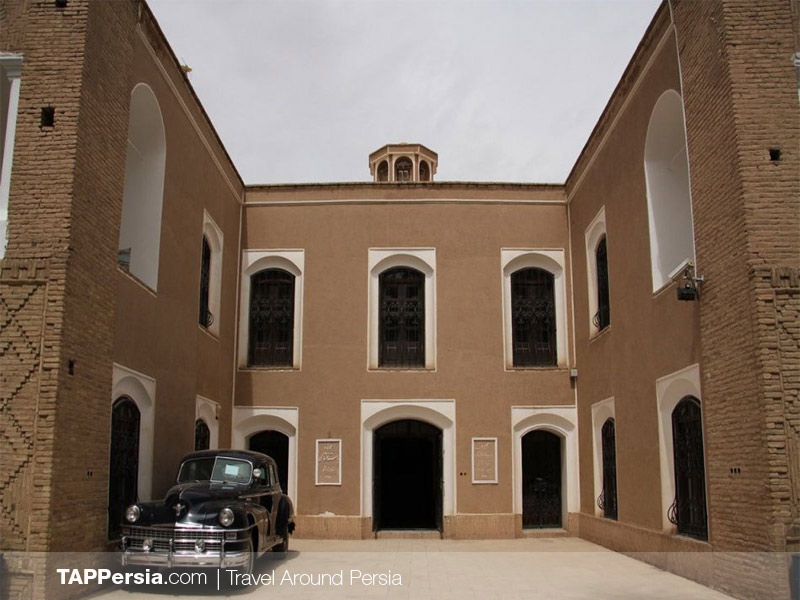 The are several rooms in the building. First, the resting hall known as “Tanbal-khaneh” is on the ground floor. Tanbal-khaneh literally means the lazy house.  Second, guest rooms, and then two covered porches on the second floor. Today each of these rooms has different uses. You can also see Mr. Harandy’s car next to the central building; a 1948 Chrysler.

In addition to the central building, there were also other buildings in the garden, including the workers’ residence building, bathroom, kitchen, stables, warehouses, and so on. Among them, stables and warehouses are not there any longer and the kitchen is turned into an office building now. 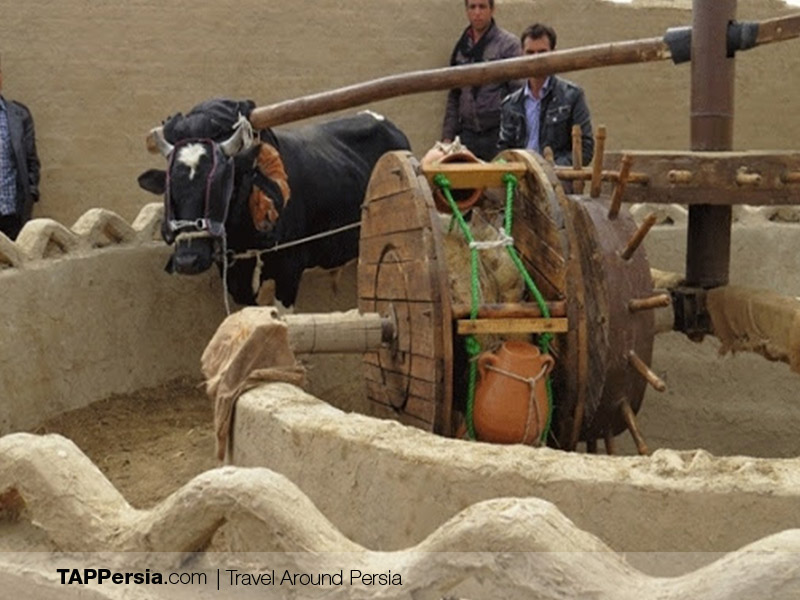 One of the remarkable parts of the Harandy garden is the Gav-gard. “Gav” means a bull and “Gard” means to turn. Some tools are attached to a bull so when he turns around the well the bucket full of water comes up. They used it to transfer water from the depths of the well to the ground. Harandy garden’s Gav-gard has a main wooden axis. Anyways, they used Gav-gard to collect water from wells into the pool. Then they used the water to water the trees. The Gav-gard and all its equipment are at the southern end of the garden, near the pool. They say, in the past, there were several rooms for the staff next to it also.

According to the Harandy family, there were two small waterways originating from two different Qanats that also flowed in the garden but unfortunately, there is no trace of them today.

There are more trees in the southern part of the garden than in the other parts. In the past, they had small rectangular plots to grow veggies. And they had a lot of fruit trees such as pomegranates, grapes, figs, berries, apples, barberries, and pears. The pines and the pomegranates are the oldest trees of the garden that are still standing tall. Today ornamental plants such as roses and annual flowers are also planted in the garden. 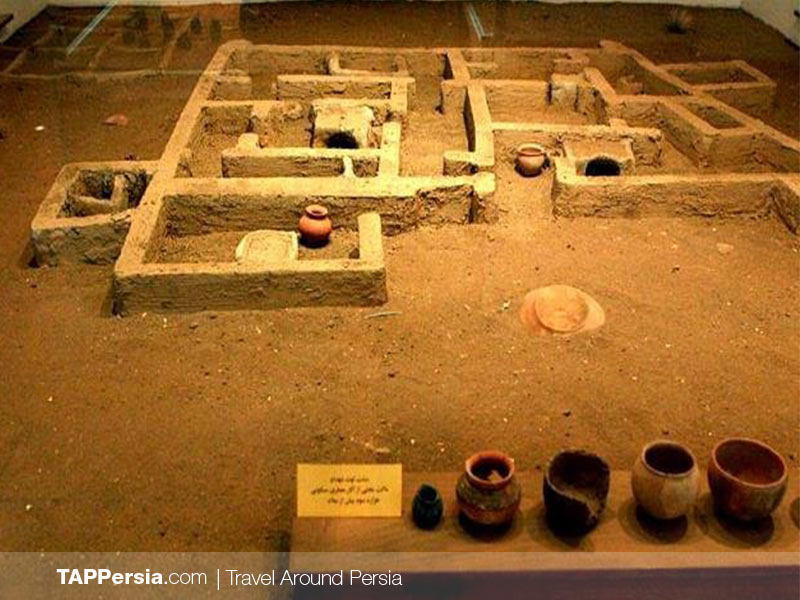 This museum introduces the ancient civilizations of southeastern Iran and their connection with the surrounding civilizations. The archeology museum is on the upper floor of the central building. There are pottery, stone, metal, and glass objects, and stone inscriptions of different centuries in this museum. Most of these valuable objects have been discovered from Halilrud (Jiroft) and Shahdad. 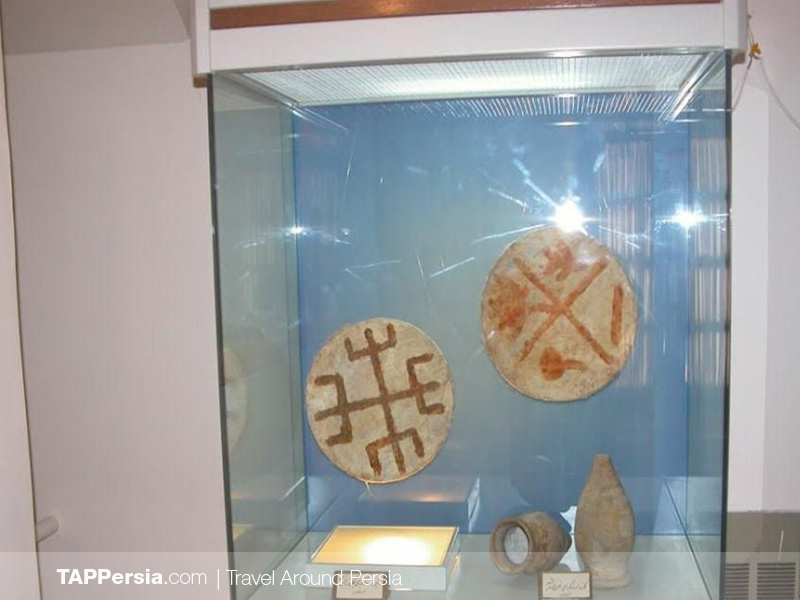 Harandy Garden Archeology Museum has two general sections of pre-Islamic and Islamic eras and includes several stalls. Join us to introduce you to some of the most important ones; 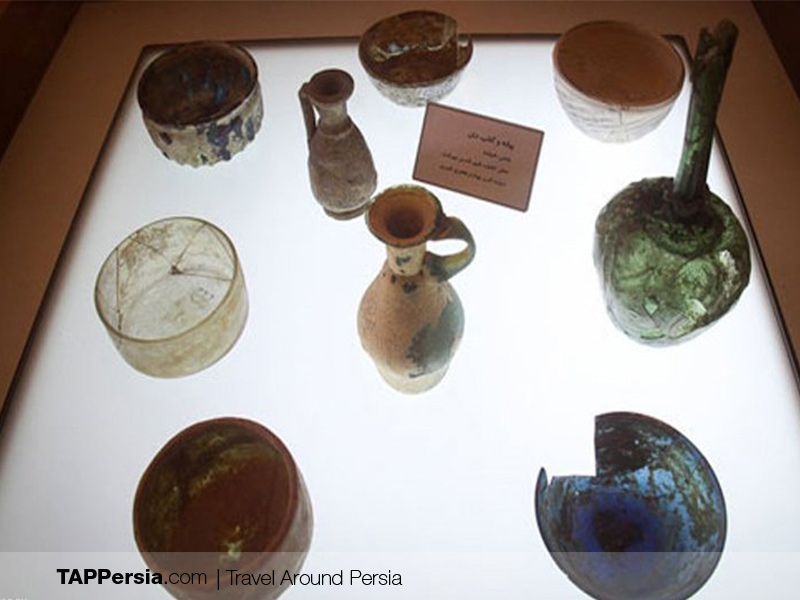 In this stall, there are archeological excavations of the ancient Shahdad. They have found all kinds of pottery, stone objects, and metal utensils (bronze) related to the third and fourth millennia BC. There are also very delicate necklaces and so on.

In this stall, there are objects discovered in the Jazmorian area. They belong to the late third millennium and early second millennium BC. You can find all kinds of delicate gray pottery with beautiful paintings on them. There are also bronze axes that they found in Jiroft and west of Jazmourian swamp. 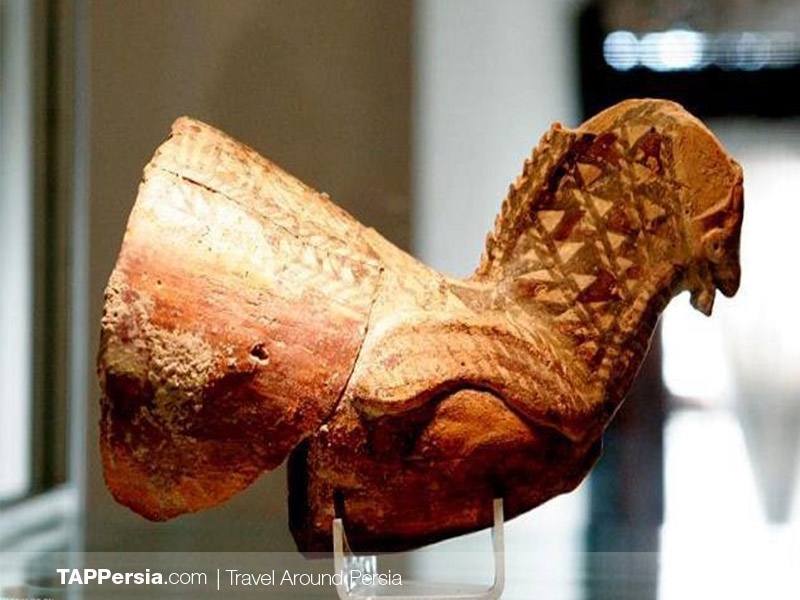 Other important artifacts from the Jazmourian region belong to the Seleucid, and Parthian. They represent a blend of cultures regarding regions like Greece, Central Asia, India, the Central Plateau of Iran, and Mesopotamia. The findings include pottery, plates, and jugs. There are also rhytons with the head of animals such as horses, rams, cows, and humans, as well. One of the most important objects in Harandy Garden Museum is the Achaemenid war horn. 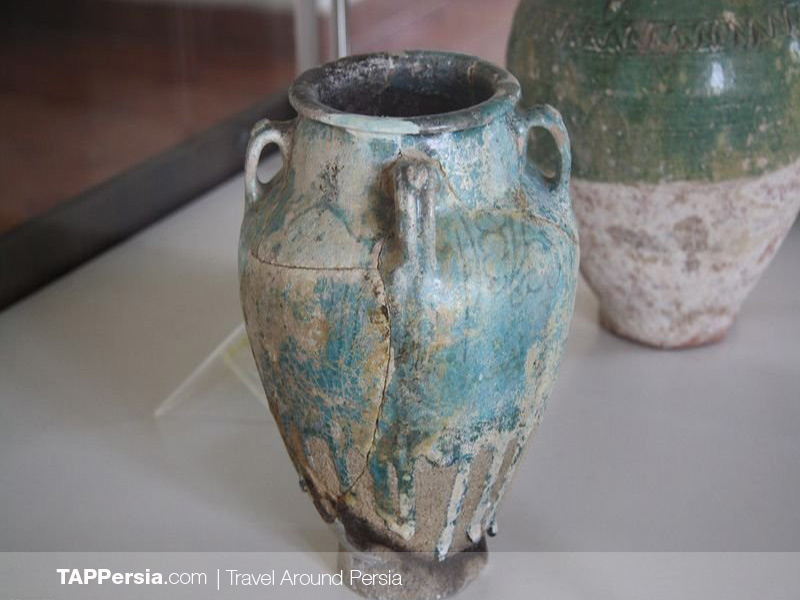 The objects of this stall belong to the Islamic period. You can see glazed pottery, various utensils, metal and glass perfume jars, stone inscriptions, etc. 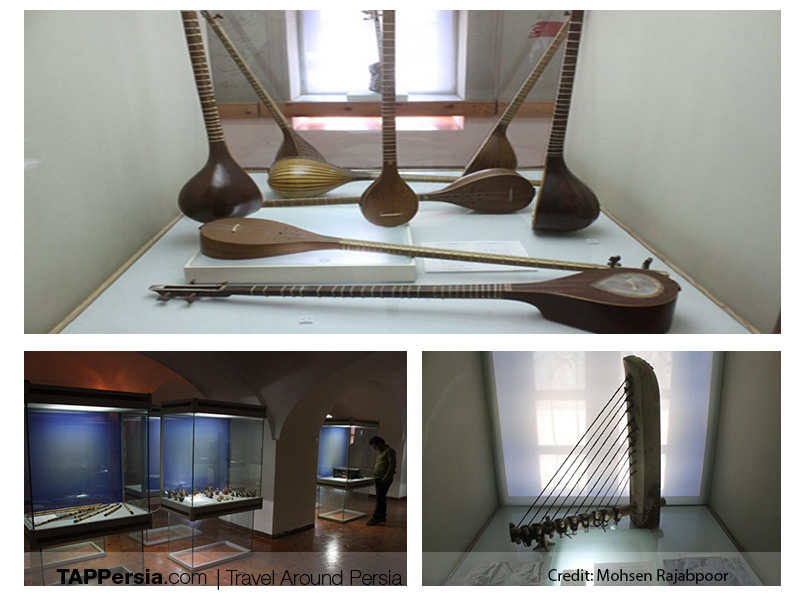 This museum is on the ground floor of the central building. The aim of building this museum was to present the native and traditional instruments of Iran and its neighbors. The Museum has 32 showcases and 250 instruments totally. There are musical instruments like Chang, Qichak, Santoor, Qanun, Robab, Tonbak, Tar, Dayereh, Tanbur of Kermanshah, Dotar of Khorasan, Kamancheh, Kozak of Bam, Ney, Barbat, Kasureh of Khuzestan, etc. 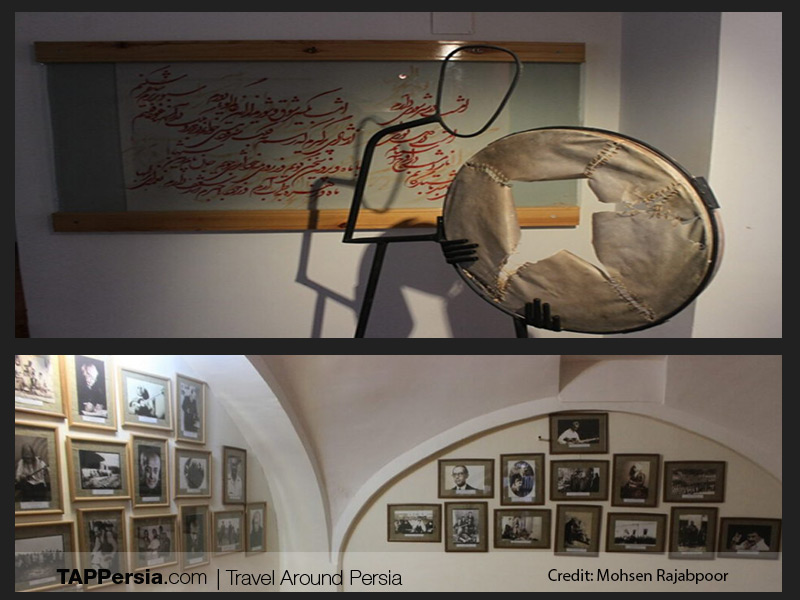 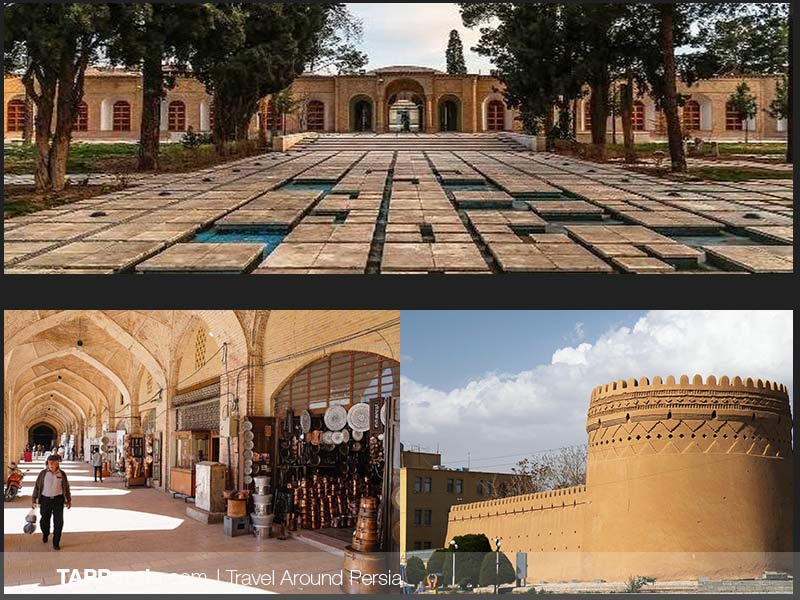 If you are looking for close attractions to this garden you can visit The Wall of Kerman, Kerman’s Bazaar,  and Kerman’s Museum of Contemporary Industrial Art in less than 3 kilometers.

I hope you have enjoyed our short trip to Harandy Garden Museum of Kerman. If so please let us know in the comments. For more information or booking a tour, you can use the contact info at the end of this page. 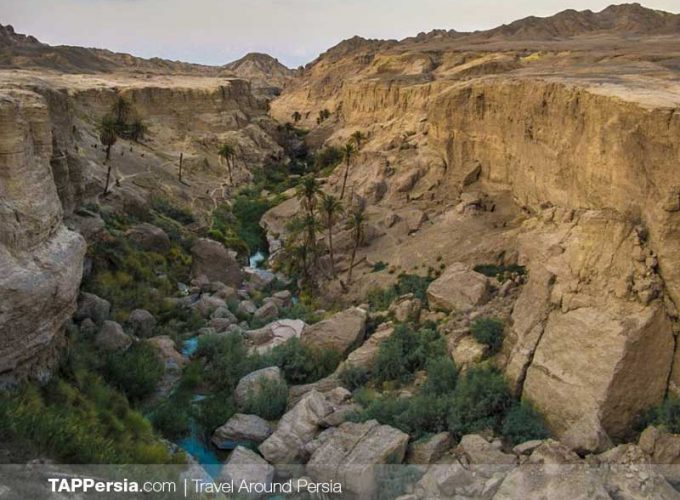 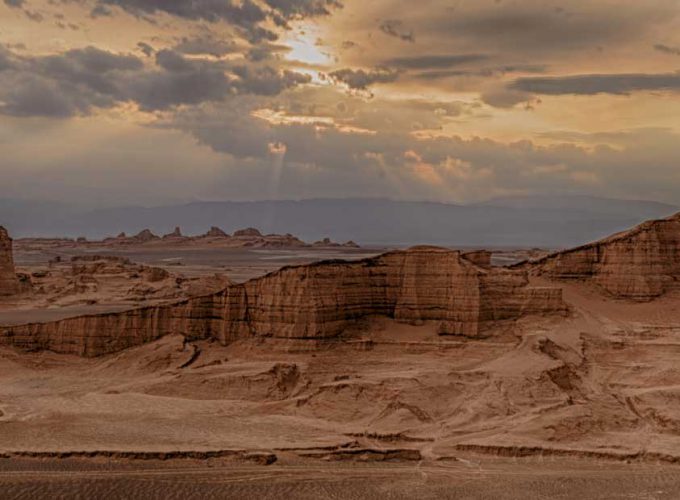