One of the most significant buildings listed among UNESCO World Heritage sites is the magnificent and glorious Golestan palace, or Kakh-e Golestan, located in the heart and historic district of Tehran. This splendid palace represents a unique style for its time, incorporating traditional Persian arts and crafts with elements of 18th-century Western architecture and technology. A beautiful Garden, a marvelous palace, and lots of museum details to see, you’ll spend a wonderful time with no doubt. 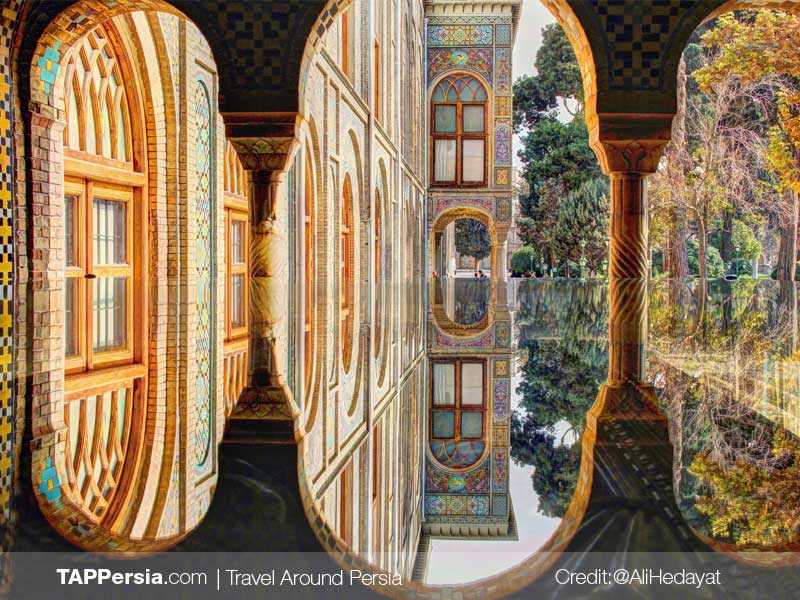 From Safavid to Pahlavi – Palace of Different Dynasties

The Golestan Palace was built during the reign of Tahmasp I in the Safavid era in the 17th century. Then, Karim Khan of the Zand dynasty renovated the magnificent palace to make it even more glorious than it was. The time passed and when Agha Mohammad Khan of the Qajar dynasty chose Tehran as his capital, the Golestan Palace became his seat. The current form you get to see is from the rebuilding the palace during the time by the famous Iranian architect, Hassan-e Memar. At the reigning time of the Pahlavi era, this glorious palace became a place for formal royal receptions and Niavaran Palace became the resident of Pahlavis. 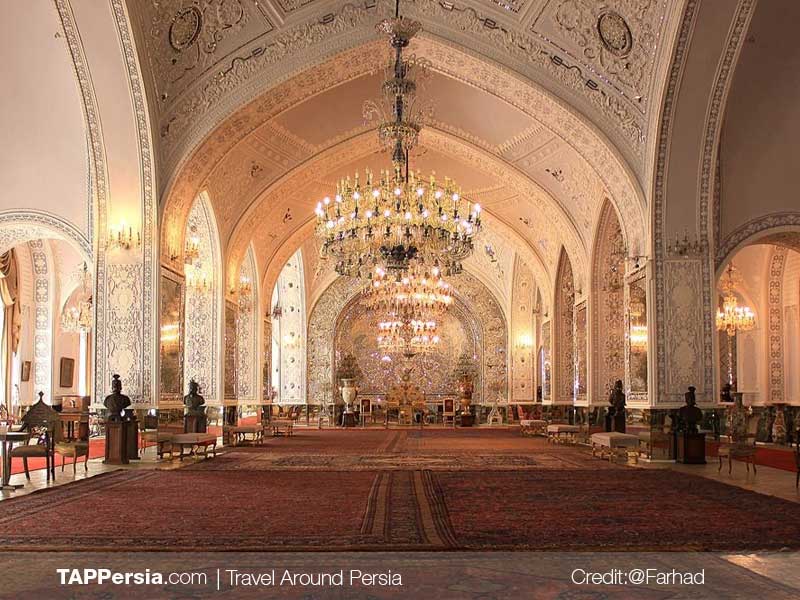 What to See in the Golestan Palace

The entire complex of Golestan Palace includes 17 structures containing palaces, museums, and halls which were used for coronations and other important celebrations. It also consists of three main archives, including the photographic archive, the library of manuscripts, and the archive of documents.

Let’s go over some of these must-see parts of Golestan Palace in detail which are more famous:

This astonishing terrace was built in 1806 by the order of Fath Ali Shah of the Qajar dynasty. The throne itself embodies the finest of Iranian architecture along with all the tile-work, marble carving, paintings, and lattice windows. Takht-e Marmar is situated in the middle of the terrace (iwan) and is made of the famous yellow marble of Yazd. 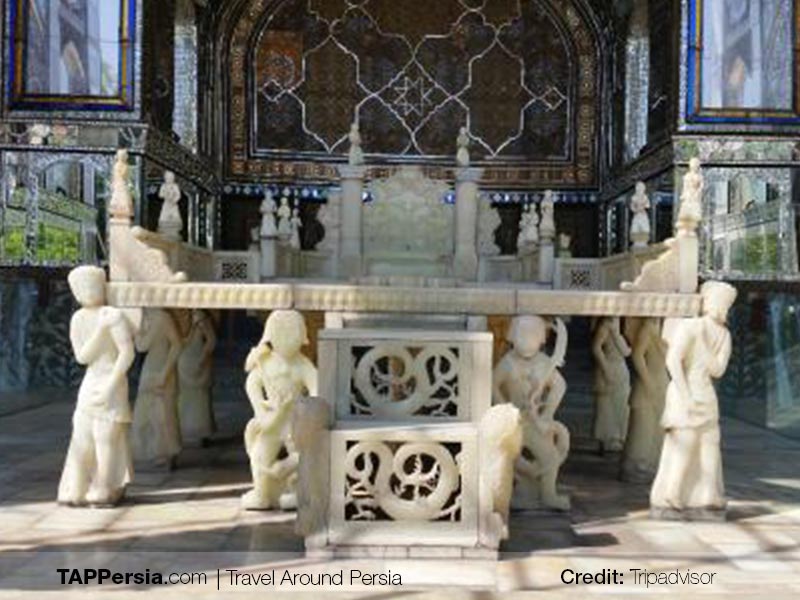 The throne is made of sixty-five pieces of marble and was designed by Mirza Baba Naqash Bashi, the head painter of the Qajar court. The details of this marvelous throne and other ornaments of the terrace were completed afterward, during the reigns of Fath Ali Shah and Naser al-Din Shah. The formal ceremonies and coronations of Qajar kings were all held on this splendid terrace during the time. The last coronation to be held at the Marble Throne was the coronation of Reza Shah of the Pahlavi dynasty.

As the name presents, this spot dates back to 1795, when this palace was the residence of Karim Khan of the Zand dynasty. There used to be a pond in the middle of this terrace with a fountain. It is said that Naser al-Din Shah of Qajar loved this corner. He spent his resting time here. You cannot notice the marble gravestone of this Qajar king who found his peace forever in this quiet corner. 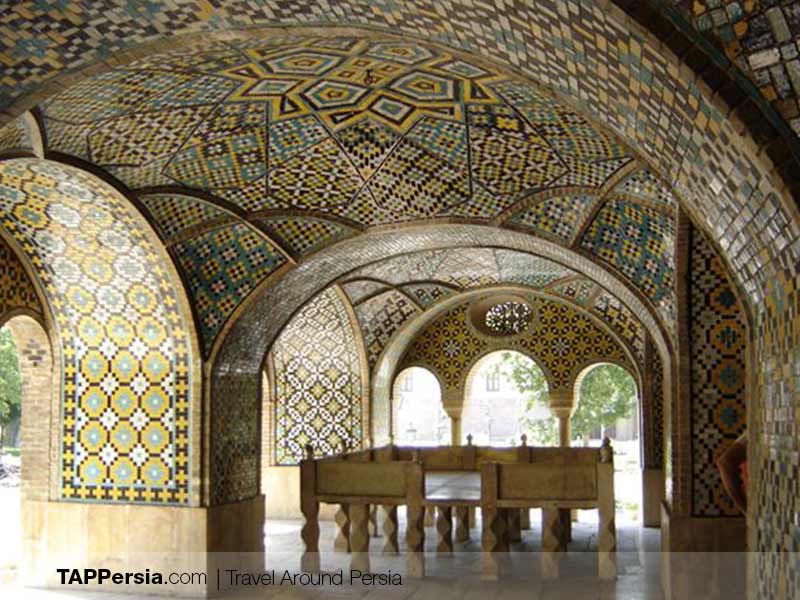 The Brilliant Hall was named so for it awe-standing brilliant mirror work of Iranian artisans. The hall was built by the order of Naser al-Din Shah to replace another hall called Talar e Bolour (The Crystal Hall) which was built by the order of Fath Ali Shah. The Crystal Hall had been laid waste by the damp, that was the reason Naser al-Din Shah gave to order to build a new magnificent hall. 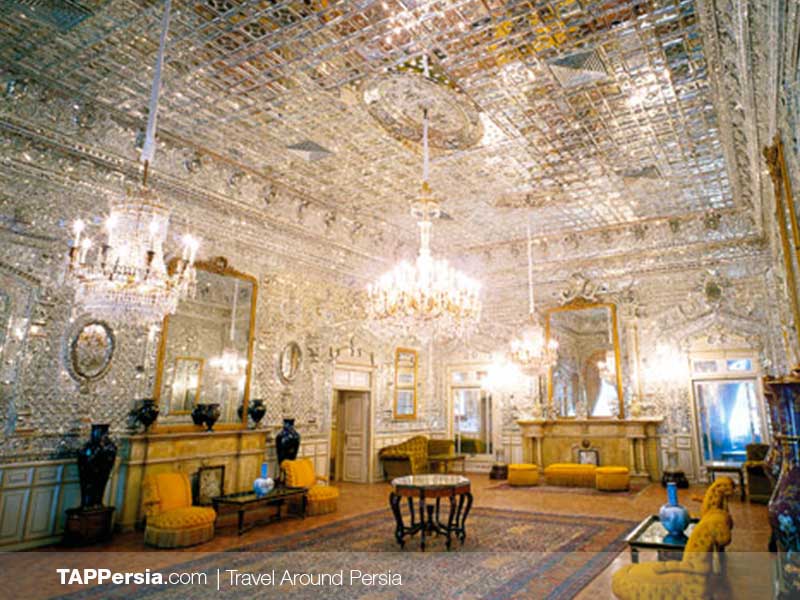 The most famous hall in the Golestan Palace and mostly the reason that brings tourists to this palace is the Mirror Hall. This relatively small hall is famous for its splendid mirror work. The hall was designed by Haj Abd-ol Hossein Memar Bashi, known as, Sanie-ol-Molk. The moment you enter this awe-inspiring hall you will feel like you are standing in the middle of a painting. Look around and enjoy this dream-like hall inside Golestan Palace. 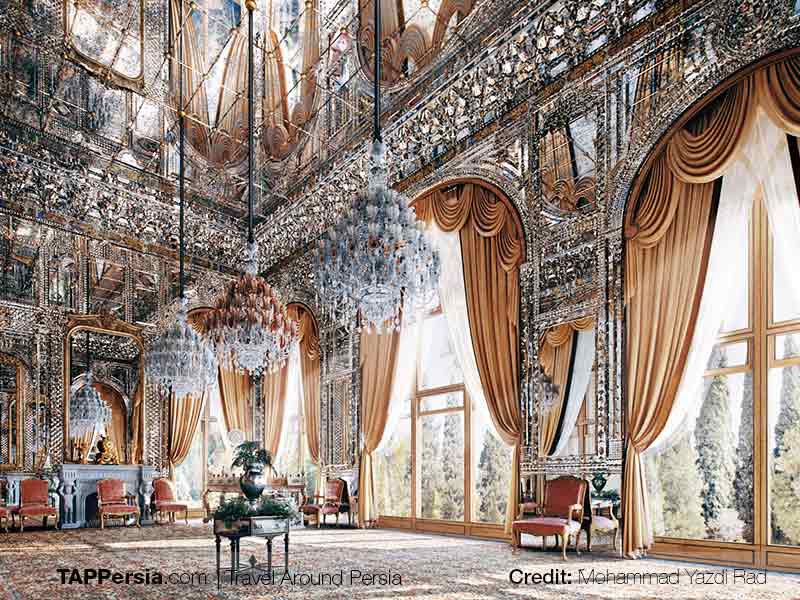 After 400 years of construction and renovation, Golestan Palace was submitted as a UNESCO World Heritage Site in 2013. Several criteria have been met to allow Golestan Palace to be placed in the UNESCO world heritage list. Golestan Palace is the most prominent example of Persian art and architecture throughout Iran’s process of modernization in the 19th century. The building combines elements of perfected late Qajar era art with the emerging European styles of the time. 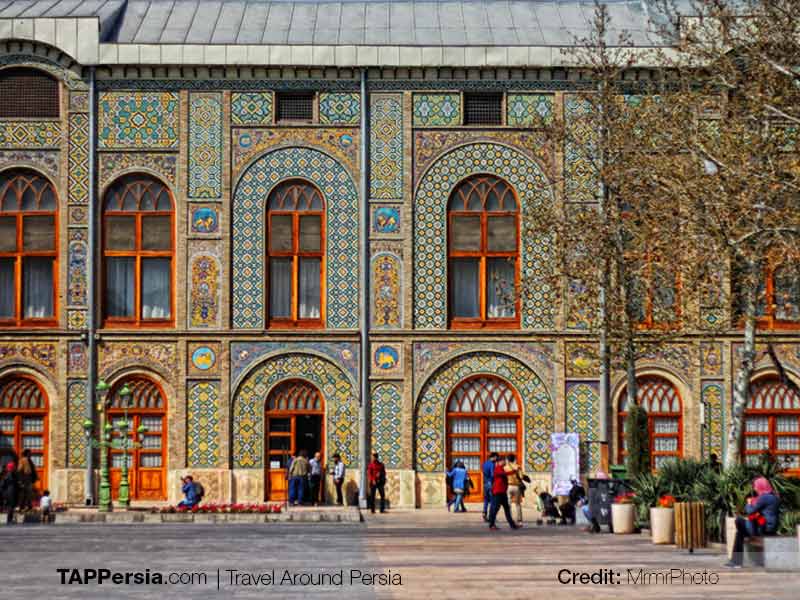 The first criterion that was checked was the palace’s unification of Persian arts and architecture with European styles and motifs alongside the adaptation of European building technologies. At a time when Iranians were establishing closer relations with their European counterparts, the Golestan Palace stood as a symbol of the merging of these two different worlds.

The second exceptional criterion is the palace’s extreme level of artistic value. Not only does the palace feature the most lavish and detailed motifs and styles of the Qajar era, but it is also often quoted as the peak of Qajar art. Even though many parts of the palace were destroyed and renovated by future monarchs, what remains today has got to be the best-kept artforms from that time period.

The third criterion is the actual buildings of the Palace. The building itself was made using both traditional Iranian architecture and engineering along with modern European construction methods and materials. Being the first building to feature these new construction elements, the building is a highly unique symbol of Iran’s transitional period.